Back in January, U.S. District Court Judge James Robart ruled that the City of Seattle was in “full and effective compliance” with the consent decree that it signed with the Department of Justice over police misconduct. That declaration kicked off a two-year “sustainment period” in which the city must show that it can fully implement the remainder of its plan and remain in compliance with the consent decree. Last Friday, the City submitted its plan for what will happen over the next two years.

The plan, which was agreed to with the DOJ and the court-assigned police monitor, involves ongoing assessments connected to seven quarterly reports beginning in July 2018. Each report will summarize developments over the previous three months and include reports from audits, assessments, policy reviews and outcome reports completed during that period. The city says the reports will detail:

The final report will be due in January 2020, which marks the end of the two-year sustainment period, and if the city successfully runs the gauntlet it would then petition the court to terminate the consent decree. However, if it misses the mark on any of the quarterly assessments, the court could reset the two-year clock.

Here’s the schedule for what is to be included in each of the quarterly reports: 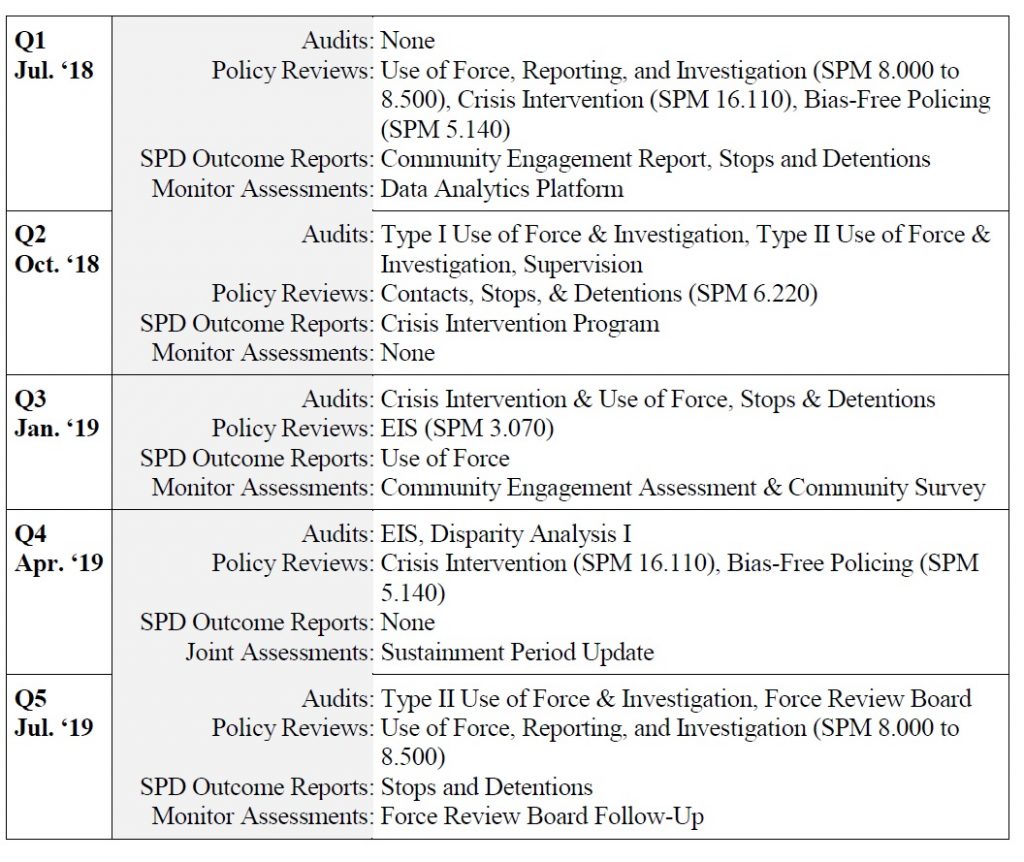 Along with this, the city submitted a ridiculously detailed, 29-page calendar for all the audit, assessment and reporting milestones that needs to be met between now and January 2020, covering:

These are generally the same topics used by the police monitor for assessments during Phase I of the consent decree.

Both the DOJ and the police monitor expressed their support for the plan as submitted. However, Judge Robart has shown in the past that he intends to make up his own mind rather than simply rely on the good word of the other parties to the consent decree, so he may grill the city over the details before he approves the plan. In particular he has expressed concern over the effect that the unresolved labor negotiations with the Seattle Police Officers Guild will have on the city’s police accountability legislation; he is still withholding his approval of the legislation until a contract is in place that doesn’t conflict with the consent decree, and if negotiations continue to be stalemated he may eventually lose his patience.

As for today, however, the city has delivered on the plan that Judge Robart asked for, and the sustainment period seems to be moving forward apace. Let the paperwork begin!