Earlier this week, Council member Kshama Sawant held a discussion in her committee to push for some revisions in how the city reports on scheduled encampment cleanups.

According to a budget proviso that the Council passed last fall, once a week the city must send to the Council a list of all the encampment removals scheduled for the following week. The proviso specifies the information that must be provided in those weekly reports:

Here’s a copy of what one of those reports looks like (this one was for the week of February 26-March 2): 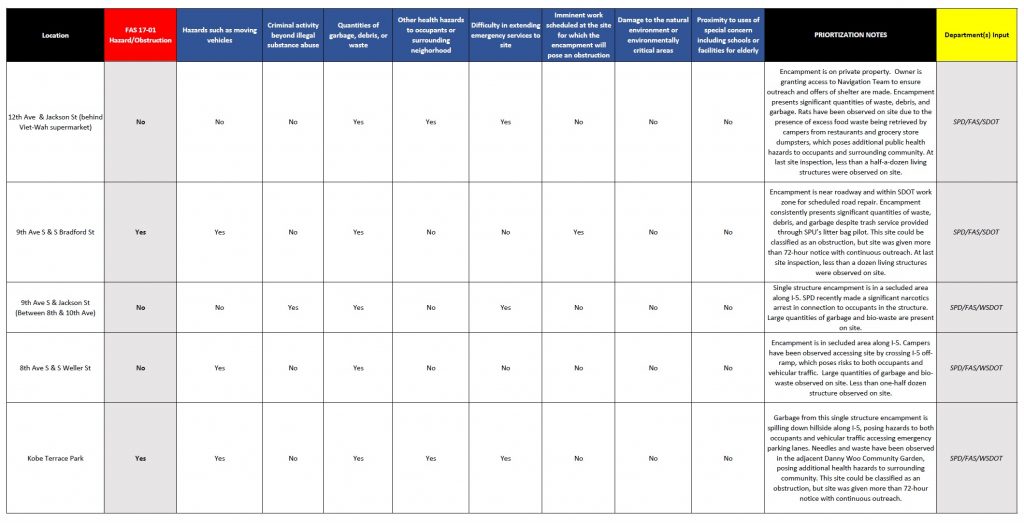 Each row lists a specific scheduled removal. The columns list the criteria used for prioritization, and come directly from the city’s adopted rules for encampment cleanups and are repeated in the proviso:

(1) Objective hazards such as moving vehicles;
(2) Criminal activity beyond illegal substance abuse;
(3) Quantities of garbage, debris, or waste;
(4) Other active health hazards to occupants or the surrounding neighborhood;
(5) Difficulty in extending emergency services to the site;
(6) Imminent work scheduled at the site for which the encampment will pose an obstruction;
(7) Damage to the natural environment of environmentally critical areas; and
(8) The proximity of homeless individuals to uses of special concern including schools or facilities for the elderly.

Nevertheless, Sawant complained that in practice she and the activists and advocates tracking the city’s encampment cleanups (aka “sweeps”) find this information less than helpful — in the context of their efforts to prove that sweeps are ineffective and inhumane. Of course, the reporting wasn’t designed to prove that, but rather to provide transparency over whether the city was, in fact, following its own rules that were tensely negotiated a year and a half ago between the Council and the Mayor. That said, the reports are a bit terse and Sawant is right that some of the “yes” answers could use further explanation. Council member Herbold noted that on several of the weekly reports she has asked for more information, and she found city staff to be very proactive and helpful in providing answers; in fact, the number of structures on the site was added to each site’s description in the weekly report by request of Council members.

The weekly report doesn’t try to recap the prior week’s results; those are detailed on the city’s web site, with a “site journal” for each cleanup that fully documents the site condition, posting of notices, outreach, cleanup process, post-cleanup conditions and what belongings were stored  (here’s an example site journal).

The city is also allowed to remove encampments that are “hazards” or “obstructions” almost immediately and without scheduling or posting notice, and those generally aren’t captured by the weekly report of scheduled cleanups or in the site journals. They are tracked in a database, however, from which reports can be generated on demand, though Navigation Team spokesperson Will Lemke said that they don’t do many of them because they simply don’t have the people or infrastructure. City staff gave me a report of all encampment cleanups — scheduled and otherwise — listed in their database since the beginning of the year, which includes 31 scheduled cleanups and 6 additional hazard/obstruction removals. Lemke noted that some of the scheduled cleanups in the list actually met the criteria for immediate hazard/obstruction removal, though the city chose to take a slower approach, give the residents 72 hours’ notice, and provide outreach. 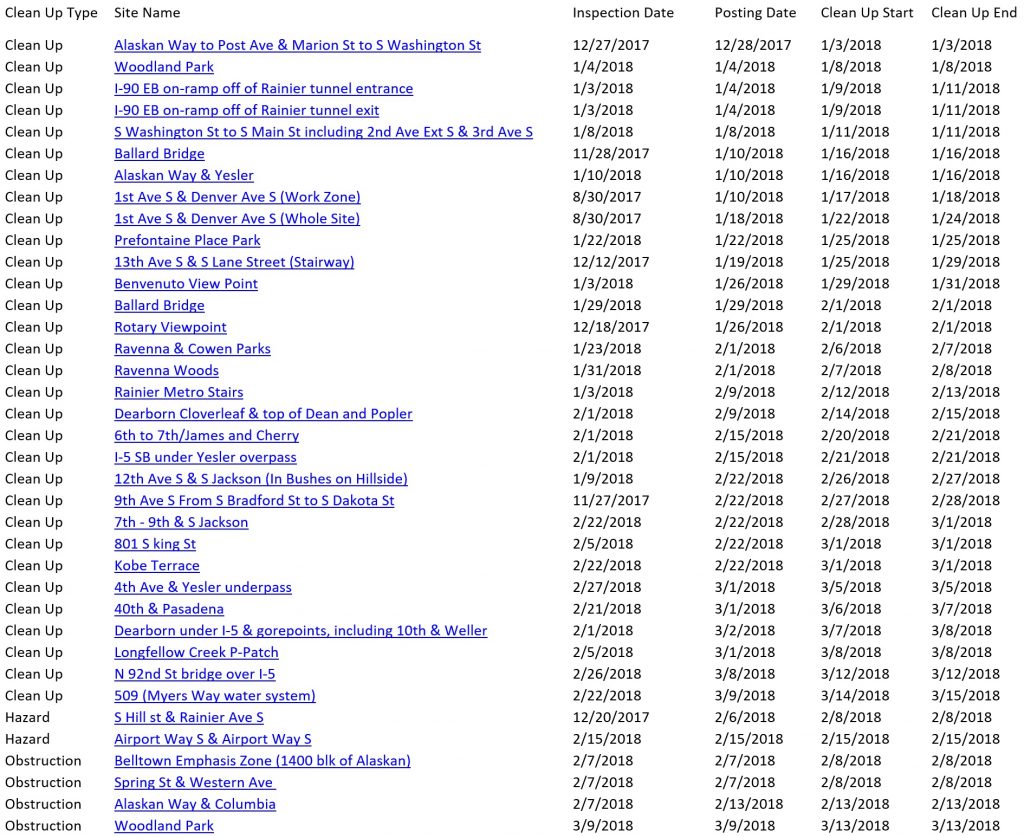 The budget proviso also requires the city to complete a review of its encampment removal protocols and report back to the Council by April 6:

Furthermore, the Council intends that the Executive shall review MDAR 17-01 and FAS 17-01 protocols to improve the unauthorized encampment removal process and reduce harm to unsheltered individuals and provide a report by April 6, 2018, to the Chair of the Human Services and Public Health Committee and Council Central Staff Director. Recommendations for changes to the existing policies, proposing new policies, or legislation should also consider input from the Advisory Committee on Implementation of Rules of Removing Unsanctioned Homeless Encampments and the Office of Civil Rights’ encampment monitoring reports.

Lemke told me that the city is on track to meet that deadline. City officials have been working with the MDAR Advisory Committee on the review, and there are several interesting presentations on the committee’s web site including this one specifically discussing the protocols’ effectiveness in practice and this one on the status of the Racial Equity Toolkit evaluation of the encampment removal process.

One of the more challenging parts of reviewing the city’s encampment cleanups seems to be reconciling anecdotal reports with the published data. Sawant’s office receives reports from activists and advocacy groups of cleanup operations, but they haven’t come forth and identified any cleanups that weren’t documented. Her office does claim that they have heard several anecdotes of homeless persons who received referrals to shelter from the Navigation Team, then went to the shelter and were told that it was full. Lemke disputed that, both in Sawant’s committee hearing and in his conversation with me. He claims the Navigation Team calls down shelters to confirm the outcome of every referral, and tracks that data. In many cases it’s easy to track, because the most popularly referred locations (The Navigation Center, the Compass-1st Presbyterian low-barrier shelter, the Licton Springs sanctioned encampment and the Georgetown sanctioned encampment) exclusively receive referrals from the Navigation Team.

It’s clear that beyond the weekly reports the Council is keenly interested in the details of encampment cleanups to ensure that they are effective, humane, and attached to meaningful offers of alternative shelter. The report due April 6th will be additional fodder for that conversation. But at the moment the city is claiming that it’s doing everything required of it: following the MDAR protocols, filing weekly reports with the Council on scheduled cleanups, and working with the MDAR Advisory Committee on further improvements. And so far Sawant’s office has yet to provide evidence to the contrary, despite their best efforts to show that the sweeps are causing more harm than good.