This morning the City Council once more took up some proposed changes to the city’s anti-discrimination code to make explicit prohibitions against sexual harassment and extend the statute of limitations for filing a complaint. After making a further amendment, the bill was voted out of committee but put on a slow train to full Council approval to allow for some additional analysis and community outreach.

Last month when the Council first took up the bill in committee, it discussed the double-edged sword of defining sexual harassment in the code: it makes clear what counts as sexual harassment, but it might create conflicts with existing case law. Today Council member Lisa Herbold addressed that issue by introducing an amendment to strike the definition of “sexual harassment” from her bill — allowing the case law to have the final word. Nevertheless, the bill still explicitly calls out sexual harassment as a form of discrimination, though Herbold’s amendment also now includes racial harassment and “harassment based on other protected classes.”

That amendment passed unanimously in committee and the Council members present (Herbold, O’Brien and Sawant) were ready to send the bill on to the full Council for final approval. But the Office of Civil Rights (SOCR) asked Herbold to delay the final vote for four weeks so that it could finish its stakeholder engagement process. SOCR said it typically takes two to four months for full policy development work, but in this case is expediting the community outreach component to meet “the legislation’s current trajectory and timeline.”  SOCR submitted a week-by-week plan for its community engagement on the bill. 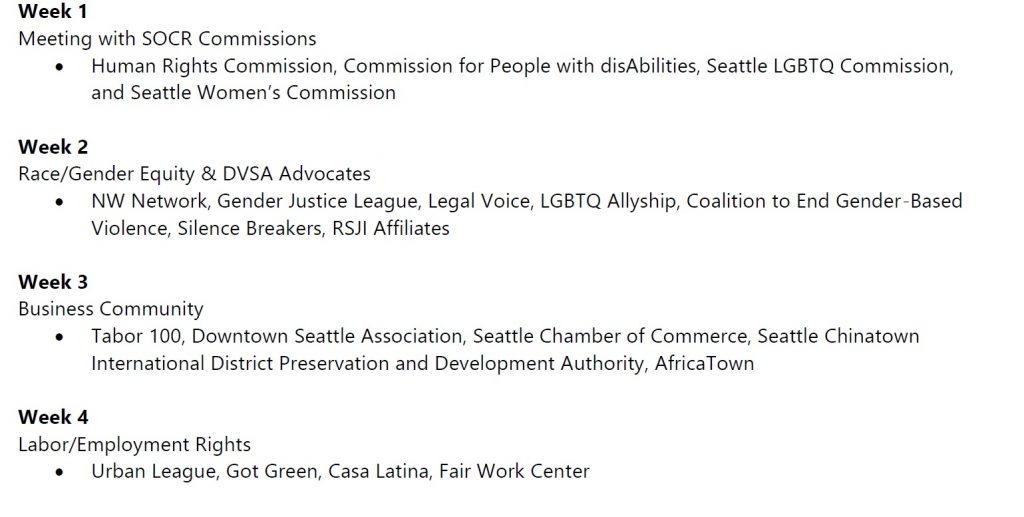 Herbold assented to SOCR’s request, and moved the bill out of committee with a scheduled date of May 7 for its final approval vote.