Last fall when the City Council wrote the budget for 2018, it inserted a proviso on funding for removal and cleanup of unsanctioned homeless encampments. That proviso requires all such funding to be spent in conformance with the Multi-Department Administrative Rule (MDAR) established in January of 2017 that specified the specifics of how cleanups should be carried out.

The proviso also spoke to the unease that some of the Council members feel toward that MDAR, and demanded that the executive branch review it and recommend changes by:

Furthermore, the Council intends that the Executive shall review MDAR 17-01 and FAS 17-01 protocols to improve the unauthorized encampment removal process and reduce harm to unsheltered individuals and provide a report by April 6, 2018, to the Chair of the Human Services and Public Health Committee and Council Central Staff Director. Recommendations for changes to the existing policies, proposing new policies, or legislation should also consider input from the Advisory Committee on Implementation of Rules of Removing Unsanctioned Homeless Encampments and the Office of Civil Rights’ encampment monitoring reports.”

That report was due last Friday. And it now looks like we won’t see it until the end of July.

Late last month, the Advisory Committee co-chairs sent a letter to the Council asking that the deadline be extended to July. They noted that at their April 3rd meeting the city was scheduled to present its draft recommendations, and the Office of Civil Rights was also scheduled to report on its monitoring of encampment cleanups through December of last year. The co-chairs pointed out that they only meet quarterly and proposed to complete their feedback on the city’s draft recommendations by July 20. 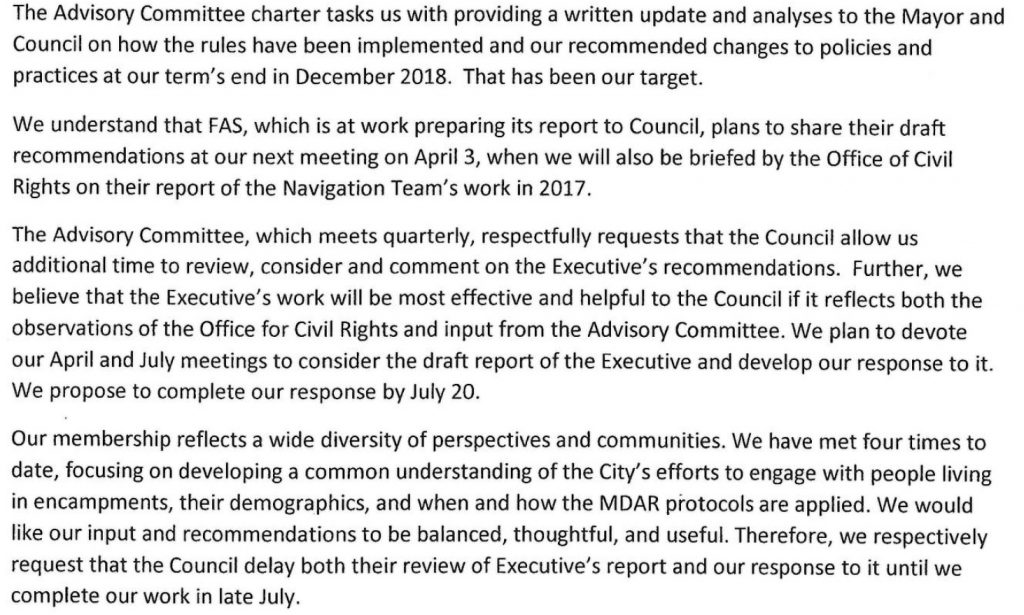 Both the scheduled presentations did in fact occur last week. The Office of Civil Rights also published a written monitoring report, which raises several issues:

The city’s presentation provided an overview of the MDAR rules, then presented the issues its own review raised and a handful of recommendations for changes. Many of the issues the city raises aren’t problems with the rules themselves as much as challenges in trying to live within them and make everyone happy. They point out that the number of complaints about homeless encampments has risen dramatically in recent months — over 1000 in March alone. At any given time they are tracking around 400 encampment sites across the city, while in the last six months of 2017 they removed 97 encampments. 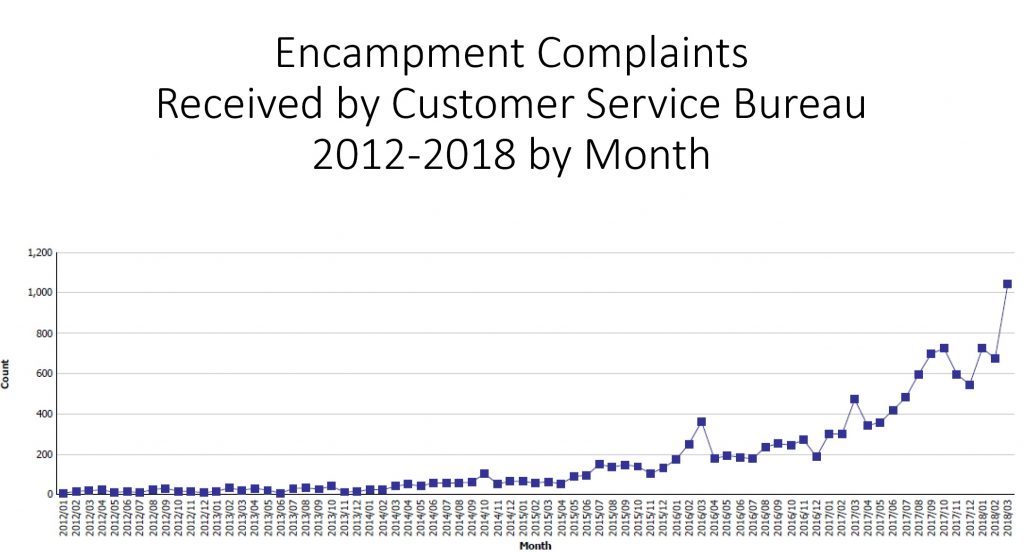 The city raised several issues related to how cleanups are prioritized, a topic that everyone has a strong opinion on. The MDAR dictates a set of criteria but is not prescriptive in how they should be applied, so the Navigation Team must exercise discretion. The team would prefer a more “quantitative” approach, certainly in part to get it out of the crosshairs (and crossfire) of everyone who has their own thoughts on what the ideal prioritization should be. At the same time, neighbors have expressed frustration at long-term encampments that remain low priority, and that the criteria don’t prioritize natural areas of parks and greenbelts that are not designated critical areas. The city also said that it is having difficulty coordinating encampment cleanups with scheduled infrastructure maintenance work. 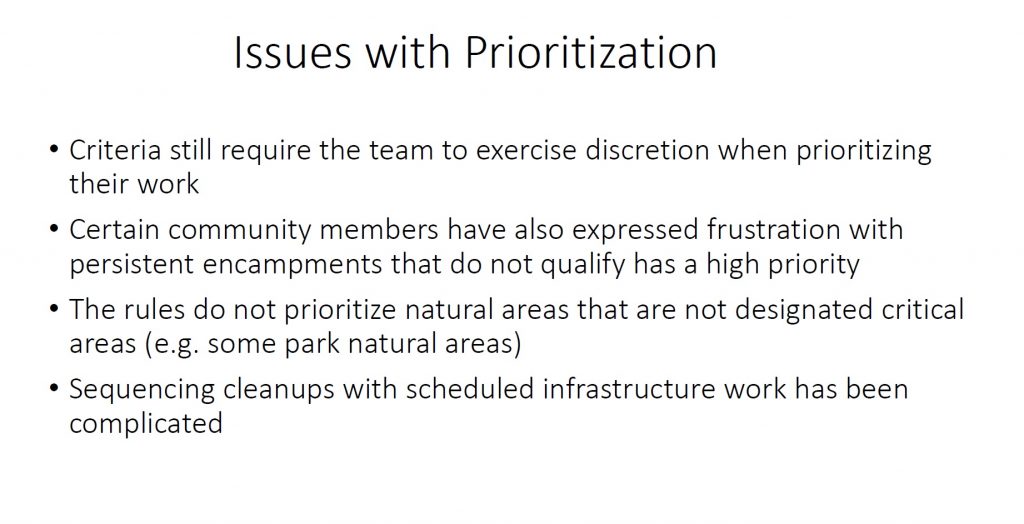 The city’s review also touches on the Navigation Team’s ability to provide appropriate alternatives. Raising a point that has become well-known in City Hall, it points out that with the current set of low-barrier enhanced shelters at capacity and little affordable housing for the shelters’ current residents to move to, the Navigation Team has limited options to offer encampment residents; that has become the chief constraint on the number of encampment removals the city performs.

The city also is recommending a tweak to the rules for retrieval of stored personal belongings. The MDAR requires the city to deliver belongings, at the owner’s request within 24 hours, but city personnel have found that to be too restrictive for many people retrieving their belongings and would like to extend the timeframe for scheduling a delivery if the owner so requests.

The MDAR allows the city to designate up to ten “emphasis areas” where they are allowed to inspect and clean daily if necessary. Personnel have found daily inspections to be “impractical” and have resorted to using the regular encampment cleanup protocol instead when encampments return.

The review also notes that the use of fencing wasn’t addressed at all, but that the Council set criteria recently in response to the city’s use of “hostile architecture” to keep homeless people from setting up encampments in certain places. 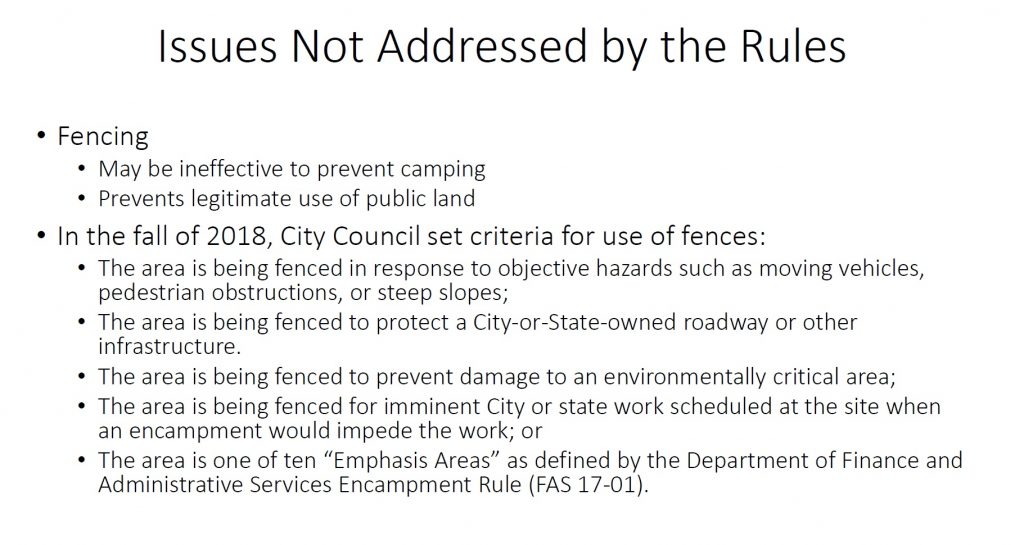 In the end, the city’s recommended list of changes is fairly short, touching on the major points above. It claims that it is moving forward with many of these recommendations already rather than waiting for explicit approval. 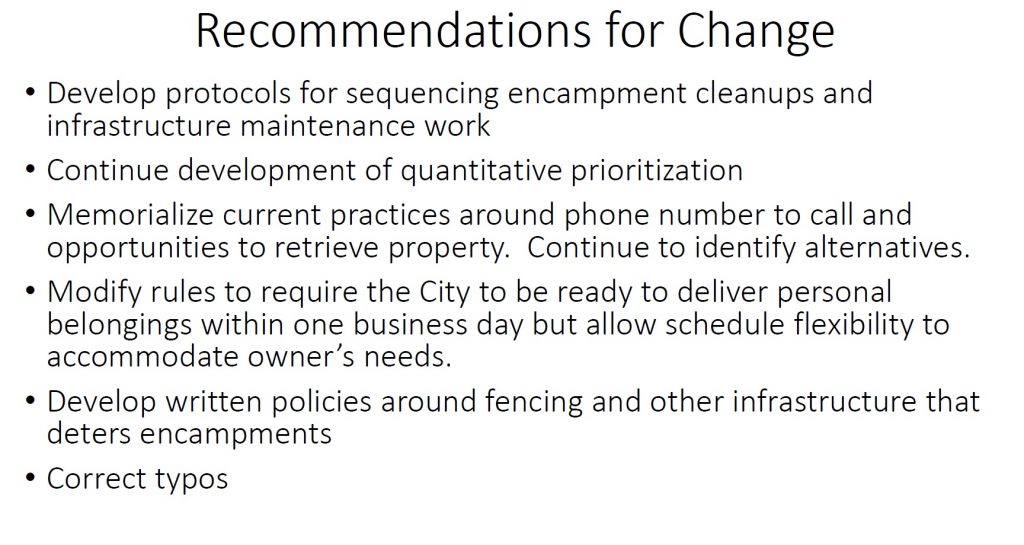 No doubt the Advisory Committee would like to address the prioritization issue in greater detail, and will probably weigh in on the other issues the SOCR raised in its monitoring report that are technically outside the scope of the MDAR rules. But we will need to wait until July to hear more about that.

I reached out to Council member Sawant and Council President Harrell for comment on the proposed delay; neither responded.