This week was the deadline for Council members to file their annual financial disclosure forms. Council member Sawant’s filing this year adds additional information than it did in the past, and in so doing challenges us to “follow the money.” You won’t like where it goes.

Here are the new things she disclosed this year:

Why is this important? Because Sawant claims that she only accepts an “ordinary worker’s salary” and gives the rest of her City Council salary to a “solidarity fund” to help build social justice movements.

Despite promises that she would give a full and current account of where the solidarity fund money is being spent at the end of every year, as of mid-February this year the information hadn’t been updated in two years. After several weeks of badgering Sawant’s office, they finally updated the web page with a list of who she decided to fund. Here’s the 2017 list: 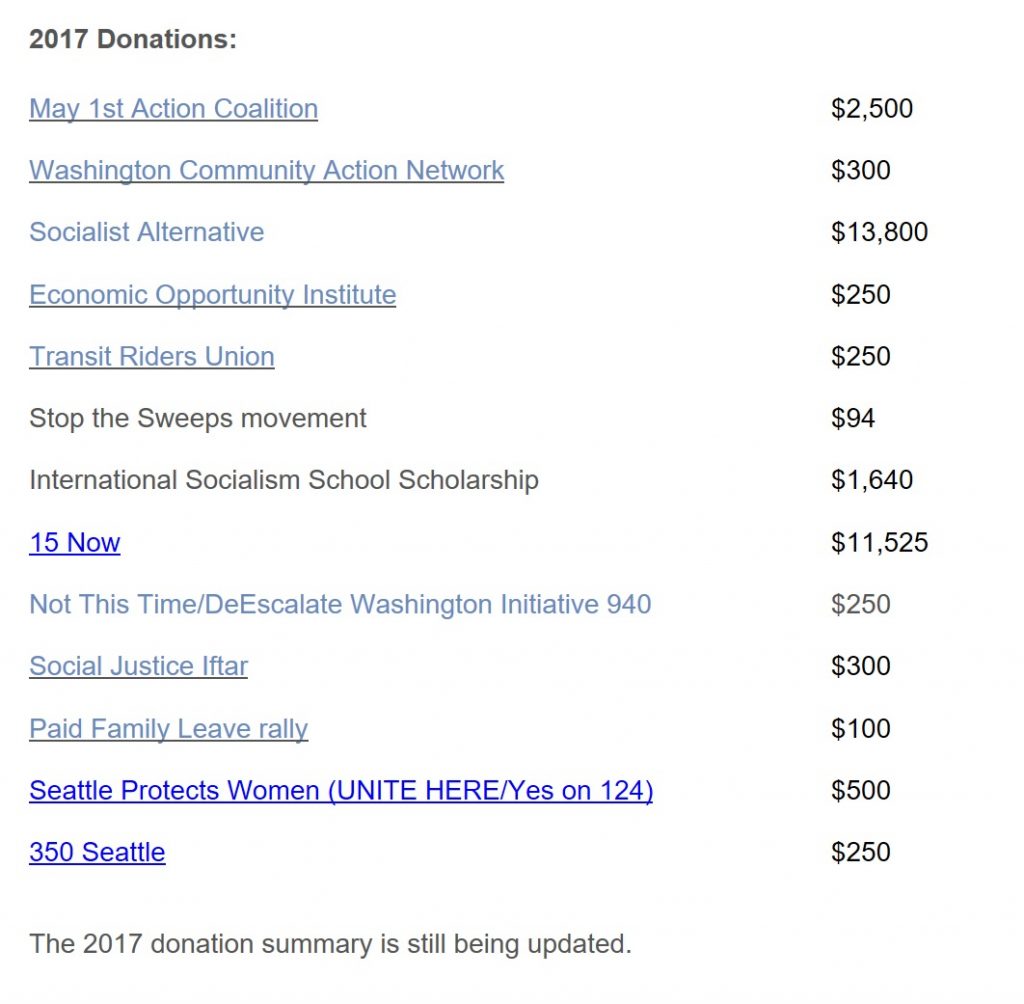 You will notice that the vast majority of the money — over $25,000 —  apparently went to two organizations:  Socialist Alternative and 15 Now.

Putting the pieces together: last year Sawant gave $13,800 to Socialist Alternative, and Socialist Alternative in turn spent over $11,000  flying Sawant and Priest around the world. Is it legal? Sure, and I have no doubt they were legitimate trips — Sawant is no Scott Pruitt. But let’s not kid ourselves: sending Sawant to campaign in Minnesota, to speak at conferences, and to represent Socialist Alternative at national and international committee meetings is as much (if not more) about her building her own brand as it is about advancing the organization’s interests.  If Sawant had simply paid for the travel out of her own pocket, I’d have no problem with any of it. But laundering it through her “solidarity fund” and Socialist Alternative is at the very least disingenuous, and arguably self-dealing.

It’s worth taking a moment to understand what Socialist Alternative is — and is not. It is not a non-profit today, though it used to be; for many years it was registered with the IRS as a 501(c)(4)  “social welfare organization.” But in 2013 it stopped filing the required annual Form 990 financial disclosures (a nonprofit’s equivalent of a tax return), and in 2016 the IRS revoked its 501(c)(4) status. This is most likely because Socialist Alternative decided to become active in political campaigns, which under IRS rules social welfare organizations may not do. However, Socialist Alternative has not registered with the FEC as a political party or committee, nor has it registered as a political committee in Washington State or New York State (where it is headquartered). It also hasn’t re-filed with the IRS as a political organization. It is, for all purposes, a private company whose internal activities and finances have been completely opaque since 2012. There is no transparency or accountability for how it spends any donations it brings in, or for how it makes decisions — like paying for travel for Sawant and Priest. Its web site gives no information about its leadership or finances.  The domain name “socialistalternative.org” is registered to the Seattle office, and the administrative contact is Ted Virdone — a longtime SA member and currently a legislative assistant working for Sawant. Socialist Alternative is a political organization closely tied to Sawant that is flouting the national and state political accountability systems without any transparency or external scrutiny.

15 Now is only slightly better. Officially the parent organization is a PAC registered in Washington State, with local chapters functioning as separate organizations spread around the country. The 15 Now web site says that it was “launched in January of 2014 by Seattle City Council Member, Kshama Sawant and Socialist Alternative to fight for a $15 minimum wage in Seattle.” It was successful in that fight, and lives on as a “continuing political committee” in the state so it can fight for a $15 minimum wage in other local jurisdictions.  In 2014, 15 Now’s campaign disclosures show a $2,500 contribution from Sawant, though Sawant’s “solidarity fund” page claims she gave $15,000 that year).  Since 2015, however, 15 Now has not reported any contributions or expenditures — despite Sawant making large contributions every year, including her $11,525 donation last year.

15 Now is not registered with the FEC nor with the IRS as a political organization, so once again there is no paper trail and no documentation of where the money is going — or the nature of Priest’s relationship with 15 Now, which you’ll recall Sawant listed in her financial disclosure form this week. True to form, the 15 Now web site lists no financial information and little about its leadership, though if you poke around you can discover that the 15 Now treasurer is campaign consultant Jeff Upthegrove and the campaign chair is Jessica Spear, Sawant’s former campaign volunteer coordinator and an unsuccessful candidate for the State House of Representatives. The domain “15now.org” is registered to — surprise! — Calvin Priest.

Let’s not forget that other $1,850 in travel taken by Sawant and Priest, paid for by Movement for the 99%. According to its web site, it is also “launched by socialist City Councilmember Kshama Sawant as a solidarity campaign dedicated to building and supporting movements that fight racism, sexism, environmental destruction, and for workers rights.” Not surprisingly, there is no other leadership or financial information, though it does have a store where you can buy a $20 “Tax the rich!” t-shirt. So we have no idea where the money originally came from, which funded Sawant and Priest to travel to the Women’s March last year.

Given that Sawant purports to lead a movement for ordinary people, the organizations she leads — and that in turn fund her activities — tell ordinary people very little about where their money is coming from, or where it’s being spent.  And she herself claims to be only taking an “ordinary worker’s salary” while funneling tens of thousands of dollars through her “solidarity fund” into opaque organizations with which she has intimate connections and deep financial relationships.

The moral of this story isn’t that Sawant’s underlying causes are bad; indeed, just the opposite. She has a talent for pointing out big problems, and we need to unite to fight against economic injustice and other societal inequities (though there is still room for spirited policy arguments about the best means to address them). The real message is simply this: Sawant claims not to be a career politician, but in reality she is working from the same playbook. Power still corrupts, and none of our elected officials should be blindly trusted. We must demand transparency and hold them to account for their lies, deceptions, and financial shenanigans.