Welcome to “Bizarro World” Seattle. Last night after the May Day march, the antifa “anarchists” were anything but. And today, civic discourse descended into the pit of despair as bluster, posturing, speechifying and flat-out verbal abuse displaced serious policy debate on complex issues.

The first punch was thrown this morning by Amazon. On the heels of yesterday’s budget update presentation that noted the city’s financial dependence on Amazon’s employment figures as well as the construction industry, the retail behemoth let it be known that they were halting planning on their new “Block 18” commercial office tower and considering subleasing their space in the Rainier Square building, pending the Council’s decision on whether to enact a proposed new tax on big businesses that would cost the company $20 million annually — signs that they are rethinking their commitment to growing their employee base in Seattle. This comes on the heels of announcements that they are hiring thousands of people in Vancouver and Boston, and their HQ2 search continues.

That set off a firestorm of responses from politicians. The Seattle Times quotes a spokesperson for Governor Inslee saying that Amazon had raised the topic of the tax with the governor, and that he hopes there is room for compromise. The newspaper also quotes Mayor Durkan, who recently sent a letter to the City Council expressing her concerns with the proposed tax; she expressed concerns about the jobs impact if Amazon follows through, and pledging to work with the Council and business and labor leaders to strike a deal.

Amazon’s news came just before the Council was scheduled to hold a committee hearing to discuss issues and possible amendments related to the tax legislation and the accompanying spending plan. With everyone clearly on edge, that meeting was 90 minutes of pointless arguing, personal attacks, and political posturing. The lowlights included:

After the meeting, Bagshaw told me that she also was concerned about the jobs impact of Amazon’s announcement.  “We need to find out if the jobs are really going to be impacted and I’m interested in the construction group, the building and construction trades have sent us a letter as well, saying this is going to impact some of their jobs, so we need to know about that.”  Bagshaw also admitted that, given today’s lack of progress on discussing issues, she’s not optimistic they will meet their self-imposed deadline of mid-May to vote on final legislation. “We’re going to need more time,” she said. She intends to schedule an additional meeting of her committee in the coming days to try to finish today’s incomplete discussion.

Later in the afternoon, the four Council members sponsoring the tax legislation (Gonzalez, Herbold, Mosqueda and O’Brien)  issued a joint press release in response to Amazon’s news. In it they said:

“This was never a proposal targeting one company, but Amazon made the conversation about them when they expressed their intentions to pause construction on their new office tower pending a vote on our Progressive Tax on Business.”

And yet, in the same press release they quote Amazon’s recent earnings reports, and note that “Seattle has become the nation’s biggest company town.” Also, let’s not forget that Amazon alone will pay about 26% of the total revenues raised by the new tax. Or that Sawant has spearheaded an organized “Tax Amazon!” movement, including a protest outside Amazon’s headquarters with activists literally waving “Tax Amazon” signs. Explain to me again how this was never a proposal targeting one company…

Yes, Amazon’s move to halt construction on their office tower was absolutely a political act aimed at derailing the new tax. But to say that the conversation wasn’t about them until this morning is utterly disingenuous.

The meeting that followed the head tax discussion went even worse. That meeting was of Juarez’s Civic Development, Public Assets and Native Communities Committee, and featured the first discussion of the proposed Waterfront Local Improvement District (LID). As the contingent of Sawant-led activists filed out of Council Chambers from the previous meeting, a much larger group of angry downtown and Belltown residents filed in and packed the room for the LID discussion. Only two Council members stayed for the discussion: Juarez and Bagshaw; but Bagshaw announced that she was still required to recuse herself until the city’s ethics ordinance is modified, and promptly left the room. That left Juarez alone to deal with the angry audience, who shouted, booed, jeered, and otherwise made their displeasure known with the proposed LID assessment.  They were also very unhappy that the other seven Council members were not present, despite Juarez’s patient explanation that this was a committee meeting, not a full Council meeting. Bagshaw is the committee’s vice chair; Gonzalez is the third member, and Sawant is the alternate member. Gonzalez had no excuse for not attending, given she had sat through the prior meeting and had just left the room.

The commenters argued that the LID is an unfair tax that puts too much burden on local residents for public assets that will benefit the entire city and region, not to mention out-of-town visitors and cruise ship passengers. However, in the presentation that followed, it was pointed out that of the $688 million for the project, only $200 million is coming from the LID; $100 million is coming from philanthropy, and $388 million is coming from state and city coffers. City staff also noted that other investments in the waterfront go far beyond this specific project, and include the $3.2 billion being spent to replace the Alaskan Way Viaduct with a tunnel; the seawall reconstruction; WSDOT’s work on Colman Dock, and additional utility upgrades along the waterfront. 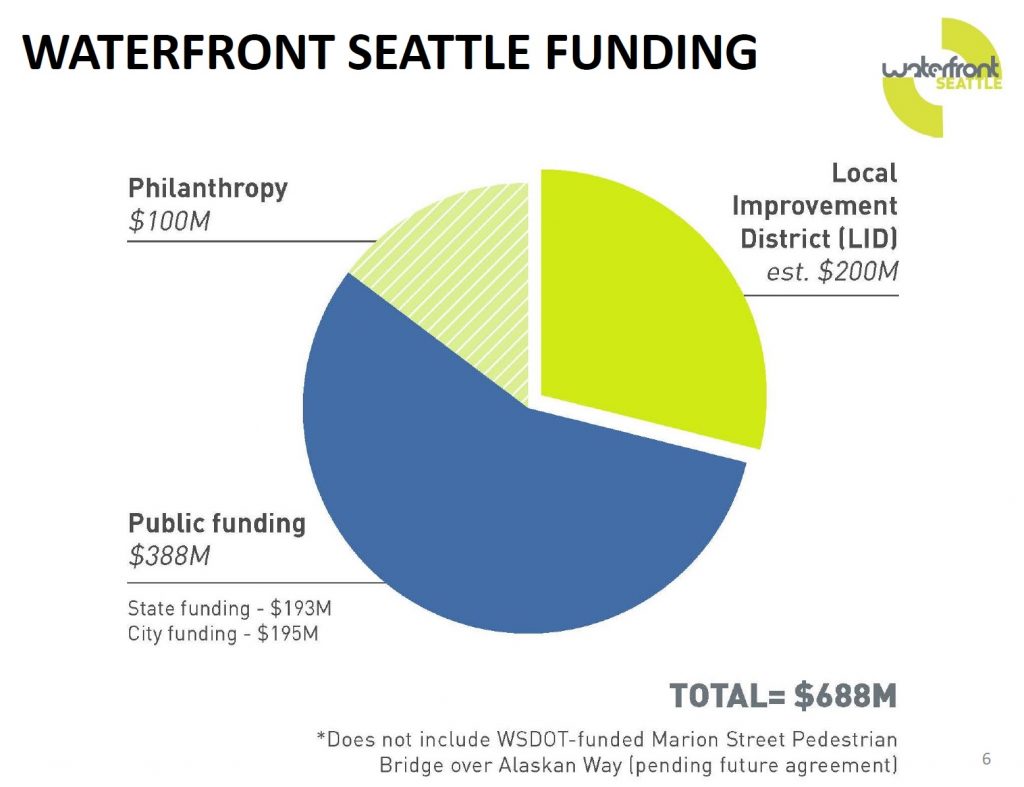 They also explained that “special benefit district” assessments are well-established in real estate, based on the principle that public improvements increase value to private property. LIDs, and the detailed process of creating one, are governed by state law.

Unfortunately, most of the people who showed up to protest the LID didn’t hear that presentation; they left as soon as the public comment session finished.

But wait, there’s more ugliness to report, as there was a “town hall” held in Ballard tonight to solicit community feedback on the proposed new tax on large businesses. The session was hosted by Council member O’Brien, whose district includes Ballard. O’Brien’s office sent out invitations in advance,  noting that other City Council members and members of the Progressive Revenue Task Force would be present.  But the event announcement also said that it would be a moderated session, where questions would need to be submitted for selection by the moderator, rather than one where people could ask their own questions.

That did not sit well with the community. The Ballard District Council encouraged people to “Show up anyway. Write to Councilmember O’Brien and let him know what you think about a Town Hall where the citizens remain silent and everyone else speaks.” KIRO Radio fanned the flames.  According to reporters David Kroman and Erica Barnett, the audience was hostile from the outset and remained angry and verbally abusive throughout the meeting, complaining not only about the lack of an “open mic” format (the moderator Kirsten Harris-Talley and Council member O’Brien eventually relented on that issue), but also about the Council members, the Task Force members, the moderator (who showed remarkable restraint), homeless people, crime and safety, bike-share, and other issues. Barnett posted an audio clip of part of the event, and here’s her full report. Of note: the event was held in the Trinity United Methodist Church.

Today was not a proud moment for Seattle. There were no winners in the skirmishes, but there were plenty of losers, including Amazon, the City Council, homeless people, and Seattle’s reputation for thoughtful policy-making. The city’s elected officials, including Mayor Durkan, look ineffective for losing control of the political process on important and urgent topics. The debate over the proposed new tax on big businesses was certainly divisive before today, but it has now lost all coherence and has devolved into a shouting match. While Amazon threw gasoline on that fire today, it speaks to elected officials’ inability to build a broad base of support for the policy that the company could derail it so easily.

For all our talk of being a progressive policy oasis, Seattle’s political landscape today was just as angry, tribal and hopelessly deadlocked as Trump’s America — but for some different reasons (and some of the same reasons). Attempting to set policy by shouting at each other is not a good look for us, and it solves nothing. We have some critical, complex issues to wrestle with, but we are also blessed with a strong, diverse local economy, a well-educated population, a commitment to philanthropy, and a beautiful place to live and work. Those things unite us and empower us to find solutions to our problems. We are capable of so much better than this infighting, but it will take real political leadership to unite us — leadership that was visibly absent today.