Seattle’s waterfront is undergoing a massive $4.7 billion renovation, including rebuilding the seawall, tearing down the Alaskan Way Viaduct and replacing it with a deep-bore tunnel, rebuilding Colman Dock and the ferry terminal, remaking the Alaskan Way surface street, and improving park and streetscape elements as part of the city’s $688 million Waterfront Seattle initiative. $200 million of the funds to pay for Waterfront Seattle are proposed to come from a new Local Improvement District: a special assessment on downtown properties that are expected to increase in value because of the project. But some residents who will be subject to the assessment are unhappy that they are being asked to foot part of the bill for a project they say will benefit the entire region. 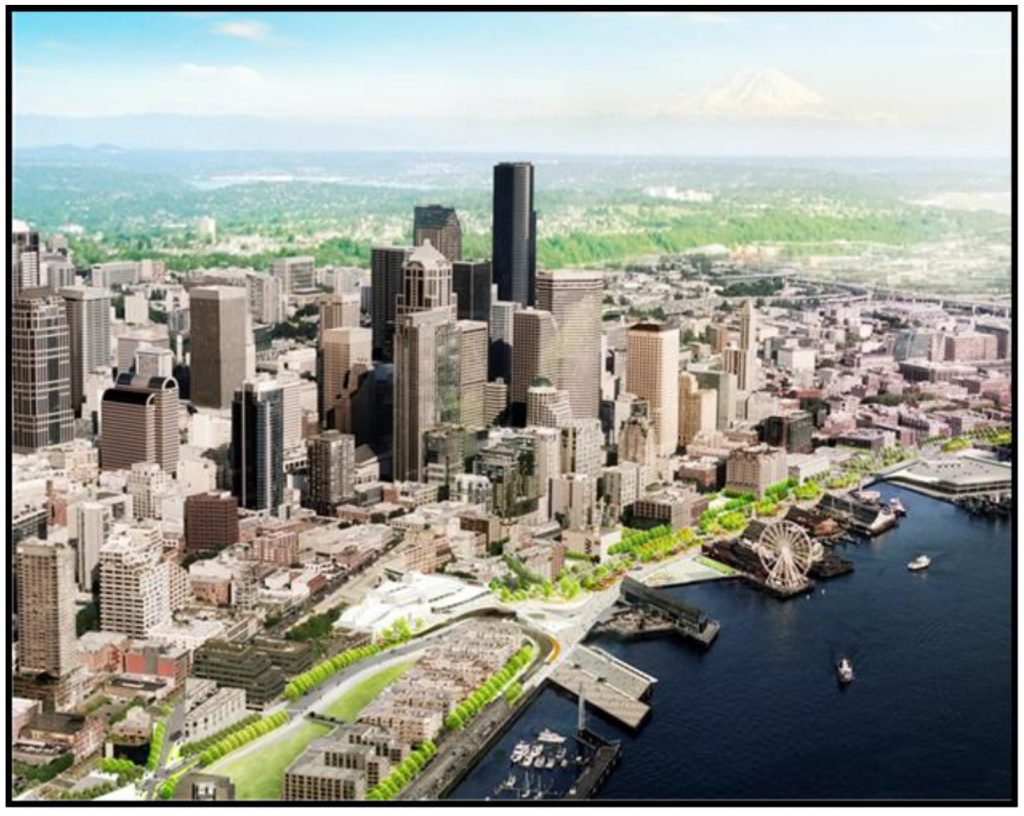 Let’s look at how LIDs work, and how this one in particular is structured.

Local Improvement Districts are nothing new; they have been used extensively across the state to fund infrastructure and public works projects. A chapter of Washington State law described in detail the authority that local governments have to create LIDs:

“Whenever the public interest or convenience may require, the legislative authority of any city or town may order the whole or any part of any local improvement… to be constructed, reconstructed, repaired, or renewed and landscaping including but not restricted to the planting, setting out, cultivating, maintaining, and renewing of shade or ornamental trees and shrubbery thereon; may order any and all work to be done necessary for completion thereof; and may levy and collect special assessments on property specially benefited thereby to pay the whole or any part of the expense thereof…”

It also spells out the precise process that local jurisdictions must follow in order to create a LID. We’ll come back to that shortly, but first a quick history lesson on the Waterfront LID.

The waterfront renewal project officially goes back to 2009, when the City Council passed an ordinance establishing the Central Waterfront Partnerships Committee to advise the city on how to move forward. It followed that up in 2011 with a resolution creating a new committee and identifying public and private sources of funding. Out of that effort came the Waterfront Program Strategic Plan in 2012, which the Council adopted; it included a funding plan that specifically  endorsed the creation of a Local Improvement District to provide part of the funding.

The first step in creating a LID is to assess property values, both with and without the project, to calculate the size of the special benefit it creates. The city began that process in 2013, but put it on hold when Bertha broke down partway through digging the SR99 tunnel. In 2016 it restarted the effort by hiring Valbridge Property Advisors, a large, national assessor with experience doing assessments for LIDs. Valbridge completed the first stage of the assessment, a “feasibility study,” in 2017, estimating between $300 and $420 million of total special benefit at the time. It’s a feasibility study because the city can only assess up to the total size of the special benefit; the study provides important information for the city in budgeting the project. 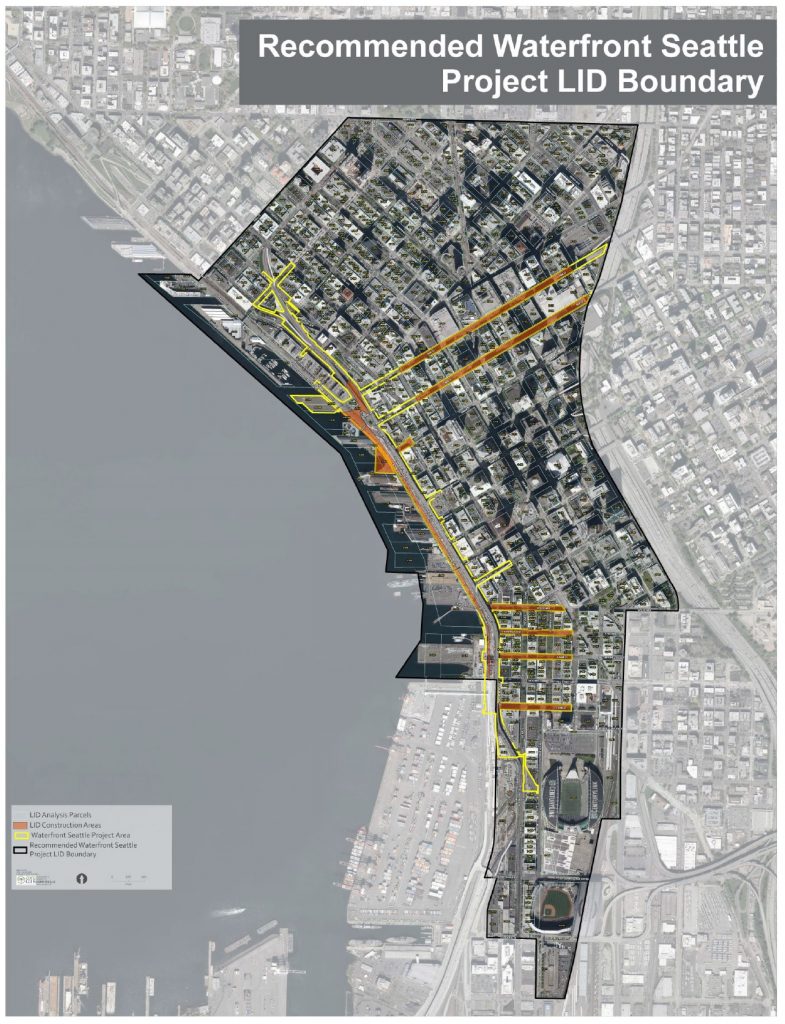 Based on the feasibility study, last year the City Council passed a resolution reaffirming its commitment to consider a LID, along with recognizing the Friends of the Seattle Waterfront as a key partner in the project; the Friends committed to operations and maintenance, and to raising $25 million in philanthropic donations to the project.

Earlier this year, Valbridge completed its Special Benefit Study. It concluded that the total property value in the proposed LID area (without the project improvements) would be $49 billion, and the total special benefit would be $415 million. Based on that, the city targeted the LID to raise $200 million — just under half of the special benefit created by the project. The remainder of the $688 million for the project comes from a combination of state funding, city funding, and philanthropy. The city funding is raised through commercial parking taxes and real estate excise taxes (REET). 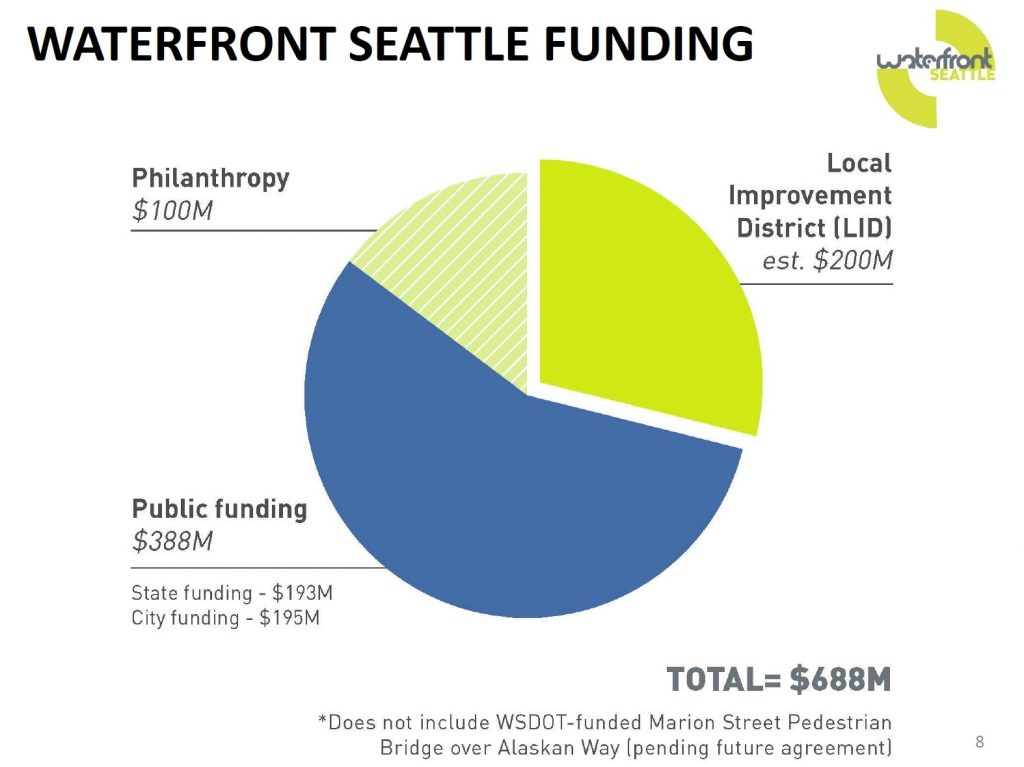 To put this into perspective: the LID is intended to provide 29% of the total funding for the Waterfront Seattle project, and just over 4% of the entire $4.7 billion that is being invested in the waterfront.

The Special Benefit Study identifies 6,130 individual tax parcels in the proposed LID area. About 4,960 of those are residential condominiums spread across 54 projects and collectively worth about $4 billion. The remaining 1,170 are commercial properties, including apartment complexes, worth $45 billion. Accordingly, 87.5% of the total assessment is applied to the commercial properties ($175 million), and 12.5% to the condos ($25 million). That gets further divided among the individual properties based upon their share of the special benefit (i.e. how much their property value goes up). 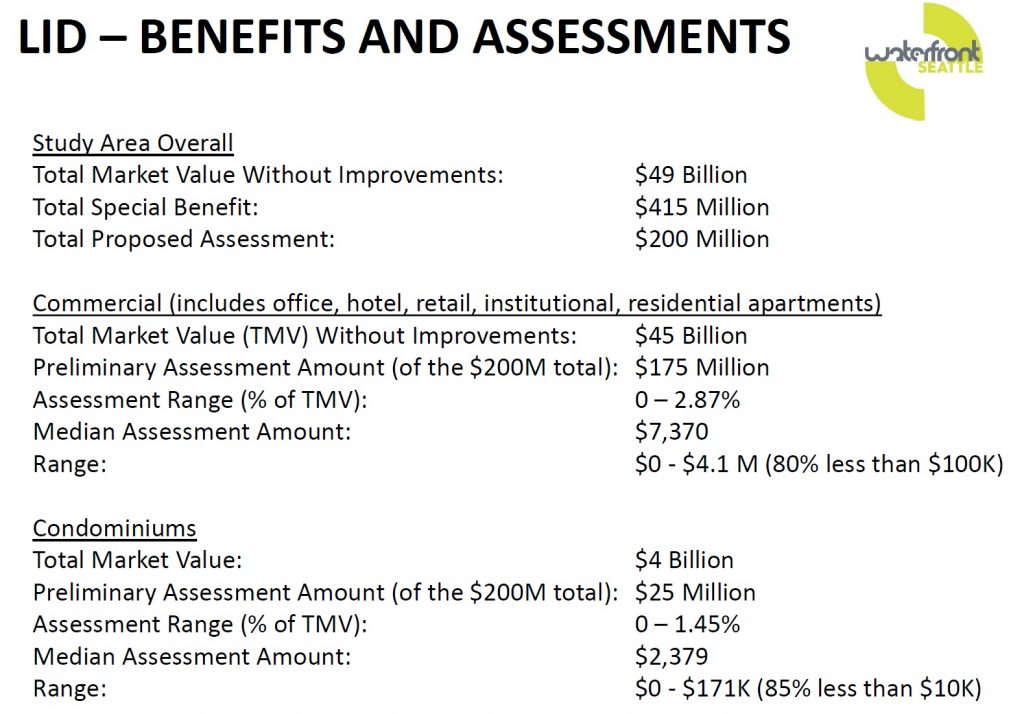 Within the commercial properties there are 15,000 individual apartments. About 3,500 of those are subsidized, under contractual agreements with the Office of Housing that prohibit redeveloping the property or raising rent. Accordingly, they are not expected to receive any special benefit and are not assessed. For the remaining 11,500, the median assessment per unit is about $1300.

The assessment is a one-time charge; however, property owners can choose instead to pay it over 20 years instead of up-front, with an interest rate based on the interest rate on the LID bonds issued by the city (which fluctuates, but is very low given the city’s excellent credit rating). The city calculates that if the LID assessment on apartments is passed through to tenants, it would lead to an increase in rent of $5-6 per month.

Since the State Constitution requires all property to be assessed uniformly, the city may not exempt certain properties from the assessment. They may, however, take advantage of state-authorized deferral programs that allow senior, disabled, and economically-challenged property owners to defer payment of some or all of the assessment up to 20 years or until the property changes ownership. 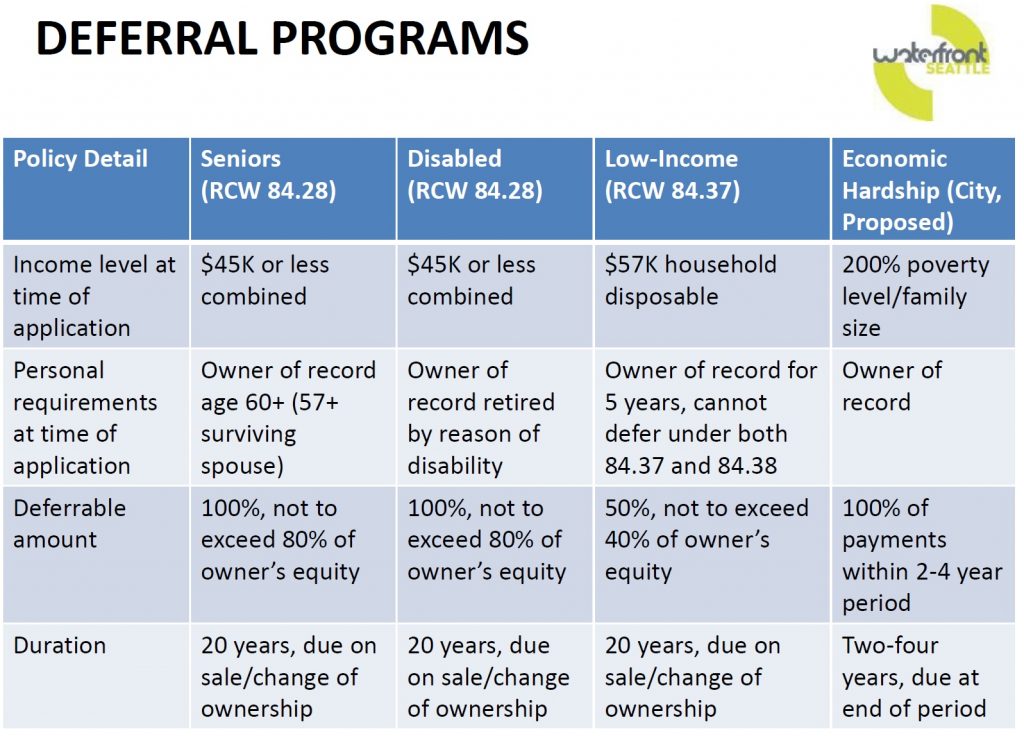 The city has taken all the individual assessment information and loaded it into a web site so that property owners can see what their special benefit and proposed assessment would be if the LID is created.

What the City Council is currently deliberating is a resolution that would officially declare the city’s intention to create a LID. If passed, there are several state-mandated steps that must be followed before the LID is officially created. The first is that those property owners subject to the LID assessment must be officially notified, followed by a series of public hearings and an opportunity for people to submit written comments. All of the feedback will then be collected and distributed to  the City Council members. Once that is done, the Council can then take up an ordinance officially creating the LID.

The Council’s resolution tasks the Hearing Examiner with managing the public hearings and delivering the public comments back to the Council. That is considered a “quasi-judicial” process, which means that from the time that the process begins (at the first public hearing on July 13) to the conclusion of the public comment period, the Council members may not discuss the LID with outside parties; all comments and feedback must go through the Hearing Examiner’s office.

If the Council does pass an ordinance creating the Waterfront LID, the process is still not over. Property owners will then have 30 days to officially protest the LID. If property owners collectively representing at least 60% of the total assessment ($120 million) protest, then the Council may not move forward with creating the LID.

At the end of the 30 day protest period, there is another 30 day period in which legal challenges may be filed in court against the LID. If no legal challenges are filed in that time, then the lid becomes official — and state law is very clear that it may not be challenged after that point.

Here’s the projected timeline for the LID formation process: 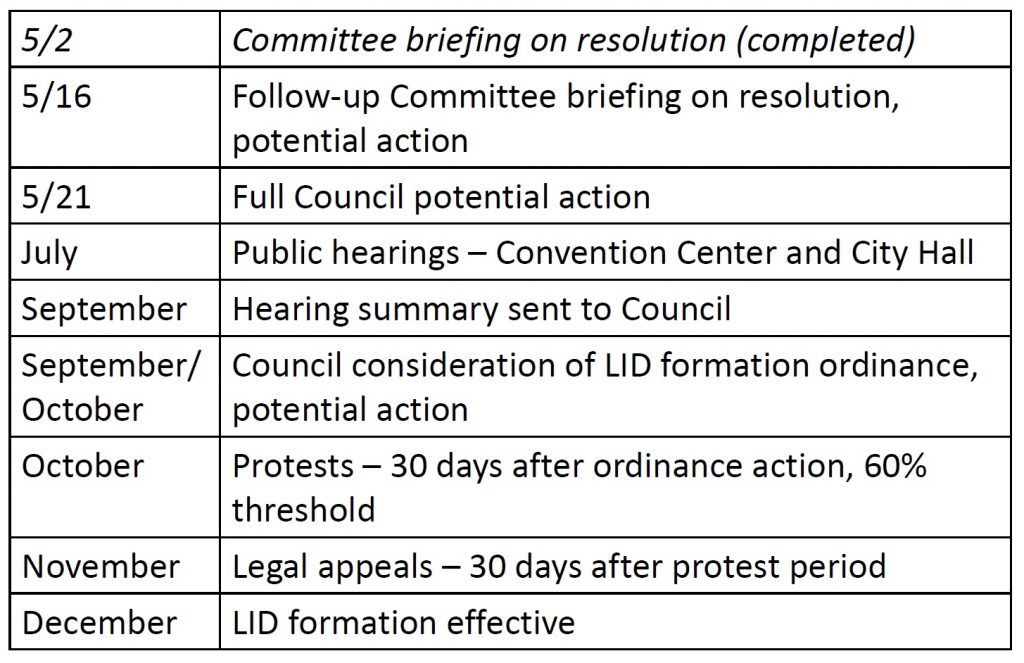 The Council voted the resolution out of committee this afternoon, so it will come up for approval with the full Council next Monday afternoon. Assuming it passes, the public hearings will be held on July 13, 17, 18, and 28. 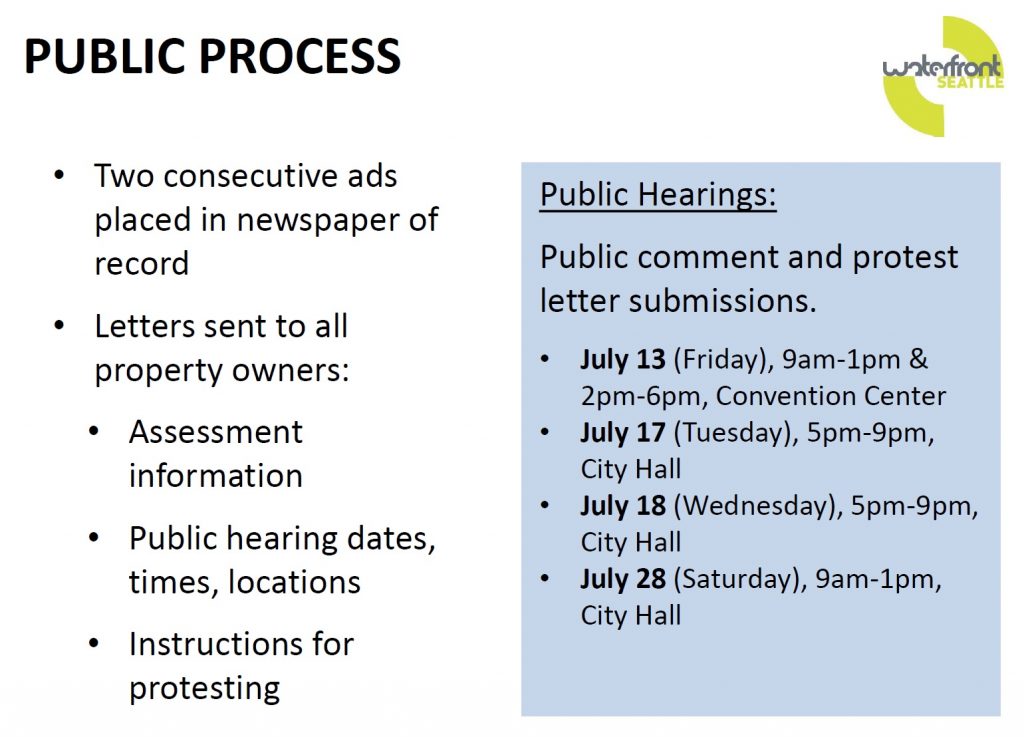 As with the first committee discussion on the LID two weeks ago, today’s meeting attracted dozens of property owners from the proposed LID area to register their opposition. Some were clearly misinformed about the size of the assessment that they would have to pay, whether the resolution currently under consideration would actually create the LID (it doesn’t), and/or the constitutionality of a Council-enacted LID. State law is clear that city councils have the power to create LIDs, and there is plenty of precedent for that in Seattle alone, including the South Lake Union Streetcar in 2008 and Portage Bay Place in 1998. They grumbled about “taxation without representation” (clearly forgetting that they were speaking to their elected representatives), and argued that because the waterfront is a city-wide and regional resource they should not be subject to a LID (ignoring that nearly $200 million is being paid for by the city, and another almost $200 million by the state).

Public commenters did raise two other concerns that are more valid:

Despite the vocal opposition from a group of property owners (Council member Gonzalez said today that she has received hundreds of messages about the LID), the Council will likely vote to pass the resolution on Monday and start the ball rolling. As always with Seattle politics, the outcome of the protracted “Seattle process” is unclear, but at the moment the smart Vegas money is betting that they’ll go ahead with the LID this fall.

A side note: Council member Bagshaw, who represents the vast majority of the proposed LID area and owns a condo there, has been required to recuse herself from the deliberations on the waterfront LID so far. But a separate bill also up for final approval on Monday afternoon would modify the city’s ethics law to exempt Council members from recusing themselves for legislative matters related to taxes and assessments when their personal assessment is undifferentiated from others’. Various forms of this change have been proposed and rejected over the past several months, but it appears that this one will get the nod and then Bagshaw will be able to fully participate in crafting the LID legislation.

UPDATE 5-21-18: Council member Juarez distributed a packet of memos this morning to respond to several concerns raised by constituents about the proposed LID.