Yesterday, King County released a report with statistics from its annual “Point in Time” count of homeless people living in the county. The 140-page report is an ocean of data and charts. But if you look closely, you can see the story of what’s happening to the homeless population — as well as the city and county’s response.

Let’s start with a quick refresher on what the Point in Time count is, and isn’t. The annual count of homeless people (also known as “Count Us In”) is a requirement, attached to federal funding to address homelessness. It was conducted county-wide on January 26, between the hours of 2am and 6am, by 609 volunteers as well as 206 paid “guides” with past lived experience of homelessness to help ensure that the volunteers don’t overlook homeless people who aren’t in obvious places. They also counted homeless youth and young adults in a separate process during the day on January 25.  It’s not a perfect exercise in that it doesn’t find and count 100% of the homeless, but it’s generally well-executed and it gets better every year.

After the one-night count, a team then follows up to conduct a more in-depth survey with a subset of the homeless population; this year they collected 1,056 survey responses.

There are three notable limitations to the study that are worth keeping in mind:

OK, let’s dive into an overview of the results. The team counted 12,112 homeless individuals, an increase of 469 people or 4% over 2017. Just over half of them were unsheltered, an increase of 5%. 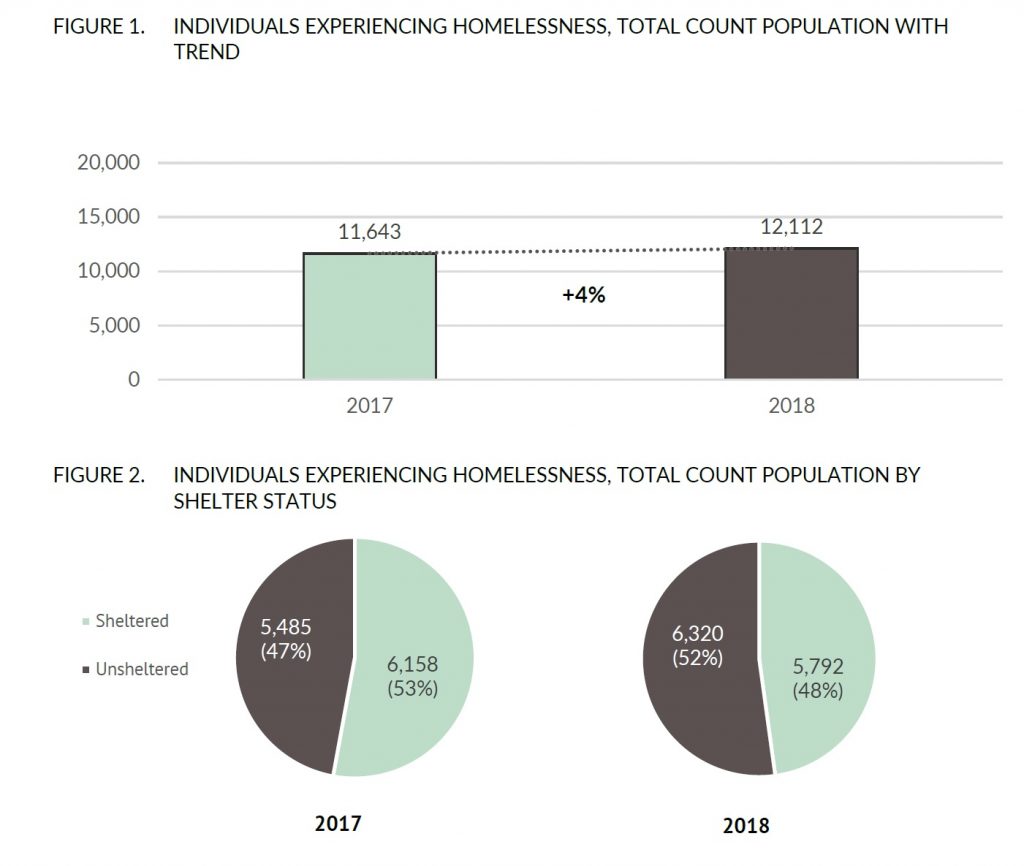 In most parts of the King County the homeless population increased, but in the southwest part it dropped significantly. 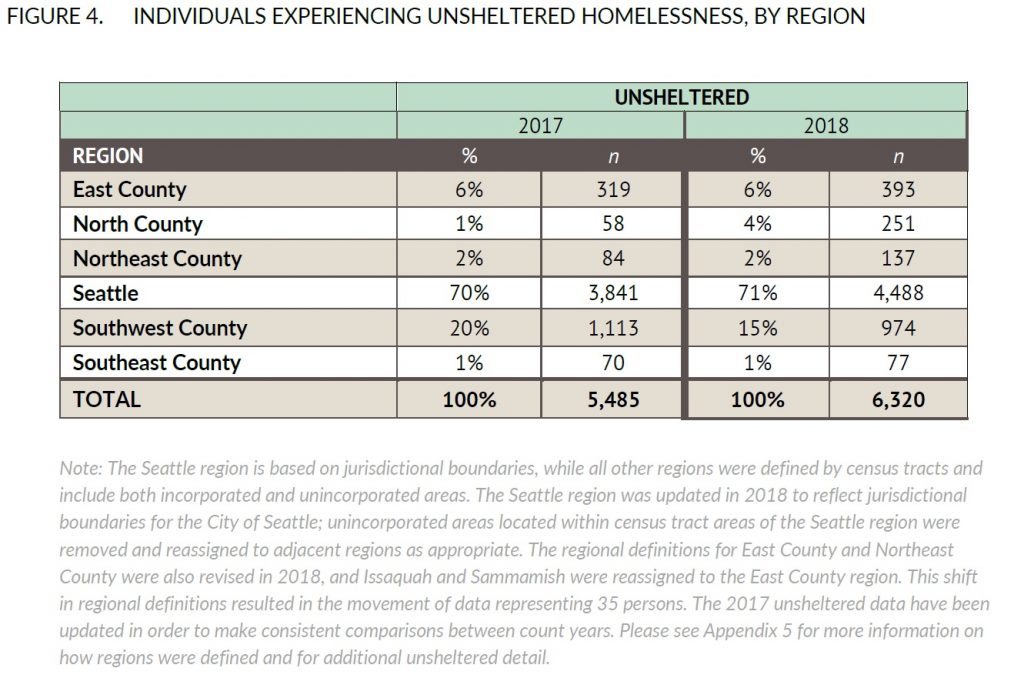 There was a noticeable increase in homeless people aged 25-40, and an equally significant drop in those 41-60.

For the most part, the race and ethnicity of the homeless population didn’t change much year to year; however, the numbers for Native Americans dropped from 6% to 3%, and it has raised concerns with the methodology that might have under-counted Native Americans. Black and African- American people are still significantly over-represented in the homeless community versus the general population, as are Hispanic/LatinX people and those of multiple races, while whites and Asians are under-represented (though still the largest sub-population).

A third were experiencing homelessness for the first time, a number largely unchanged from last year. However, an increasing number have been homeless for more than a year. 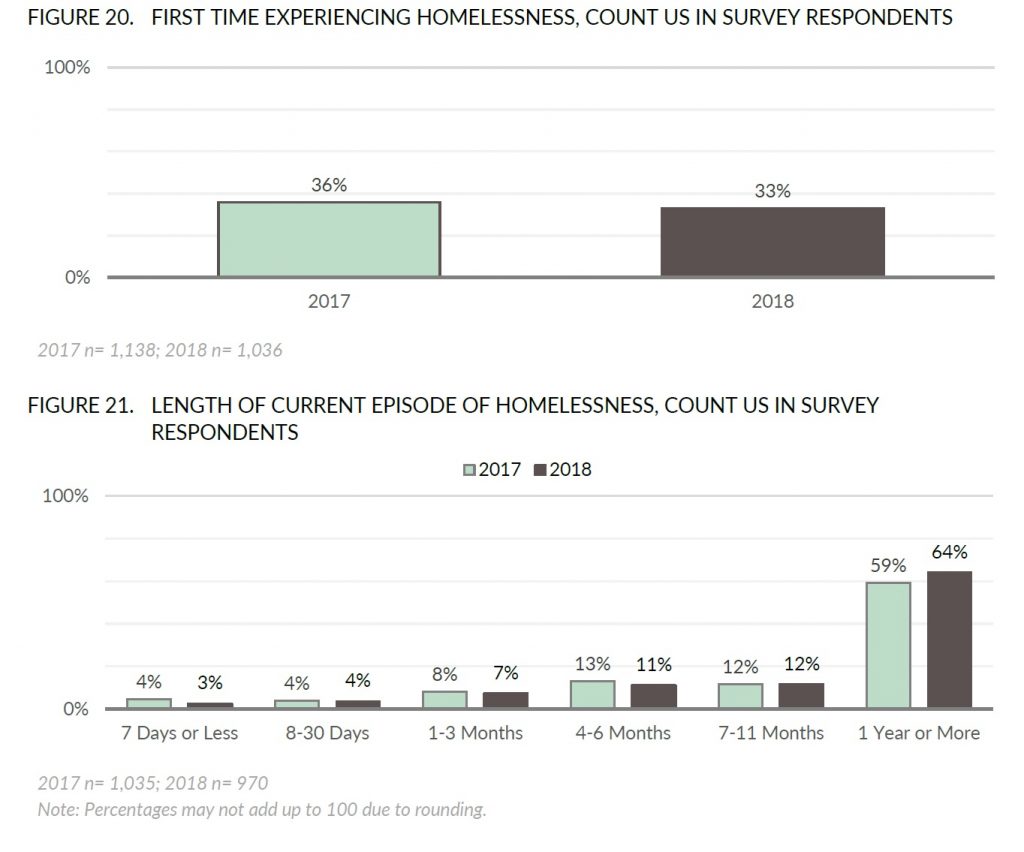 Just over half have previously been in the criminal justice system, though the vast majority were not on parole or probation at the time of the count. 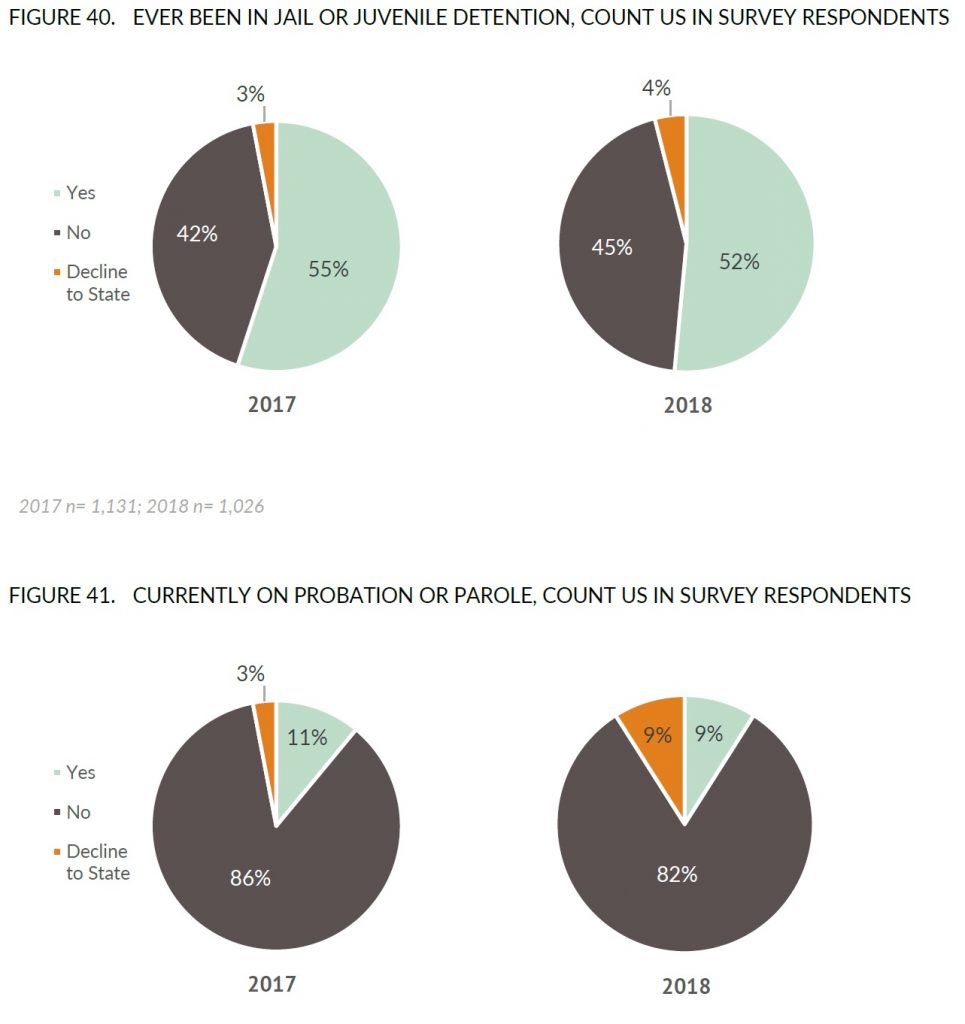 The data continues to debunk the myth that homeless people are moving here from other locations. In fact, the year-over-year trend is just the opposite: this year, an even larger fraction of the total homeless population reported that they became homeless here in King County, and a smaller portion came from out of state.

A much larger fraction said that they had grown up here, and a much smaller fraction had just recently moved here. 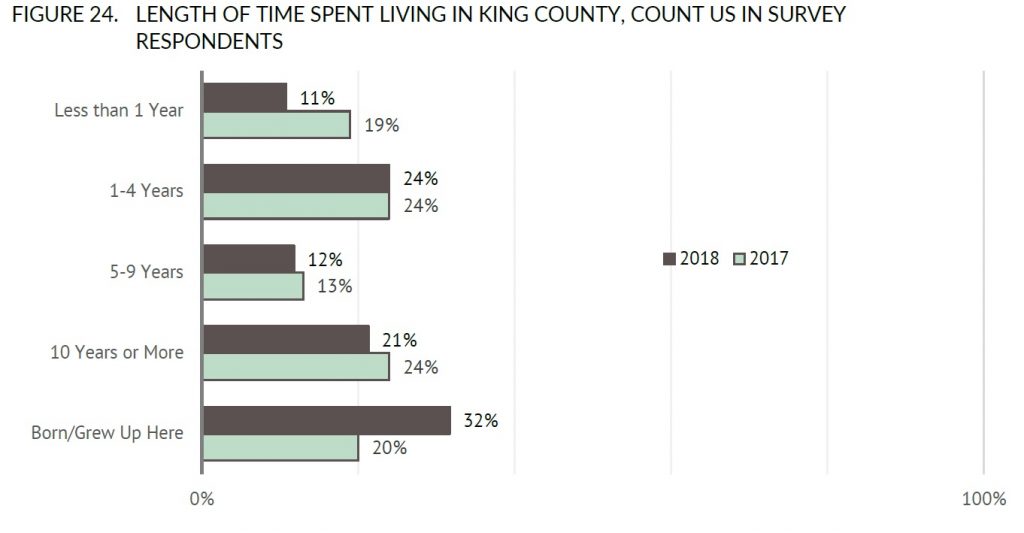 In aggregate, where people were living prior to becoming homeless and the causes of their homelessness didn’t change much from year to year. 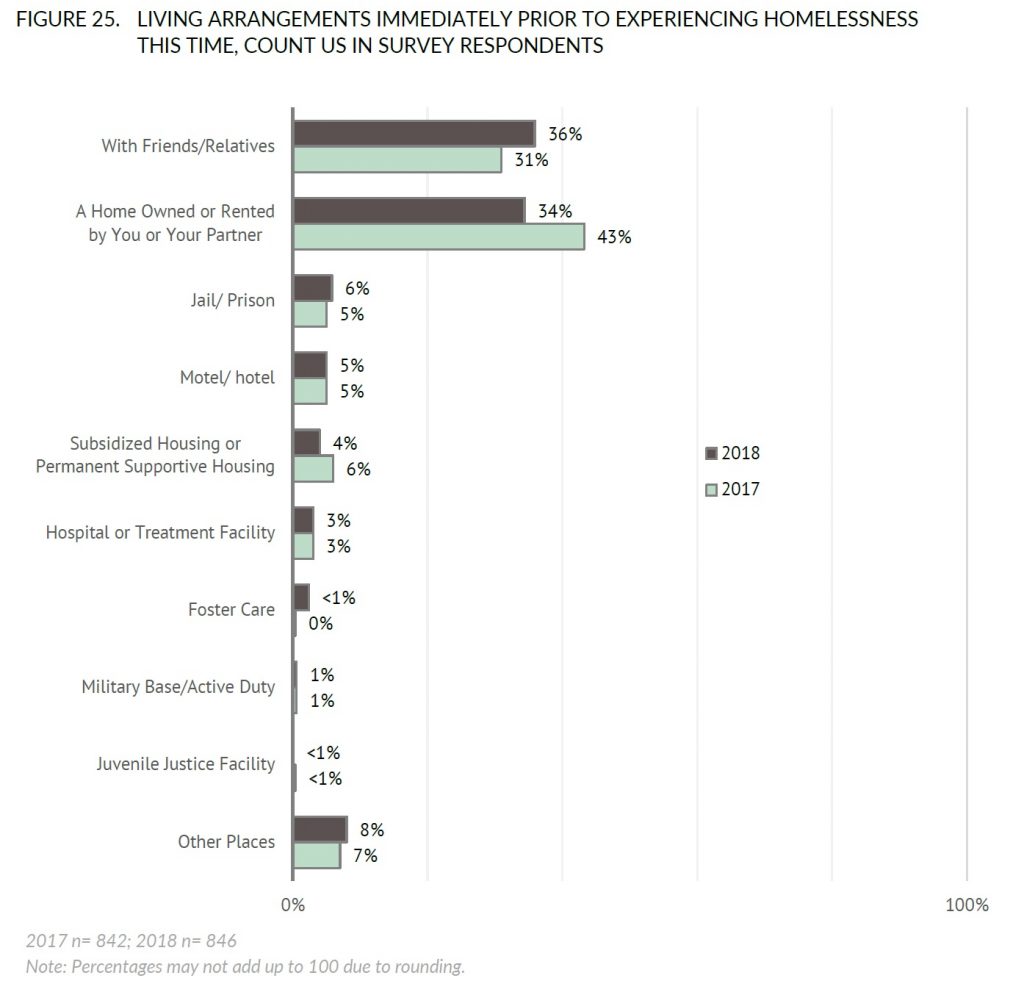 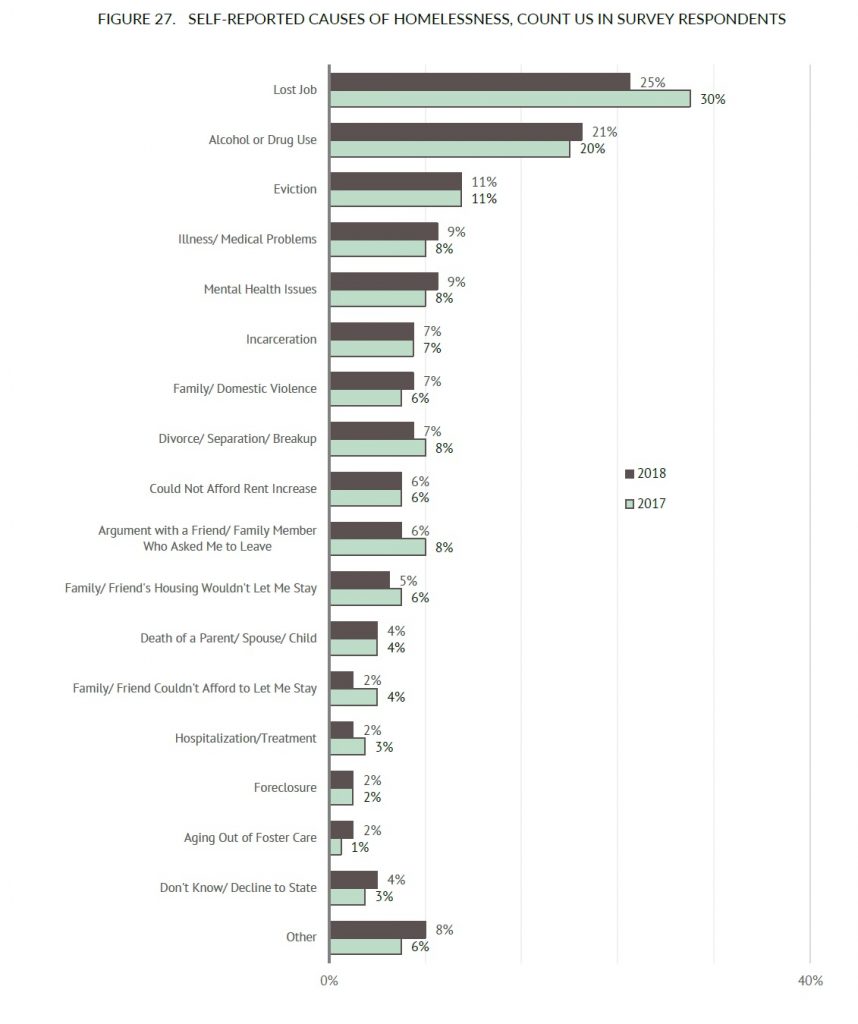 That’s the big picture. But there are equally interesting stories for specific demographics within King County’s homeless community.

Black and African-American people. You probably saw that while still over-represented, the percentage of the homeless population that is black or African -American ticked down a couple of percentage points this year. Here’s another interesting data point: a higher percentage of that subgroup (roughly two thirds) is sheltered than any other race or ethnicity; the numbers are close for native Hawaiians and Pacific Islanders, but no other group is even close. 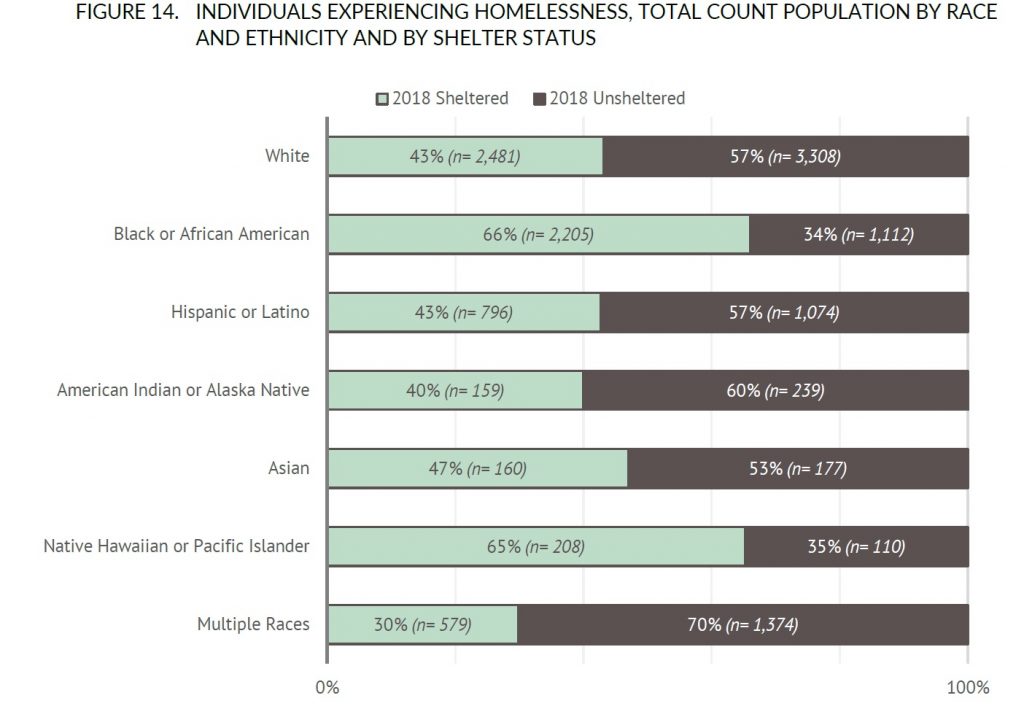 Those two facts are related: those who get sheltered have the highest success in exiting from homelessness, because it stabilizes them enough to allow them to focus on dealing with all the other issues that homelessness brings on, on getting and staying employed, and on finding permanent housing.

The vast majority of the decrease is  due to getting younger parents — under age 25 — off the street. 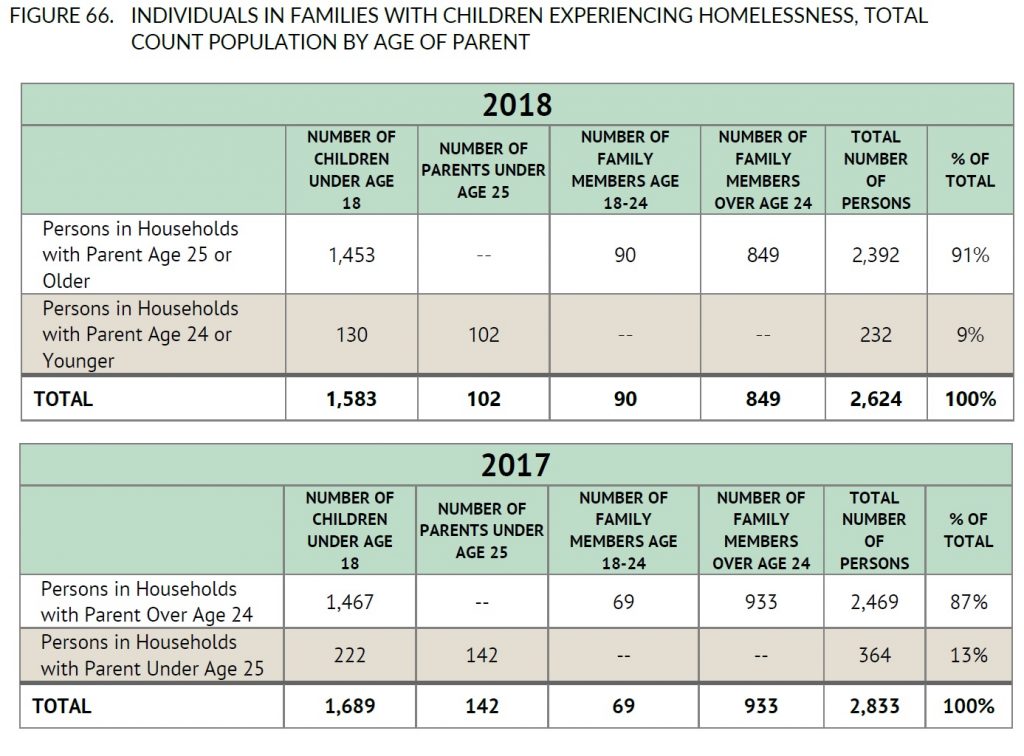 But there are still 1450 children under the age of 18 who are homeless in King County. Nearly all of them (and their parents), however, are sheltered — a minor victory that we can celebrate, even if there is still a long way to go in getting them all into permanent housing.

Another worrying trend: an increase in domestic violence experienced by homeless families.

Not surprisingly, the survey also shows a big spike in domestic violence as the cause of families becoming homeless.

Homeless families use a wide variety of services, but transitional housing is a big one. Clearly this is not accidental: this is a programmatic approach to addressing homeless families led by organizations such as Mary’s Place.

More good news: homeless families are having an easier time accessing services — though language barriers are an increasing issue. 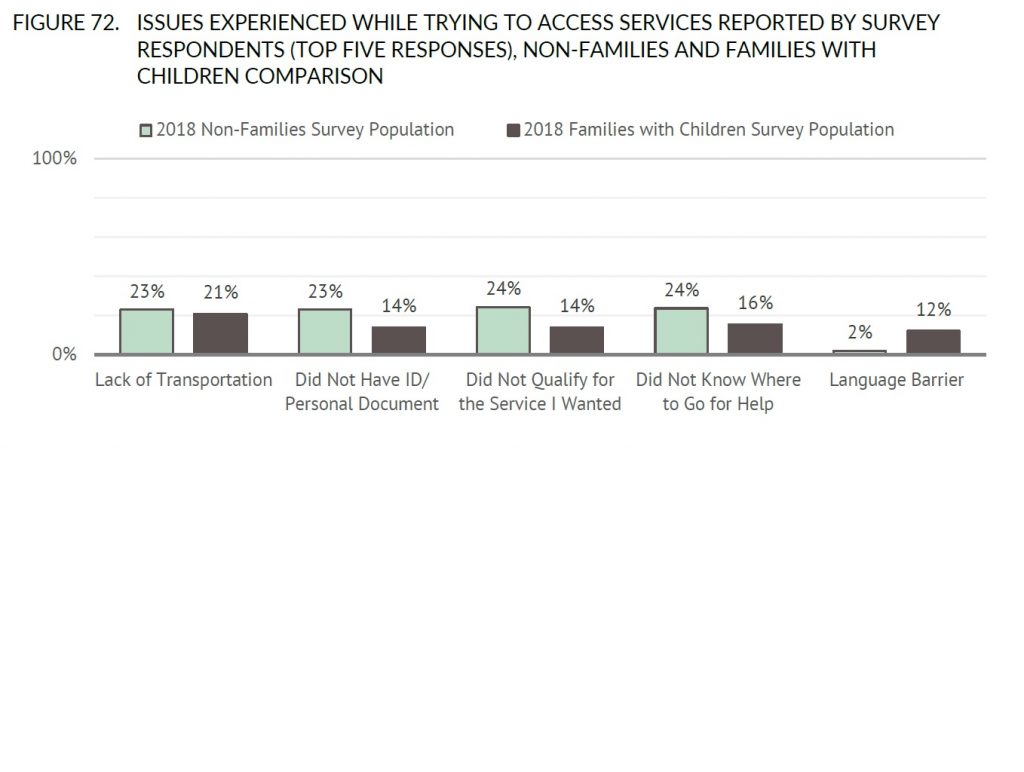 This is what a focused response that works looks like: people are off the streets, they are sheltered, they get into a transitional housing program, and they exit the homeless system.

A larger share of this group identified as LGBTQ+ this year.

Across the board, unaccompanied youth and young adults saw greater access to services, and in particular transitional housing. That should lead to greater exits from housing; unfortunately, a “point in time” survey can’t tell us what the exit rate is, or how much of it is offset by an increase in people becoming homeless. In all, the system for youth and young adults is still not yielding big successes.

Veterans.  This is a high note in the survey results: the number of homeless veterans decreased dramatically.

It’s actually more reinforcement for the “housing first” principle: while both the sheltered and unsheltered veteran populations decreased, the sheltered population decrease much more.

Not surprisingly, the age of the homeless veteran population roughly matches up with the eras when large numbers of young people went off to war.

More surprisingly, there are more female homeless veterans here than there were last year: 53 last year, 92 this year. 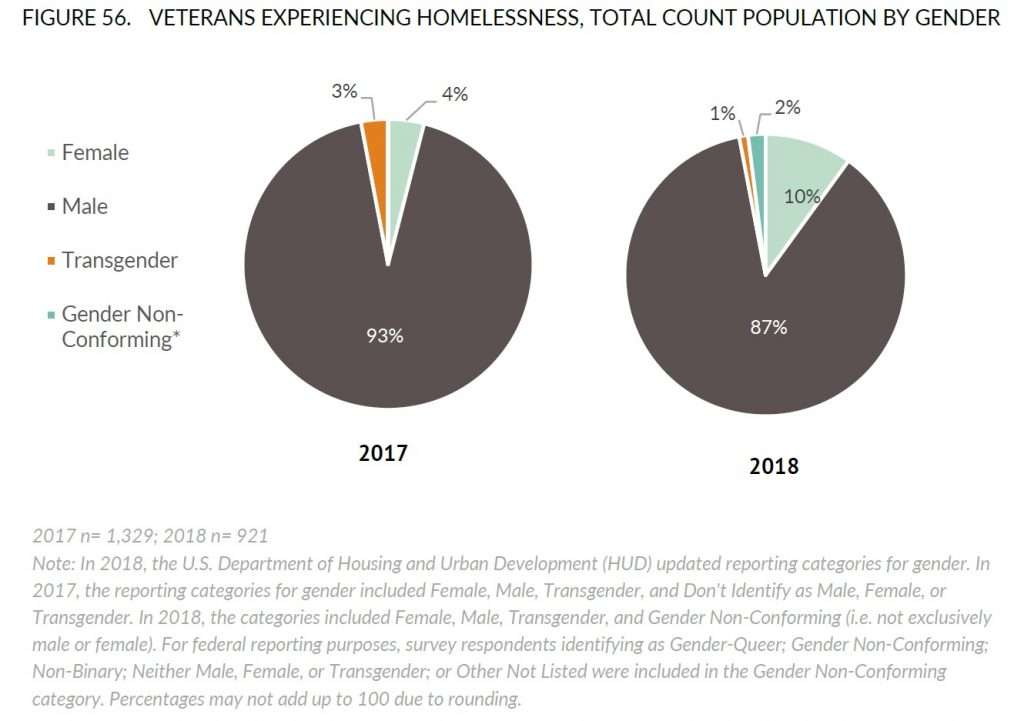 There is a lot of shift in the causes of homelessness for veterans this year. 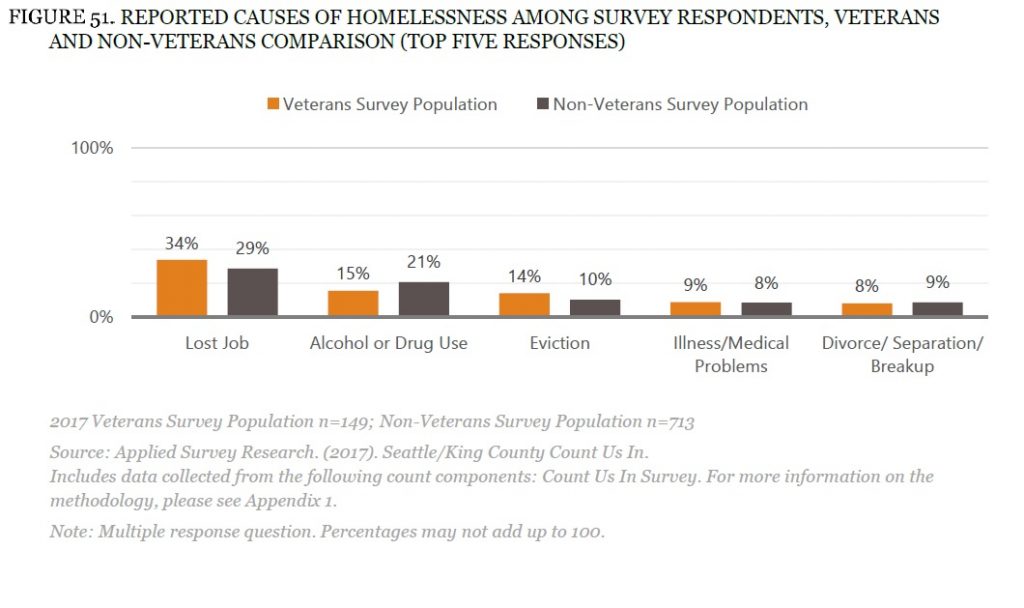 And equally a fair amount of shift in the health issues they are grappling with.

That suggests that as a focused effort to help veterans is spinning up, it may be leaving some people behind — potentially the ones with the more serious health issues, and the women. But there isn’t enough data here to reach that conclusion; more study needs to be done here. The good news is that veterans are reporting more access to services, so hopefully the decrease in homeless veterans will continue.

The chronic homeless. This, unfortunately, is not a good story. The population of chronically homeless went up 28%.

They have had more involvement with the criminal justice system, and more frequently they report drug use as a cause of their homelessness.

They use more services, but they also have more issues accessing those services. and the services they are accessing mostly aren’t the ones that will help them to exit from homelessness.

This is a big failure of the system: a group of people with unique demographics who have been in the system a long time and aren’t getting what they need to get out.

The “vehicle resident” population is predominantly white and middle-aged. The big jump in vehicle residents aged 25-40 aligns with the overall trend we saw earlier of more homeless people in that age range.

Their health conditions look generally the same as the homeless population as a whole, though with fewer chronic health problems.

For more of them, homelessness was a result of economic issues.

Other than use of safe parking sites (which only 20% report using), they access the same services as everyone else, and have fewer issues accessing them.

By its own admission, the city and county have largely punted on trying to address the vehicle-resident community. As with the chronically homeless, none of the services they are accessing are the ones that will help them exit from homelessness.  There is much that could be done here. This is one area where I wish the report went into more detail: what part of the city they are residing in, how long they have been homeless for, what their employment status is. Those are all key questions that would help our local government figure out how to help these folks.

A few other topics pop out of the report that are worth mentioning:

Access to services. The state and federal government have not stepped up their help — at least in terms of direct assistance to homeless people. 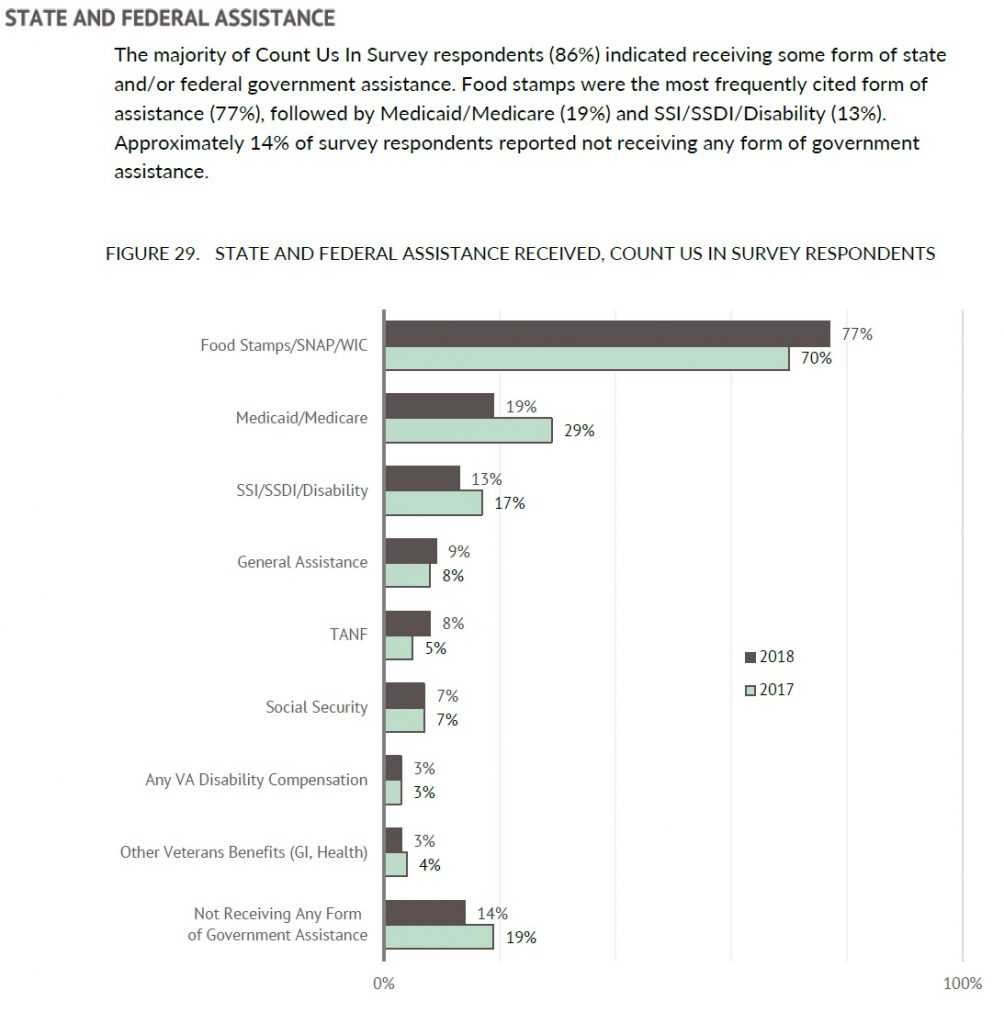 Despite an increase in the number of people completing a Coordinated Entry assessment, actual access to services among the homeless population is way down — except for hygiene services.. 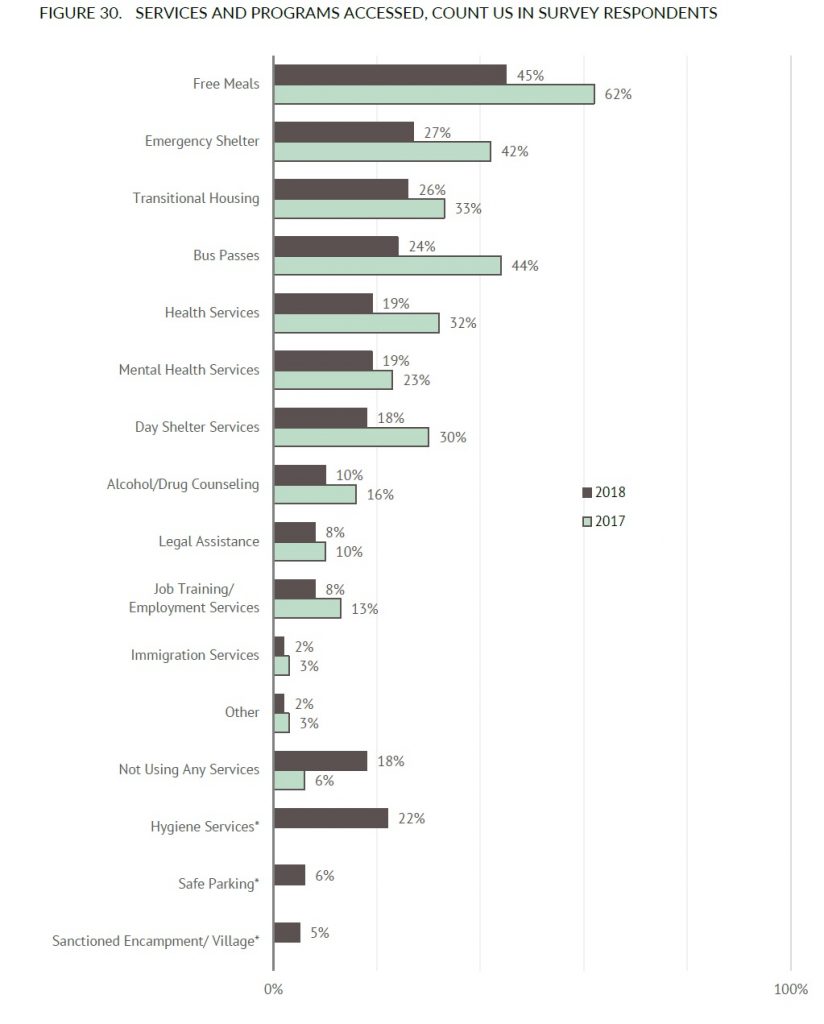 This is despite reports from homeless people that they are having slightly less issues accessing those services. 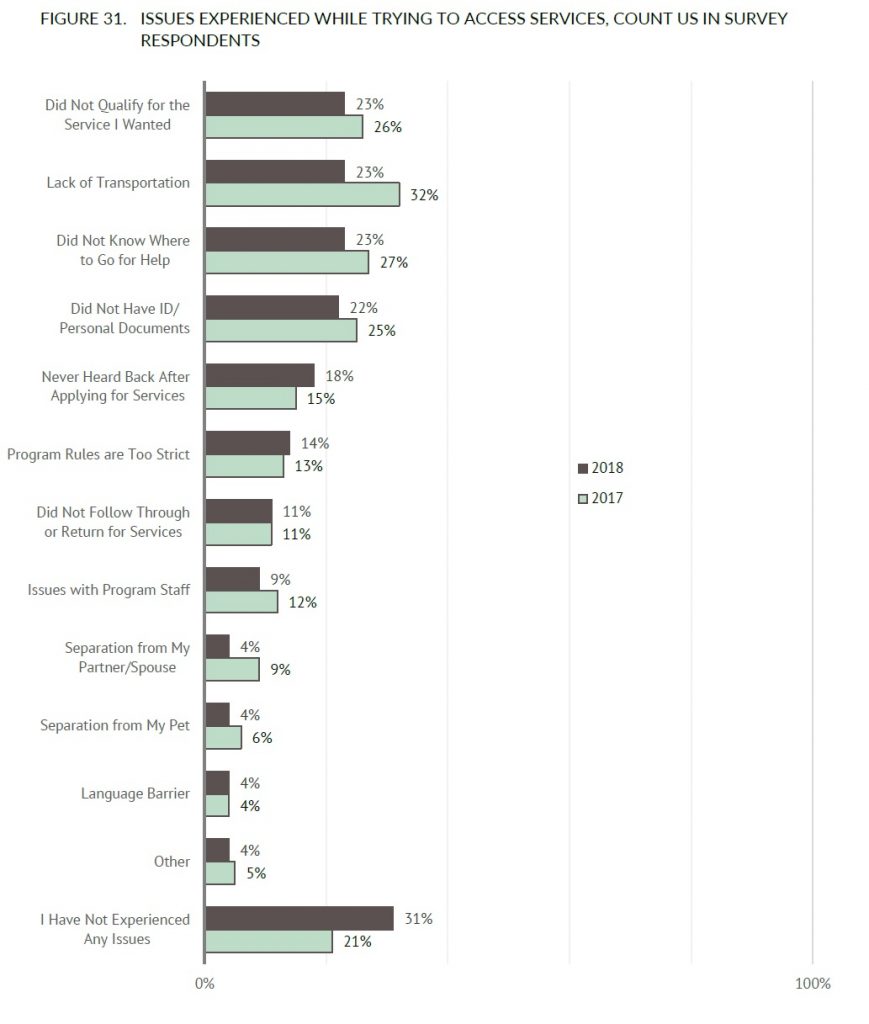 It looks like there’s a significant disconnect between the services being offered and the ones that homeless people think they need to actually exit from the system. 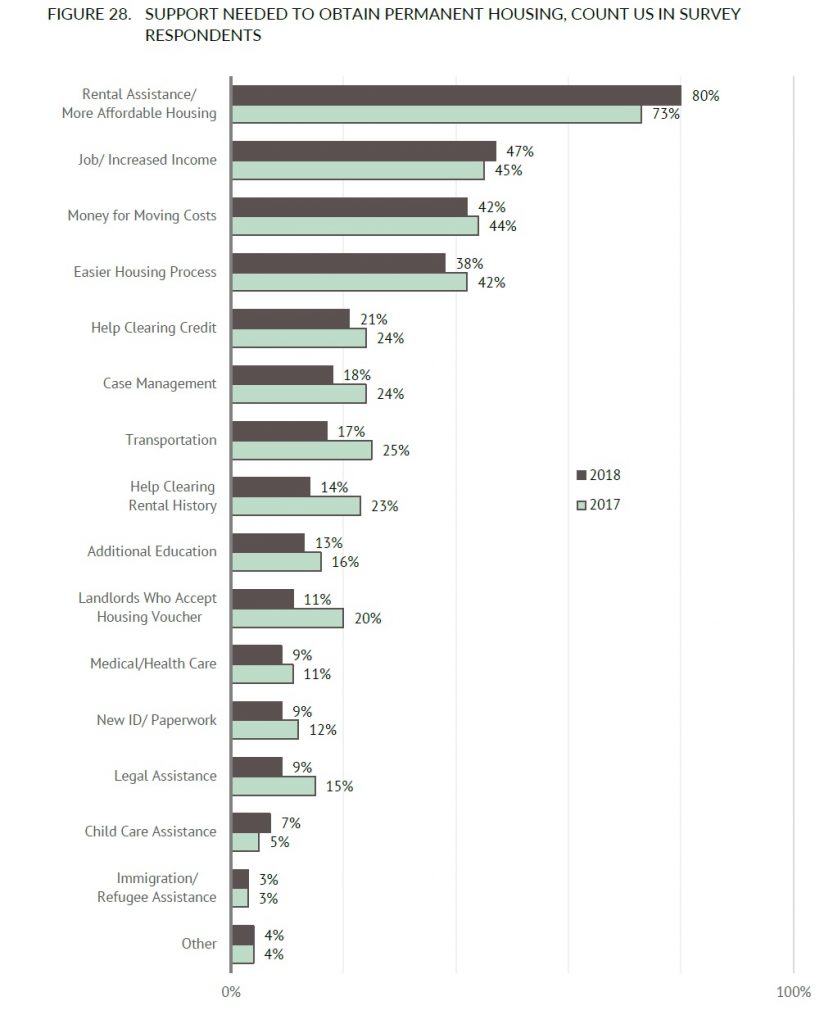 Employment.  The number of homeless people who are employed took a big drop. The survey question got tweaked this year so there’s a bit more granular information, but the picture is bleak: only 20% are employed, and only 5% full-time employed. 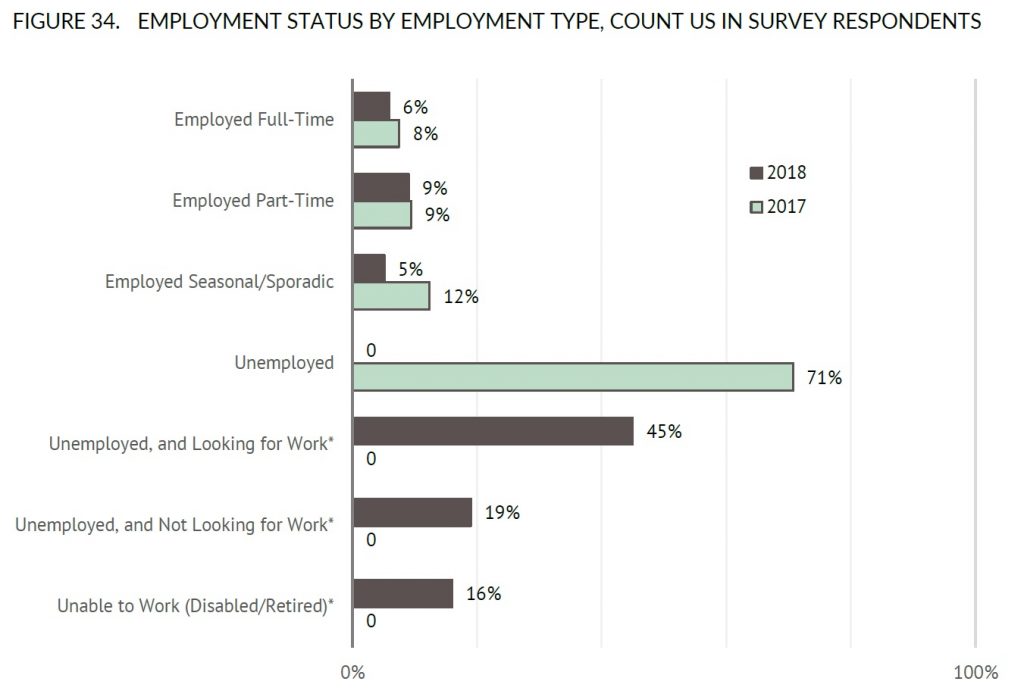 Now perhaps there’s a silver-lining: this may mean that once people get a job, they are exiting homelessness much more quickly. And we certainly saw earlier that losing one’s job is a significant cause of homelessness. But if that’s true, then the homelessness response must be about two things: affordable housing AND jobs. And we’re not paying enough attention to the second one. And the head tax opponents would go farther and argue that taxing jobs to pay for the homelessness response is counterproductive (I don’t think there is enough data to reach that conclusion, but it’s worthy of further analysis). Minimally, though, it looks like there are two essential components to exiting homelessness: affordable housing, and jobs. And our current homeless response ignores jobs.

Education.  This one chart jumped out at me.

It’s not entirely surprising, but nonetheless stark: the best insurance policy against homelessness appears to be a college degree. A high school diploma doesn’t cut it anymore. A logical conclusion would be that in today’s job market, a college degree is a the minimum bar for steady employment.

So what are the big take-aways from the Point in Time report?