At the beginning of June, King County cancelled its pending RFP for a “transit-oriented development” (TOD) affordable-housing project on county-owned property next to the forthcoming Northgate light-rail station, and said that it would be starting over with the process. Council member Debora Juarez, whose District 5 includes Northgate, is fed up with the delays on the project, and she and other city leaders are giving King County Executive Dow Constantine an earful.

The Northgate TOD project has been in the works since 2012 when the Northgate Link light rail extension was approved. In 2016, Seattle Mayor Ed Murray and Constantine announced that the city and the county would each be contributing $10 million towards the project, in the form of loan funding to build at least 200 affordable housing units. The original timeline called for soliciting a developer and signing a letter of intent in the fall of 2017.  The solicitation was published on October 31, with a well-attended information session on November 14th. By the January 18th deadline (extended from the original December 21st deadline), the county had received only two bids, from Lake Union Partners and Stellar Holdings. The county didn’t provide any specific timeline for when it would complete its evaluation and select a qualified bid (assuming at least one bid meets the requirements).

As the RFP makes clear, developing on public property is complicated. The County wanted to develop the property in two phases, on subdivisions of the available property. 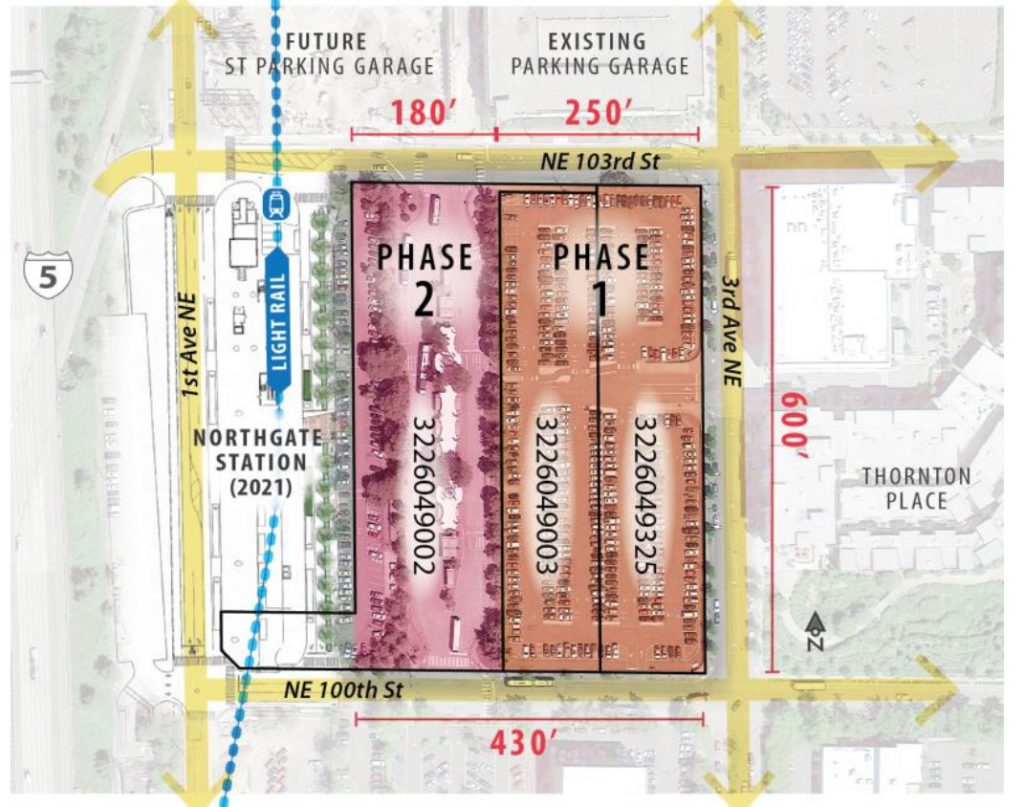 It hoped that phase 1 would be complete in time for the opening of the light rail station in 2021, and phase 2 becoming available for development shortly after phase 1 completes. 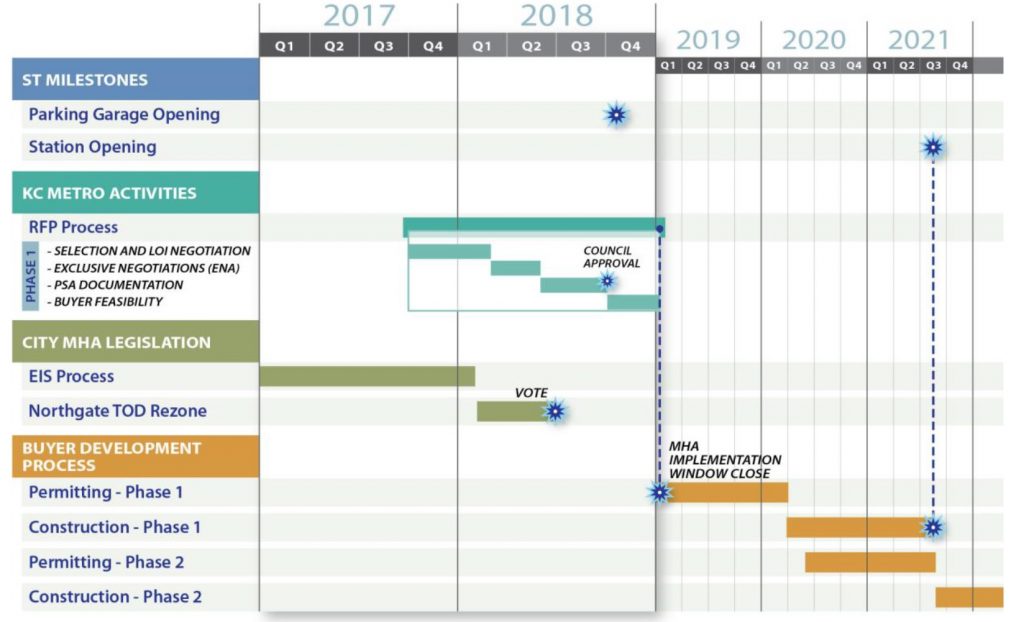 However, Simon Properties, the company that owns Northgate Mall, has a “right of first refusal” on most of the property designated for phase 2. Simon recently announced that they were planning a major redevelopment of the mall, shrinking the retail space and “building up” to add commercial and possibly residential space.

Adding to the complexity are the state and local laws governing disposition of public property. As the RFP explains:

Land next to a major shopping mall and a new light-rail station is very valuable, but the law required any developer who wished to lease or purchase it from the county to pay fair-market value. That makes it far more difficult to get the economics of an affordable-housing project to pencil out.

But there is good news: in March the state legislature passed a law (HB 2382) that allows county and municipal governments to give away land, or sell it at a discounted rate, for the purpose of a “public benefit” — defined as the creation of affordable targeted at people with incomes at 80% of AMI or less. The intent was to solve the very problem described above, empowering local governments to provide a strong economic incentive for affordable housing projects.

HB 2382 wasn’t a surprise; it had been discussed for several months leading up to this year’s state legislative session and had been tracked closely by local governments as it worked its way through the legislative process. Nevertheless, after the Governor signed it into law on March 22, it still took King County two and a half months to decide to cancel and redo its RFP for the Northgate TOD project. And that is at the heart of Juarez’s complaint. “I think they kind of dropped the ball,” she said. “Someone over there should have been paying attention to what was going on in Olympia… A bill that’s been pending for several months, someone pulled their head up and said ‘oh gee.’ We’ve been talking about this for a long time. We were talking about it when SDOT and WSDOT were applying for federal funding for the pedestrian and bicycle bridge in 2012.”

When asked to explain why it took so long for them to decide to pull the plug on the RFP, a spokesperson for King County Metro was short on specifics. “There were several steps in the response and deliberation process, which required time to conduct. Additionally, the county wished to consider the new law, which went into effect June 7.” When pressed for details on the “several steps,” he responded, “While we were in the procurement process, we looked at the legal impact of the law, and discussed the opportunity of furthering the housing outcomes we wanted to achieve. Those steps took time.”

Juarez doesn’t hide her anger at the county’s handling of the RFP. “This is a textbook example of why people don’t trust government. Now the project is going to be delayed.” And she emphasized that the stakes are high; she sees the TOD project as a keystone effort that galvanized the support and coordination of several other Northgate partners planning their own projects (she supplied this fact sheet of community partners). She worries the TOD project delay may cause those partners to question their own commitment to the effort. “Delay turns into denial of a project. We still don’t have a timeline. It means denial for my community. It’s just going to sit there. All this momentum, energy, hours [of work] came to a halt when they reset the RFP. I’m disappointed that Northgate may become the textbook example of how not to do transit-oriented development. I thought we were going to be the shining example of how to do it.”

Since her June 8th letter to Constantine, Juarez says that the two of them have traded voicemails but not had a substantive conversation about how quickly the project will be restarted. This past Wednesday, Juarez sent a follow-up letter to Constantine, co-signed by Mayor Durkan and Councilmember Teresa Mosqueda, demanding that the County either reverse itself and accept one of the two previous RFP responses, or commit to re-issuing the RFP by July 31st. If it’s re-issued, she wants to see a commitment to contribute the land at a lower cost or free of charge as permitted by HB 2382. She also requested that the minimum amount of affordable housing units be increased from 200 to 500, with an emphasis on family-sized units for people earning 50% of AMI or less. Finally, she asks that the RFP require “an integrated and connected mixed-income and mixed-use development.”

The spokesperson for King County was noncommittal on if or when the RFP would be reissued, saying, “We are evaluating our options for moving forward as quickly as possible this summer.”