This afternoon, the City Council voted to send Seattle City Light’s 2019-2024 Strategic Plan out of committee and to the full Council for final approval on July 9th, along with some direction on how to address the power utility’s biggest issues.

Despite much hand-wringing over the past few weeks over the proposed rate increases over the next six years, the Council chose not to try to modify them, opting instead for two smaller changes in the plan itself:

As you can see from the utility’s financial model, Seattle City Light is getting squeezed by a number of factors:

Retail consumption is declining. This has actually been a long-term issue, but it’s been masked by poor forecasting by the utility and high volatility due to weather changes from year to year. But in the last year SCL has revised its forecasting model, and the new one shows a clear expectation for consumption to continue to decline due to increased conservation measures, despite significant growth in Seattle’s population.

(note: this graph is not zero-based, so it dramatically exaggerates the changes in consumption)

Wholesale sales are also declining.  For years, SCL’s ability to sell excess power capacity to other utilities allowed it to compensate for the decline in retail revenues. But the dramatic increase in solar and wind production over the past decade has dropped the market price for wholesale energy — an in turn the total revenues that SCL derives from the wholesale market. It projects it will sell $55 million in 2019, but only $40 million in 2024. By entering the Energy Imbalance Market (EIM) it hopes to generate some new wholesale revenues, but the long-term trend is bleak.

Capital costs are high. A power utility — especially one that owns and operates its own power-generation facilities — is a very capital-expensive business, and one that requires constant re-investment in maintenance, replacement and upgrades of its capital assets.  The exact amount varies a bit from year-to–year as specific assets reach the end of their life and need replacing; SCL’s total capital investment is expected to decline a bit in 2019, then stay fairly steady through 2023. 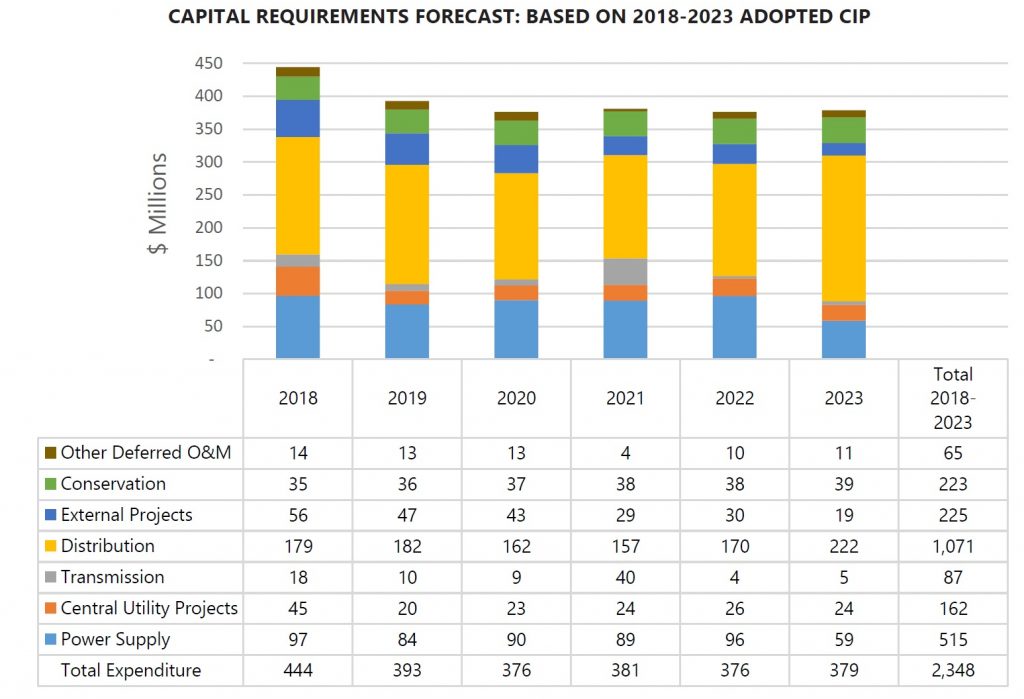 At this point, one might think “if consumption is declining and capital costs are high, why doesn’t the utility sell off some of its power-generation facilities?” It’s a fair question, but in truth SCL’s cost for generating power with its own facilities, including capital costs, is still far cheaper than the cost to acquire the same amount of power on the market. Also, SCL’s power sources are clean, green hydroelectric generators, which are highly desirable, and it means that the utility doesn’t have to pay for carbon offsets for fossil-fuel consumption.

You can see from the chart above that the big capital expense is distribution: the network of wires, substations, and other equipment that delivers power to our homes and workplaces. That’s the part of the system that the utility has the least flexibility on; without it there would be no customers, no consumption, and no revenues. And Seattle’s low-density sprawl works against the utility, requiring more distribution infrastructure to carry power to all of its customers.

This level of annual capital investment is beyond what SCL can sustain directly with revenues, so it issues 30-year bonds to amortize the costs over the long term. But the debt service for those bonds is accumulating at a rather startling pace; in fact, nearly half of SCL’s increase in expenses over the next six years is the expected increase in debt service. This is exacerbated by a requirement that the utility budget 180% of the expected funds it needs to cover debt service in any given year, so that credit ratings agencies feel assured that there is no danger it will default on its debt. In return, SCL gets low interest rates on its debt, which saves it money on debt service. The extra 80% ends up being invested in the next year’s capital expenses, reducing the amount of bonds issued. Nevertheless, by 2024 SCL’s annual debt service expense alone will be nearly half a billion dollars. 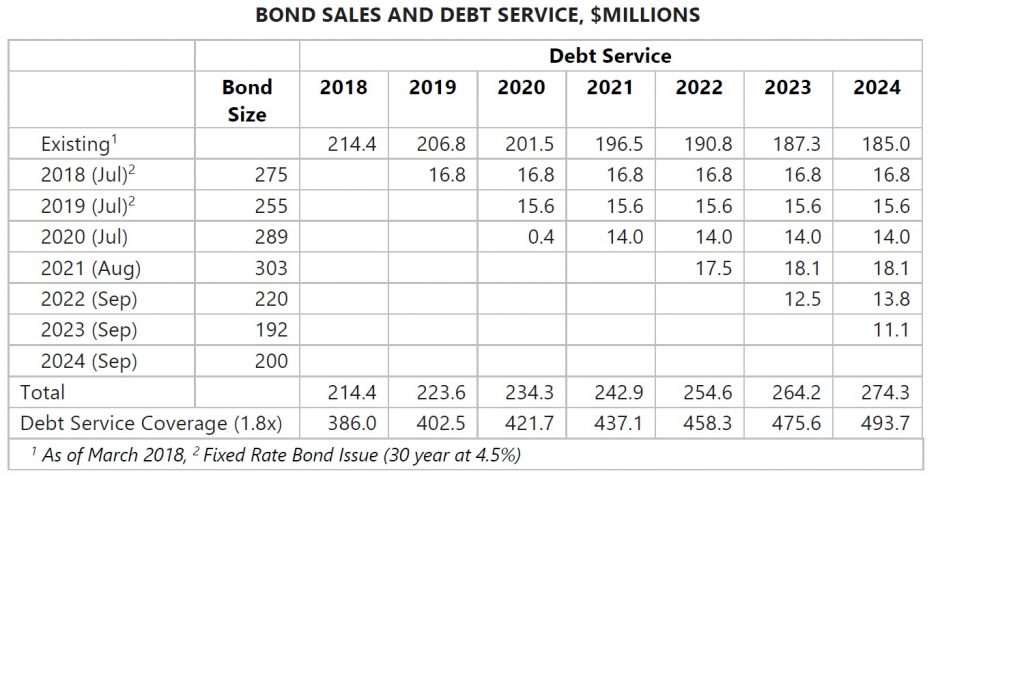 The rest of the financial model is pretty straightforward math. Add up all the expenses, and you end up with how much revenues SCL needs to raise — $992.7 million next year, rising to 1.089 billion by 2024. 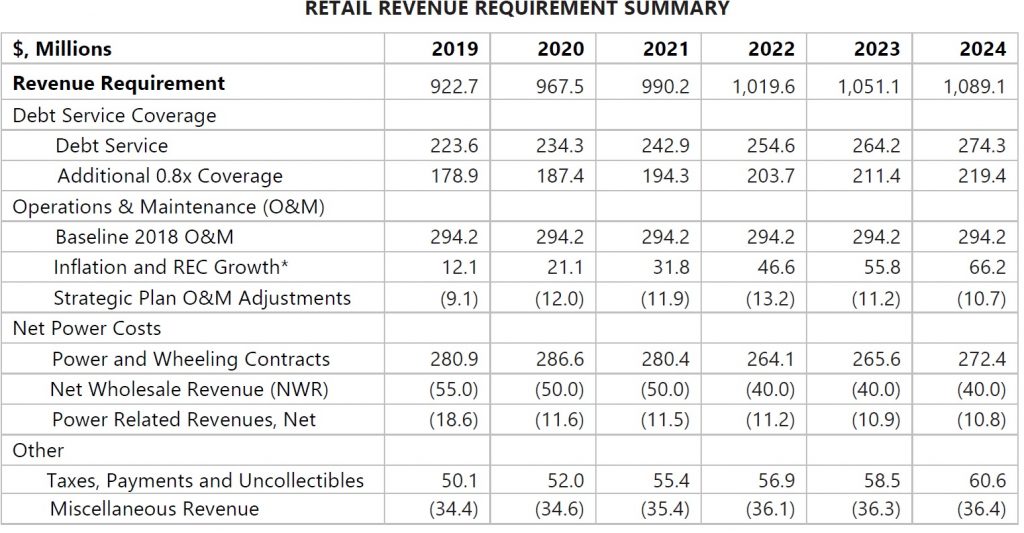 Then divide by the consumption, and you get how much you need to charge per kilowatt-hour — and how much rates need to increase to hit that number. It works out to an average 5.8% increase next year and 5.4% increase in 2020, with smaller increases expected after that.

Those are the numbers in the strategic plan that the Council voted out of committee today. But I lied a bit; the math behind the rate calculation is more complicated, because SCL has different customers that not only get charged different rates per kilowatt-hour, but also see different models for how they are charged. There are many factors that can be incorporated into a rate design; for example, you can have a flat base “connection fee” and then a consumption-based charge on top of that, or you can skip the base fee and just charge (more) for consumption. Some argue that the base fee is fairer in an environment where people are installing their own solar panels but also want to stay on the power grid. Others argue that having a base fee is more burdensome on lower-income customers and provides less incentive to conserve energy.

You can also have tiered rates, depending on level of consumption, which has the nice side benefit of incenting conservation measures. Commercial, industrial, and residential customers can also have different rate designs. You can also charge more at peak usage times; utilities like SCL need to make sure that they have enough power generation to cover their peak usage, so incenting people to move consumption to off-peak hours reduces the power generation peak — and in turn capital costs for the utility. SCL also has a Utility Discount Program for low-income customers. The utility also offers higher-cost electric service for certain customers (like hospitals and data centers) that need a guarantee of highly reliable power.

Seattle City Light hasn’t made a major modification to its rate design in several years, but there is a general agreement that it’s time to look hard at it, given the new realities of the business. It’s a bit like shuffling the deck chairs on the Titanic: it will neither increase consumption nor decrease expenses, and as such won’t solve any of the fundamental issues in SCL’s business model. But it will drive political and policy decisions about which customers will bear the cost for the needed increase in revenues.

The Council is asking the Seattle City Light Review Panel, a collection of analysts, advocates, and representatives of the utility’s various classes of customers, to lead a six-month investigation into new rate designs, with a draft report due on January 15, 2019, and a final report by April 1. The Council hopes to consider and act on the Review Panel recommendations by July 15. The Review Panel will involve community organizations in the process, including a coalition that has already been lobbying the Council on potential rate changes.

But it won’t be easy: much as with the Progressive Revenue Task Force, this group will need to recommend who should pay more, and who should pay less. Any no one will want to pay more. The good news is that unlike the PRTF, the Review Panel has broad representation; still, none will want to be perceived as not standing up for the financial interests of the customer segment they represent. Don’t be surprised if they present a series of options that cover the spectrum, and punt the hard decisions back to the City Council.

So that’s what we have to look forward to: a 5.8% average rate increase next year, and an inevitably political process this coming fall and winter for determining a new rate design plan for Seattle City Light. Council member Sawant has already staked out territory: she has pushed for quite some time for residential, commercial and industrial customers to be charged the same rate, even though the quantity of power they consume, the hours they consume it, and the infrastructure costs to serve them are all different.  But today, Council members Mosqueda, Gonzalez and Harrell all agreed that a single rate for all customers was a bad idea, and stripped out of the legislation a requirement that SCL evaluate such a single-rate plan (the requirement was a carryover from Sawant’s term overseeing SCL).

The Strategic Plan will come before the full Council for final approval on Monday, July 9th.