A proposed expansion of the city’s bike share pilot program passed out of committee this afternoon, even though two Council members believe it still needs work.

The vote came after a briefing from SDOT in which the department reviewed the learnings from its evaluation of the existing pilot program and its recommendations for next steps. To date, the Council has taken a very light touch, allowing most of the program’s rules to be set by “director’s rule,” rather than by Council ordinance. The proposed legislation continues that trend, updating the permit fee schedule to collect more revenues from bike share companies and authorizing SDOT to spend those revenues, but not codifying any other changes.

SDOT’s evaluation showed that there were 1.4 million rides taken on bike-share bicycles during the pilot period, and they happened across the city — albeit unevenly. They were heavily concentrated in the center city, the University District, and along the Burke-Gilman Trail. SDOT claims that the Rainier Valley, Industrial District, and Georgetown did better than they expected for quantity of rides, though the north and south edges of the city and Southwest Seattle were under-represented. 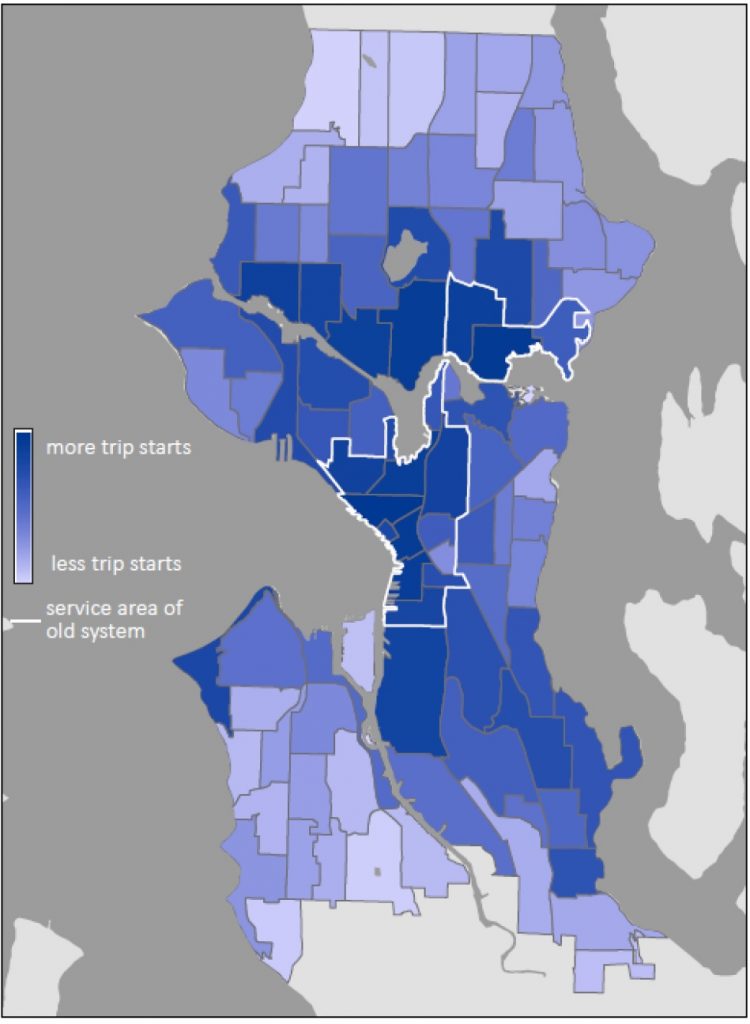 To no one’s surprise, the biggest challenge during the pilot was bicycle parking. Their evaluation found that 70-80% of bikes are parked correctly, 15-25% incorrectly but not fully blocking pedestrian access, and 5% fully blocking.

Those concerns, and the recognition that this is a rapidly evolving industry, has led SDOT to conclude that the permit system should be annual and competitive, giving the city a chance to also iterate relatively quickly as circumstances change and apply lessons learned.

In order to allow the system to expand, serve more people, and serve them better, SDOT plans to expand the system from the current maximum of 10,000 bikes to 20,000, split across four companies instead of the current three. The department believes this will also allow it to place new demands on permitted companies, including compliance and timely response, re-allocating bicycles to under-represented parts of the city, and rolling out programs for low-income residents to access higher-end bicycles that are more expensive to rent. SDOT also plans to increase the permit fee from $150,000 to $250,000 annually, raising $1 million that the department can use for administration, audits, and development of more bicycle parking spaces around the city. 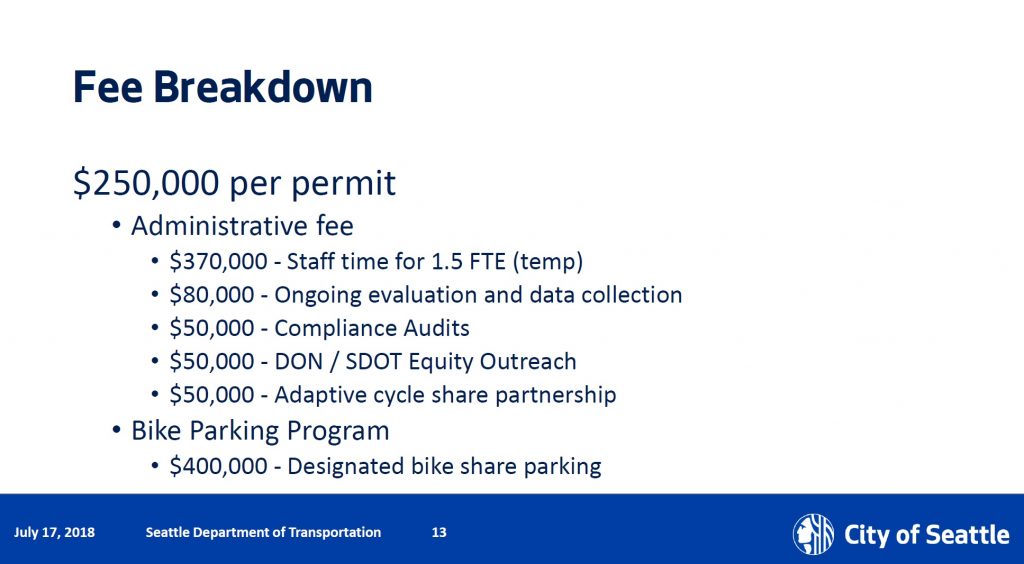 SDOT plans to hire a third-party company to conduct semi-annual audits of parking, bicycle maintenance, and data to ensure compliance, imposing stuff penalties to encourage good behavior on the part of the bike-share companies.

SDOT also plans to expand and evolve its current pilot program of bike share parking areas, as it continues to learn lessons from the five spots deployed in Ballard.

In order to meet its equity outcomes for the program, in addition to requiring companies to rebalance bicycles to underserved areas and offer affordable access to low-income residents, it will also require options for those without smartphones and credit cards. SDOT is also looking to partner to provide other accessible cycle form factors for those who can’t ride a standard bicycle.

Other changes the department is considering:

If all goes according to plan, SDOT will publish the new permit requirements and applications next week, and have new permits issued by August 31.

Both Council members Herbold and O’Brien showed some discomfort with the City Council’s lack of involvement in the rule-setting around the bike share program, and Herbold in particular voiced concern with raising the total number of bicycles deployed in the city to 20,000 when a plan doesn’t exist to even handle the 10,000 currently in circulation. She said that she will be considering additional amendments to the program’s authorization.

O’Brien was sympathetic to SDOT’s need to stay nimble and adaptive, but also expressed his desire to ensure that it was balanced with proper input. He said that he would prefer the permit issuance process include a true application and evaluation, rather than the department just issuing permits to the first four companies that request them. And O’Brien wanted to see the Transit Advisory Board and the Pedestrian Advisory Board have seats at the table during those evaluations, before permits are issued.

The public comment session at the beginning of the meeting included several people complaining about ride-share bicycle parking. It also included a rehash of an ongoing debate about whether helmets should be required by law in the city. On one hand, several representative from the Brain Injury Alliance of Washington argued that the current helmet laws provide important protections and save lives. On the other side, advocates for scrapping the helmet law argued that in cities without helmet laws, the rollout of bike share programs has not led to an increase in bike injuries — the explanation being that having more bicyclists makes the roads safer for all cyclists since vehicle drivers are more aware of them. The Brain Injury Alliance reps countered by admitting that the number of injuries had not gone up, but the severity of injuries had. The Council chose not to engage on that issue today, and likely won’t anytime soon.

The Council voted the bill out of committee today, sending it for final approval on Monday afternoon to try to meet SDOT’s schedule for permit renewals. Expect, though, that both Herbold and O’Brien will offer some last-minute amendments before they take their final vote.