It’s been a frustrating couple of years for downtown bike commuters. After the city adopted the Center City Bike Network plan in 2016 with a goal of having the network implemented downtown by 2020, later that year it put the plan on hold while it worked on the “One Center City” plan. Then the One Center City plan came out last year, including a recommendation for a two-way protected bike lane along 4th Avenue to be implemented this year. But in April SDOT announced that the 4th avenue bike lane would be postponed until 2021, after the “period of maximum constraint.”

In response to outcry from the bicycle community, Council member Mike O’Brien has been negotiating with SDOT a resolution laying out a timeline for implementation of pieces of the center city bike network over the next few years. Today that resolution passed out of committee, and is headed for approval by the full Council on July 30th. 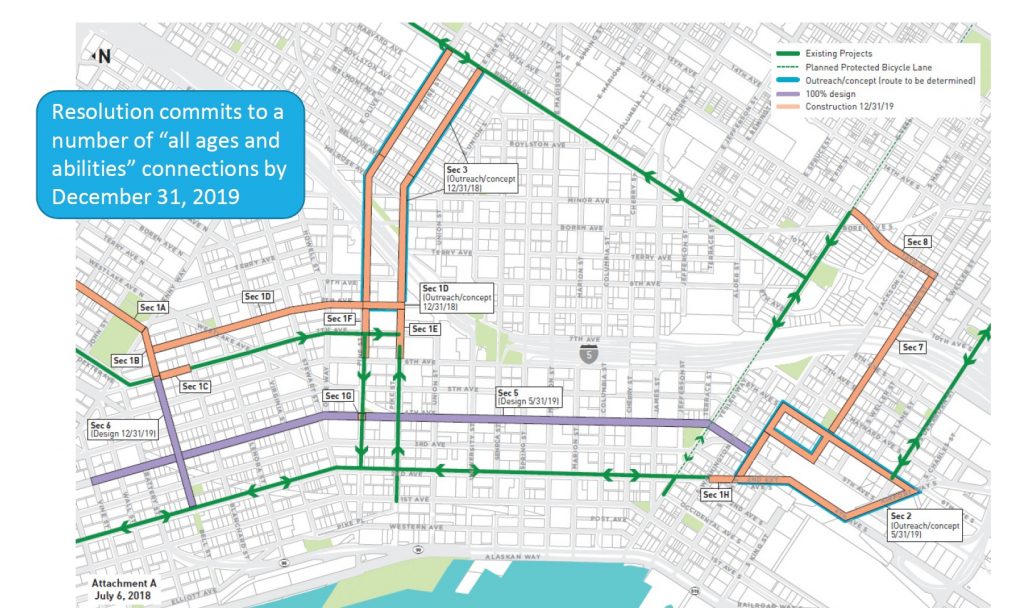 The resolution attempts to be prescriptive in committing the city to meet design and buildout milestones by specific dates. It identifies eight specific routes:

The resolution specifies that the bike facilities should be for “all ages and abilities,” rather than just for confident, experienced cyclists. It also requests that SDOT update its Traffic Control Manual for On-Street-Work by September 1 to ensure that when street work encroaches on a bike lane, an alternate route that is accessible, safe and clearly defined will be provided. And it requests quarterly updates to the Council on progress toward hitting these milestones.

O’Brien, along with bicycle advocates including Seattle Neighborhood Greenways and Cascade Bicycle Club, celebrated the resolution’s passing out of committee this afternoon.

There are, however, a couple of caveats worth noting. First, in the meeting today SDOT’s Darby Watson expressed concerns with the department’s ability to hit all of these milestones — though she declined to specify those concerns, preferring instead to communicate them in private to O’Brien at a later date.  Second, this is only a resolution and is nonbinding; if SDOT misses deadlines, nothing happens. The City Council could instead place provisos on parts of SDOT’s budget that would limit spending on other projects unless the bike network milestones are met, but at least at this point it has chosen not to do so. We’ll see if O’Brien chooses to propose budget provisos to that end in this fall’s 2019-2020 budget development process.

Neither the resolution nor the discussion today touched on costs for building out the bicycle network, despite that being one of the stated reasons for the recent delays in building it out.

The resolution will come before the full Council on July 30th for final approval; O’Brien allowed an extra week so that other amendments could be explored and circulated before the final vote. After that, the first quarterly report will be due on September 1.