When Judge James Robart found the City of Seattle in initial compliance with the consent decree earlier this year, it started a two-year countdown for a “sustainment period” before the consent decree is lifted. During that period, the city agreed to provide quarterly reports detailing status of reform efforts, statistics on policing and use of force, and continuing efforts to reform the police department’s practices.

The first of those reports was filed with the court on Tuesday. The department also submitted some proposed changes to its “use of force” policy for Robart’s approval.

The report begins with statistics on use of force by SPD. To-date this year, the use of force by police officers are roughly consistent with the past few years — though it’s still too early in 2018 to know how the year will finish out.

The overall trend (if there is one) is a bit bouncy from year to year, and the total number of uses of force might be ticking up this year. But according to SPD’s use of force dashboard, over the last five years, there is a clear downward trend in use of the more severe forms of force. The big variation is in “Type I,” the least severe (the blue line). Type II is clearly headed down, and Type III the (red line) and “Officer involved shooting” (the orange line) are nearly negligible.

Looking at the relative proportion of the different types of use of force shows that SPD is overwhelmingly using minimal amounts. 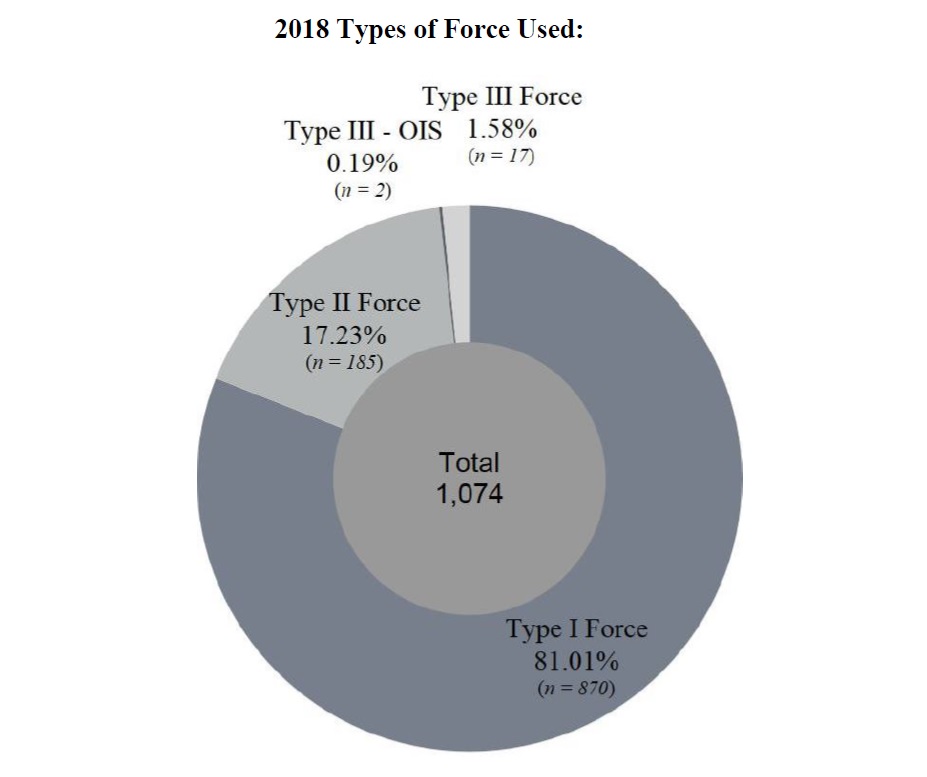 But the bigger pattern is that use of force of any type is extremely rare. According to SPD data, so far this year there were 231,348 events where SPD officers were dispatched, and only 657 involved any use of force (to reconcile with the above numbers, some events involve multiple uses of force). Of those 657, only 95 were Type II, III or an officer-involved shooting). 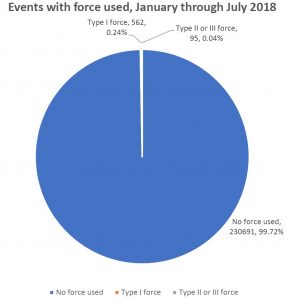 To be clear: this doesn’t imply that the uses of force that did occur were all justified or of an appropriate level of severity; it just says that use of force by SPD isn’t frequent.

The quarterly report provides similar statistics for events involving a person in crisis. The use of force is similarly small: out of 6,134 events, 99 involved use of force. 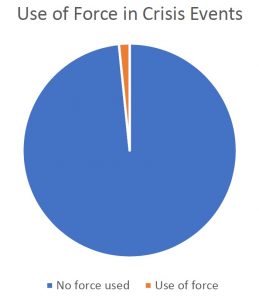 The report touts the investment that SPD has made in training officers in crisis intervention. 55% of all officers, and 71% of patrol officers, are now certified. 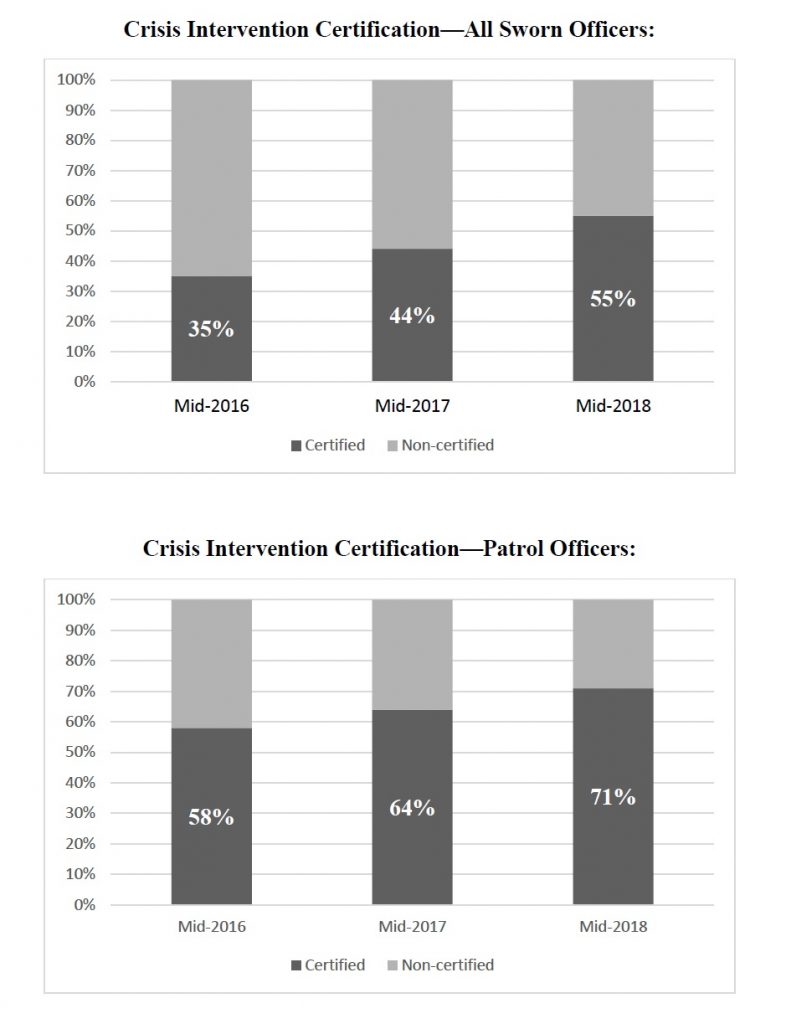 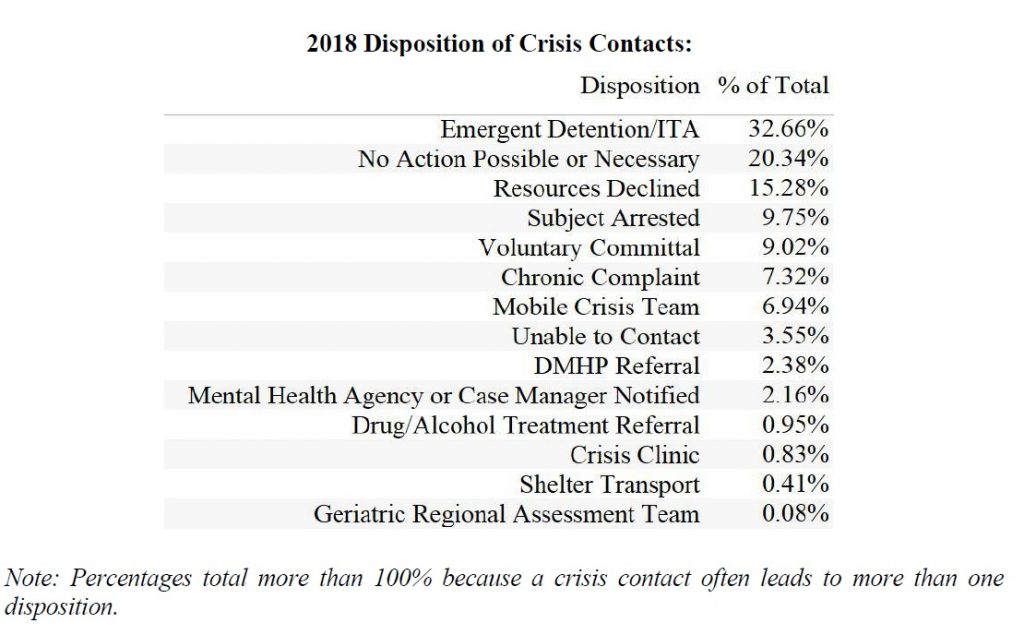 Unfortunately, African Americans are still overrepresented among the people subjected to use of force. 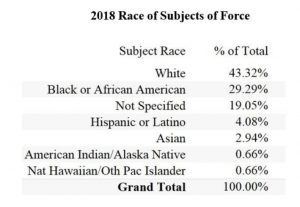 The report lists some of the recommendations that have recently implemented after review of use-of-force incidents:

So far, the Office of Police Accountability (OPA) has completed more than 140 investigations, of which 95 involved one or more allegations of inappropriate use of force — 257 allegations in total. So far, OPA has sustained 12 of those allegations.

Finally, the report gives a quick update on the contract negotiations with SPOG, the union representing SPD officers. It says that the negotiations are active, including “multiple sessions this week,” and the parties “have made significant progress toward an agreement.” Those negotiations have included the implementation of the city’s police accountability ordinance, which is still waiting for Judge Robart’s approval; he is withholding it until the contract negotiations are complete, though he has made his impatience known. The discussions around the accountability ordinance involve civilianization in OPA, the establishment of the Office of the Inspector General (who has already been hired), and full implementation of body-worn cameras by all officers.

Alongside the quarterly report, SPD also submitted proposed changes to its “use of force policy” that have been vetted with the appropriate stakeholders. Among the changes that the department hopes Robart will approve:

The city has a hearing with Robart tomorrow morning related to a delay in getting a member of the monitoring team access to SPD’s Data Analytics Platform. We’ll see if the judge has any comments on either the quarterly report of the proposed changes to the use of force policy.