This afternoon, the Council voted 8-0 to pass into law an ordinance temporarily extending the protections of the Pike Place Historical District to the site of the Showbox through the creation of a “study area.” 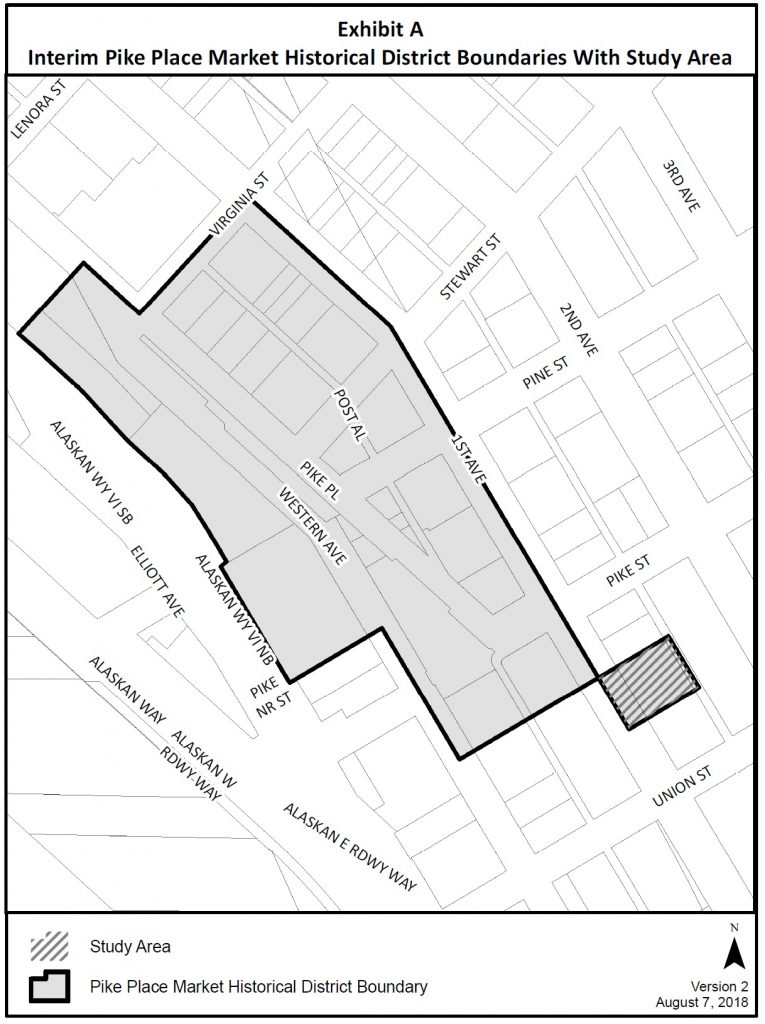 Late last week and over the weekend there was a great deal of maneuvering, culminating this morning with the Council being briefed by the City Attorney’s Office and several last-minute amendments gathered into a substitute version of the ordinance, which was the version approved by the Council this afternoon. Among the changes in the most recent version:

The work plan is intended to meet a state law requirement for interim zoning changes that last longer than six months. However, the Council has not budgeted any funding for executing on the work plan, which is supposed to begin immediately.

The emergency declaration, which Sawant said this morning was at the recommendation of the City Attorney’s Office, is intended to allow the City to exempt its action from SEPA review under Title 197 of the Washington Administrative Code. The code says that emergency exemptions apply when immediate action must be taken “to avoid an imminent threat to public health or safety, to prevent an imminent danger to public or private property, or to prevent an imminent threat of serious environmental degradation.”  The final ordinance tries to meet this bar by declaring:

Recent development activity adjacent to the District has put potentially eligible landmarks at risk of demolition or alteration before the protections of the district may be applied, thus constituting an emergency pursuant to WAC 197-11-880.

Demolition or alteration of the Showbox is certainly not a threat to public health or safety (actually just the reverse; it’s on the city’s list of buildings with unreinforced masonry that is likely to suffer major damage in a seismic event). It’s not a threat of serious environmental degradation. That leaves “imminent danger to public or private property,” which is a huge stretch of the imagination given that it’s neither imminent (in the most optimistic case, it will take months from when the permit application is submitted to when a permit is actually issued) nor a true “danger” — an owner/developer wants to use legal and safe construction methods.

An attorney for Roger Forbes, the current owner of the building who is trying to sell it to Onni Development, sent Council President Bruce Harrell and City Attorney Pete Holmes a letter over the weekend noting that the ordinance was on shaky legal ground and asking them to hold off on the legislation while other discussions were moving forward. “It is important for all parties involved to be heard fairly and accorded consideration and for rights to be recognized and protected. Process should be afforded and both procedural and substantive fairness observed.”

The letter also references a ruling handed down by the Washington State Supreme Court just last week that recognizes property owners’ fundamental rights and slams Thurston County for its attempts to deny those rights through a series of convoluted bureaucratic moves. The Seattle City Council’s omission of funding for the work plan it calls for similarly calls into question its own motives for creating an interim “study area” — and opens it up for legal challenges.

Nevertheless, the Council moved forward; in fact several Council members doubled down on the idea. Council member Herbold cited the Office of Arts and Culture’s CAP report from last year as highlighting “why this is an issue that is so much larger than the Showbox.” She rejected discussion of allowing Onni to construct a new building with a new Showbox on its ground floor, calling it a “hollow effort” and saying that there are things in the current structure that are important to keep such as its spring-loaded floor. Council member Baghsaw said, “Preserving the Showbox and its history and culture is going to take every tool in our book.” Council member Sawant, the bill’s sponsor, said that the effort is not about change, but rather about “on whose terms does change happen in Seattle?” Council member Gonzalez said, “I’m glad that we can hit the pause button and send a message to those who want the Showbox to go away that the Showbox isn’t going anywhere.”

And then a strange thing happened. Recognizing the strength of the grassroots group of “Save the Showbox” activists, three Council members — Mosqueda, Juarez, and Sawant — all tried to recruit them to their own advocacy agendas. Mosqueda urged them to join the fight for increased density and affordable housing; Juarez asked them to support indigenous people’s rights when those issues come up; and Sawant invited them to join her “people’s budget” movement to re-establish the “Amazon tax.”

As of this writing, Mayor Durkan has given no indication as to whether she intends to sign the ordinance into law — which is somewhat a moot point, since it has a veto-proof majority. Durkan has sent her own staff to try to negotiate a solution with Onni that would avoid legislation (and potential court battles). It may be that the now-very-real ordinance puts pressure on Onni to come to an agreement quickly. Alternatively, this all may just end up in court.