This afternoon, the Mayor’s Office released a summary report by KPMG on its analysis of the Center City Streetcar project.  While it is still working on an analysis of the impact of buying longer, heavier streetcars, there’s plenty of other bad news, and no timeline for a decision on whether to continue forward with the project.

In a press briefing this morning, Mayor Durkan, City Budget Director Ben Noble, and SDOT Interim Director Goran Sparrman laid out six issues with the project, and what KPMG and their own staff had discovered:

The KPMG report didn’t take a side on the issue that started this controversy: the ongoing dispute between SDOT and Metro on annual operating cost estimates (SDOT said $16 million; Metro said $24 million). However, it did say that SDOT’s estimate was “reasonable.”

All this points to a big decision that Durkan will need to make this fall as to whether to go ahead with the Center City Streetcar project. She refused to put a timeline on the decision, but said that she wanted to put all the information out in public view, then listen to feedback from the community and stakeholders. “Clearly the project is more expensive than the people were ever told,” she said.

She also emphasized that both options — moving forward or stopping the project — have fiscal impacts. There are sunk costs already for the project, including some necessary utility work such as replacing “historic” wooden pipes in Pioneer Square. 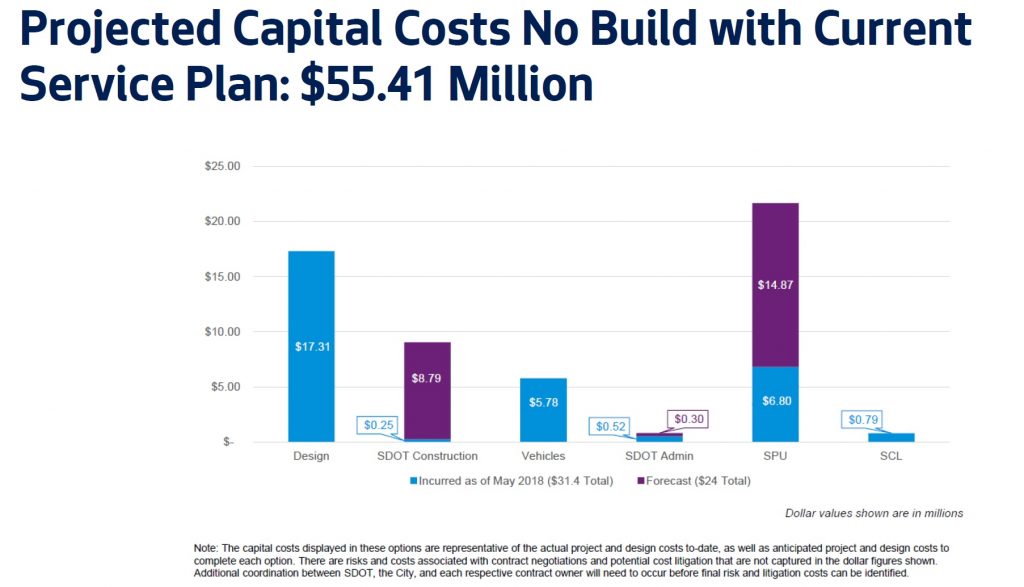 She suggested that part of the equation for her would be to look at needs in other regional transit projects that may not be fully funded or that the city might want to pitch in for to help influence the outcome (such as light rail to West Seattle and Ballard).

As part of their analysis, KPMG suggested a slightly lighter-weight plan as a third option. It would still build out the track, but would reduce service in non-peak hours, thus curtailing both capital costs (by requiring fewer trains to be purchased) and operational costs (fewer workers, less maintenance). Ridership estimates are slightly lower than the original plan, but the bottom-line numbers are much improved.

Despite accusations from transit advocates that Durkan is anti-transit, the words she used this morning were remarkably pro-transit. “Transit is crucial to the future of Seattle,” she said, adding that the city needs to “move forward as fast as possible to get people out of cars.” Observing that every form of transit has subsidies and none fully pay for themselves, she said, “But transit is good. Just because it doesn’t run in the black doesn’t mean we shouldn’t do it.” She noted several other efforts her administration has been doing to prepare for the “period of maximum constraint,” including:

When asked how and why the streetcar project had gone wrong, Durkan said that while she believes the majority of SDOT employees are doing excellent work, she thinks that SDOT was not prepared to manage well some of its largest projects. She noted repeatedly that when she took office, the streetcar was never mentioned to her as having problems, and “there were questions that were never asked along the way.” Durkan said that the people who are now managing the streetcar and other large projects at SDOT are new to her administration, but she wouldn’t comment on whether the former managers had been fired.

Sparrman added a bit more color commentary on how SDOT ended up buying longer, heavier streetcars. He said that the manufacturer they had used for the previous two lines had caused several problems, including schedule delays, so they felt the need to find a new manufacturer. He also added that the “Made in America” requirements for FTA funding limited their options among the already-short list of potential streetcar manufacturers. In the end, the chosen vendor doesn’t make streetcars shorter than the ones the city purchased. That said, Durkan commented, “Bottom line: there’s no excuse that the streetcars don’t fit.”

Durkan was light on details for how she intends to gather public input once the ongoing analysis is complete later this fall; expect to hear more about that in November.

You can read the KPMG summary report here, and the city’s briefing slides (which borrow heavily from the KPMG report) here.