This morning, the City Council held a public hearing and discussion of the latest incarnation of a new tree-protection ordinance, but Council member Rob Johnson, the bill’s sponsor, made clear that it’s still months away from becoming law and may change significantly — again — between now and then.

The city has a stated goal of 30% tree canopy coverage city-wide; current estimates put it at 28%, but there are concerns that the construction boom across the city is pushing the canopy in the wrong direction.  Johnson has been working since February on an update to the city’s current tree-protection ordinance that would extend it to a much broader, and smaller, set of trees. But finding the right formula for doing so has been elusive, and Johnson has been forced to do several major rewrites over the past seven months.

His latest version, unveiled in mid-August, drops the current concept of an “exceptional” tree based on size, species, and “heritage” status, and replaces it with a simpler notion of a “significant” tree with a diameter (at chest-height) of 6 inches or greater. All significant trees would require a permit to be removed, as well as mitigation in the form of replacement trees or a payment in-lieu of replacement. In lots zoned for single-family homes, trees would need to be replaced onsite; in all other zones; they could also be replaced offsite or through an in-lieu payment.

The proposed ordinance creates two classes of permits: “minor” and “major” tree removals. A minor permit is required when removal of a significant tree would not push the canopy coverage on a lot below a specific threshold that is set by type of lot: 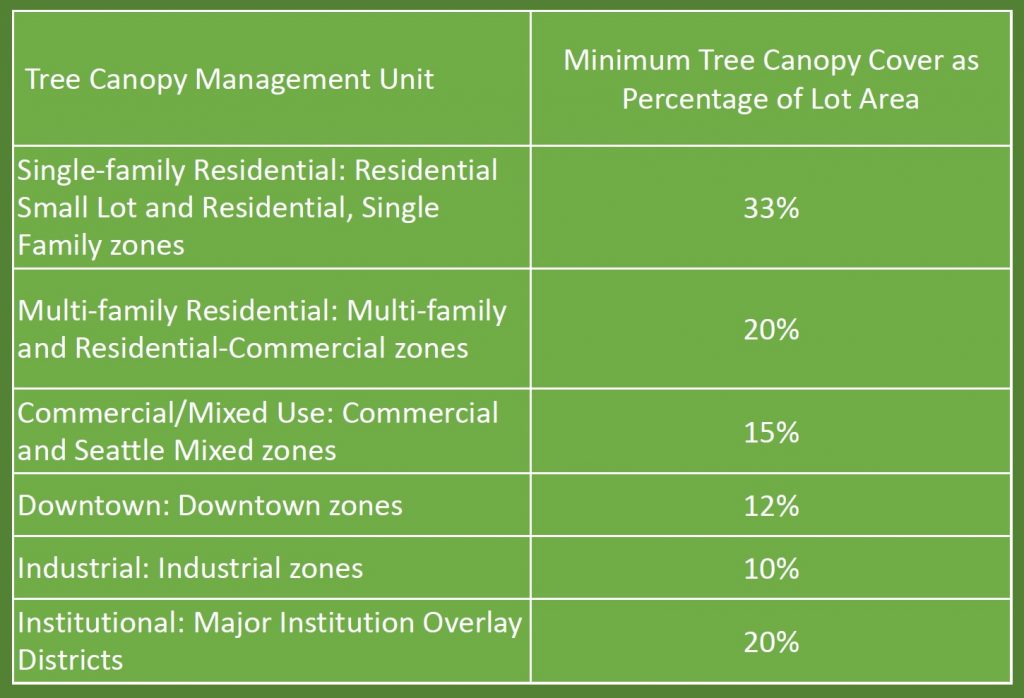 A major permit is required when removal would drop the site below the threshold. The approval criteria and mitigation requirements differ between major and minor permits. Both would require posting public notices on the property of the pending permit.

The proposed ordinance would also require everyone working on significant trees (including pruning or removing them) to obtain a license from the city; doing so would require written acknowledgment that the individual is aware of the city’s tree-protection ordinance.

It also clarifies the definition of a “hazard” tree that can be removed on an emergency basis before a permit is obtained. And it provides some flexibility for developers to ensure that the full building potential of a site isn’t compromised by tree locations; for example, if a significant tree, or a set of them, prevent a builder from utilizing the full FAR available on a site, then exceptions to rules preventing removal of those trees may be invoked by the city, though mitigation will still be required and the city staff would presumably first try to work with the developer to find a way to preserve the tree.

Last week the city’s Urban Forestry Commission weighed in on this version of the bill in a letter to Johnson and his colleagues.

While the Commission members appreciated the complexity of the subject matter and Johnson’s willingness to tackle it, and they liked some parts of the proposal, they had harsh words for the overall approach. Among their criticisms, many of which were echoed by the 40 people who spoke at this morning’s public hearing:

In addition to echoing the UFC’s comments, several commenters also urged the City Council to do a full SEPA Environmental Impact Statement for the ordinance.  Johnson has been resisting that because it would likely delay the passage of the ordinance another 12-18 months — potentially into 2020 (and after the next City Council election). He said today that he is trying to balance competing requests to “act with urgency to protect as many trees as we can,” with taking the time to get the legislation right.

Council member O’Brien also voiced his support for the UFC’s recommendations. In addition, he wanted to see the ordinance prioritize conifers and native species over deciduous trees and non-native species: conifers because they deliver more ecological value, and native trees for habitat.

The Council took no action today, and Johnson made it clear that they will continue the discussion but also take no action at his next committee meeting on September 19th. To date, they haven’t even introduced a bill into the Council’s official legislative process yet. Johnson acknowledged that they are not on a path to get it done before the Council puts aside everything to focus on the 2019-2020 budget, so he now expects to take it up again after the budget is done and hopes to have a bill adopted in December or January — if they aren’t forced down the path of a full EIS. Fortunately, that gives the Council and the staff at SDCI time to work through the myriad issues and try one more time to find an approach that will gain consensus support.