In June of 2017 the City Council passed a sales tax on sweetened beverages, to take effect on January 1, 2018. Now, with some initial data in hand, the Mayor and City Council are deciding how to spend the tax revenues over the next two years. But things haven’t turned out the way the experts predicted, raising questions about whether the “soda tax” was such a good idea in the first place. It equally raises questions about the motives of the city officials charting the tax’s future. 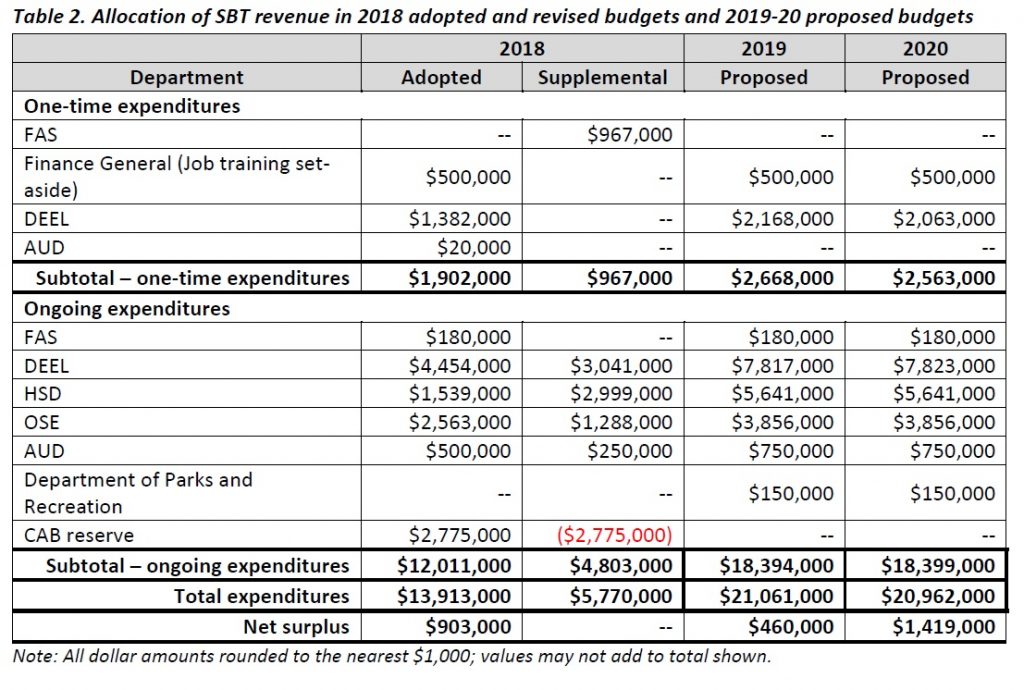 The sweetened beverage tax (SBT) was trendy but controversial from the beginning. Sponsored by former Council member Tim Burgess and following the example of Philadelphia and several Bay Area cities, it was touted as a public health intervention which would decrease the consumption of unhealthy sugared beverages by making them more expensive than healthier alternatives. However, those unhealthy drinks are disproportionately consumed by low-income consumers, making the tax a highly regressive one. Burgess and Council member Mike O’Brien conferred with leaders of the most impacted communities, who acceded to the tax on the condition that the revenues would be returned to the communities in the form of food access, nutrition, and health programs. The Council members also established a Community Advisory Board to provide recommendations on how a portion of the revenues should be spent. The Council considered a long list of potential amendments to try to lessen the most regressive aspects of the tax; in the end, however, they made it even more regressive by increasing the tax rate (O’Brien went to bat for this, to drive down consumption as much as possible) and exempting artificially sweetened “diet” drinks — all in the name of driving down consumption as much as possible. Council members also worked hard to get a piece of the revenues too for their pet causes: Juarez got a larger slice for food banks including North Helpline; Burgess took a cut for the Seattle Preschool Program; and Harrell funneled a part to the 13th Year Promise program. Recognizing that when consumption declined the tax revenues would also decline, 20% of the revenues were set aside for one-time expenditures that could be discontinued in the future. In the end, the final sweetened beverage tax bill passed by a 7-2 vote, with Herbold and Sawant finding it simply too regressive to support.

Fast-forward a year. As researchers begin to complete an initial round of studies on sweetened beverage taxes in Philadelphia, Berkeley, and other cities, a pattern has emerged: the tax drives down sales of the taxed beverages in the cities where the tax is imposed, but it increases them in the surrounding cities. More importantly, it doesn’t drive down consumption: caloric intake is nearly unchanged.

In Seattle, it was estimated that the tax would generate about $15 million in revenues in 2018, its first year in effect. But over the summer the City Budget office revised that estimate up to $20.6 million based upon revenues through the first half of the year. But equally important: based on expert advice, it abandoned the belief that the revenues (and the underlying consumption) would decline further over time. In fact, the city now projects annual revenue increases for 2019 ($21.3 million) and 2020 ($21.9 million).

And suddenly the SBT took on new prominence in this fall’s budget deliberations. The Mayor had a problem: after last fall’s budget debacle, the Council patched the budget hole with one-time funding for critical programs. The Mayor doubled down on that with her own mid-year budget requests, including her “Path to 500” surge in homeless shelter beds. But with a surprise excess in sweetened beverage tax revenues, she had an opportunity to replace the one-time patch with sustainable funding.

One problem: the sweetened beverage tax legislation constrains the use of the tax revenues to the list that had been negotiated with the community:

2. Evidence-based programs that improve the social, emotional, educational, physical health, and mental health for children, especially those services that seek to reduce the disparities in outcomes for children and families based on race, gender, or other socioeconomic factors and to prepare children for a strong and fair start in kindergarten;

3. Administration of assessing and collecting the tax;

4. Ensuring resources for the Office of Sustainability and the Environment and the Sweetened Beverage Tax Community Advisory Board;

5. The cost of program evaluations conducted by the Office of the City Auditor under subsection 5.B of this ordinance, including costs borne by other City departments in facilitating such evaluations.

While homelessness response programs are important, they aren’t included in that list.  So the Mayor’s Office used a time-honored trick: rather than use the excess revenues to increase spending on programs listed above, they substituted SBT revenues for more flexible “general fund” dollars that had been funding those programs, and then redirected the general fund dollars to replace the one-time funds for homelessness programs. It follows the letter of the law in that the SBT funds are all being spent on permitted programs, but it violates the spirit of the law — and the trust of the community members who insisted that the money be reinvested in their community. 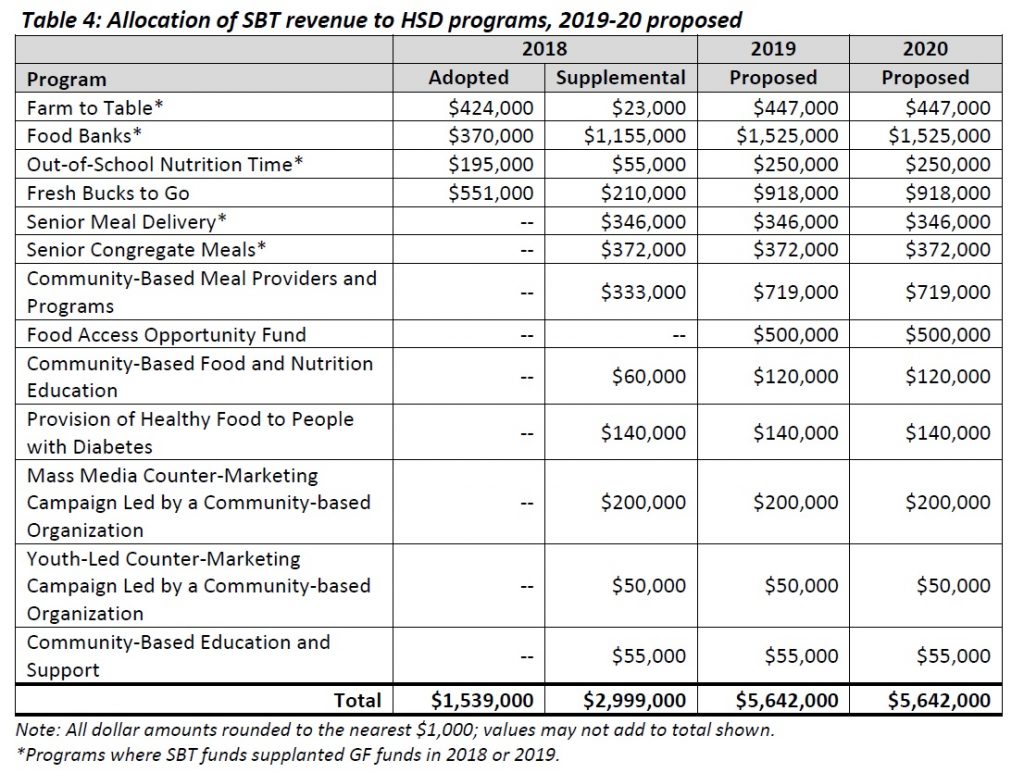 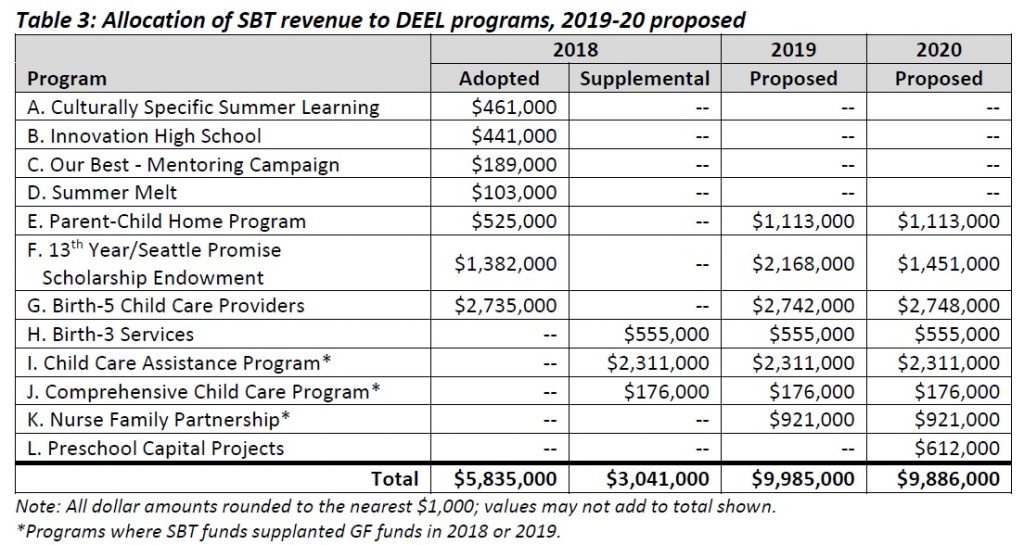 To make matters worse, the Mayor’s budget doesn’t follow the recommendations from the Community Advisory Board (CAB) tasked with guiding SBT investments.

Yesterday morning, the City Council held a Budget Committee discussion on the Sweetened Beverage Tax. There was much performative hand-wringing on the bait-and-switch of SBT and general-fund dollars the Mayor used to sustainably fund homeless programs, as well as the deviation from the CAB’s recommendations. However, they recognized that the Mayor had put them between a rock and a hard place: in order to unwind the bait-and-switch, they would need to reduce funding for homeless programs — a bad policy move, and political suicide for progressive elected officials.

Worse, none of the Council members were willing to speak to the policy failure of the SBT. In fact, just the opposite: they embraced it by buying in on using SBT revenues for sustained funding for critical programs, a big no-no if they still expected the revenues to decline over time.  The Mayor has also proposed reducing the 20% set-aside for one-time expenditures to 10%, another tacit acknowledgement that they no longer expect the SBT revenues to decline. None of the Council members balked at this.

The Council members and the Mayor are all smart and well-informed. They understand that they are pushing the city to be increasingly dependent upon sustained revenues from a highly regressive tax that is failing as a progressive policy initiative, and they are complicit in violating an agreement with the community on how those revenues should be spent.

We can understand how they arrived at this point: the city’s revenue growth has dropped down to about the rate of inflation, which means that the city isn’t gaining additional buying power. Any new expenditure, such as for homeless response, public safety, and transportation, requires either cutting somewhere else, or finding a new source of revenue such as the SBT. They are being pushed to fund many critical programs, and a pot of money is sitting in front of them.

You can read the Council’s budget memo on the Sweetened Beverage Tax here, and watch the video of their discussion on the tax here.