This morning, twenty four community leaders held a press conference to announce that they were collectively urging the City Council to reject the proposed contract with Seattle police officers.

At the press conference, held at El Centro de la Raza on Beacon Hill, the group released a joint letter they had sent to the City Council expressing their dissatisfaction with the tentative agreement with SPOG, the police officers union. Their concerns echoed those of the Community Police Commission (CPC), no surprise given that some of the community leaders also sit on the CPC.

Estela Ortega, Executive Director of El Centro de la Raza, began the press conference by explaining the organization’s custom of leaving an open chair in remembrance of those who could not be present; in this case, she called out John Williams, Charleena Lyles, and Che Taylor, who all died at the hands of Seattle police officers. 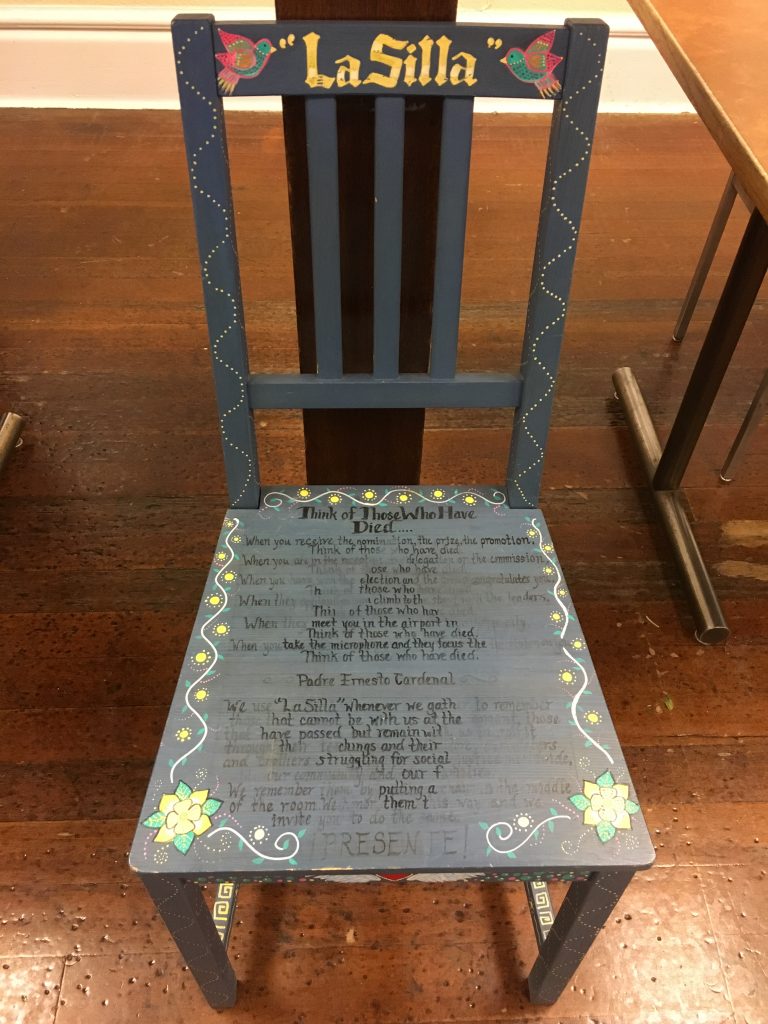 Ortega and the other speakers, including Michele Storms of the ACLU; Char Goller-Sojourner of the 2015 Walking While Black March; Rev. Harriett Walden of Mothers for Police Accountability; Andre Taylor of De-escalate Washington and Note This Time; and Diane Narasaki of the Asian Counseling and Referral Service, all spoke to importance of the 2017 police accountability ordinance in improving the community’s trust in the police. In their view, the tentative agreement with SPOG undermines that confidence.

At the same time, they were clear that they support better pay for police officers. They pushed for the same recommendation as the CPC: that the city and SPOG revise the contract to just focus on pay and other issues not related to accountability measures, then re-open the rest of the topics for re-negotiation.

The problem with that path, as some of the speakers noted, is that wages are one of the key tools for negotiating other concessions. With that off the table, it would be unclear what leverage the city would have to demand any concessions on police accountability.  Nevertheless, Lisa Daugaard, a CPC member and one of the authors of the letter to the City Council, said that she believes that this is a different situation and urged both the city and SPOG to sit down at the negotiating table without leverage and with “just goodwill.” “Finding common ground with the community is good for law enforcement,” Daugaard emphasized.

The Council is expected to vote on the contract next Tuesday afternoon at its weekly meeting. At this point, only Council member González has gone on the record to say that she intends to vote yes, and encourage her colleagues to do the same. She is one of five Council members who sit on the city’s Labor Relations Policy Committee and had a chance to review the contract before the Mayor announced that a tentative agreement had been reached. Given that, it’s generally believed that if the Council does not approve the contract at this stage, the city will have committed an unfair labor practice by not negotiating in good faith.

Today’s announcement further complicates the politics in Seattle, heading into an election year for seven of the nine Council members. The organizations represented by the twenty four co-authors of the letter carry a lot of weight in the city’s progressive circles, and contributed to getting many of the sitting Council members elected. However, at this point it’s not clear how many Council members will run for re-election next year. Rob Johnson announced this morning that he won’t run; we may see others follow suit shortly. For those that do, the head tax debacle and the lack of a major new initiative around affordable housing are leaving many on the city’s left flank feeling less enchanted with the current Council; a “yes” vote on the SPOG contract on Tuesday may be the straw that breaks the camel’s back. There are already a handful of candidates filed to run who generally lean to the right of the incumbents, but don’t be surprised if the races also draw candidates who are farther left if the city’s progressive advocacy groups give up on their current crop of elected officials.

If the Council does vote “yes” on Tuesday, the agreement will then be submitted to U.S. District Court Judge James Robart for his review as to whether it is consistent with the 2012 consent decree and the principles of constitutional policing.