The good news: Mayor Durkan now wants the project to move forward, and there are no engineering issues that can’t be addressed.

The bad news: the cost has gone up again.

There were three key pieces of information released today:

The engineering report begins by reminding us of the differences between the old and new streetcars:

They then looked at several issues, to identify and estimate the cost of solutions:

Clearances. The good news is that they found no clearance issues, with the possible exception of the 8th and Jackson turnout to the First HIll operations and maintenance facility, but there is already a rule in place preventing cars from being sideswiped there.

Track gauge. In a KUOW interview last summer Mayor Durkan hinted, without providing any explanation, that there might be an issue with the track gauge. I and many others laughed that off since track gauge has been a standard for ages at 1835mm or 56.5 inches. However, it turns out that based upon Portland’s experience with its streetcars, SDOT built out sections of the South Lake Union track and all of the First Hill track to a slightly narrower gauge: 1428mm or 56.25 inches.

This was because on standard gauge tracks Portland was observing excessive wear and noise on its streetcars’ wheels, and the narrower gauge reduced the problem. The engineering study determined that this would not be an issue for the longer, heavier streetcars, and the new track for the Center city project is planned for the narrower gauge. 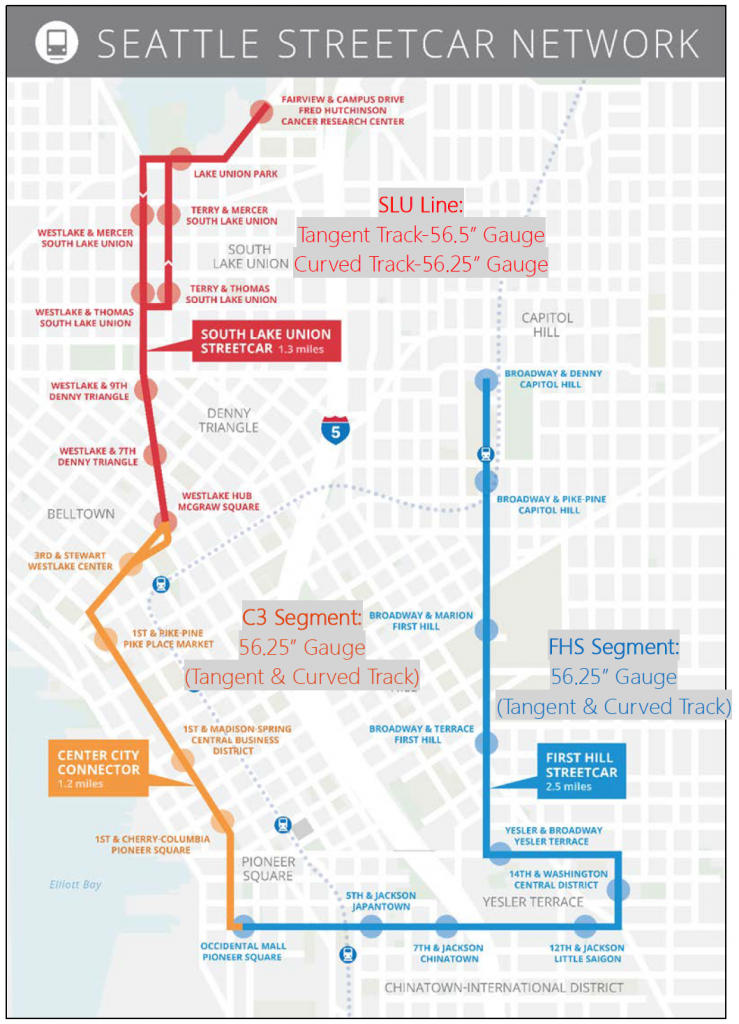 Station platforms. The study determined that five of the existing station platforms will need to be extended to accommodate the longer cars, at a total estimated cost of $500,000. Fortunately, there are no other clearance issues with the new streetcars.

Tail tracks. “Tail tracks” are single segments of track at the end of a line where the two tracks join together in a “Y” formation. That allows a train to pull in from one track, and exit to the other track to start a run in the other direction. The design for the existing lines built enough tail track to take two streetcars, so that if one broke down it could be parked at the end while another train in service still had enough room to pull in and move to the other track. However, with the longer streetcars, the existing tail tracks are not long enough to hold two streetcars. The two can be extended for a total cost of $500,000 to $800,000 (some other equipment must be added and moved beyond just laying down more track). It looks fairly straightforward for the First Hill tail track on Broadway, but the South Lake Union tail track on Fairview is more problematic because the extension would run across a pedestrian crosswalk/signal. 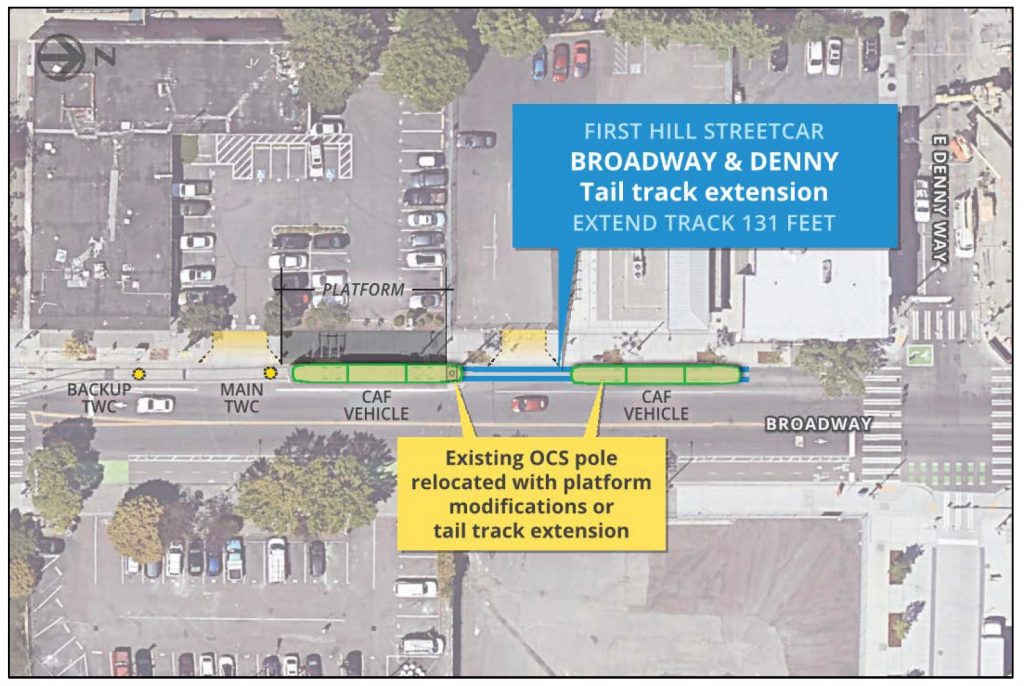 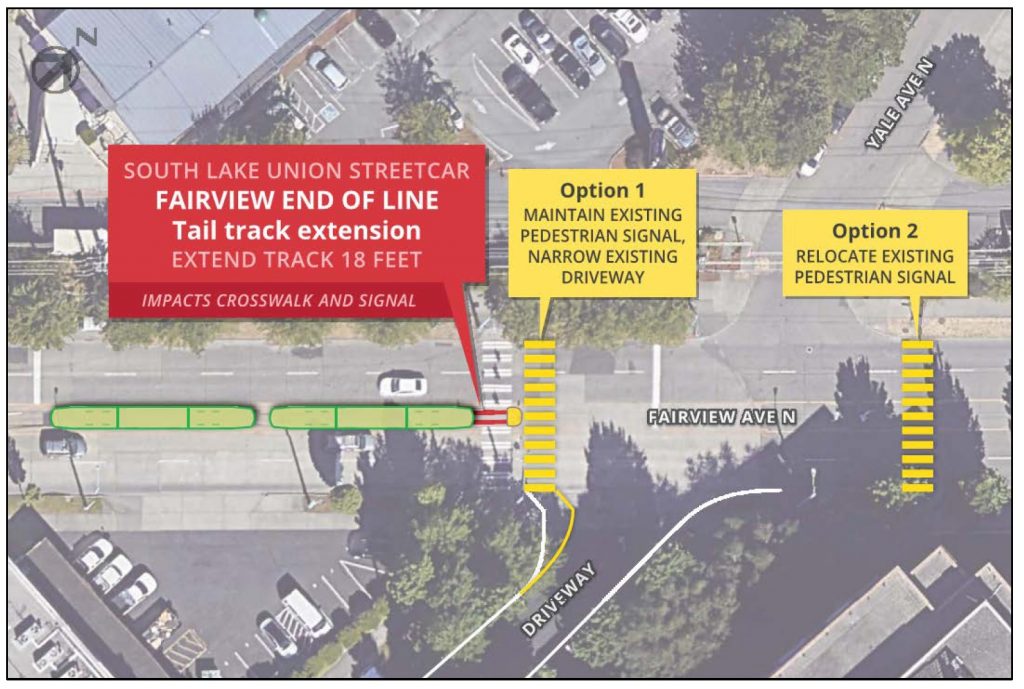 The operations and maintenance facility. The Center City Streetcar plan as originally proposed would expand the OMF at South Lake Union to have more storage for streetcars as well as additional space for staff, spare parts and equipment. It would also add a third maintenance bay two the two existing ones at that facility. But that design was done before the city selected the longer, heavier streetcars. From the engineering study:

The CAF vehicles are longer than the vehicles in the current fleet, and also differ in various industrial engineering requirements, such as the equipment and methods required for lifting the vehicles with jacks, and the configuration of the maintenance pit required for access to under-mounted equipment (axles on the CAF vehicles are configured differently from those on the Inekon vehicles, requiring a wider pit for side access to the wheels and powered axles).

The incremental cost to make the expanded OMF work with the new streetcars is estimated in the range of $5.6 to $5.8 million. 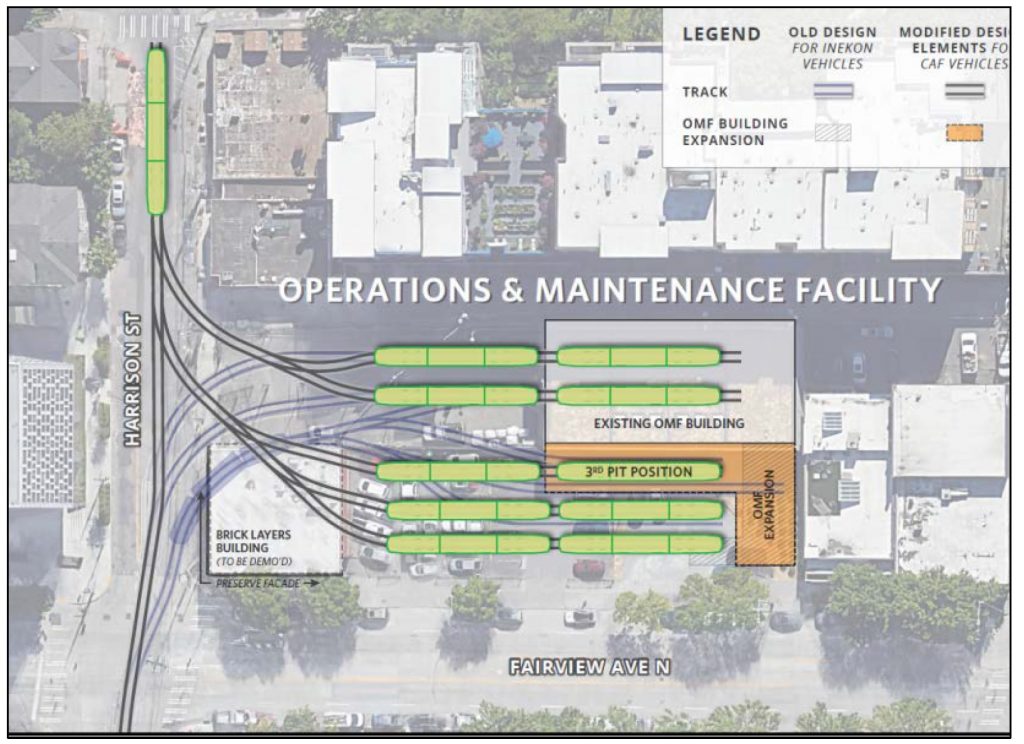 Bridges. Jackson Street between 2nd Avenue and 5th Avenue actually moves across five separate bridges; three of them date back to 1910, and the youngest one is from 1987. The First Hill line already runs along this segment, and a study of whether the bridges could support the streetcars (in addition to other vehicle traffic) was done at that time. But longer, heavier streetcars require revisiting that study. The new study did a preliminary analysis and identified several individual structural elements that would need to be strengthened or replaced, at a total cost in the range of $4.4 to $10.3 million. 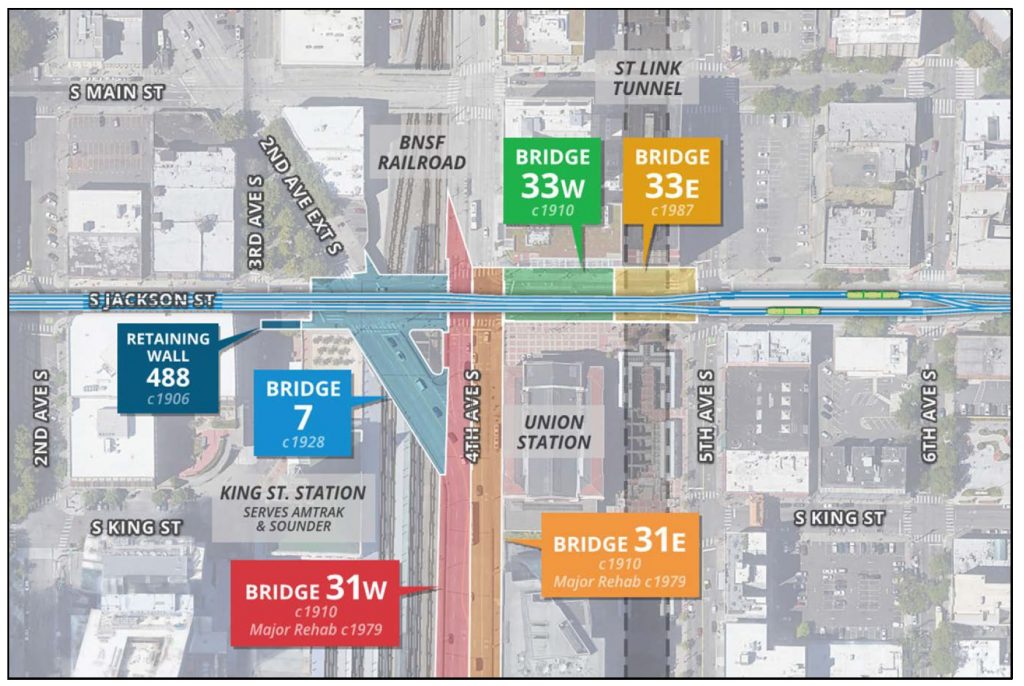 In total the engineering study’s proposed changes come at a cost of between $11 million and $17.4 million. 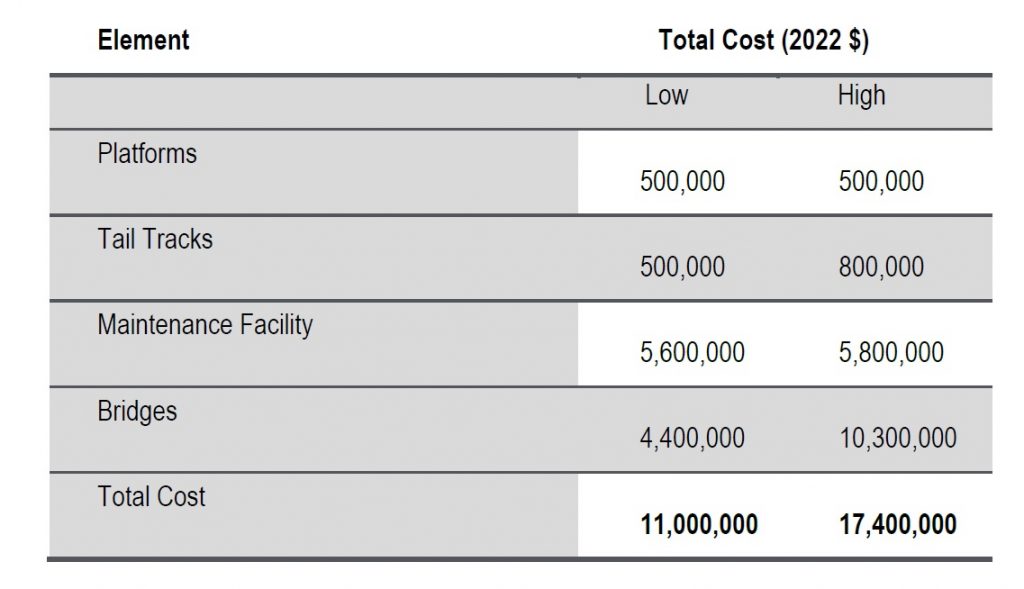 With those figures in hand, the city updated the overall capital cost estimate for the project. They also incorporated the “escalation costs” associated with rising construction costs because of the delay in the project. We also need to keep in mind that this isn’t just an SDOT project; both Seattle Public Utilities and Seattle City Light will be doing utility replacement and upgrade work simultaneously since the roads will already be dug up.

The original estimate for the project in 2015 was $143.2 million. By 2017, that had risen to $197.7 million. Last August, KPMG’s preliminary assessment (not factoring in the engineering rework) pegged the cost at $252.2 million. Now, with a high-end estimate of $17.4 million in additional engineering costs and $16.2 million in escalation costs across SDOT, SPU and SCL, the total estimate stands at $285.8 million. 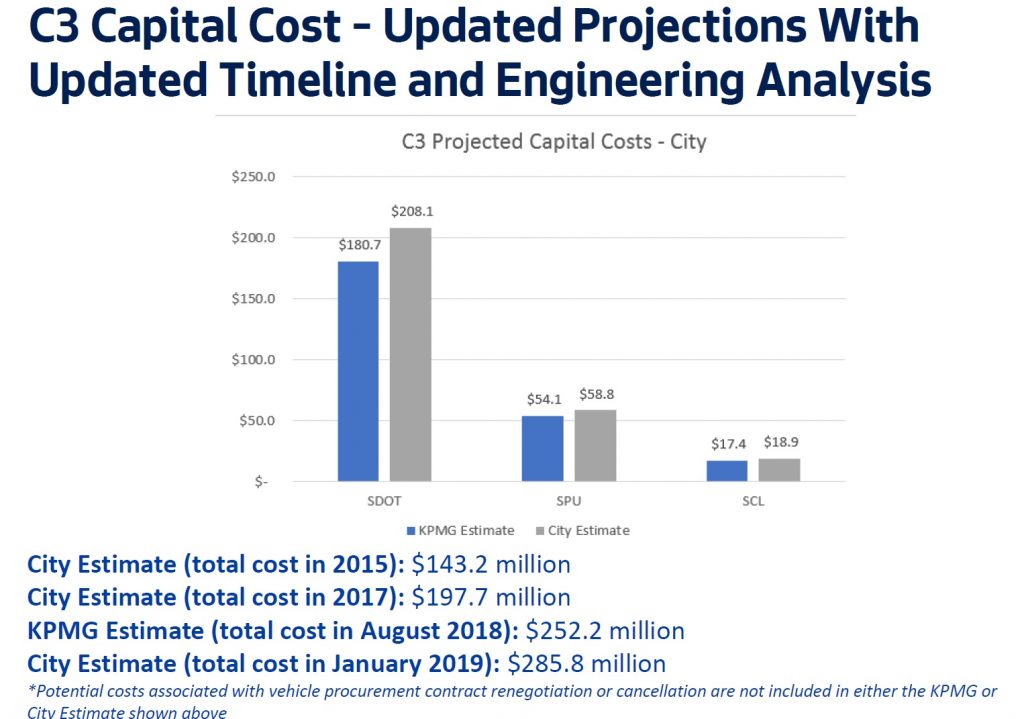 That breaks out to $208.1 million for SDOT, $58.8 million for SPU, and $18.9 for SCL. And it might go higher, because it doesn’t include any costs associated with renegotiating or cancelling the city’s vehicle procurement contract, if required.

And then there’s the annual operating and maintenance costs. You may recall when the Seattle Times revealed that SDOT and Metro were having a dispute over the projected costs: SDOT said it was around $16 million, while Metro’s figure was $24 million. Last August, the KPMG preliminary report said that after a cursory look it thought SDOT’s lower figure wasn’t unreasonable. However, since then SDOT and Metro have reconciled their figures and come up with new estimates, assuming 2025 is the first year of operation:

Even factoring in some cost escalation because of the project delays, that’s a lot closer to Metro’s number than SDOT’s (if not higher).

Assuming the current subsidies from Metro and Sound Transit are not renewed at the end of their agreed-to period (Metro in 2019 and Sound Transit in 2023), by the city’s calculation, the city may need to subsidize the operations and maintenance by $18 million in its first year, with the subsidy increasing in future years. Now it’s worth pointing out that nearly all public transit is publicly subsidized, so that itself isn’t a deal-breaker; but there is more work to be done and policy discussions to be held to come to consensus on what an acceptable level of subsidy should be.

Despite the rising capital and operational costs, Durkan has signaled that she now wants to move forward with the Center City Connector streetcar project. That will require a difficult conversation with the City Council on where to find $88 million in capital funds and $18+ million for operational subsidies (the city’s subsidy of the existing two lines this year totals $4.17 million). And undoubtedly the question will be asked whether those funds would be better spent on building affordable housing, given the failure of the “head tax” last year and the lack of significant new funds in this year’s city budget for housing.

Understanding the true costs for building and operating the Center City Connector, Mayor Durkan will work with community members, members of the City Council, transit partners, businesses, and stakeholders to move forward on this significant mobility project and identify resources to close the capital shortfall.

The Mayor now is hoping to have construction start in 2022, to make an opening date of 2025 and full revenue service in 2026. Whether the city can make that deadline depends on if the FTA grant comes through (the FTA has already told the city it intends to re-review the project before committing to fund it), and if the city can cover the rest of the $88 million shortfall. 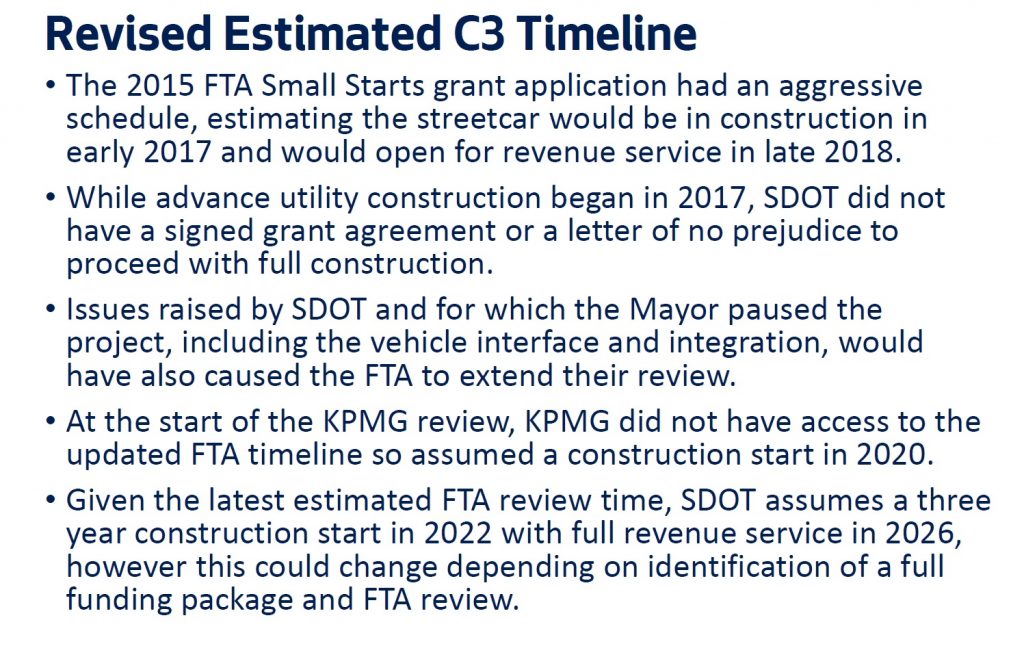 In this year’s budget, the Council carried over streetcar project funds from last year, though it conditioned the release of those funds upon its approval of a construction plan. Expect a briefing on today’s report and updated cost calculations to Council member O’Brien’s Sustainability and Transportation Committee as a kickoff to getting the project moving forward again.