There are concerted efforts underway in both the Washington state legislature and the Seattle City Council to reform the tenant eviction process this year.

The impetus for much of this work is a September 2018 report entitled Losing Home, authored by the Seattle Women’s Commission and the Housing Justice Project arm of the King County Bar Association.

The report begins by analyzing the 1,218 eviction cases filed in Seattle in 2017, to understand what the causes and impacts are of evictions. Their analysis is lengthy and worth reading in full, but the most salient points include:

This is no surprise: from the report, here is a flowchart of the typical eviction process for non-payment of rent. A lot happens in three short weeks. 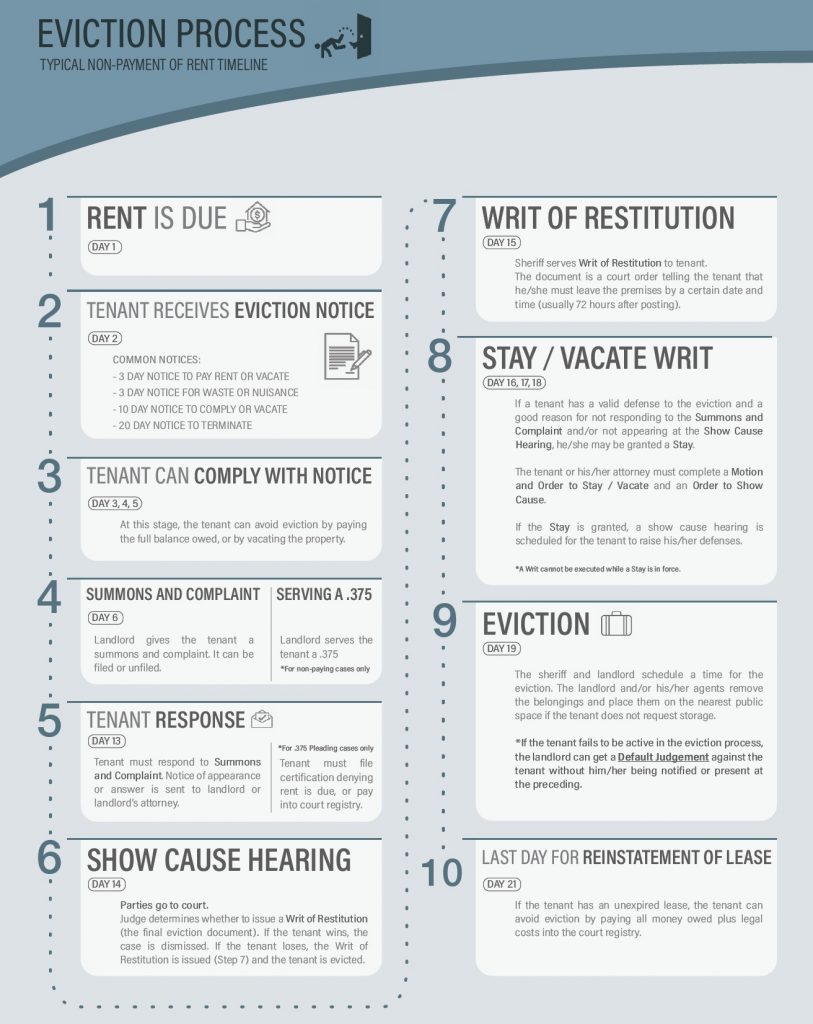 The report calls out one organization in particular for what appears to be a harsh approach to eviction: the Low Income Housing Institute (LIHI). It evicted dozens of tenants from its properties for relatively small amounts of money. 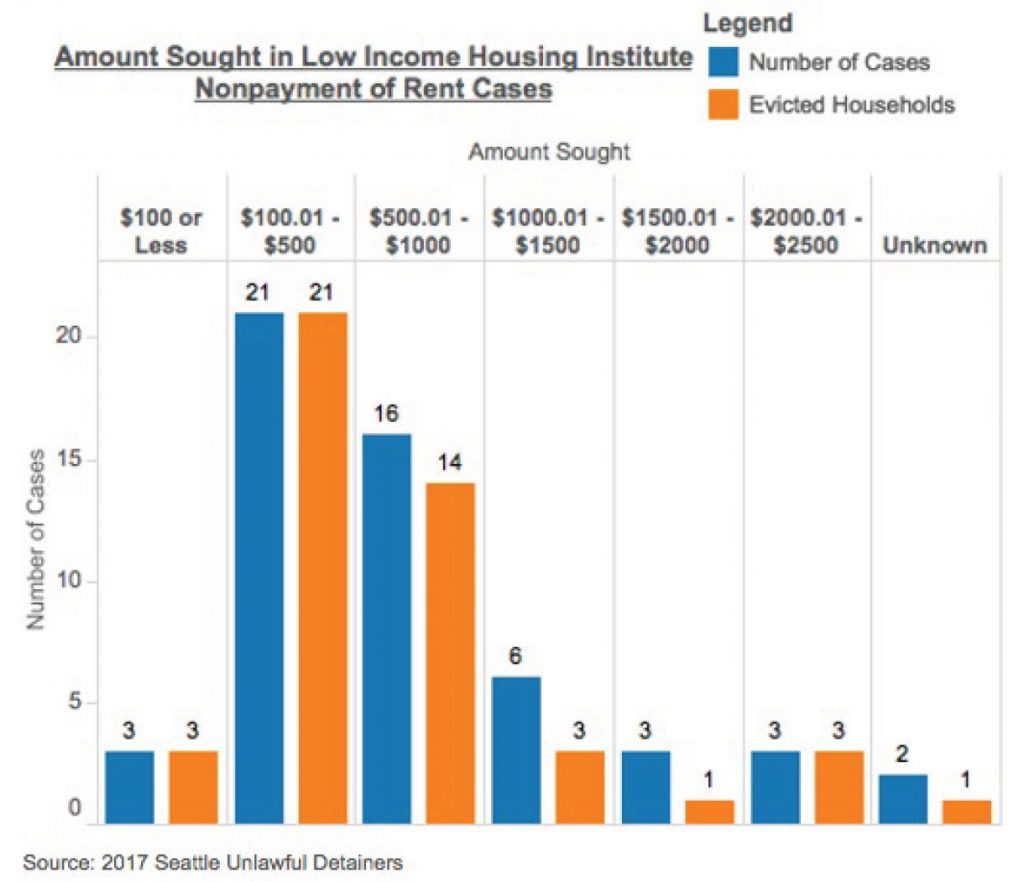 And in many cases it tacked on substantial additional charges, the most egregious case being $1,450 in attorneys’ fees and court costs for a $49 underpayment. 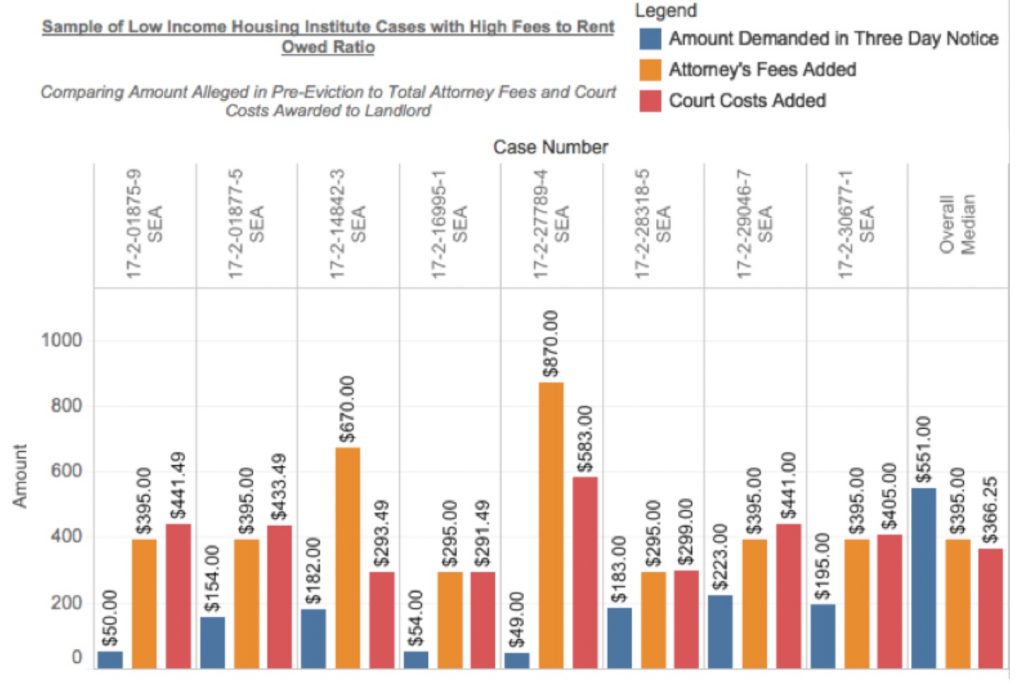 The report highlights several problems with the current eviction process from the perspective of tenants, and recommends solutions — many of which require legislative action to reform current laws. Near the top of the list is that from the time a tenant receives an official notice that he or she is behind on rent, there is only a three-day window in which the landlord is required to accept payment, after which the landlord may choose to evict the tenant even if he or is able to pay. That’s not enough time to wait for the next paycheck, and despite the fact that programs assist to help tenants financially who are in danger of eviction due to nonpayment of rent, three days is often not enough time for tenants to discover and contact those programs and get the assistance in-hand to pay their rent in full.

The report offers eighteen recommendations for specific actions to be taken to reform the eviction laws, process, and tenant assistance programs: 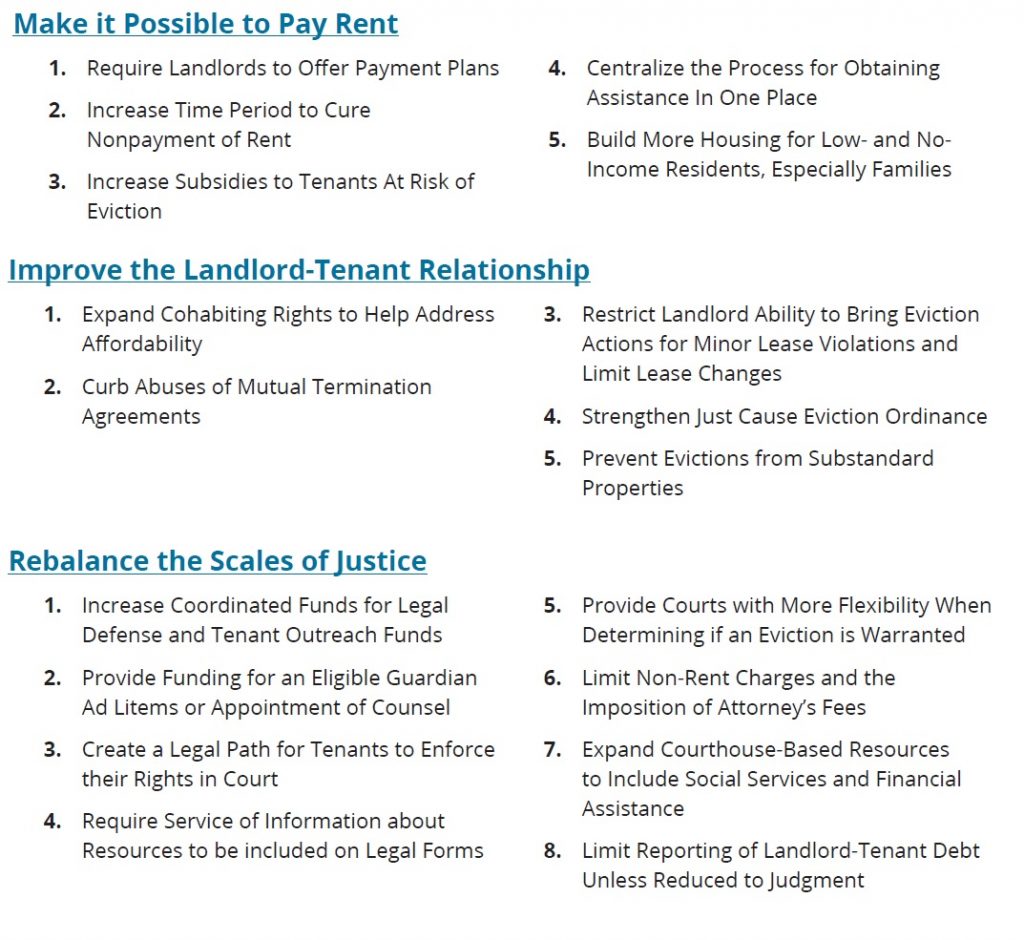 State representative Nicole Macri (with a number of co-sponsors) has introduced two bills during the current session to address some of these issues. House Bill 1656 attempts to repeal “no-cause eviction.” It does the following:

House Bill 1453 more directly addresses reforms to the eviction process itself. It does the following:

For its part, the City Council seems to hope that Macri’s bills make it through the state legislature. But Council members Lisa Herbold and Mike O’Brien have brought forward their own resolution to establish an agenda for local reforms to the eviction process. That resolution passed through Herbold’s committee two weeks ago, and is up for final approval by the full Council tomorrow (Monday) afternoon. Rather than identify specific solutions, the resolution lays out several problems for the Council to tackle this year, and a couple more that form a longer-term agenda.

The issues on the resolution’s list for this year:

While there are many important issues to be addressed on the list and many landlord abuses to be curbed (such as excessive charges tacked on to evictions), these are also very one-sided lists that paint all landlords with the same broad brush — and assume to some extent that landlords don’t have cash-flow issues as severe as some tenants. It also continues a local trend in denying landlords the right to choose tenants (by denying them the ability to end a tenancy with a problematic tenant who might violate the spirit but not the letter of a lease agreement or who is chronically late in paying rent but never quite meets the threshold for eviction). But landlords’ rights to choose their tenants is a matter being litigated in Washington courts at the moment — and at least for the moment, the landlords are winning. That might pose a problem down the road for Macri’s bill prohibiting no-cause evictions if worded too broadly.

As expected, the Rental Housing Association of Washington, a trade-association and advocacy group for landlords, has come out strongly against the City Council’s resolution setting out its eviction reform legislation. In a statement emailed to me,  Heather Pierce, the RHA’s Deputy Director of Government Affairs, wrote:

The simple, effective solution to reducing evictions for non-payment of rent is to provide short-term, emergency rent assistance for those in need and with limited resources. RHAWA advocated that Council greatly increase this funding during its budget discussions and was roundly ignored.

Short-term rental assistance works. Seattle’s own Housing Levy Report from March 2018 notes a 97% success rate at preventing eviction and homelessness. RHAWA publically supported passage of the Seattle Housing Levy in 2016 and the renewal of Bellingham’s Housing Levy in 2018 for this very reason.

SCC has chosen to put zero additional dollars toward short-term rental assistance in 2019, with Councilmember Herbold instead wanting to study its efficacy – in the face of the City’s own Housing Levy Report demonstrating that short-term assistance works and preempts the eviction process all together.

Interestingly, Greystone Company analyzed rental subsidies given out by cities around the country and Seattle ranked among the lowest when it comes to providing residents relief for financial emergencies that would otherwise keep them housed.

Landlords are not the cause of eviction. Income inequality, and systemic economic and institutional social barriers are the drivers of the collective action problem before us. Council can best serve the City by engaging with stakeholders on all sides. Developing the best available data as a basis for policy discussions would create cogent economic outcomes for tenants while preserving Seattle’s indispensable rental housing stock.

Clearly both sides are staking out positions on the ends of the spectrum. 2019 looks to be the year for eviction reform (or at least attempts), but don’t be surprised if it drags out in the courts into 2020 and beyond. In the meantime, House Bill 1453 is scheduled for a hearing in Olympia Tuesday morning, and House Bill 1656 is scheduled for its first hearing Wednesday morning.