Today the Seattle City Auditor released its review of aspects of the city’s homeless response related to early outreach, hygiene services, and rigorous evaluation. The report was critical of the city’s execution on all three issues.

Some context: During the 2017 budget process, the City Council required the executive branch to file a series of quarterly reports over the course of 2018 on the homeless response and particularly on the Navigation Team. The City Auditor worked with the executive branch on the reporting plan, and has been reviewing those quarterly reports after they are published.  In August 2018, the second quarterly installment was published, which looked at five of the required “reporting checkpoints” in the reporting plan. Today’s report from the City Auditor reviews four of those elements:

While the titles of the reports emphasize the Navigation Team, the review is much broader, taking a look at HSD’s approach to these areas beyond simply what the Navigation Team does itself. And it finds the response lacking. Let’s take this one area at a time.

The auditor faults the city for not having a systematic, coordinated approach to outreach to those who have just become homeless (and as such are much easier to divert out of the homelessness system and back into permanent housing). The city’s own outreach staff is spread across three different city departments: 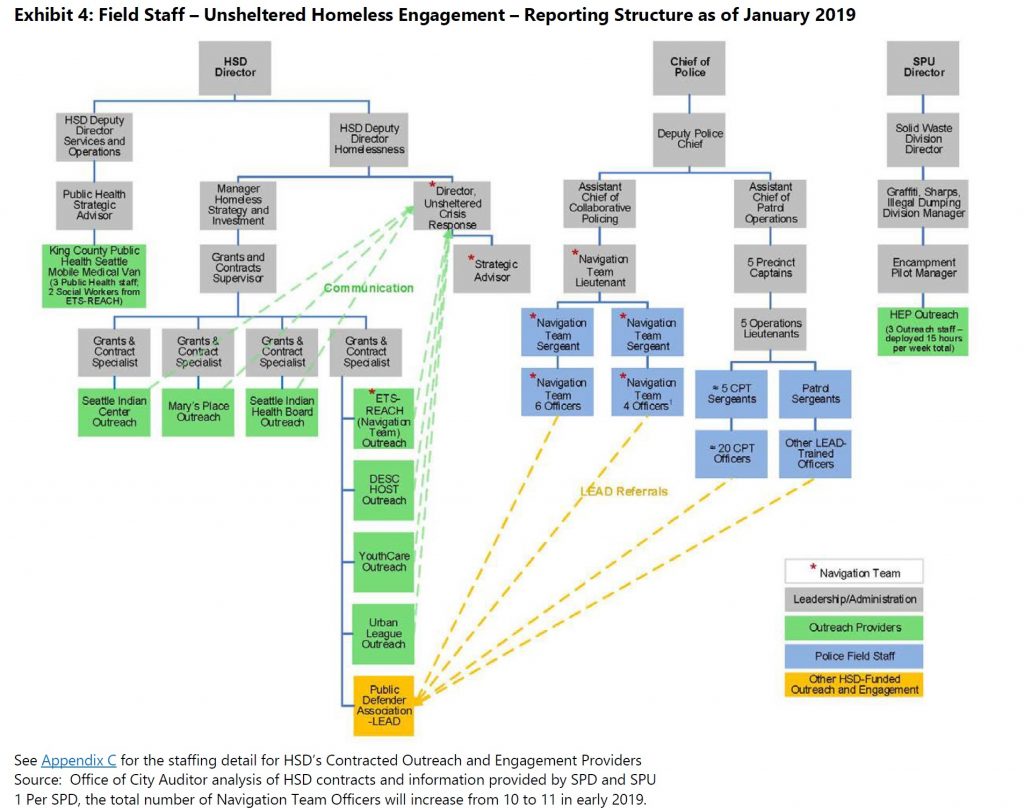 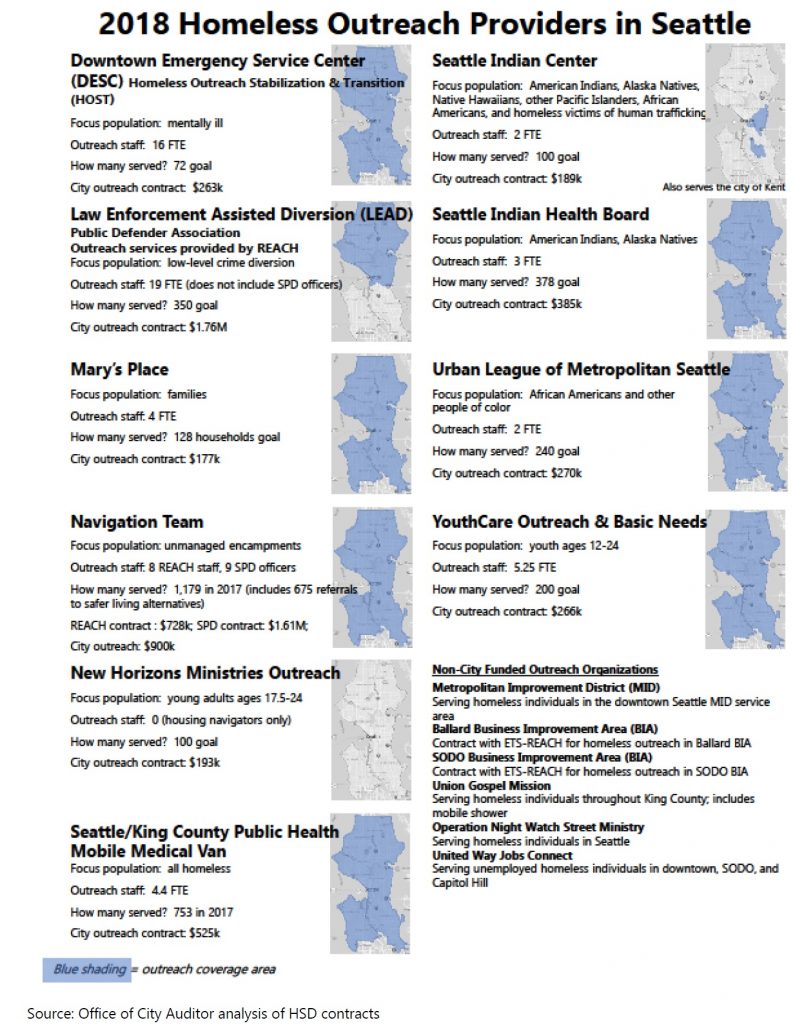 If you think this might be a mess… you’re right. To quote the Auditor’s report:

The City does not currently use a robust systematic approach for managing homeless outreach field operations, which involve nine nonprofit organizations, multiple City agencies, and King County. Without such an approach, the City cannot ensure outreach work is well-coordinated and effective. We encourage the City to consider reinstating some of the strategic coordination components from the Federal Emergency Management Agency’s (FEMA, Incident Command System (ICS)).

In the early days of the Navigation Team, this is exactly what the city did: it deactivated its Emergency Operations Center (which uses FEMA’s ICS) and brought all the stakeholders together every morning to coordinate activities. But in late 2017, it closed the nine “missions” associated with the EOC activation, and decentralized control over the homeless response. 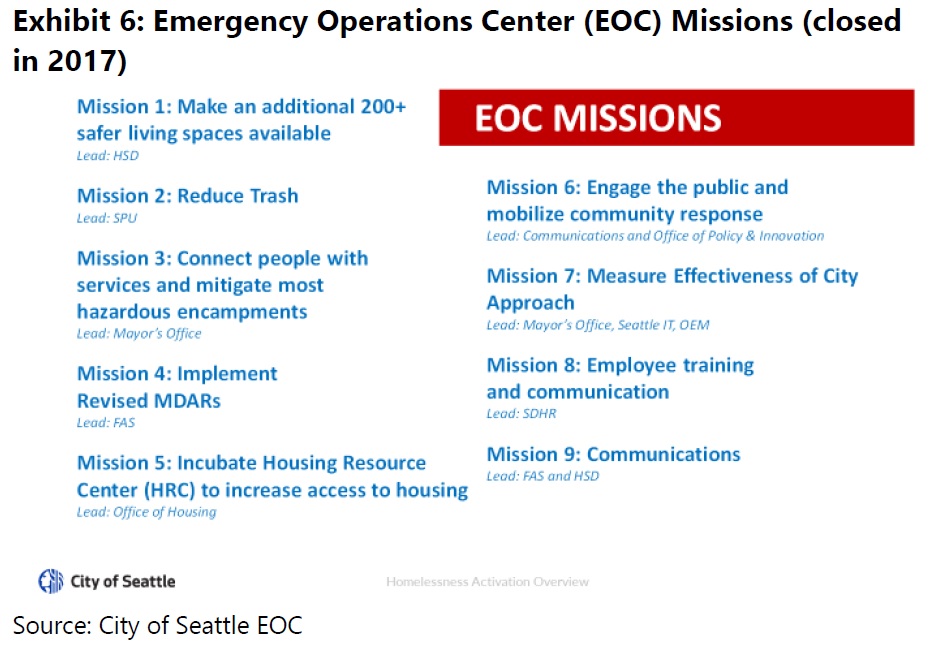 One of the results of this lack of central coordination ties directly back to the question at hand: Seattle has no coordinated mechanism for receiving reports of newly-unsheltered people, and also no coordinated mechanism for dispatching outreach workers (their own staff and/or third-party service providers) to offer services to them. The auditor’s report cites the examples of London and New York City that have existing programs to do exactly this.

It’s actually worse than it sounds. Here’s the auditor’s  report on the way the city receives reports:

The city acknowledged in its Q2 report that outreach to the newly-unsheltered is a “gap,” but that’s a far cry from the systemic problems that the auditor found.   The auditor also notes that late last year the amazing local organization Mary’s Place, one of the organizations under contract with the city, has set up its own outreach portal and dispatches outreach teams to families that contact it directly. This isn’t the first time that Mary’s Place has stopped waiting for the city to get its act together; it launched its own housing resource center rather than continue to wait for the “landlord liaison” program to reinvent itself into something useful.

The auditor provided a set of recommendations for the city to consider: 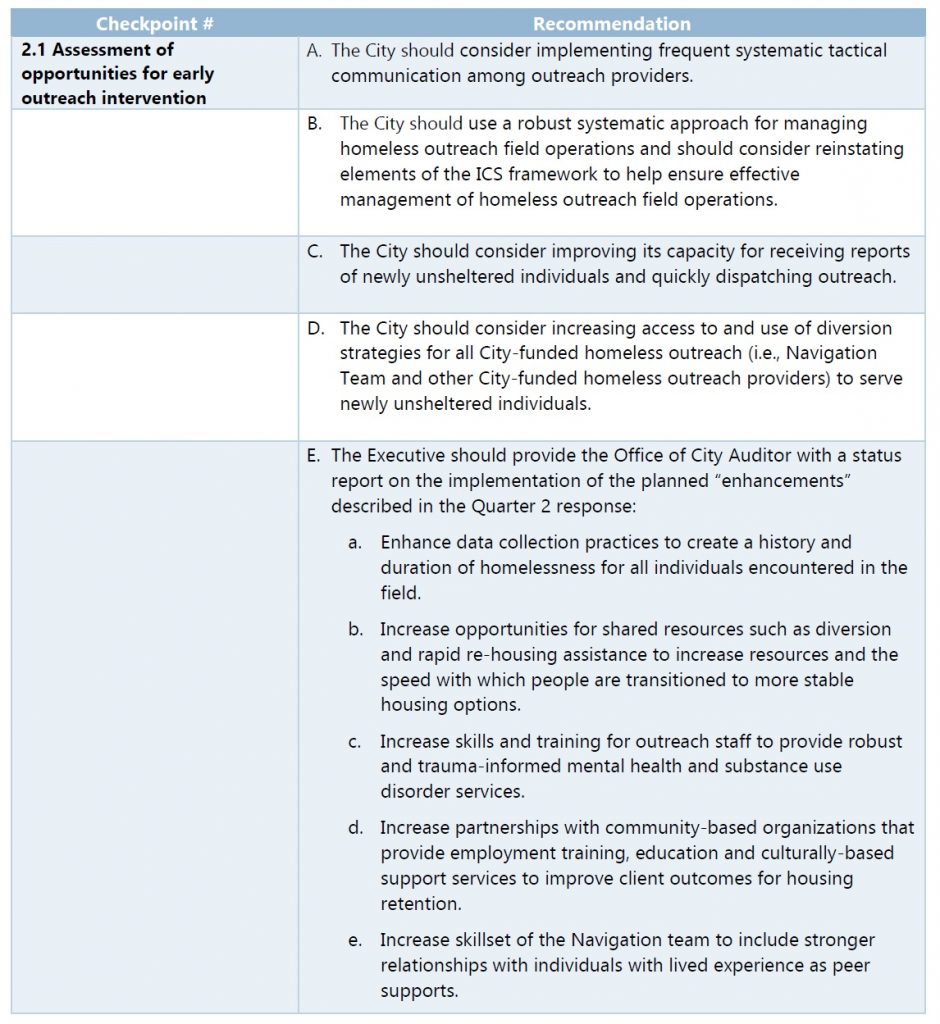 The 2017 outbreak of Hepatitis A in San Diego’s homeless population brought national attention to the importance of hygiene services for the homeless, including access to toilets and showers, to address the public health risks. HSD’s Q2 report (see appendix A) included a long list of city-funded sites where some level of hygiene services are providers, including shelters, day center, parks and community centers. But upon reviewing that list, the auditor discovered that only six of the city-funded facilities that provide restroom access are open at night.

The auditor’s report does some quick math on this situation. The 2018 Point in Time count found 4,488 people living unsheltered in Seattle (not including the people sleeping in emergency shelters). The UN High Commissioner for Refugees, who sets standards for the operation of long-term refugee camps, states that there should be at least one toilet for every twenty persons. By that standard, Seattle needs 224 toilets, spread around the city, to serve its homeless population. We have six.

And it turns out that four of those six are in sorry shape. The two maintained by the Parks Department in Green Lake Park are ok, other than that they are both missing sharps-disposal containers. But the other four, which are portable toilets funded by HSD, were disasters when the auditors checked them out:

The two comfort stations at Green Lake Park had lights, running water, flushing toilets, and were clean and well-maintained. In contrast, the four portable toilets provided by HSD were poorly-lit and had no running water. Three of the four were damaged in a way that adversely affected their usability (e.g., no toilet seat, no sanitizer dispenser, broken ADA rail). The cleaning log for the portable toilet at the Lake City Mini Park indicated that the unit had not been cleaned for ten days. We observed syringe parts in two of the toilets, and none of the six locations had sharps containers. 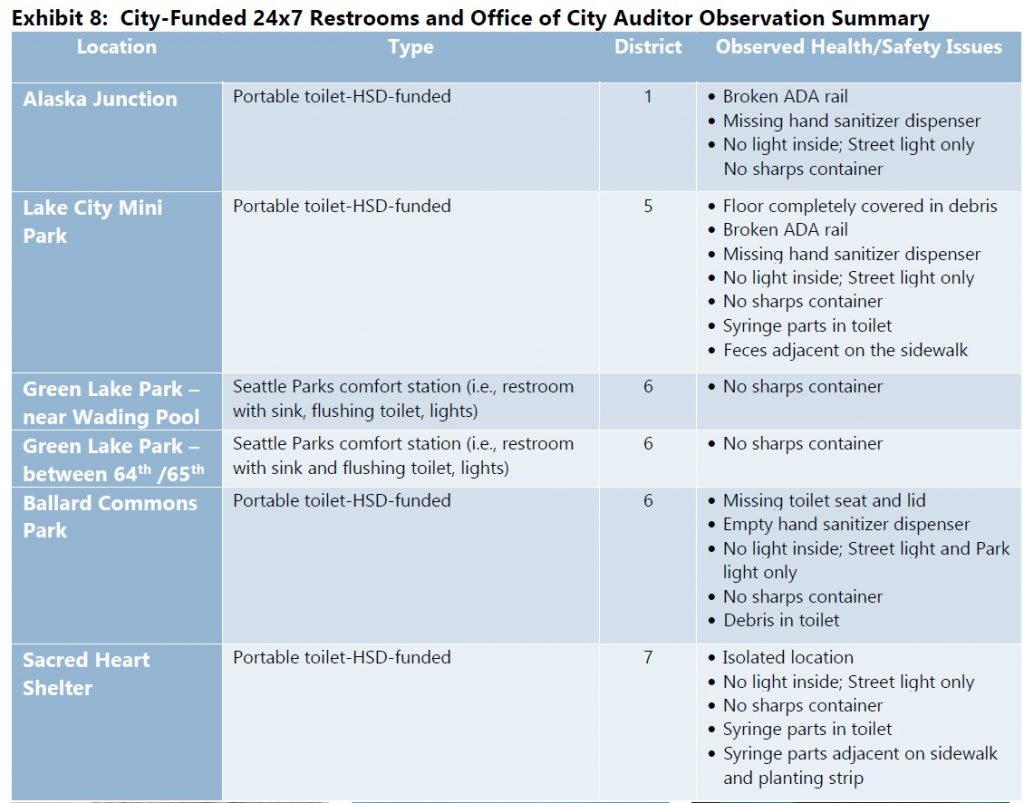 The auditor also found problems with the shower services being offered to the unsheltered: gaps in geographic coverage,  problematic hours of operation, inconsistency in messaging, signage, ancillary services (e.g. towels),  and standard of care. Also, none of the sites were being leveraged for outreach activities to the unsheltered.

The geographic coverage varies substantially, with no shower facilities at all in District 5. 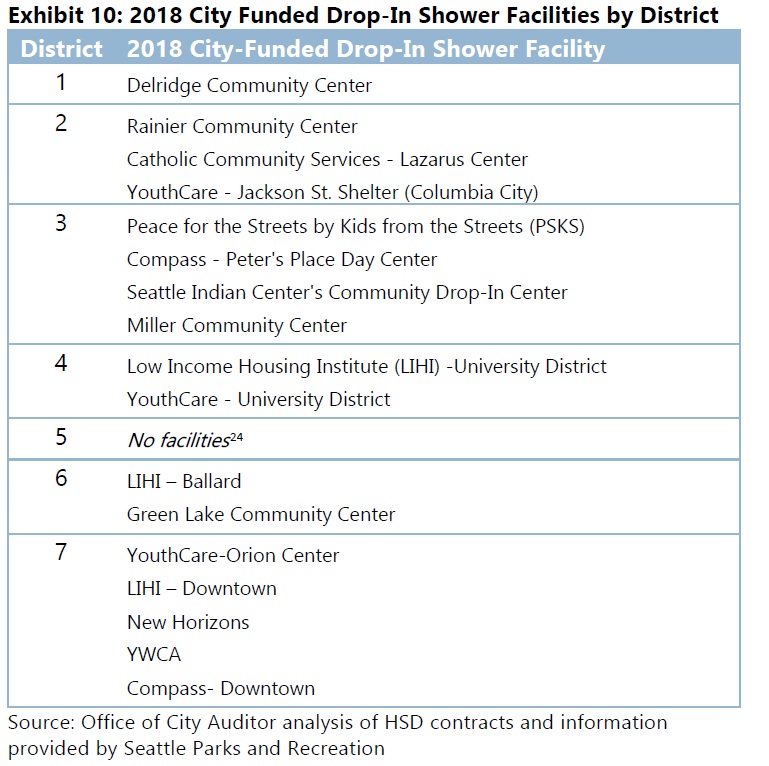 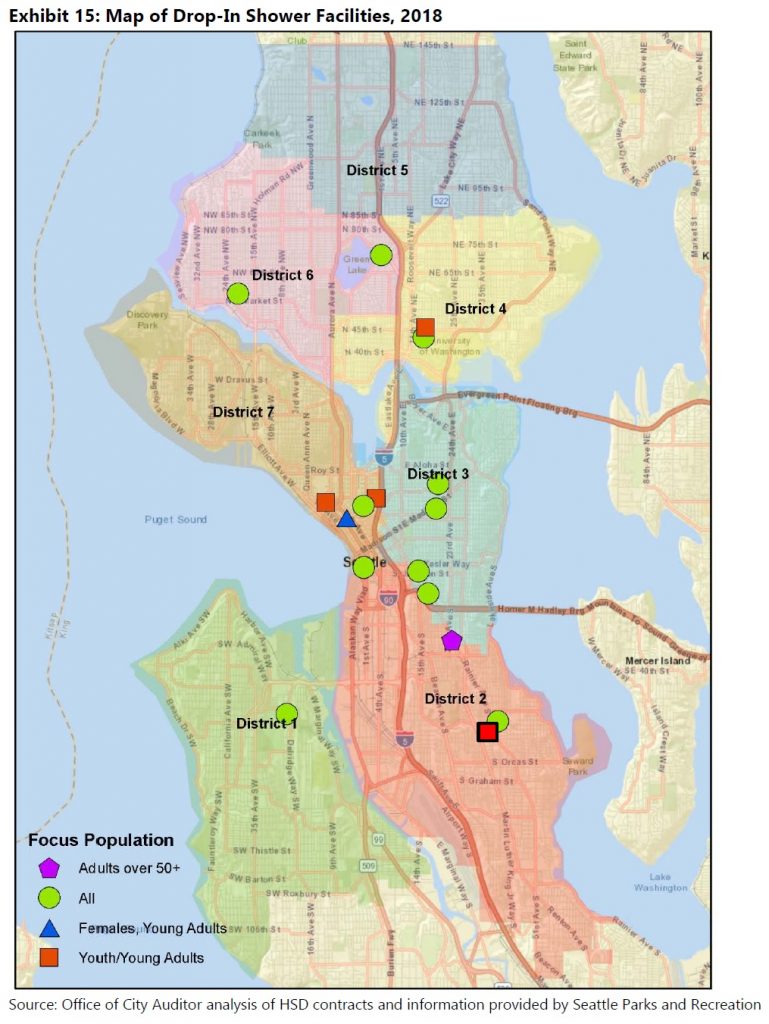 Provisioning of hygiene services has been a subject of debate between HSD and the City Council. The Council has pushed for making more standalone hygiene services available, while HSD has instead tried to expand availability by transitioning existing basic emergency shelter facilities into “enhanced shelters” that would include hygiene services. But as the auditor points out, while expanding enhanced shelters is good up to a point and definitely something that the city should to, it isn’t scaling up to meet even close to the need of the unsheltered population.

The auditor provided a set of recommendations for the city on improving hygiene services: 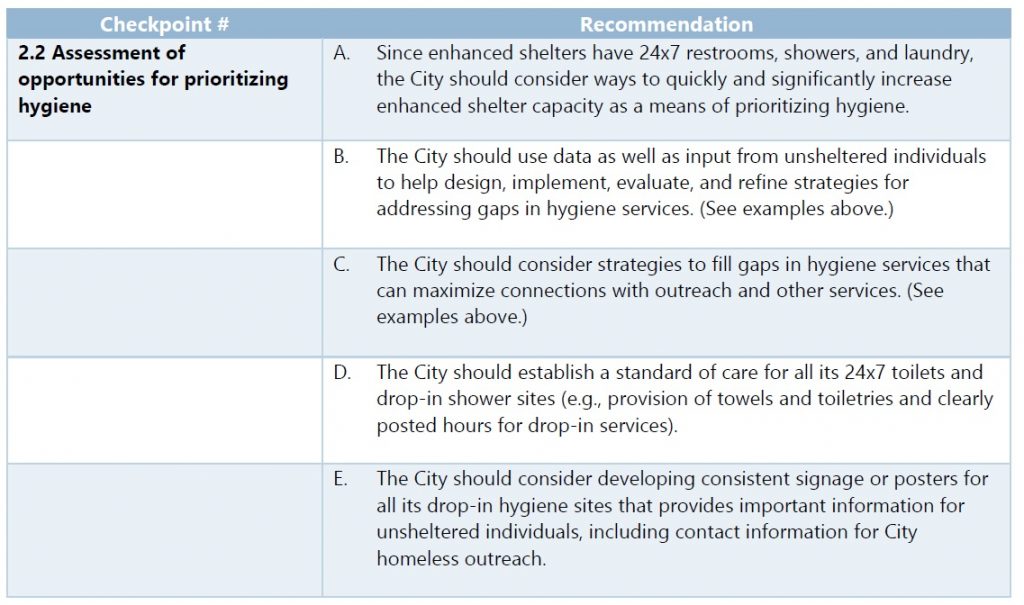 Among its recommendations in the report is looking more closely at deploying “Mobile Pit Stops” as San Francisco has done.

Finally, the auditor looked at whether HSD was developing a rigorous plan to evaluate the Navigation Team and it larger homeless response — preferably one done by an independent third party — and to involve homeless people in that evaluation.

HSD’s Q2 report stated that the city was laying out some of the underlying requirements for formal evaluation, such as revising its Theory of Change, and improving its baseline data collection starting in January 2019.  But it stopped short of committing to a formal independent evaluation, citing concerns about the expense. In response, the auditor provided a list of ways the city could possibly get a low-cost or no-cost rigorous evaluation — though quite frankly, given the amount of money being poured into the homeless response, the cost of evaluation ought to be pretty low on the list of concerns.

The city also stayed vague when discussing the role of its clients, people experiencing homelessness, in evaluating its programs:

There are multiple ways HSD is making strategic plans to include the voices of those who have experienced or are currently experiencing homelessness in program planning and evaluations. This plan includes the ability to do outreach and engagement with the unsheltered population for, not only the Navigation Team work but also the broader homeless system, programming and evaluation.  Currently HSD is working with a contracted trainer to learn how to use techniques such as focus groups, surveys, and key informant interviews to use in supporting programming and evaluation. A focus in using these skills to engage with the unsheltered population with conversations about homelessness systems include the  Navigation Team work and learnings can be directly applicable.

Here is the auditor’s recommendation for the city to improve its evaluation process (or indeed to have one at all):

Crosscut recently reported on a local poll showing that voters are unhappy with their city leaders for their lack of progress on issues such as addressing homelessness — and they often don’t believe that lack of funding is the problem. Today’s report from the City Auditor will certainly bolster that view, for better or worse, providing substantial evidence that the city is not executing well on the substantial resources it currently has to address homelessness. And there is plenty of blame to spread around: former Mayor Ed Murray and former HSD Director Catherine Lester, who established the Navigation Team but left accountability and evaluation as an afterthought; current Mayor Jenny Durkan, now 14 months into her tenure, who has failed to make meaningful changes that would address the failures the City Auditor points to; and interim HSD Director Jason Johnson, who previously served as Deputy Director under Lester and had as much of a role in creating the current system, flaws and all, as any of the other city leaders. Johnson is now Durkan’s nomination for permanent HSD Director, though it’s unclear why he would want the job at this point given the attacks that Council member Sawant, some HSD employees, and representatives of some human-service providers under contract with the city have hurled at him since he was nominated by Durkan. On the flip side, the auditor’s report equally raises valid questions as to whether Johnson should have the job in the first place.

When asked for comment on today’s report, a spokesperson for the Mayor’s Office issued a nearly information-free, stick-your-head-in-the-sand statement:

“Addressing our homelessness crisis is the greatest challenge facing our City, and our Navigation Team is critical to offering shelter and access to services to some of our City’s most vulnerable residents, and in some of the most difficult circumstances. Last year, the Mayor expanded the Navigation Team to bring more people off the streets and into safer places. The City will continue its work across outreach teams to get people the help they need, to provide them access to services, and to help them move into safer places.”

The City Council has some responsibility for this debacle as well. On one hand, it’s to be credited (led by Council member Herbold) for requiring HSD to write the quarterly reports and for requesting the City Auditor to fact-check them. On the other hand, the Council (led by Council member Sawant) has repeatedly undermined accountability measures by inserting into the budget funding for specific providers (most notably SHARE/WHEEL) that they have a close relationship with, after HSD rejected their bids because of poor performance. Granted, the Council re-inserted funding for hygiene services after HSD shifted it over to enhanced shelters; however, the Council directed it toward daytime and evening hygiene services, mostly downtown — not overnight, and not in the underserved parts of the city.

Strangely enough, the auditor’s report doesn’t provide much guidance in answering one question that is top-of-mind for many: whether the Navigation Team itself is living up to its billing. Perhaps one day, when many of the conflated issues have been resolved, we’ll get some clarity on that question.