Two weeks ago the Council walked through all of its proposed amendments to the city-wide MHA ordinance; I wrote up the results here. Tomorrow afternoon, they are scheduled to vote on those amendments, vote it out of committee, and then give final approval to the ordinance on March 18th..

The Council will also start discussing a draft companion resolution to accompany the MHA bill that commits the Council to several other actions.

Here’s a preview of how things are shaking out, and the awkward conversations the Council members will need to have tomorrow as they vote on amendments.

The set of amendments are broken up into two sections: those that change development standards that apply across the city, and those that modify the zoning map itself as it applies to specific lots in the city. For each of those two sections, the Council has further divided them into uncontroversial ones that can be adopted in one fell swoop as part of a “consensus package” and those that need individual discussions and votes. The vast majority of the amendments to development standards are in the consensus package; in fact, only two will be handled separately:

The zoning map changes are more evenly split, though in general the amendments that increase “upzoning” are in the consensus package, and (with a few notable exceptions) those that reduce upzoning will require separate votes. That reflects the conversations the Council members had at their last meeting: there was vocal resistance from some Council members to attempts to reduce upzones, while other Council members tried to make the case for one-off reductions in their districts.

In response to requests at the last meeting, the Council’s central staff researchers and prepared a memo addressing two questions: what the cumulative impact to the MHA program would be if all the amendments — including the reductions — were adopted, and how significant it would be if the Council adopted an amendment to require small street-level commercial spaces in pedestrian zones.

On the first question, what the Council ideally wanted was a way to quantify the impact of individual amendments so they could potentially vote for them “a la carte.” Unfortunately, the city’s modeling doesn’t work that way: the MHA model distributes growth around the city based upon past growth and development patterns, and statistically predicts how much redevelopment will happen over an area rather than trying to make predictions about what will happen with individual lots. That means that if development capacity is reduced on one lot, a nearby one may have a higher chance of being redeveloped rather than simply reducing the overall amount of development that happens. So it’s a big statistical model with intertwined components, rather than a sum of a collection of individual calculations. When the Council staff plugged in all the amendments under consideration and re-ran the model, it came up with a net decrease in MHA units produced of 56 out of the nearly 3,000 originally expected to be produced — about a 2% decrease for the city-wide MHA legislation, and 1% of the entire MHA program. 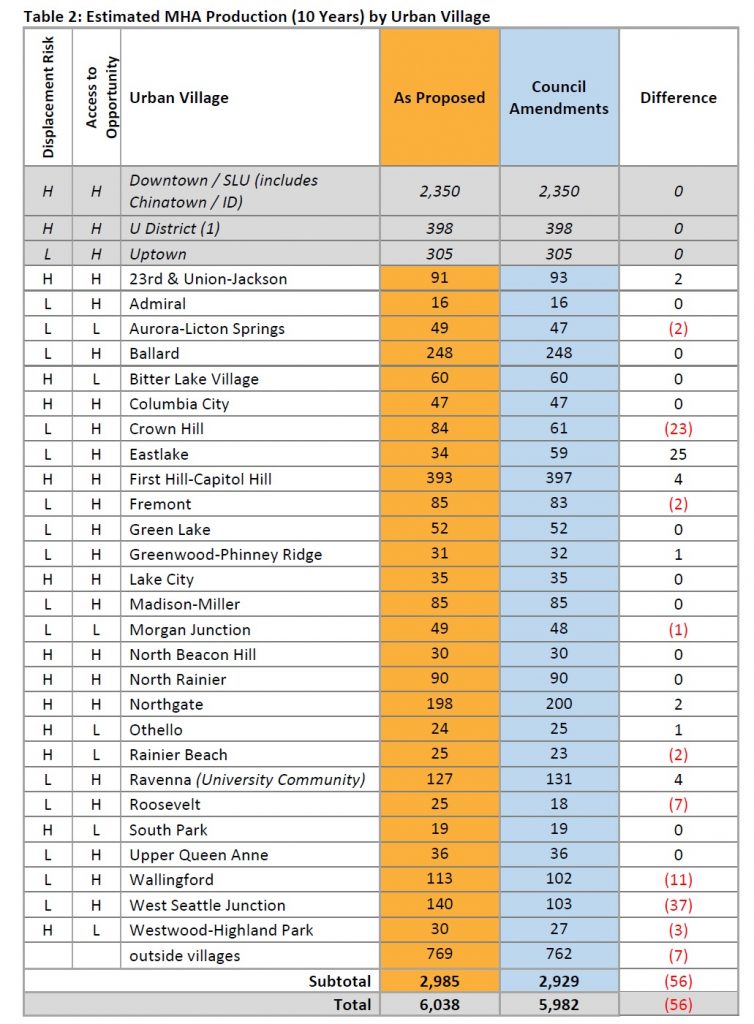 However, this analysis doesn’t capture how much development capacity is being added or removed from each of the urban villages — though that also can’t be calculated on a site-by-site basis without assuming that development will always max out the allowed capacity (it doesn’t).

As for the commercial space in pedestrian zones, they found a few interesting things:

Thus there are tradeoffs: commercial space is currently limited, but much of what exists can be configured for small shops as necessary. It could be useful today to require commercial developments in pedestrian zones to include small commercial spaces, but doing so might limit flexibility in the future as retail and other commercial real estate needs change.

For fun, here’s a map of the existing pedestrian zones in the city. 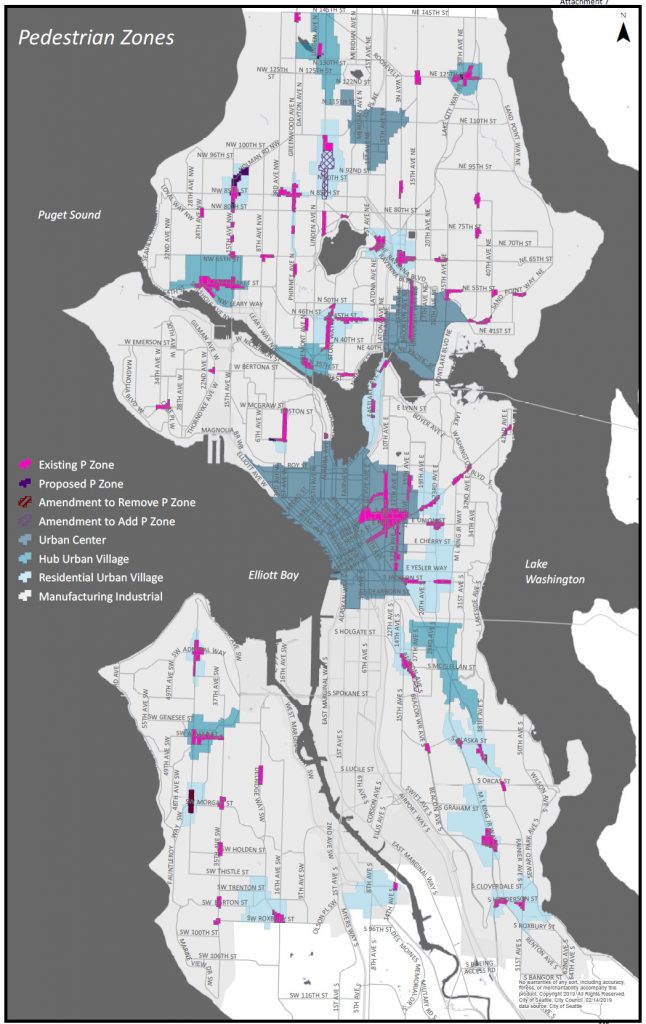 The companion resolution has a section for city-wide issues, and sections for each of the seven Council districts (with the exception of District 3, which has no section). Among the commitments the Council makes citywide:

And that leaves the issues surrounding the potential reductions in upzones for specific areas that have been proposed by Council members Herbold, Harrell, Johnson and O’Brien at the request of their constituents. All of those will be awkward conversations, circling around the question of when a slower path to growth is appropriate.

For Herbold’s proposal for West Seattle Junction, the issue isn’t whether to accept higher density; it’s whether to wait six months until after Sound Transit picks the preferred location for the new light rail station there, so that the right lots surrounding it are fully upzoned. But at the last meeting, Herbold’s colleagues didn’t seem to fully trust that another upzone would happen in six months, and seemed to prefer moving forward now at the risk of upzoning the wrong location. Herbold could potentially add a section to the companion resolution committing to upzoning West Seattle Junction by July of this year (the light rail station location is expected to be finalized in May).

And finally there’s Crown Hill. This is a particularly tough one, where the neighborhood negotiated with the city and Council member O’Brien on a  different plan in which the center of the urban village was upzoned more and the peripheral areas were upzoned less, with an expectation that it would approximately even out (though the Council central staff’s analysis in the above table suggests they missed the mark). What’s particularly troublesome, though, is that the Council has taken that “package deal” and split it apart, putting the increased upzone of the center area in its consensus package, and left the decreases around the edges as individual items — suggesting that they intend to say “yes” to the increase and “no” to the decreases. If they do that, the Crown Hill neighborhood has every right to be furious and to declare that the city (and O’Brien) negotiated in bad faith; the Council would in effect be punishing Crown Hill for trying to negotiate with the city at all. That said, the Council has every right to not accept the deal and revert back to the original proposal in the MHA legislation. But it would be wrong for them to just take the part they like and dump the part they don’t; that would likely be the last time any neighborhood group ever tried to talk things through with the city to reach a compromise rather than heading directly to court. Hopefully tomorrow we’ll see O’Brien make clear to his colleagues that the Crown Hill amendments were negotiated as a package deal and they should either take all of it or none.

There are a handful of other small reductions in the proposed upzones, such as for Westwood-Highland Park, North Rainier, Roosevelt, and Wallingford, that face uphill battles tomorrow. Their best chance is if the Council collectively concludes, based on the staff memo, that the reduced upzones aren’t significant enough to argue over and lets them be small victories for the district-based Council members.

It’s also possible that the Council will postpone voting on some of these amendments until March 18th when it comes up in front of the full Council for final approval (assume it’s voted out of committee on Monday).

Prepare for a long meeting, because even with the consensus packages, there are a lot of amendments to get through. And there will definitely be some long speeches about the importance of increasing housing density, especially in the most desirable neighborhoods in the city.