Yesterday Mayor Durkan, Interim Human Services Director Jason Johnson, and other city officials briefed the press on the Human Services Department’s (and the city’s) response to the homelessness crisis in 2018, in advance of releasing selected statistics to the public. In addition, HSD delivered its quarterly report to the City Council this morning on the performance of the Navigation Team. This follows a report from the City Auditor’s office earlier this month criticizing HSD and the Navigation Team for aspects of its response.

First: HSD’s numbers come with several caveats, that make them less than fully dependable in some cases, and not always useful. HSD tracks “exits to permanent housing,” but it does it in a weird way. It tracks households instead of individuals, so it doesn’t have a tally of the number of individuals it served or that moved out of homelessness. Also, because a household often interacts with several of the city’s programs on their way through the homelessness system and in those cases the city has no way of attributing the “exit” to a single program, it credits an “exit” to all of the programs that interacted with that household. That means that there is duplication in the city’s numbers. So we don’t know how many people moved through the system, we don’t know how many actual “exits” happened, and we don’t necessarily know how to compare and contrast programs. Erica Barnett’s article last week debunking the city’s numbers on exits from homelessness is a worthwhile read on the topic.

What we do know, however, is that the city has been consistent for the last couple of years in how they have tallied “exits,” so within a particular program we can compare the 2017 and 2018 numbers and get a feel for whether the program is improving and generally successful.

HSD acknowledged all of these weaknesses in their data (though it didn’t stop them from touting them as successes). They also claimed that they continue to work on improving their data collection processes so they can do more insightful analysis. But for right now, the way they collect and report data is driven by federal funding requirements on a program-by-program basis; they must collect and report data in this way — though there is nothing stopping them from also collecting and reporting data in other ways. Mayor Durkan and HSD Director Johnson stated bluntly that the current data collection methods get in the way of the city’s ability to solve the problem because it doesn’t capture what they need to deliver services. Durkan also pointed out that King County measures utilization rates of services it provides (such as mental health treatment) instead of exits, so the city and county need to get on the same page.

The bottom line: it’s not worth trying to analyze many of the numbers the city has published. But let’s focus on learning what we can where there is meaningful data, and especially year-over-year comparisons. Also, to the extent that a program is the last step before exiting homelessness, the “exits” data probably has some validity — but for the front-end programs such as “outreach” it’s nearly meaningless. To be clear, that doesn’t mean that outreach is not making a meaningful impact; it just means we don’t have meaningful data to quantify that impact.

Let’s start with the most visible part of the response today: emergency shelters. That includes “basic” shelter, “enhanced” shelter, “tiny home villages,” and day/hygiene centers. Here are the numbers that HSD provided: 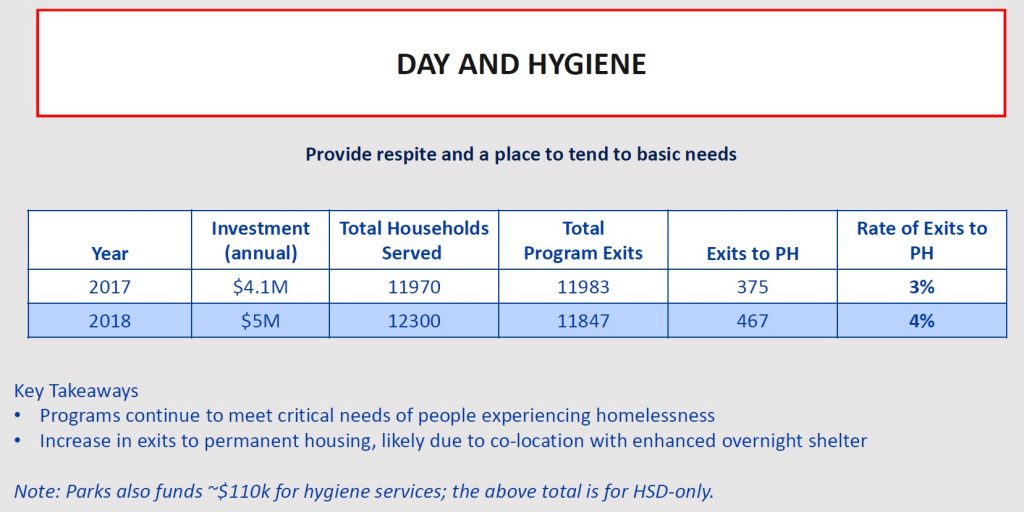 What we see from these numbers is continued reinforcement of past learnings: basic shelters are a minimal humanitarian response to people living outside, but they are almost completely ineffective in moving people out of homelessness. Enhanced shelters do much better (though still not great). The interesting new learning in the 2018 data is that the permitted villages may be doing even better than enhanced shelters; according to HSD, last year the city increased its case management work in the villages, and it attributes the vastly improved exit rate to that effort. The Navigation Team also reports that homeless people are far more willing to accept a referral to an enhanced shelter or village than to a basic shelter; many see basic shelters as a worse option than living outside other than in the worst weather.

HSD has clearly learned the lesson that enhanced shelters perform better than basic shelters. It has been reducing its investment in basic shelter and increasing enhanced shelter spaces (see chart below). Unfortunately, as we saw in last fall’s budget process, some of the basic shelter providers such as SHARE/WHEEL have significant political connections in City Hall and manage to convince the City Council to restore their funding despite their poor results.

The City Auditor’s report pointed out that day and hygiene centers are a missed opportunity for the city to do outreach and case management, and the exit rates listed above prove that out. The report also notes that overnight hygiene centers are woefully under-provisioned; given the city’s unsheltered population, there ought to be over 200 toilet facilities available at night, and currently there are less than ten.

Next, we can look at the year-over-year performance of HSD’s programs to get people back into housing, including:

One of the key lessons from HSD’s work over the past two years is that efforts focused and customized for specific demographics tend to be much more successful than “one size fits all” programs. We see that in the 2018 results for several of the city’s homelessness programs.

Over the past two years, HSD has tailored its transitional housing program to youth and young adults, a group of people who are already at an age where they are going through a natural transition in their lives. By making the services offered appropriate to them, they have seen a much improved success rate in the last year. 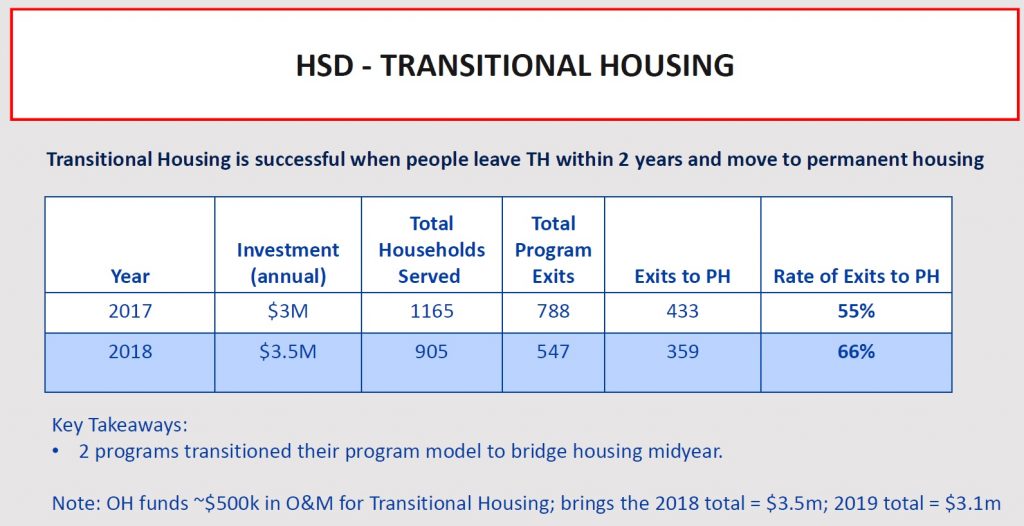 Prevention programs are maintaining a high success rate. This program too is getting tailored, with HSD in 2019 contracting out to organizations that can do “culturally competent” programs with specific demographic groups. 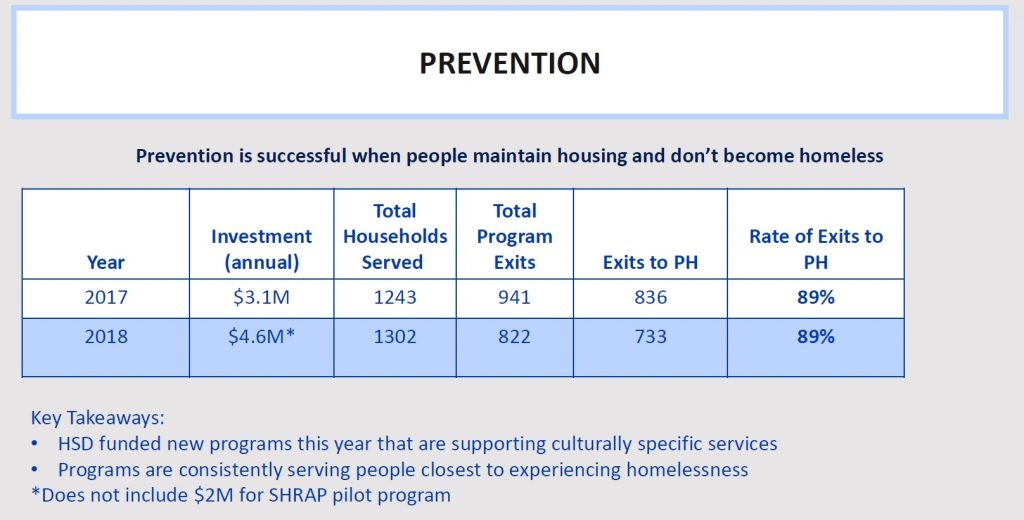 Along those lines, HSD is piloting a new “rental housing assistance” prevention program last April, targeting people stuck in the months-long waiting list for a Section 8 housing-subsidy voucher. If people start slipping into homelessness, the new program can provide them with financial support and keep them out of homelessness until the Section 8 voucher comes through. These programs turn out to be winners financially: the cost of supporting someone who is in the homeless system can run into the tens of thousands of dollars per year; a few thousand to keep them from ever entering homelessness is a much cheaper option.  HSD promises that more data on this new program will be available once it has been running for a full year. 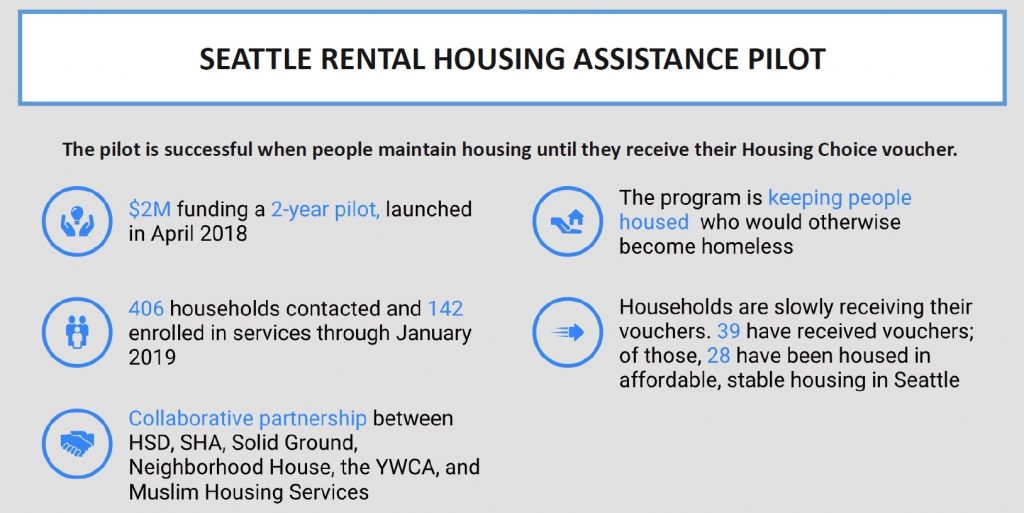 Rapid rehousing was scale dup in 2018, and continues to see incremental performance improvements.

The diversion program is one that Johnson is “really excited” about. He described it as a “conversation between two people”: the head of a household about to slip into homelessness, and a case manager. The conversations revolves around creative solutions for how to keep the household outside of the homeless system, and the case manager has some cash resources to make things happen if necessary. The program is getting significant funding from the Pearl Jam Home Shows.

Permanent supportive housing (PSH), a program geared toward providing long-term housing to people who need a large suite of wrap-around services, is particularly targeted to the chronically homeless. The stats are a little different, because many of the people it serves will never exit the permanent supportive housing program since their need for services may never go away. Instead it focuses on two forms of success: exit to permanent housing for the small fraction who can make it work, and maintaining housing in the PSH program. It’s the most expensive housing program for the homeless, but it has a very high success rate — no small feat given that it serves the group of people who are hardest to house.

So there is some good news in these numbers, such as they are: there is some evidence that the programs are getting incrementally better, and some of the successful ones are scaling up.

Here are some other take-aways from the 2018 report and press conference: