The Downtown Seattle Association, a local advocacy group boasting 2,000 corporate, nonprofit and residential members, has published a report on downtown construction in 2018, and what we can expect for the next 2+ years.

A caveat up-front: since DSA is an advocacy organization, we should take everything they say with a certain amount of skepticism. It’s a reputable organization so it’s doubtful that it would intentionally publish false information, but we should look particularly hard at the conclusions it draws from the data and its recommendations, with the assumption that they are chosen to reflect the organization’s advocacy agenda.

The big take-away from the report is that for at least the next two years, downtown construction doesn’t seem likely to slow down. That goes against the economic forecast that the City of Seattle has been using in its budgeting — good news in general for the city’s economic prospects, for jobs, and for the city coffers (though bad news if you don’t like construction cranes and traffic detours).

The number of buildings completed should be steady through 2020 based solely on the number already under construction — 68 projects in total. And there are a healthy number in the pipeline for 2021 and beyond as well, though some of those in “predevelopment” will get scrapped before they break ground. Still, even if only half of the pre-development buildings are realized, construction is looking robust into 2022.

Residential construction continues to be a large part of that; according to the report, two thirds of the buildings under construction downtown have a residential component. In 2018, 3,780 units were completed, somewhat off from the 2017 peak of 5,723. This year’s construction will yield another 3,535, and 2020 should jump back up to nearly 2017 levels (around 5,600). Remember this is just downtown, which has been about half of the city’s total residential housing production in any given year.

The 2019-2020 units are primarily apartments (7,648), with about 1,000 new condos in the mix. The report discusses the barriers to condo development downtown:

The state legislature is currently considering revising some of the laws around condo developments to encourage more condo development as more affordable first-time ownership opportunities.

The report also includes a graph that explains perfectly why Seattle is in a housing crisis now: for several years up through 2011, there was little residential construction — despite a substantial influx of new residents over those years.

Seattle got behind (in part because of the 2-3 years it takes for a construction project), and we’re now finally starting to dig out  — though there is still a lot of digging ahead of us. The good news is that the pipeline has almost 33,000 units downtown — though again, not all of the predevelopment units will get built.

Office construction ramped up after 2012; it was thought that 2017 was the beginning of a softening in commercial construction, but the DSA’s numbers seem to suggest otherwise. They identified 15 million more square feet of office space in the pipeline. 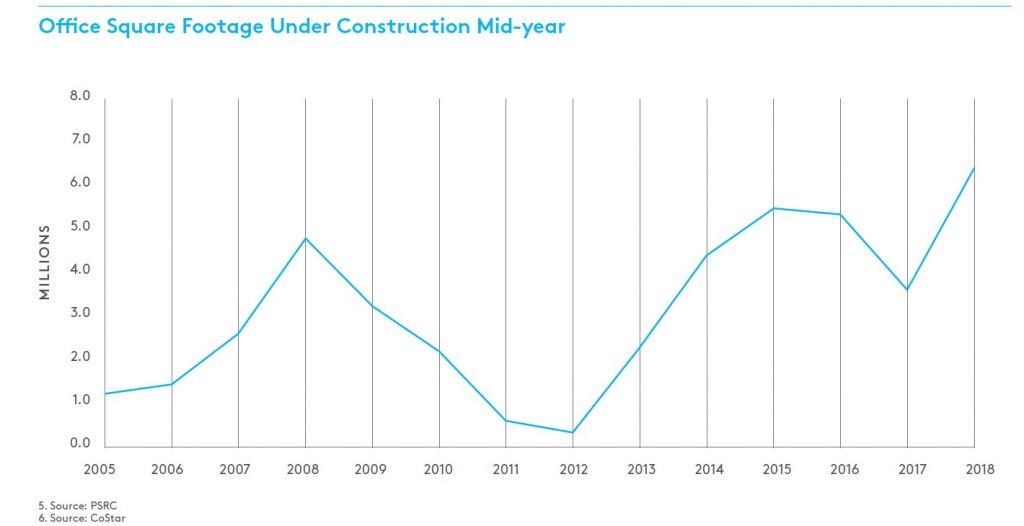 Hotel construction has been ramping up, with 2100 new rooms added in 2018 — a majority in a single project, the new Hyatt Regency with 1,260 rooms. 2019 will see few newly completed hotel rooms, but it’s expected to bounce back up in 2020 and the predevelopment pipeline is full for 2021 and on.

Some learnings from this report:

And speaking of MHA, it will be interesting to see how many affordable housing units are created through the MHA program downtown. MHA is already in place downtown; Council member Johnson and his colleagues on the Council sped it through in early 2017 to capture as much of the current construction boom cycle as possible. The new prediction of an extended boom is good news for MHA’s prospects as well.