A new report published by the City of Seattle shows that home internet access has become nearly universal, though some disparities remain.

The study, which is the fifth in a longitudinal series for the city, is actually a model for how to do this kind of survey work. Nearly 50,000 invitations to complete a survey were sent out, with specific outreach to low-income households, Seattle Public Schools parents, and even “tiny house village” residents. 4,315 responses were received, which were then tallied and re-weighted to match the overall demographic and geographic distribution of the city.

Overall, home internet access penetration is now at 95%, up ten points from 2013. And while in 2013 89% of the city’s residents had mobile phones but only 58% of those could access the internet, now 93% of Seattle residents have an internet-capable mobile phone. 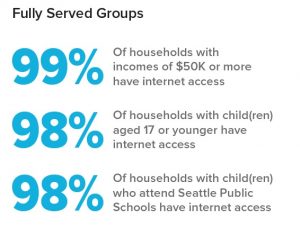 It also found no significant gender gap, across, women, men, and gender-conforming persons. 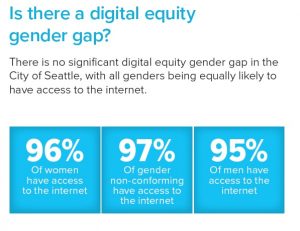 The differences between Council districts were also small, with the lowest being District 2 at 93% and the highest Districts 3,4 and 6 at 97%. 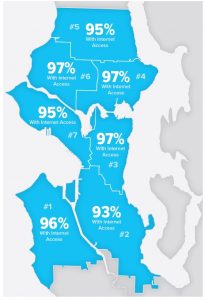 Where there are demographic differences, they relate to income, education, disabilities, and to a lesser extent age,  spoken language and race — though the for all of the demographic groups called out in the study, the vast majority of people have Internet access. 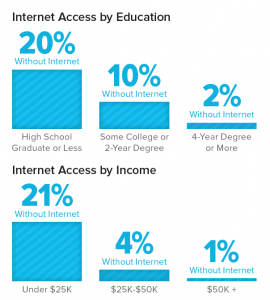 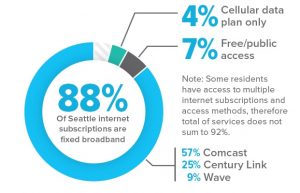 The study provides data on what people are paying for their internet access, but it’s difficult to draw any conclusions from the numbers since so many people bundle Internet access with other services such as television and phone. For those who pay for Internet access alone, the average monthly cost is $69. The amount that people spend on Internet and other services increases with household income, as one might expect.

The devices that people use to access the Internet — and how many a household has — varies by income as one might expect, with fewer computers and tablets in lower-income households, and nearly universal presence of both smartphones and computers in households making at least $50,000. 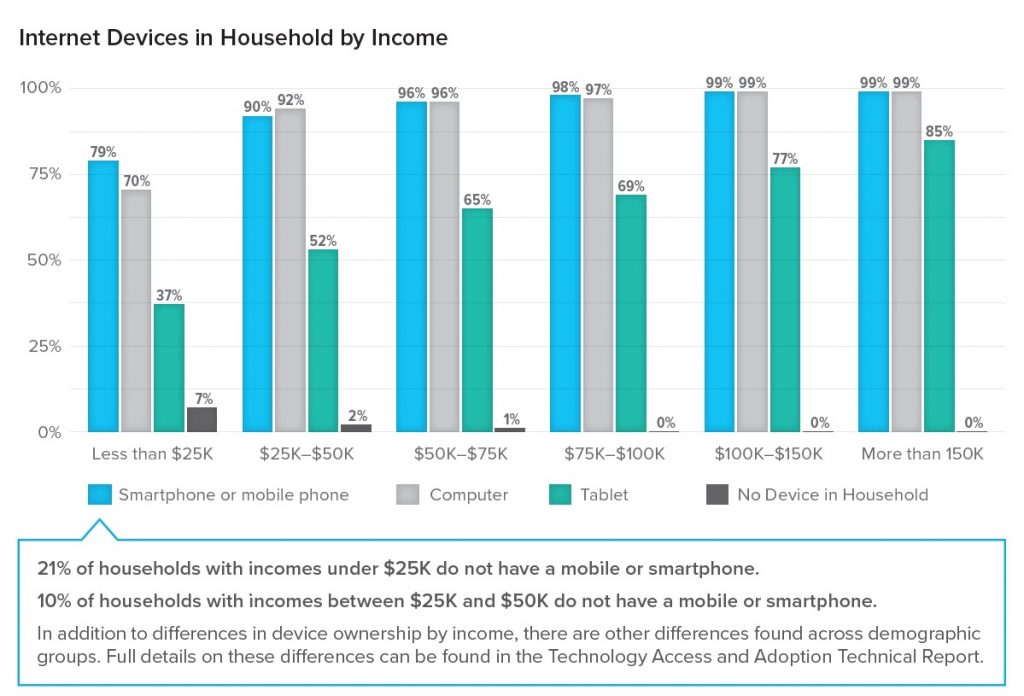 Interestingly, there is almost no variation across Council districts other than use of tablet devices. 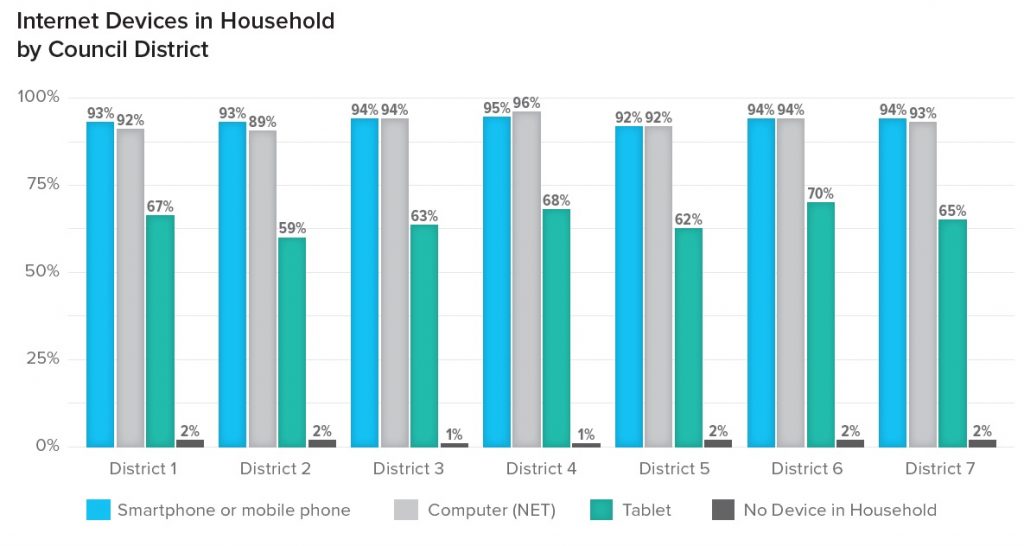 The study notes that the low-income programs offered by Internet access providers are now well-known or broadly used. Only 23% of low-income households that would qualify for the programs are using them; 53% are unaware of the programs, and 24% are aware but not using them.

There are a few surprises in the statistics for online activity — and a few things that are not surprising at all. Online activity increases with household income, and with the presence of children in the household. 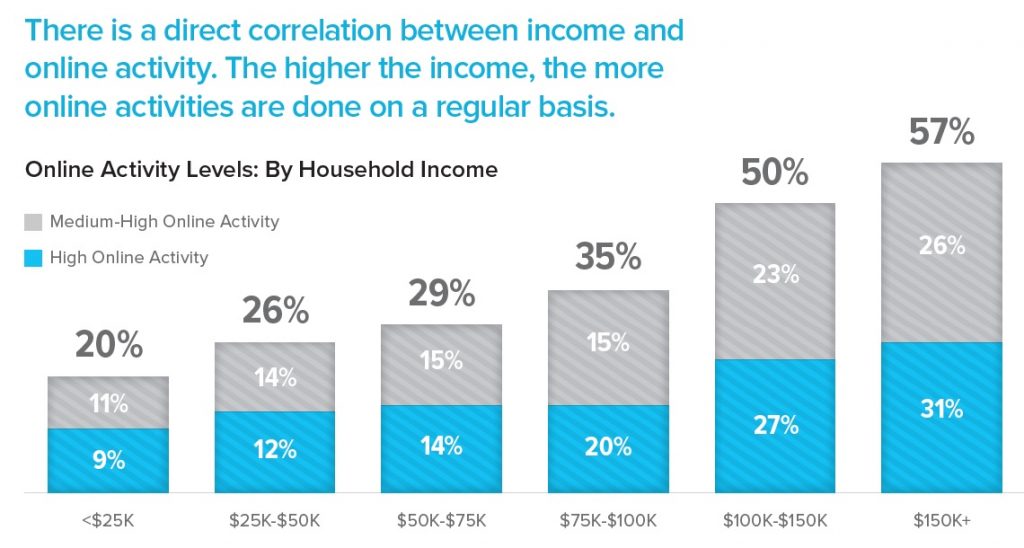 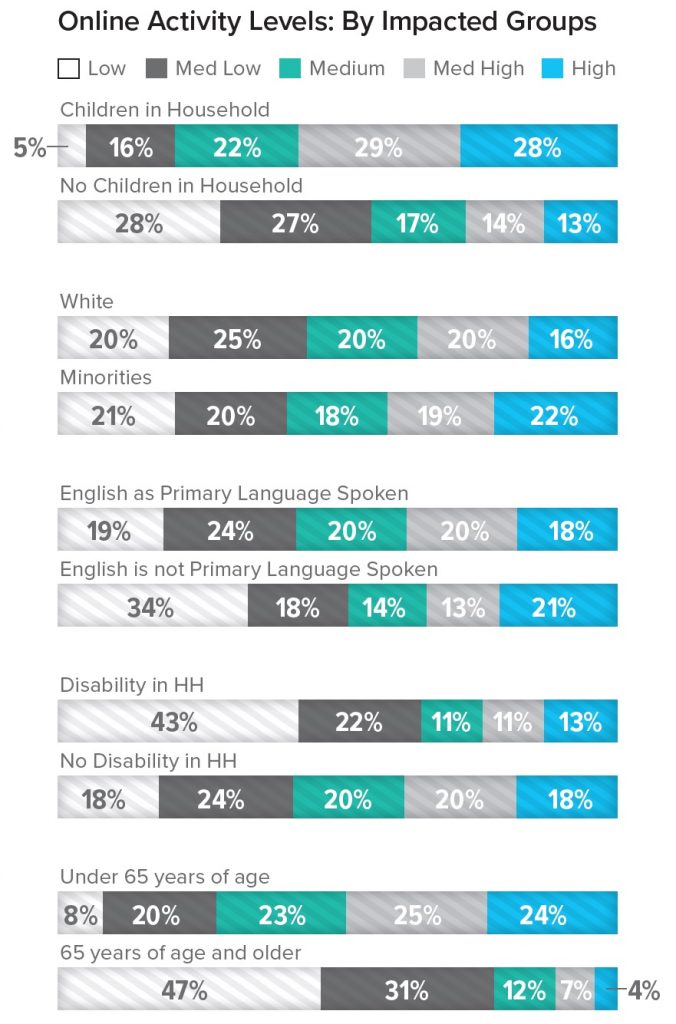 Households with racial/ethnic minorities, a primary language other than English, older adults, and individuals with disabilities also have a higher reliance on others to help with access and use of the Internet. That also correlates with lower income households. 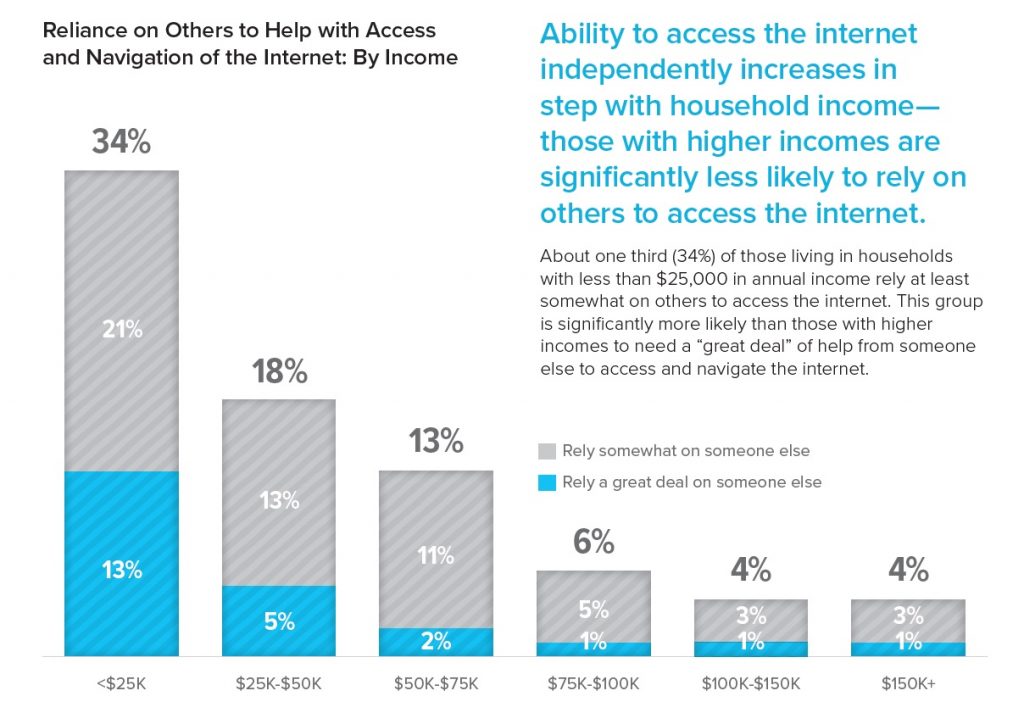 23% of residents said that they had some form of barrier that prevented them from using the Internet more.  Of those 23%, more than half said that the service was too expensive, while 34% cited issues with the quality or speed of their service.

So what are the big take-aways?

The report lists several tactical next steps for the city, some addressing the above points.  Not on its list, however, is further exploring municipal broadband. The report puts such an effort in a different light; no longer is the issue providing internet access in unserved (usually low-income) neighborhoods. The issues would more revolve around cost of the service, and making higher-speed service available. Given that past feasibility studies have shown municipal broadband to be a poor idea in that it would have a high up-front capital cost to deploy it and would end up charging similar rates to the existing players, it would seem that the city would be better off increasing its push on take-up of the existing low-income discount programs, working with community organizations to increase access to the internet, and perhaps expanding its own discount, grant and educational programs.