This afternoon, the Office of the Hearing Examiner released its ruling on an appeal of the adequacy of the Final Environmental Impact Statement (FEIS) for the City Council’s proposed legislation relaxing rules on the construction of ADUs (aka “mother in law apartments” and “backyard cottages”) in single-family residential zones in Seattle.

An FEIS must lay out the probable impacts of either a specific project (like an expansion of the Convention Center) or a “non-project action” such as the MHA legislation that upzoned many parts of the city but did not itself build anything. The ADU legislation falls into the latter case. Also, an FEIS for a non-project action that impacts a large area is required to analyze the general impacts of the action, and is not required to dive into the specific context of every individual neighborhood or parcel of land that would see impacts. And an FEIS is required to provide analysis across a number of different categories of impact, as specified in state law. An FEIS evaluates several reasonable alternatives within the parameters of the action; it is in tended to be a tool for helping policy makers’ decision-making, and as such it doesn’t make recommendations itself; It simply presents and analyzes the alternatives. Finally, a finding of negative impacts of an alternative in an FEIS doesn’t prevent policy-makers from choosing it: the point of the FEIS it make ensure it’s a well-informed choice.

An appeal of an FEIS challenges its “adequacy.” An FEIS can be found inadequate if it provides insufficient analysis of a particular impact that was required to be analyzed under the law. It can also be found inadequate if the analysis it provides on a particular area is found to be flawed; however, the bar is very high for that finding: an appellant must present compelling evidence of the flaw, and present compelling evidence that there is a better way to do the analysis.

The ADU appeal, filed by the Queen Anne Community Council, challenged three areas of the FEIS:

In addition, TreePAC intervened in the appeal as an additional party, and added its own challenge that the FEIS failed to properly analyze the impact on the tree canopy.

The Hearing Examiner found for the city on all four of these issues. The examiner found that while all the expert witnesses on both sides were credible, either the appellants’ critiques of the FEIS’s analysis was effectively rebutted by the city’s own experts, or the appellants failed to provide hard evidence that their alternative analysis would provide a better analysis. Noting that the law requires an FEIS to have a reasonable analysis but not necessarily a perfect or all-encompassing one, in the face of two reasonable alternatives for analyzing the impacts the examiner must rule for the city — and did. 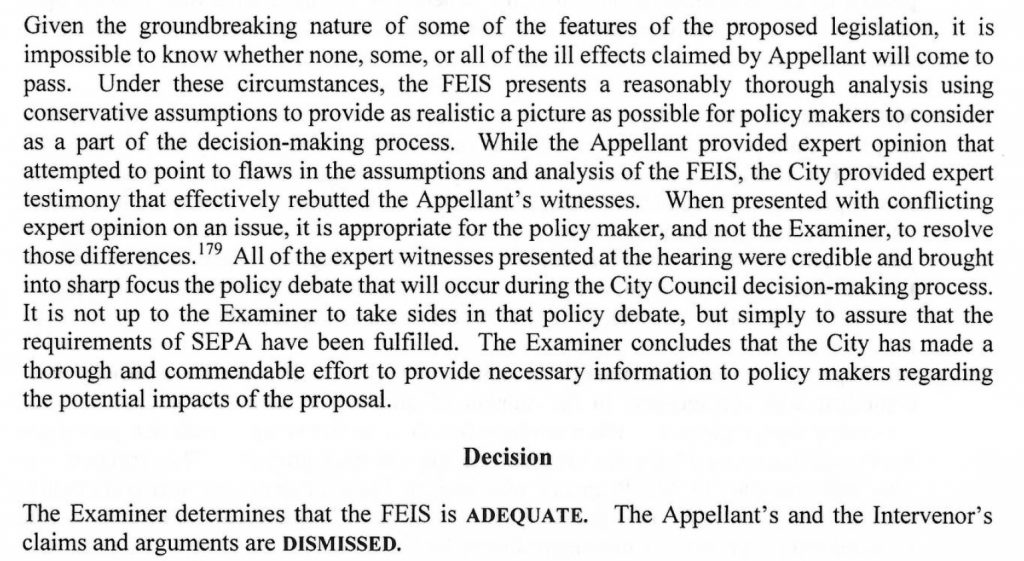 The appellants can file a further appeal of the Hearing Examiner’s ruling in state courts, but that must be done as part of an appeal of an action that the city takes as a result of the FEIS, not on the basis of the FEIS itself.

Both Council member Mike O’Brien, the sponsor and champion of the ADU legislation,  and Mayor Jenny Durkan issued statements this afternoon praising the Hearing Examiner’s ruling.

In anticipation of a possible favorable ruling from the Hearing Examiner, O’Brien has started a series of discussions in his committee on the legislation (a draft of which has not yet been released). The first hearing, held last week, covered the restrictions in “floor area ratio” to prevent McMansions being built (tearing down existing smaller houses) as alternatives to adding ADUs, as well as removing the “owner occupancy” requirement. He intends for the next hearing to be on May 29th, followed by a public hearing on June 11 — at which point he expects to have draft legislation available.

Within the Hearing Examiner’s decision there are several comments suggesting that she found the policy implications of some of the appellants’ testimony compelling and in some cases even “alarming,” including the potential displacement impacts and the possibility that home owners might build two additional ADUs on a property and then convert them to condominiums. However, she noted that those are indeed policy questions that were properly explored in the FEIS and ultimately must be addressed by policymakers, not the Hearing Examiner.