This morning, the City Council’s Budget Committee received a briefing on the revenue outlook for the rest of 2019 and beyond, as well as the overall financial condition of city government. The theme running under all of it: winter is coming.

Both the State of Washington’s Economic and Revenue Forecast Council and the City of Seattle have been saying for some time that a recession is coming. You can read the full rationale for the state’s predictions here (pay special attention to slides 15-25). City Budget Director Ben Noble summed it up this morning it a slide showing the Wall Street Journal’s survey of economists on when they expect a recession to begin:

In many ways it’s still hard to notice, but Seattle is definitely starting to see the effects of a softening economy. Population growth has slowed.

Employment growth has slowed both at the national and local level. 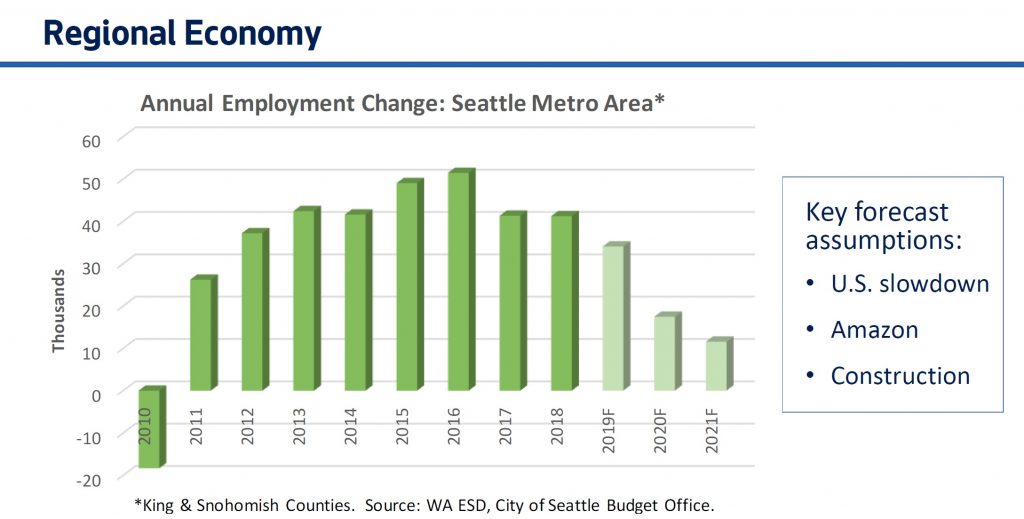 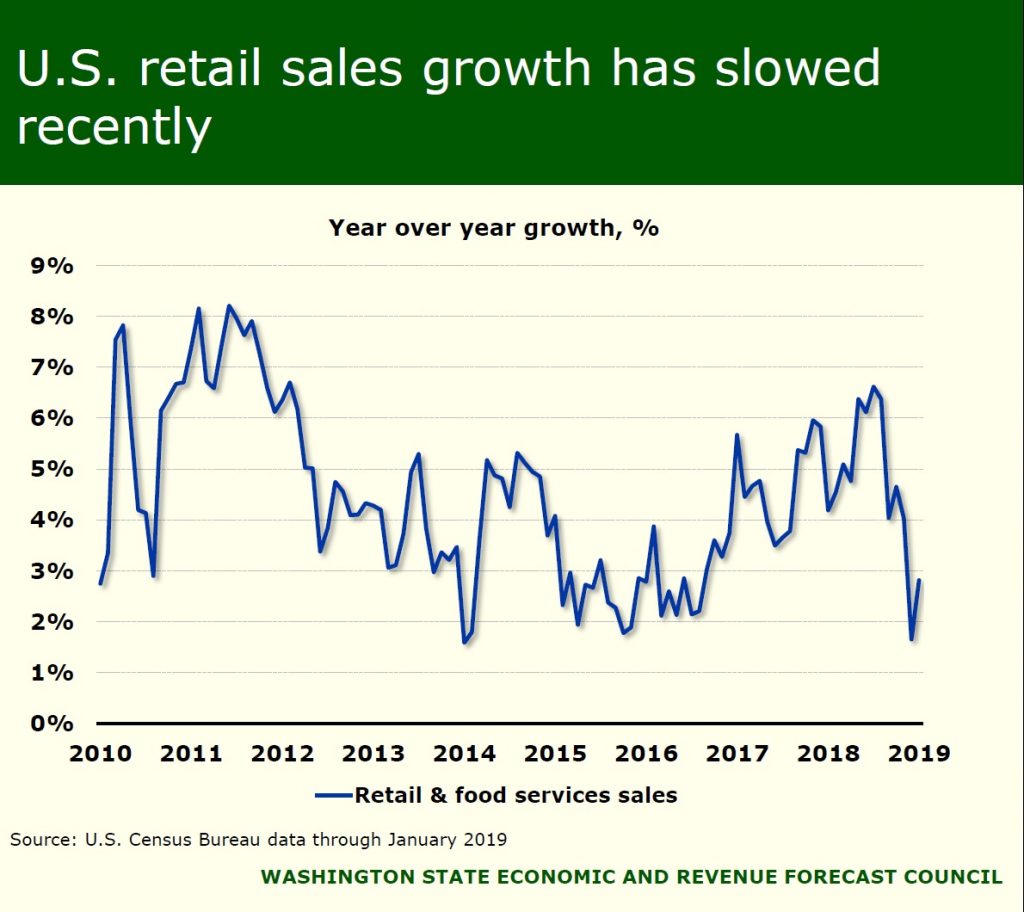 Naturally this affects Seattle’s biggest employer, Amazon, and partially explains the cooling-off in its hiring (along with the head tax, HQ2, and everything else going on). Overall, retail employment has been flat recently here in the Seattle area. The city notes that between 2010 and 2018, 2/3 of the employment growth in this sector was due to Amazon.

The housing market has also cooled: both rental and home sales, though there’s a fair amount of anecdotal evidence that the rental market is cooling unevenly and the rent on more affordable units is still going up. 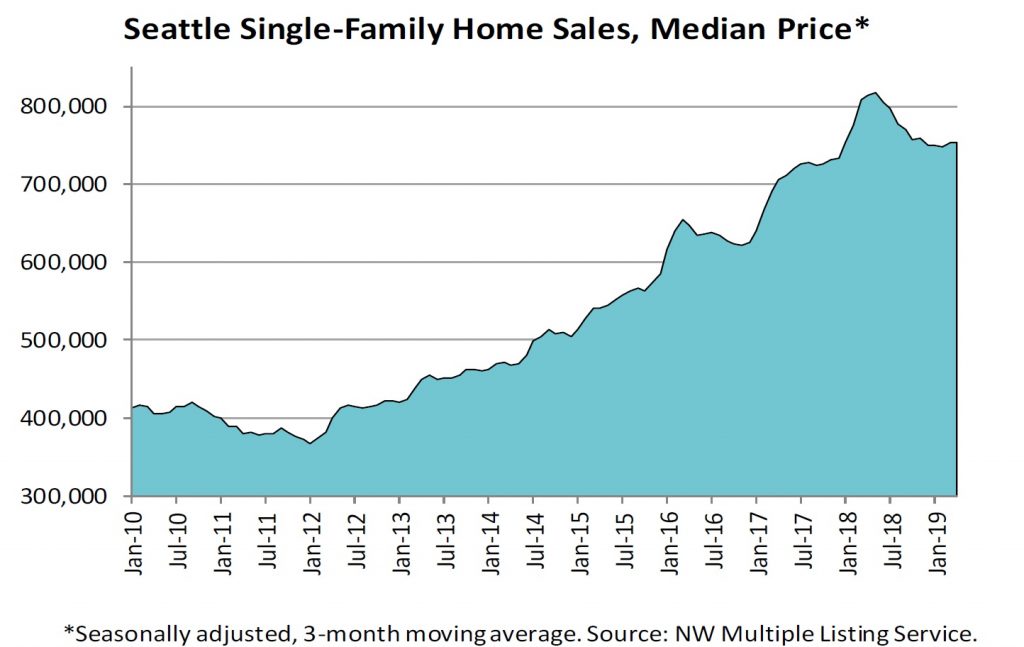 And construction seems to have peaked in 2017 and is tapering off as well. City officials said this morning that the early 2019 numbers are off from last year’s mark. 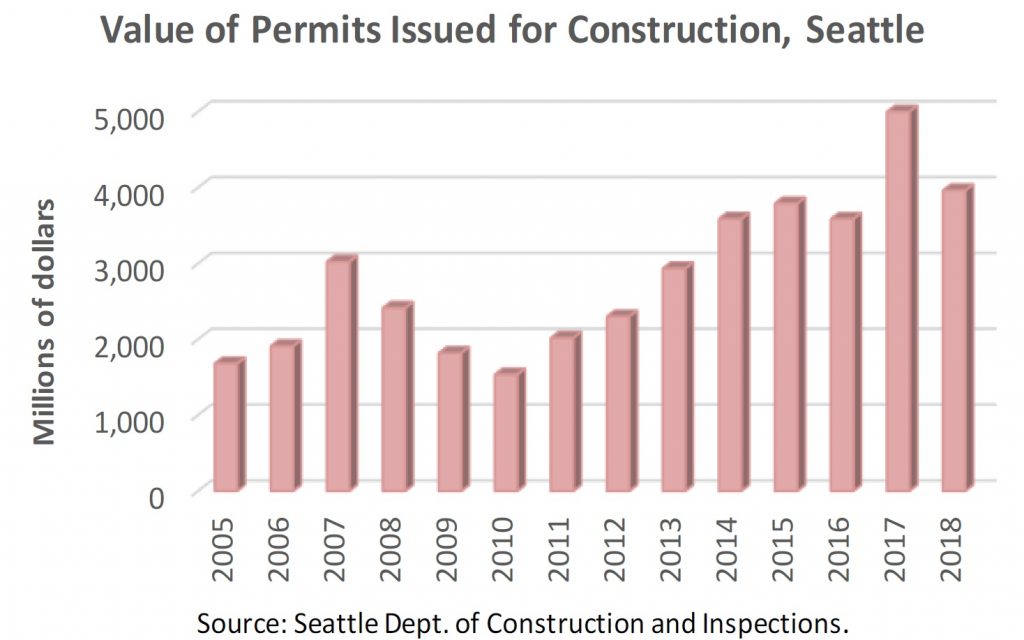 So what does this mean for the city’s revenues? For the general fund, it means that revenue growth will slow and be much closer to inflation — meaning the city won’t be gaining much buying power. 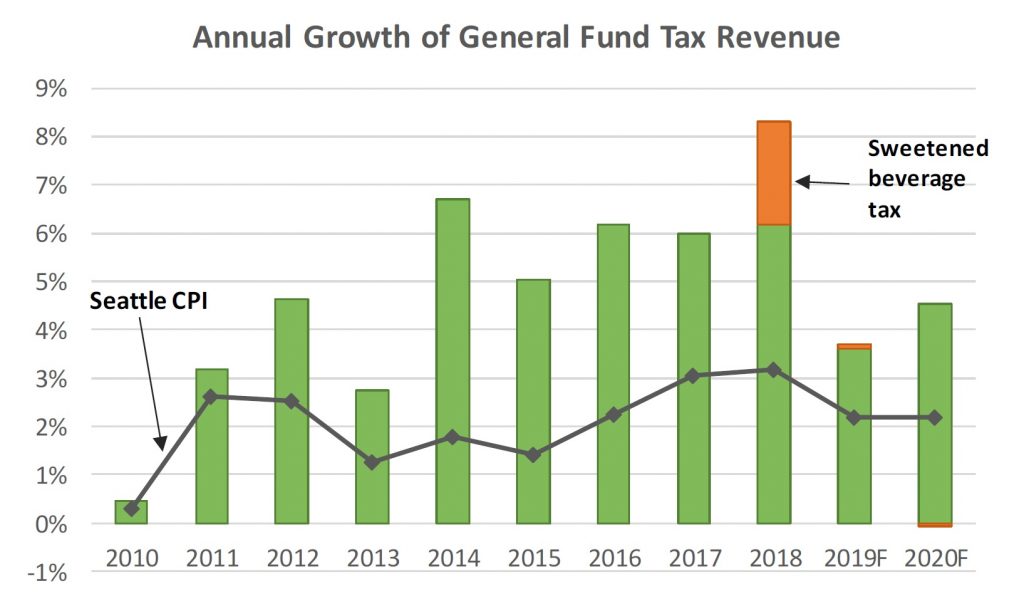 The slowdown in construction is particularly worrisome because the city’s revenue stream has become increasingly dependent on construction-related sources; while in 2010 it was only 4.2% of general fund revenues, last year it was 8.6% — $116 million in total.

That doesn’t include Real Estate Excise Tax (REET), one of several restricted-use revenue sources that is also somewhat construction related. However, the city is predicting that REET will cool off slightly but remain at record levels for the time being, with increase residential construction replacing stagnating commercial activity. 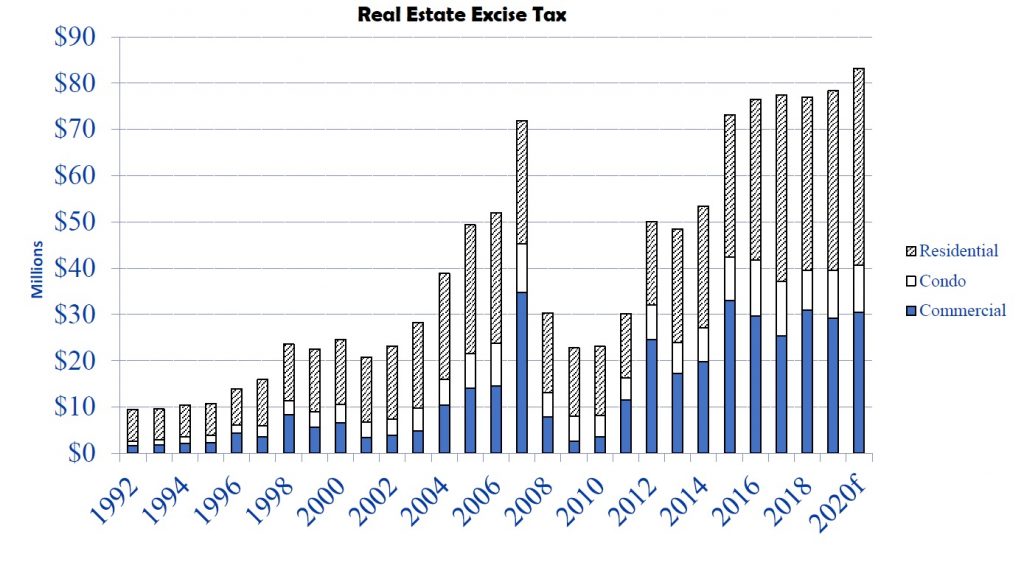 The bottom line for the general fund is that last fall’s projection for 2020 revenues looks to be nearly spot-on, with only about $3.3 million in additional general fund revenues for the Mayor and the City Council to fight over. Revenues from the AirBnB tax, the commercial parking tax, REET, and the school zone camera fund are also expected to be down. 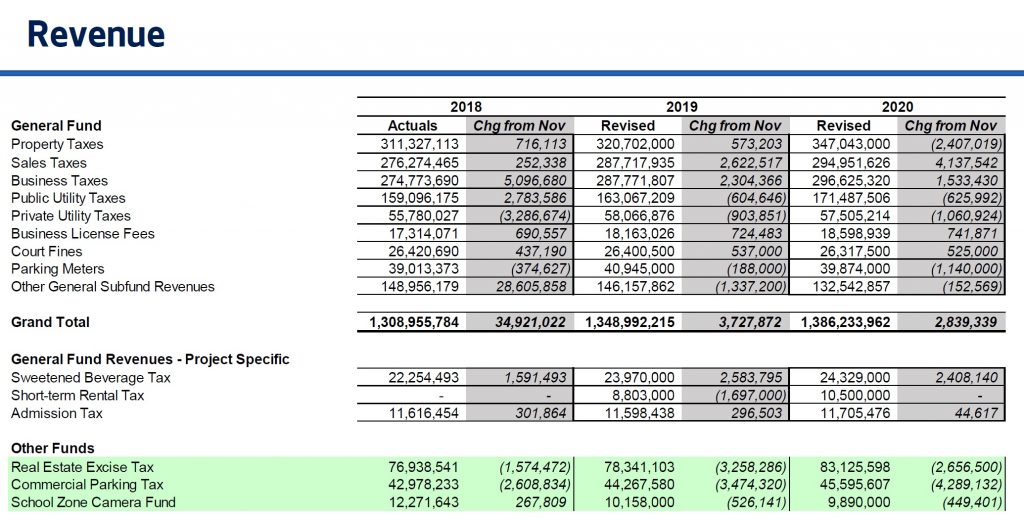 In a moment of irony, the one tax that was designed to decline over time, the Sweetened Beverage Tax, is projected to continue increasing. That forced Council members O’Brien and Gonzalez to work extra hard this morning to defend the tax as “not a policy failure” by claiming that the original tax had multiple policy goals (as opposed to spending priorities), including funding education and food-access programs. The City Budget Office jumped on the “heads-in-the-sand” bandwagon, claiming that they had no evidence that consumption of sweetened beverages has gone either up or down since the tax was introduced (expert studies are ongoing).

At the end of every budget year there is a balance left in the General Fund that carries over to the following year. The city is required to pass a “balanced budget” where that end-of-year balance can’t go below zero. Normally the Council passes a budget that spends down some of the carried-over balance, but then over the course of the year some projects don’t get done, money doesn’t get spent, some revenue sources come in high and the end-of-year balance ends up higher that originally projected. This is in large part because the city budgets very conservatively, particularly for revenues. However, in the 2019 budget Mayor Durkan removed many open, unfilled positions in city government that had created payroll underspend in prior years, and that — combined with the softening revenues — means that the end-of-year windfall is likely to be far less this year than in the past. Last fall’s 2-year budget projected that the 2020 end-of-year general fund balance would be zero. As of this morning, they are projecting it to be $4.9 million. For a budget of 1.4 billion, that is a rounding error; there is essentially no leeway in that budget, and this coming fall’s 2020 budget deliberations are going to either be very quick or very painful.

The good news here is that the city knows that the days of big windfalls are over, at least for the time being, and it is managing accordingly. Noble said this morning that as city departments start planning for the fall budget process, he is instructing them that the “endorsed” 2020 budget written last fall is likely to be their real 2020 budget, so if they want to add spending they need to find a way to pay for it elsewhere. And when Council member Gonzalez asked him why his office hadn’t submitted a “supplemental budget ordinance” to the Council for the first quarter of 2019, he explained that he is discouraging department heads from asking for more money at this point.

The City Auditor’s report this morning on the city’s financial condition as of 2017 (the most recent year where complete audited records are available) highlights several other ways in which the city has built some resilience to a recession. For one, the general fund revenues come from a diversified set of sources, including three different taxes (property, B&O and sales), in addition to service charges (for things like permits), and grants received. 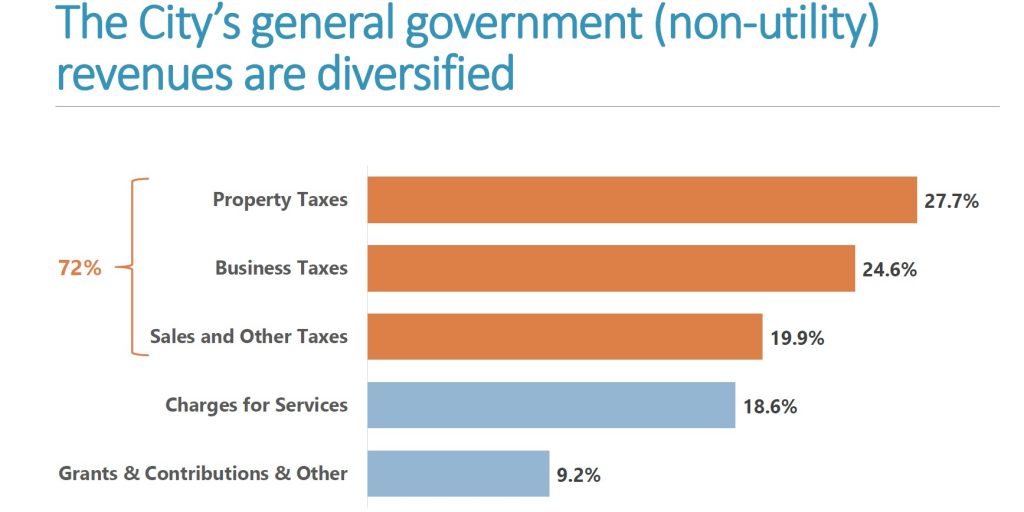 It also has a substantial amount of liquid assets, more than necessary to cover short-term needs. 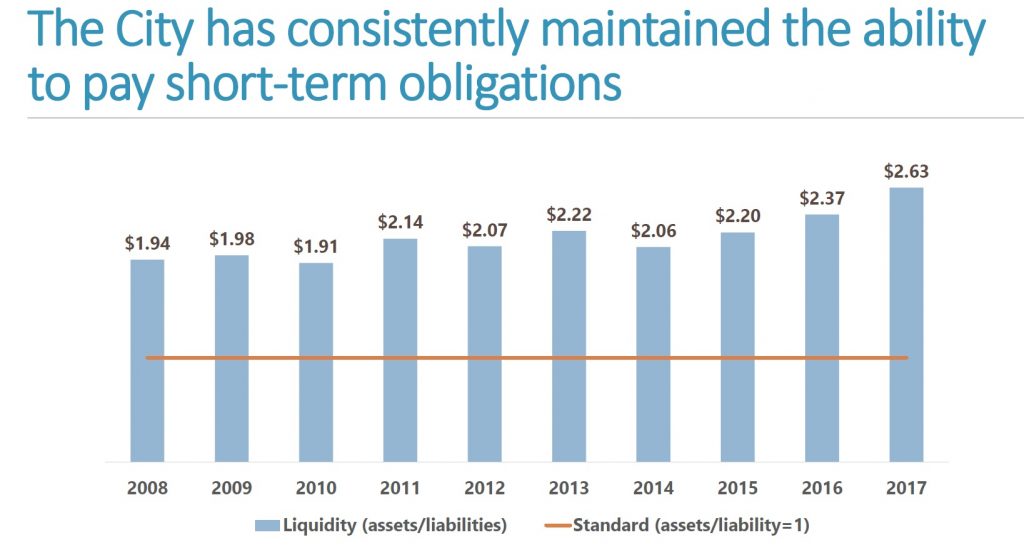 It has maintained high bond ratings, which allows the city to borrow money at low rates. And it has two well-funded reserve funds: the “rainy day” fund to buffer a severe downturn in revenues (such as a recession), and an emergency fund to deal with critical emergent needs such as a bridge collapse or post-earthquake recovery. The one lowlight in the report is SCERS, the city employees’ pension fund. As of January 2018, SCERS was underfunded by $1.2 billion. In 2013, the city committed to fully fund SCERS by 2042 through annual payments into the fund.

Is Seattle’s city government ready for a recession? About as ready as it can be. It’s already pulled back on making major new investments (despite the clear needs for a better homeless response and more affordable housing). It has funds in reserve. It has clear-eyed projections for future revenues. It has a high credit rating so it can borrow money if necessary. It’s unknown how deep a recession might be, or how long it might extend, but at least the city won’t get caught by surprise when the recession arrives.

We can even hold out hope that the city might see it as an opportunity. Transportation and housing projects have fallen off in the past few years as construction costs have skyrocketed. But in a recession, if construction gets cheaper that might be an excellent time for the city to catch up on its own construction — and provide a small economic stimulus to the local economy in the process. It’s ability to do so is certainly questionable given its high reliance on revenues derived from the construction boom, but if REET funds sustain it might still be possible.

Now we wait for winter.