This morning Judge Robart ruled “from the bench” that he has found the City of Seattle to be partially out of compliance with the 2012 Consent Decree between the Department of Justice and the city regarding biased policing. 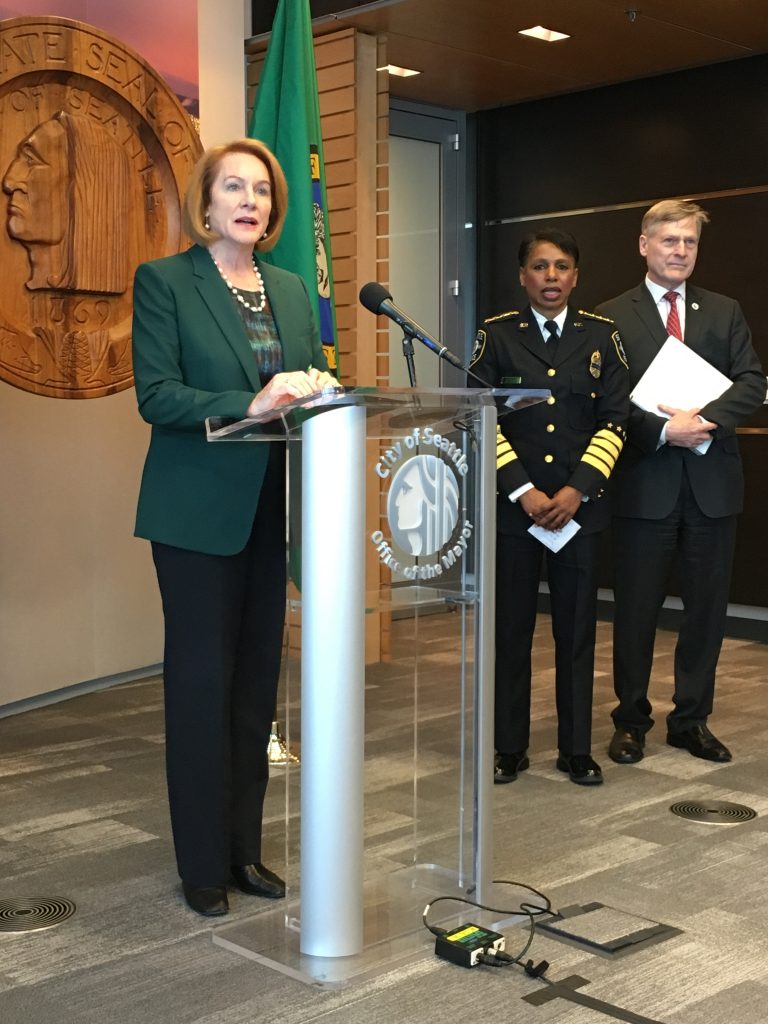 A quick recounting of recent history: in January 2018, Robart found that the city had achiieved “full and effective compliance” with the terms of the Consent Decree. That ended Phase One of the decree, and moved the city to Phase Two, under which the city must sustain compliance for two years before the judge can end Phase Two and terminate the Consent Decree.

However, in that ruling Robart wrote:

The court further notes that the City still has not named an Inspector General or concluded labor negotiations with all of SPD’s labor unions. Although the City has executed a new collective bargaining agreement with SPMA, it has not yet reached agreement with the Seattle Police Officers Guild (“SPOG”). The court has previously indicated that it will not grant final approval to the City’s new police accountability ordinance until after collective bargaining is complete… If collective bargaining results in changes to the accountability ordinance that the court deems to be inconsistent with the Consent Decree, then the City’s progress in Phase II will be imperiled.

In essence, Robart was saying that he was carving out accountability from the finding of full compliance and would wait to make a separate finding on that until the SPOG contract negotiations concluded.

In March of 2018, the city submitted its plan for sustaining compliance for the two years, and later that month Robart blessed it. Last fall, the city completed its negotiations with SPOG, and in November, over the objections of the CPC, the City Council approved it — noting that there were a small number of issues that it was concerned about and hoped Robart would review. In early December, Robart issued an “order to show cause” why he shouldn’t find the city had fallen out of compliance due to the terms of the SPOG contract and the overturning by an arbitrator of a disciplinary decision made by the Chief of Police in the case of Officer Adley Shepherd. Between then and March, the city, the DOJ, the CPC, and other parties field legal briefs with the court discussing their views on the questions Robart raised in his order.

After weeks of silence, on April 22 Robart scheduled today’s hearing “to address the issues the court raised in its order to show cause… and the parties’ and the Community Police Commission’s responses to that order.”  None of the parties knew what to expect from today: whether Robart would pummel them with questions, have an in-depth discussion of particular issues, or issue a ruling. It turns out it was the third: in a fairly uncharacteristic move for Robart, he ruled from the bench today — though his ruling was light on details and he deferred much to a forthcoming written ruling.

Here’s what he did say, over the course of a speech that lasted over half an hour:

Usually Robart is on top of the details, but in his bench ruling today he left out most of the important ones. He didn’t explian his legal conclusions for why he found fault with the three specific areas of the SPOG contract. He also didn’t specify whether he is officially stopping the 2-year sustainment period, which would require it to start from the beginning again once the issues are resolved and the court finds the city once again in full and effective compliance. He did say that he expects to issue his written ruling early next week.

The fact that he didn’t issue the ruling today obviously means he isn’t done writing it yet — one would assume that on April 22nd when he scheduled today’s hearing, he expected to have it done by today. But the fact that he uncharacteristically left out so many critical details suggests he may not even be done with his legal arguments, or working out the full implications of his decision.

He left some big legal issues on the table along with the logistical details. One of the biggest is his comment suggesting that an arbitrator should not have the power to overturn the Chief of Police’s disciplinary decision. Under Washington state law, public employees have the right to arbitration, so Robart seems to be arguing that arbitration for police officers’ disciplinary matters is not compatible with constitutional policing — i.e. that the state law violates the U.S. Constitution when applied to police officers.

Given the big gaps in details in today’s bench ruling, essentially nothing is going to happen until Robart issues his written ruling early next week.

Shortly after the hearing, Mayor Durkan, City Attorney Holmes, and Police Chief Best held a joint press conference in City Hall. While all three deferred many questions until after Robart’s written ruling is issued, Durkan put her best spin on it, highlighting Robart’s finding that the city was in full compliance with everything in the sustainment plan, and his effusive praise for SPD officers. She also noted that the CPC had raised “dozens and dozens of issues” with the SPOG contract, and Robart had narrowed that list down to three. In response to a reporter question as to whether the city is “willing to take on SPOG” in further contract negotiations, Durkan pushed back on characterizations of the relationship between the city and SPOG as oppositional, saying “Don’t create a conflict that may or may not exist.”

This afternoon, Mayor Durkan, the CPC, and Council Member Lorena Gonzalez all issued statements with their take on this morning’s hearing and Robart’s bench ruling.

Stay tuned for more next week, when we get to dissect Robart’s written order.