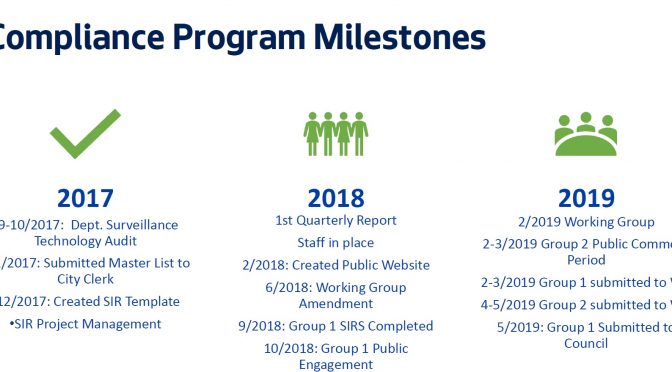 This morning, two technologies came up for approval by the Council’s Governance, Equity and Technology Committee, and it quickly became clear that despite the best of intentions, the surveillance technology ordinance has created a big, slow, bureaucratic mess.

Neither of the two technologies on the agenda this morning, SDOT traffic cameras and SDOT license plate readers, got much more than perfunctory presentation and discussion. Instead, the Council members and representatives from SDOT, Seattle IT, and the CSWG spent much of the time discussing all the ways the review process had gone wrong. This conversation was teed up by a letter from Shankar Narayan of the ACLU and Rich Stolz from OneAmerica, both of whom are members of the CSWG, detailing their observations of the faults in the process.

Here’s the approval process that is supposed to be followed for a technology:

As was described this morning, this process has turned out to be unwieldy to say the least. Writing the SIR and conducting community outreach takes 6-7 months, and results in an SIR document of around 150 pages (see the traffic camera and license plate reader SIRs). Worse, this creates a new bureaucratic monster every time an SIR is officially approved by the Council (as the ordinance requires), because according to the City Attorney’s office the entire 150-page document assumes the force of law — even though it contains mistakes and portions are sometimes outdated or just plain wrong. Ideally what the Council would approve is “policies and procedures,” i.e. what rules for using the technology the city is signing up to obey. But particularly in the case of the backlog of technologies already in use that need to be run through this approval process, the SIRs are mostly documentation of existing practices (as currently understood by the personnel using them) and management’s “trust us” defenses of those practices against concerns raised by community members and the CSWG.

The city departments are slogging their way through the necessary work to create SIRs (they are required to run all the existing in-use technologies through the process by March 2020) but it’s the all-volunteer CSWG that’s truly drowning in 150-page SIRs — especially when the city delivers 12 of them at a time.

No major solutions were proposed today, but some minor tactical adjustments were floated, including:

Of course, little of that can just be done by fiat — because two years ago the Council laid out the entire process in legislation and passed it into law. Now the stakeholders need to work with Council staff to amend that ordinance in order to implement any substantive changes. And none of the ideas above actually reduce the amount of paperwork that city departments need to create (in fact, they increase it).

The surveillance technology ordinance was a well-intentioned piece of legislation intended to ensure that the city is transparent and thoughtful about how it adopts technologies that might be used for surveillance purposes.  But now, nearly two years into its implementation, it serves as a useful lesson in how easy it is to legislate government inefficiency.