According to SDCI, the City of Seattle contains 1,145 buildings with unreinforced masonry that could collapse in a major seismic event. While records are incomplete, the city estimates that about 11% of those have already retrofitted the building to address the issue. Another 68 of them are owned by various government entities. That leaves 944 buildings in private hands with unreinforced masonry: in total about 20,200,000 square feet, containing 10,400 residential housing units with 22,050 residents. Thirty seven of those buildings contain 1,559 designated affordable housing units.

Every few years the city attempts to move forward legislation to mandate that buildings with URM be retrofitted, but it ends up balking at the total cost to do so.  Earlier this month, the National Development Council delivered a report to the city on what it currently costs to retrofit a URM building and the financing options available that might help. Among other things, it found that the $5-$45 per square foot range used in prior studies to estimate costs in many cases significantly understates the real all-inclusive cost.

The report categorizes buildings according to the severity of the retrofit required:

When hard costs, soft costs, contingencies, taxes, and relocation expenses (for tenants that need to be moved out during construction) are included, the projected cost per square foot for retrofit ranges from $32.44 for Bolts+ to $95.47 for a full seismic retrofit. 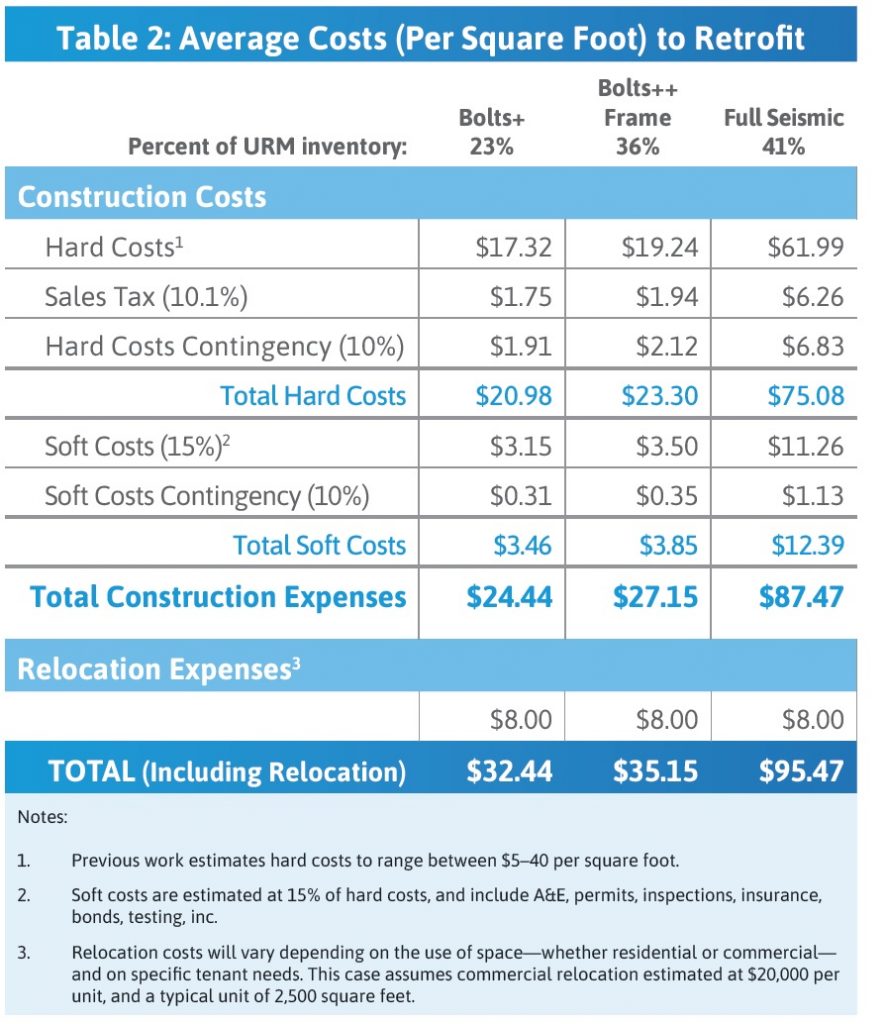 Do the math, and you find that the price tag to repair all 944 buildings is nearly $1.28 billion dollars — the vast majority going toward “full seismic” retrofits.

Making matters worse, NDC points out that retrofitting URM buildings doesn’t necessarily increase their economic value, as there is no evidence that retrofitted buildings command higher rental prices than ones that aren’t. However, there is an expected decrease in insurance premiums after a building is retrofitted, so that helps a tiny bit.

$1.28 billion is a lot of money for the building owners to come up with. Here’s what it looks like for a 3-story, 22,000 square foot mixed-use building that needs the cheapest “Bolts+” retrofit, according to NDC; the total cost is about $642,000. 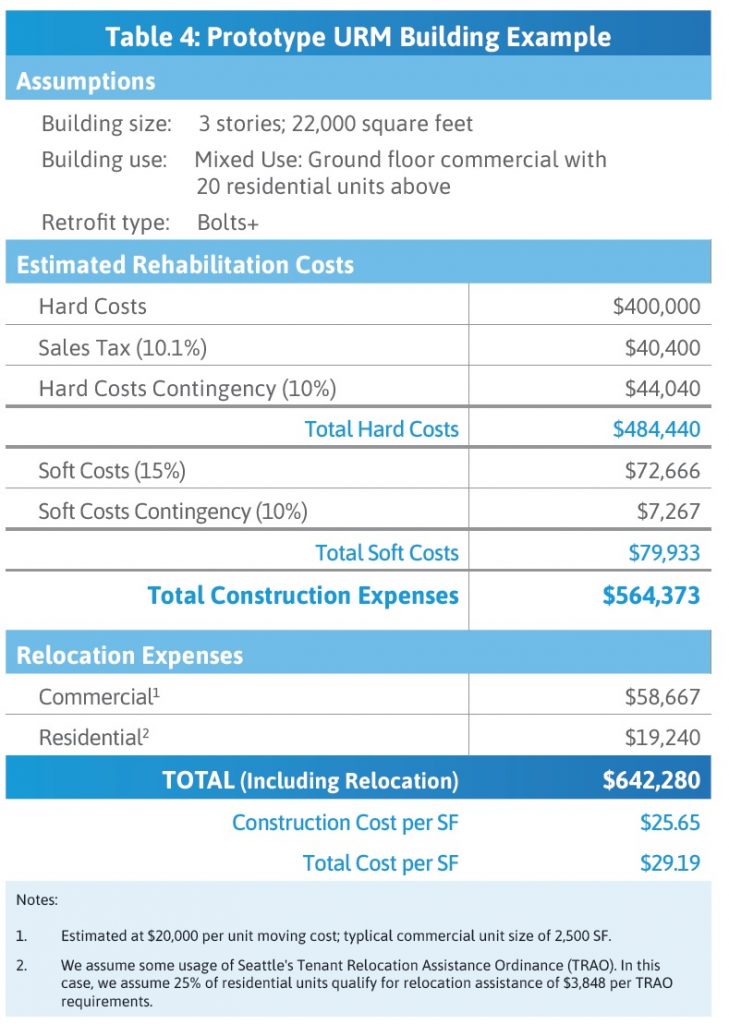 There are some ways that government can ease the pain of this financial hit. First, it can offset some of the cost through a variety of incentive tax credit programs, such as the Rehabilitation Tax Credit, the Historic Tax Credit for landmarked buildings, and the Low-Income Housing Tax Credit. Plus, the city’s Tenant Relocation Assistance Ordinance can help to cover relocation costs for low-income tenants.

While the Washington State Constitution (Article VIII, Section 7) prohibits cities from giving away or loaning city funds “except for the necessary support of the poor and infirm,” there are some approved loan programs that use state or federal funding from FEMA, HUD Community Development Block Grants, and PACE.  Still, cobbling these sources together is likely to provide only a minority of the funds required for any retrofit projects.

NDC also looked at other sources of financing that might be available for retrofit projects, depending on the public vs. private approach taken. For example, if the city wanted to raise additional funds to put toward URM retrofit projects and could squirm its way around the constitutional limits on lending money, it could leverage its debt issuance power (and its excellent credit rating) at a lower rate than private property owners would likely receive on their own. But great loan terms will only make a tiny difference in the large cost of retrofitting 944 buildings — especially if revenues won’t go up to help pay the debt service that landlords incur.

In short, the NDC study highlights the sticker-shock of trying to address the unreinforced masonry problem: it’s going to take a ton of money, and most of that burden falls on private property owners. None of the long list of financing options cover more than a small share of the total cost, which makes it difficult for the city to justify a new law making URM retrofit mandatory that would put many building owners deeply in debt. But in the absence of such a requirement, thousands of Seattleites — many of whom are vulnerable, low-income residents — continue to live and work in older, “natrually affordable” URM buildings every day, while city officials hope that they can find an affordable solution before the next major earthquake hits the city.