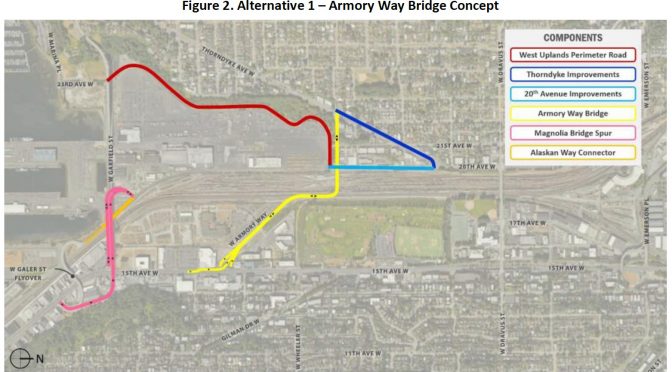 The City of Seattle commissioned the consulting firm SCJ Alliance to do a planning study on options for replacing the aging Magnolia Bridge. Last month they received SCJ’s report. Here’s what it said.

The current Magnolia Bridge was built in 1930 and despite ongoing maintenance has deteriorated and is reaching the end of its life. The bridge is a key access corridor to the Magnolia community, as well as to Smith Cove Park and Elliott Bay Marina at the southern base of the hill.

Each one was assessed on five criteria:

Within each of these five criteria there are sub-components. The subcomponents are each weighted in their importance, as are the five criteria themselves in the final scoring. (don’t sweat the details on this; we’ll come back to it later) 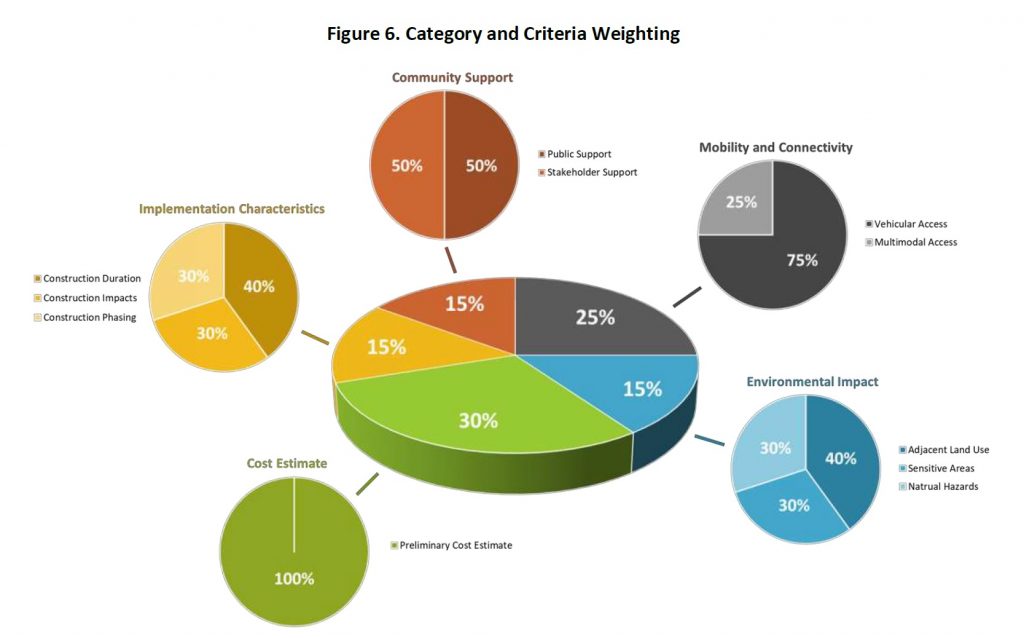 Mobility and connectivity was divided up into “vehicular access” and “multimodal mobility,” with heavy weighting toward vehicular access. The study projects changes to point-to-point vehicle travel times under each of the four scenarios. Alternatives 2 and 3 fared particularly poorly, with travel times from downtown to Magnolia Village and Smith Cove particularly brutal. Alternative 4, replacing the Magnolia Bridge, on the other hand did very well. 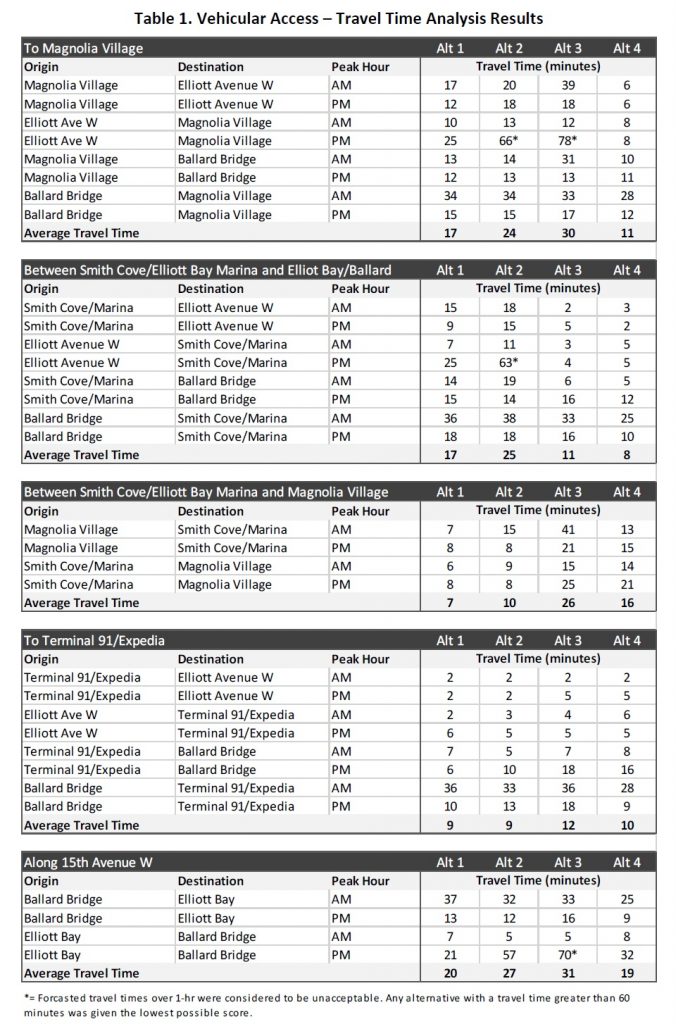 The study also analyzed quality of connections for pedestrians, bicycles, transit and freight, and the results are a mixed bag, suggesting difficult tradeoffs. Alternative 4 gave the best transit access between Magnolia Village and downtown but the worst access for pedestrians and bicycles to existing facilities. None of the options provided good transit access to either of the planned light rail stations.

Added up, Alternative 4 (a new Magnolia Bridge) came out on top, with Alternative 1 (a new Armory Way bridge) close behind.

The environmental analysis looked at the various components of each alternative (several of which are common across multiple alternatives) and their impacts on adjacent land use, natural hazards, and sensitive areas. Again, the results are not surprising: Alternative 3, which is mostly confined to the Interbay area, scores well; Alternative 4, which replaces an existing bridge, did well, and Alternative 1, which builds a new bridge, scored the worst. 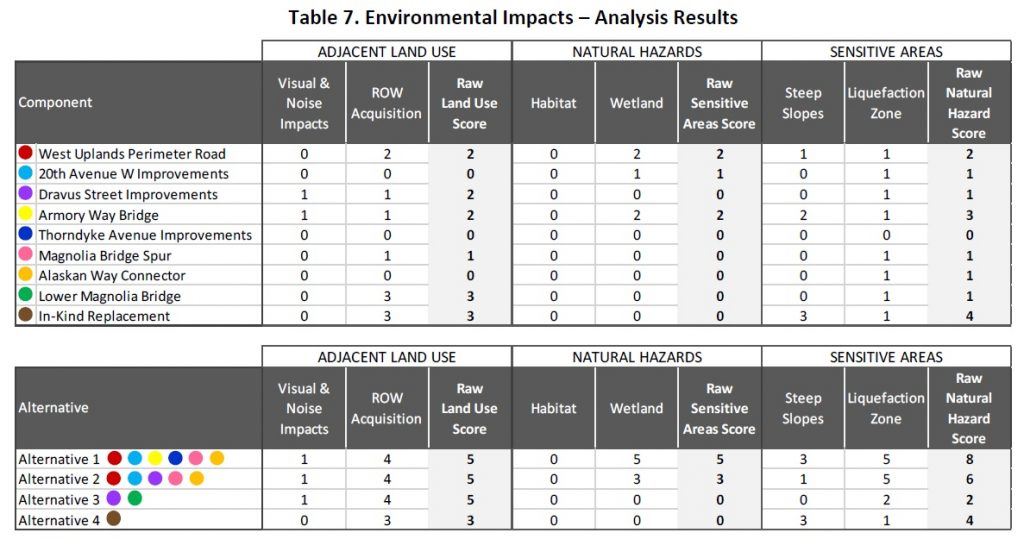 Implementation characteristics, which looked at construction duration and impacts, showed that all the projects would have a duration of 29-35 months, but a wider range in the number of months where there would be a significant impact on traffic, with Alternative 1 (the new Armory Way bridge) having the least impact.

The study also looked at whether projects could be phased to provide some level of traffic benefits along the way versus no change until the project was 100% complete. Alternative 1 provided the most phasing benefit (since it has the most separate pieces), while Alternative 4 provided little.

The study of public preference looked at both support from the general public as well as support from key stakeholders: the Port of Seattle, Sound Transit, and BNSF Railway. Alternative 4 (a new Magnolia Bridge) has strong, widespread support from both, while there was little public support for any of the other alternatives.

And then finally, there’s the total cost of each alternative, incorporating all of the necessary components. The cheapest options (Alternatives 1 and 2) are still expensive, coming in at $256 million; Alternative 4 was by far the most expensive, nearing $400 million. 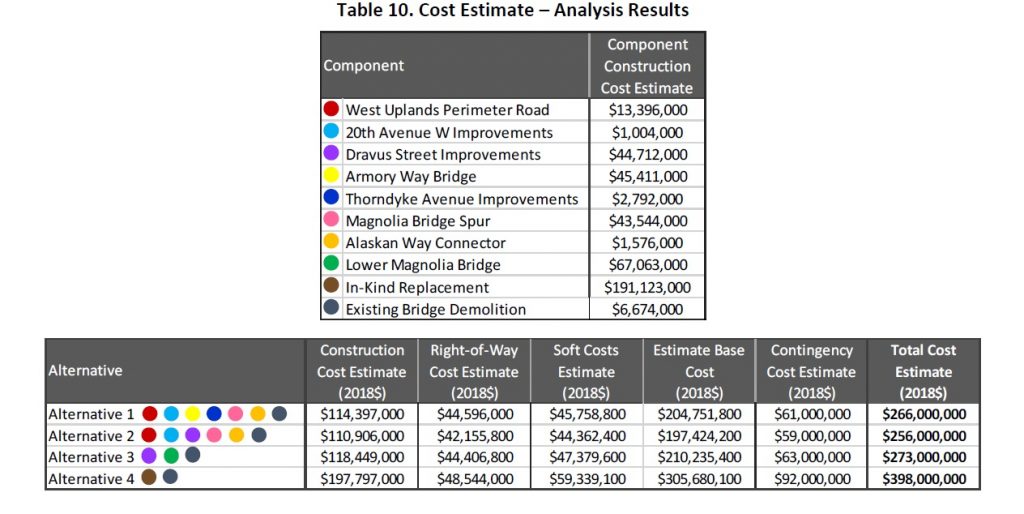 Put all together it’s a complex matrix. Building a new Magnolia Bridge (Alt 4) delivers the most transportation benefits, and has the strongest support and the lease environmental impact, but costs significantly more. Alternative 1 (a new Armory Way bridge) delivers substantial transportation benefits, will deliver benefits along the way, and is far cheaper, but it has the most severe environmental impact and low public support. 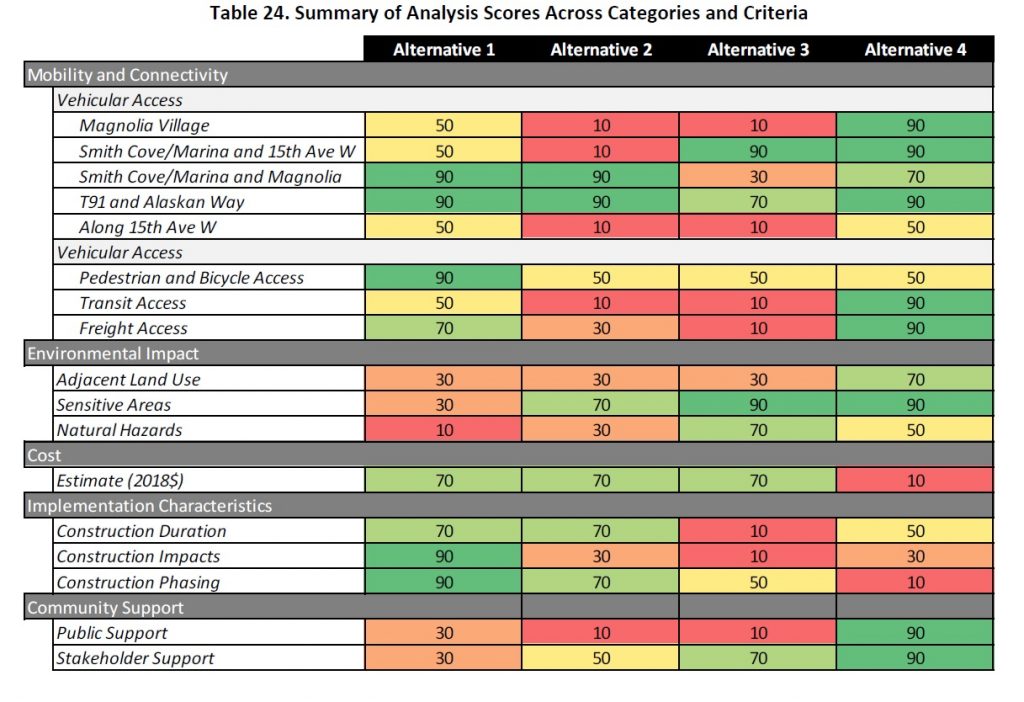 That brings us back to the question of how we weight these five criteria. The original weighting emphasizes cost and mobility, with Alternative 1 coming out on top and the other three fairly even — but none of them clearly surpassing the others by a wide margin. 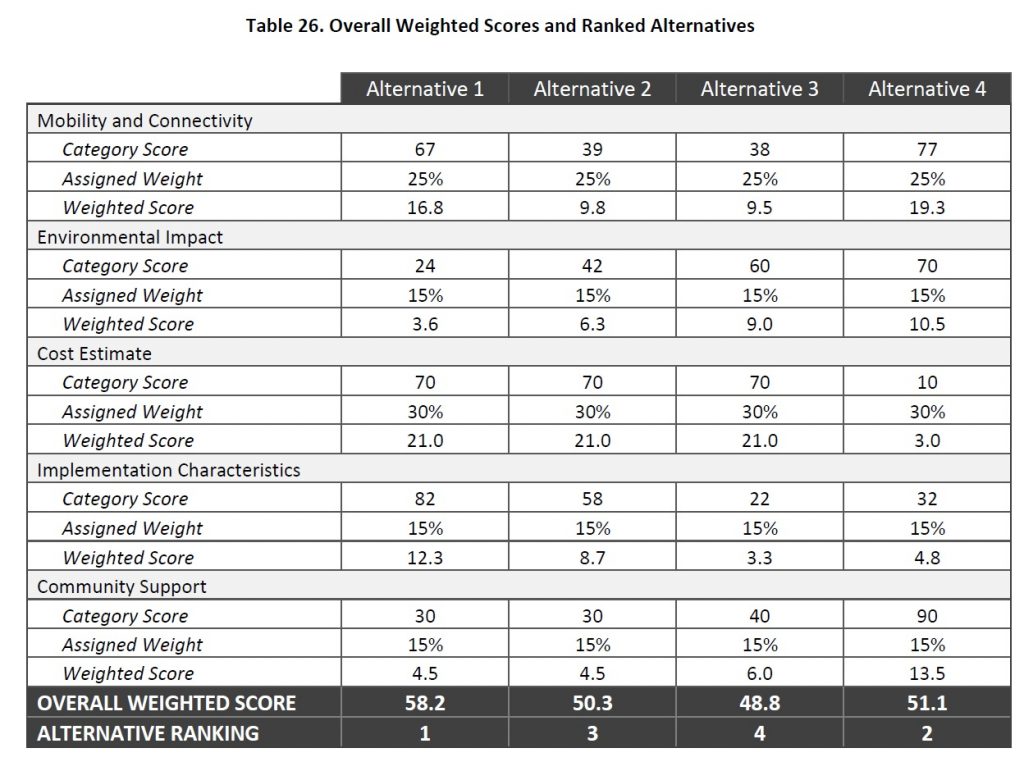 The consultants also ran a sensitivity analysis, in which they changed the weightings to see whether it gave different results. In three of their four alternative scenarios, the top two alternatives remained the same as their original weighting: 1 and 4. 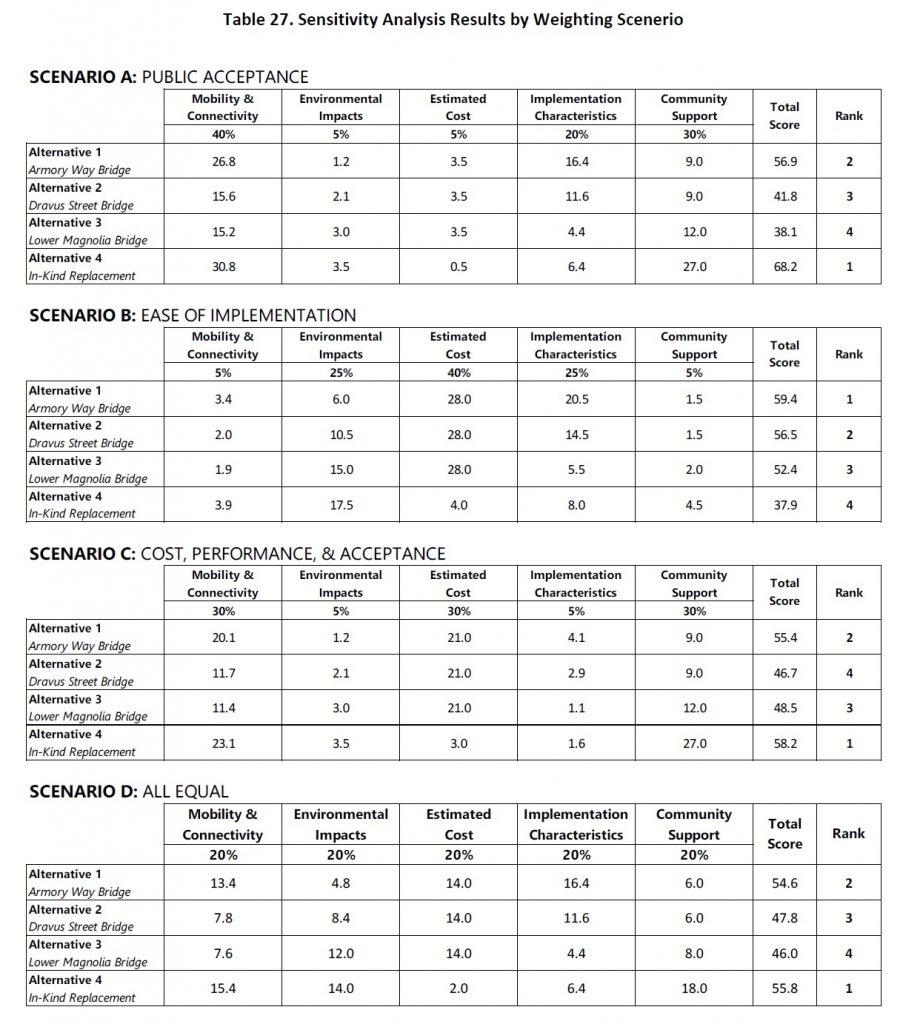 The consultants’ conclusion was that Alternatives 1 and 4 “consistently performed best.” Unfortunately that creates a challenge for policy makers, because even between those two options the results are bipolar: Alternative 4 has by far the most support, but costs much more and provides no benefits until the project is done.  Alternative 1 is much cheaper, can be phased, and will deliver benefits along the way, but lacks public support.

And, of course, no funds have yet been identified to fund any of these options. Assuming federal and state funding won’t cover the full costs (they almost certainly won’t), that presents local officials with two lousy choices: asking taxpayers to cough up more money for a project they strongly support, or asking them to pay less money for one they don’t.

The good news here is that the city actually took the time and effort to evaluate several alternatives, and is now much smarter about the difficult choices that lie ahead.