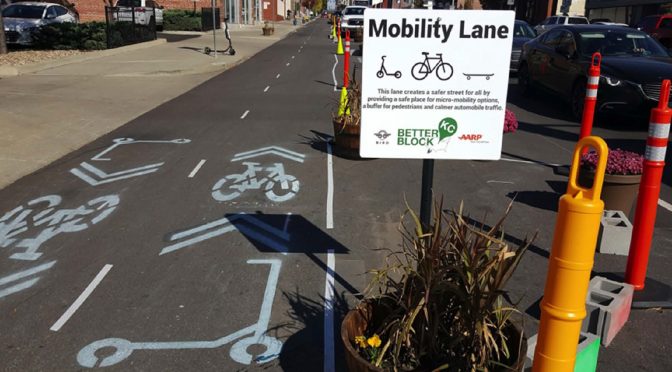 The Council got a briefing this afternoon on a set of emerging mobility technologies. Get ready to change the way you think about streets, sidewalks, and even bike lanes.

Also, expect the city to roll out an e-scooter pilot in the near future.

At the direction of the City Council, SDOT investigated and prepared a report on:

The report and briefing delivered on the first two, and came up short on an integration strategy, though they do lay out plans for an e-scooter share pilot in Seattle.

SDOT intentionally skipped over Uber/Lyft and bike share since they are already here, as well as automated vehicles and delivery drones. But here are the technologies they did look at:

In the past, we’ve handled new mobility form factors, such as bicycles and skateboards, as one-off modifications to the general rule that pedestrians travel on sidewalks and motor vehicles travel on streets: skateboards are either banned or must be ridden on sidewalks, and depending on the circumstances and jurisdiction bicycles may travel on streets, sidewalks, or dedicated bike lanes (sometimes protected ones). The introduction of e-scooters already pushes the boundaries of that model, but introducing this many new mobility options makes it impossible to continue making incremental changes. For better or worse, it’s time to rethink the way we manage the public right-of-way.

We appear to be heading in the direction of expanding bike lanes into what Kansas City is calling “low-intensity travel lanes,” and making them far more ubiquitous, so that many city streets have three kinds of lane in each direction, mainly based upon speed of travel:

Turning bike lanes into more generalized low-intensity travel lanes will be tricky — and expensive, as it will become more imperative that the network of lanes be built out and fully connected. Already today the city is struggling to meet its promises to build out protected bike lanes. Also, in all three types of lanes there will be competition and conflict due to the differing bulk and speed of mobility options. We see this already with bikes and scooters, as well as with scooters and pedestrians. The mix will only make things worse.

Parking for all of these devices will also be an issue, not only because street parking will be one more competitor for right-of-way space, but also because of a lack of clear rules and strict enforcement of where smaller mobility devices can be parked. Just as with travel lanes, parking areas will need to be zoned and shared — and enforced.

And what happens on residential streets where there is no bike/low-intensity lane — and potentially no sidewalk? Which mobility options are allowed, and how fast can they travel?

Here’s a chart that SDOT presented with the current laws:

These, along with questions about safety rules (including helmet laws) and enforcement, are big, complex questions that SDOT doesn’t claim to have the answers to; thus the lack of a strategic plan. It does, however, have a high-level set of guidelines defined that it can use to help it work through specific issues: 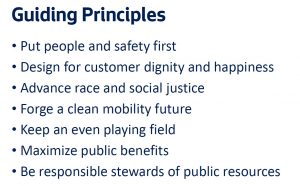 SDOT emphasizes that safety is its top priority (though the critics of its redesign of 35th Avenue would challenge SDOT on that point). It also has collected a set of lessons learned from other cities that are ahead of Seattle, including:

Recognizing that the public right-of-way is the city’s most valuable asset and it must be managed carefully, SDOT said that it is working on a set of design standards.

Of course, the immediate issue and the testing ground for these principles and standards is the e-scooter pilot program that SDOT is currently designing. SDOT said that it is in the very early stages still, and it expects to develop it over the next few months. Once again, Council member O’Brien voiced his impatience at waiting to roll it out, claimed that many Council members supported it, and wanted to know that the Council could do to expedite rollout of an e-scooter pilot “as soon as practically possible to get the pilot out there.”

Despite not being one of the emerging technologies on the agenda, bike sharing did come up today. SDOT shared that there were 2 million bike-share rides in 2018, and through the end of April this year there were already 400,000. O’Brien celebrated that, but also pushed for SDOT to step up on enforcement of bicycle parking so that they aren’t blocking sidewalks and creating obstacles for people with mobility issues. There will be questions of licensing requirements as well, even if only to force users to take classes on proper use of the devices, proper use of the right-of-way, and safety rules and precautions.

To that end, O’Brien also suggested that the SDOT more aggressively convert the current “no parking” curbside areas just in front of stop signs to be bike- and scooter-share parking zones, as he didn’t think they created the same visibility issues at intersections that motor vehicles do. SDOT has piloting bike parking in some of those spots already, but O’Brien pushed hard for the city to lay claim to all of them quickly.

SDOT also noted that the changes required extend beyond reallocating and reconfiguring the right-of-way. State and local laws that determine use of the devices will need to be rewritten (some of them, including certain scooters, are still classified as “toys” that may only be used on the sidewalk), and there will also be implications for the city budget as large amounts of money will need to be allocated to make the necessary changes to the right-of-way.

One issue that didn’t come up is what other technologies might need to be deployed in this brave new world, such as 5G communication networks so that autonomous vehicles can be constantly monitored and shared vehicles can be activated and tracked, and potentially even location beacons embedded in the right of way so that devices can track their own location even in “urban canyons” created by looming skyscrapers where GPS signals don’t reliably reach. As quickly as we might want to rush forward, lack of those kinds of infrastructure investments might be the most significant issue that delays deployment.

Toward the end of the briefing, O’Brien suggested that his bicycle advocacy work over the past 15 years “feels like it might have been a mere warmup to what might be coming” if e-scooters and other new devices capture the imaginations of Seattle residents and a significant fraction of them start to use them for everyday travel.