This morning, the Human Services Department delivered its second-quarter report to the City Council on the Navigation Team. Last fall the Council placed a proviso on the team’s 2019 budget so that it must deliver a report each quarter in order to get the next quarter’s budget released and available to be spent.

The Nav Team has been increasing the amount of metrics it tracks and produces, though quite frankly most of the numbers in the report (for January – March) are not terribly insightful — especially since its regular work was suspended for two weeks during the February winter storm while the team focused on emergency work getting people indoors. There were, however, some interesting parts of today’s conversation that shed light on recent issues with the team.

Here’s the written quarterly report, and the presentation slides used today. And here’s the video on Seattle Channel, in case you want to watch the hour-long presentation and discussion.

As Erica Barnett reported recently, the Nav Team’s work has shifted somewhat this year, away from regular encampment removals that require a 72-hour notice with outreach, and toward immediate removals of encampments that are deemed “obstructions” to the public right-of-way or public health or safety hazards. Today, however, was the first time that the reasons for the shift were fully explained. According to Tiffany Washington, the Human Services Department’s Division Director of Homeless Strategy and Investments, the city is following the agreed-upon rules for encampment cleanups, known as the Multi-Department Administrative Rule or “MDAR”. The MDAR specifies that obstructions and hazards may be cleared immediately, but all other encampment removals require 72-hour posted advance notice, outreach during the 72-hour period to offer services, and a meaningful offer of shelter before the removal takes place.  The shift from 72-hour cleanups to obstruction/hazard cleanups looked suspiciously like an attempt to circumvent the 72-hour rules by broadening the definition of “obstruction” and “hazard” to more encampments. 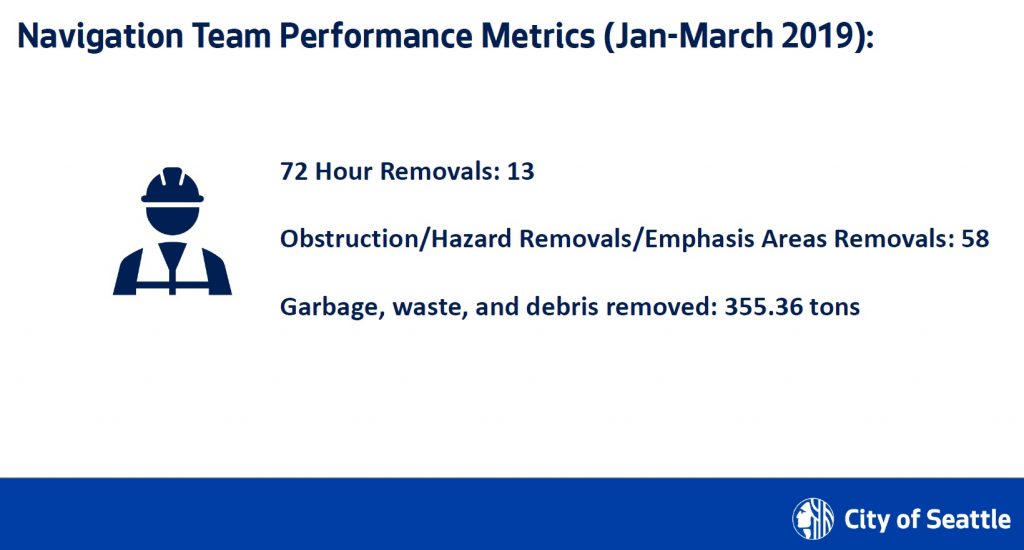 Not so, says Washington. Rather, the Nav Team’s ability to perform 72-hour encampment cleanups is constrained by a lack of availability of shelter beds since the existing shelters and tiny home villages are nearly at capacity. On a typical day, there are 17 open shelter beds in the shelters that the team has exclusive access to refer people to (HSD doesn’t have current data on the number of available beds in other shelters). Because of that, it has instead been clearing obstructions and hazards, which don’t require the city to offer shelter space (though HSD says that it makes offers anyway, and to the best of their knowledge there hasn’t been a time when there were zero beds available and an offer couldn’t be made during an immediate removal). Washington also noted that the overall rate of encampment cleanups has decreased — supporting her contention that the shift in the type of cleanups is because of constraints on 72-hour encampment removals under the MDAR rules.

It was also announced recently that REACH, the outreach provider “embedded” in the Navigation Team, has asked to pull back its involvement. Washington explained that REACH still works with the Navigation Team, and it also has an expanded contract to provide outreach for a number of areas of the city where encampments are frequently found — including some places where encampment removals might be forthcoming. But REACH had specifically asked not to be involved in providing outreach onsite during encampment removals, because of the impact on its credibility with clients (i.e. homeless people). After Council member Sawant jumped on this as an indictment of “sweeps,” Washington further clarified that REACH’s objection was not that they didn’t believe in encampment removals, but because they know that many of their clients have had past traumatizing experiences with the police, and if they see that REACH’s outreach workers have a relationship with the police it might impact their willingness to talk to the outreach workers for fear that their names will be given to the police. HSD decided that was a reasonable request and is respecting it; in response, the Nav Team has hired two “system navigators” to provide referrals to programs, services and shelter during encampment removals.

Council member Herbold reminded Washington that HSD still owes the Council a staffing review for the Navigation Team that specifically evaluates  the value of having uniformed police officers as part of the team, knowing that many homeless people have had past negative experiences with the police.

The insight that the Nav Team’s 72-hour cleanups are constrained by the availability of shelter beds, and the team’s metrics showing that among the available shelters the “enhanced” shelters and “tiny home” villages have much higher success rates for exits from homelessness than “basic” shelters, led to a discussion of efforts to expand the available enhanced shelters and tiny home villages. Council member Sawant pushed hard on why the Mayor hasn’t expanded them more before continuing encampment removals — which is ironic given that last fall Sawant demanded that the basic shelters managed by SHARE/WHEEL be re-funded after HSD cut their funding to focus resources on enhanced shelters. 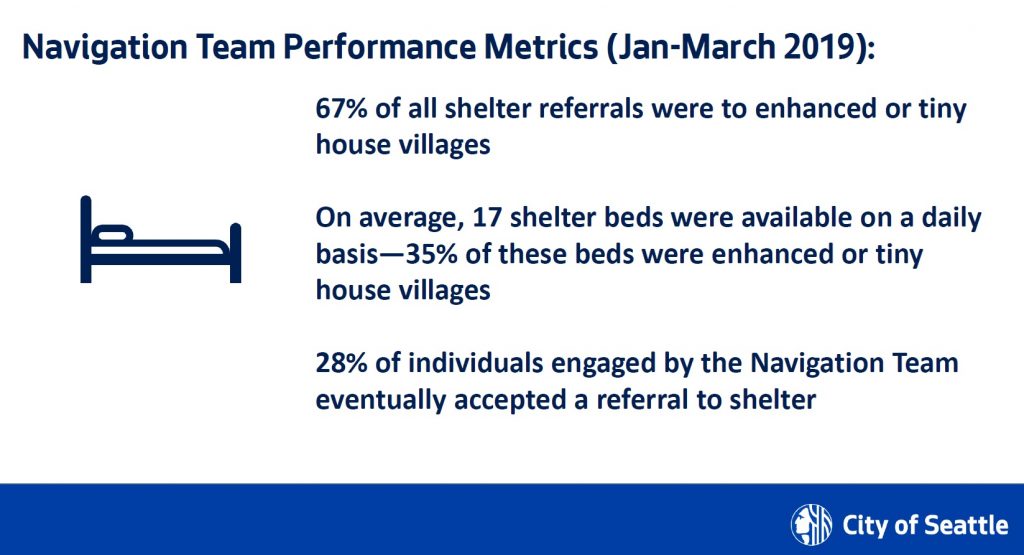 Washington said that she didn’t have a timeline for new shelter space, but her team is working on cost-modeling and actively discussing the issue with the Mayor’s Office. She also noted that as part of last year’s “Path to 500” initiative by the Mayor, HSD pushed existing enhanced shelters to expand their capacity to the maximum extent possible — limiting the easier options this year for further expansion.

The three Council members present, O’Brien, Herbold and Sawant, in general took a critical eye to the Navigation Team’s efforts, with Sawant the most outspoken in her criticism and clearly looking for additional ammunition in her ongoing crusade to “stop the sweeps,” Herbold focusing her criticism on nuts-and-bolts issues, and O’Brien more concerned about the “big picture” of whether the city’s efforts are working.

The Council members also took time to review some of the recommendations from the City Auditor’s review of the Navigation Team, checking in on progress. Other notes from the discussion: