Last Friday, King County Superior Court Judge Patrick Oishi issued a “bench ruling” that invalidated the City Council’s ordinance extending the Pike Place Market Historical District to include the Showbox site, in order to prevent it from being sold to Onni Development and redeveloped into a residential tower. This afternoon the judge issued the written version of his ruling.

Oishi’s written order is short and to the point: he chose to simply sign the proposed order submitted by the plaintiffs, rather than write his own. 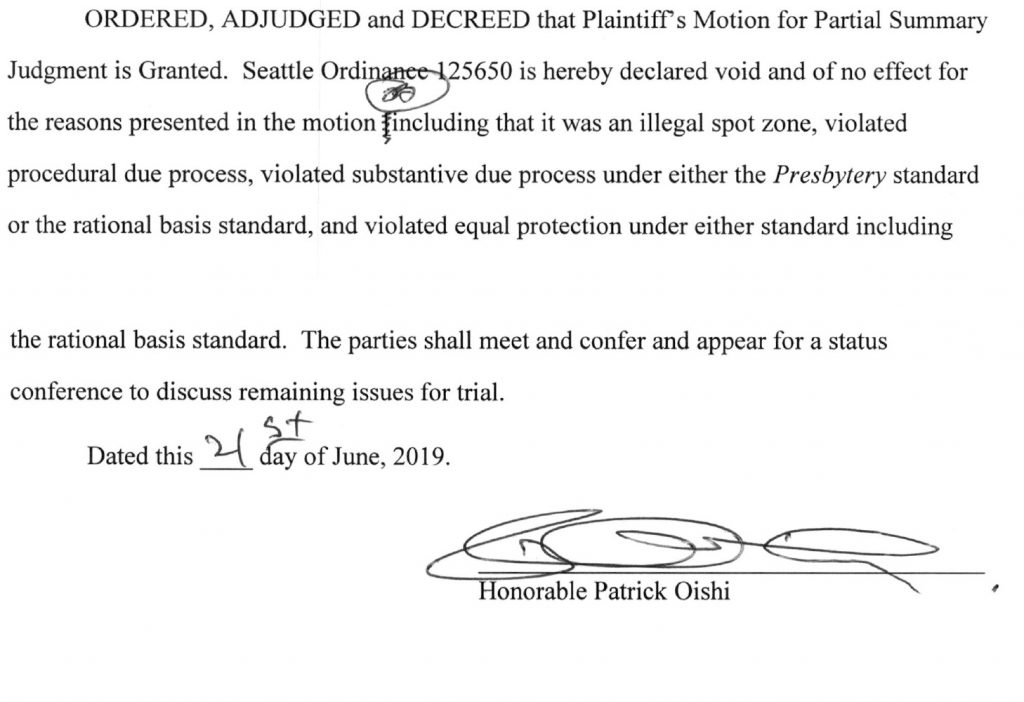 The order reads, “Seattle Ordinance 125650 is hereby declared void and of no effect for the reasons presented in the motion including that it was an illegal spot zone, violated procedural due process, violated substantive due process under either the Presbytery standard or the rational basis standard, and violated equal protection under either standard including the rational basis standard.”

It’s somewhat unusual for a judge not to write their own ruling, laying out the facts and legal determinations in their own words, for a case this big and complex — and especially when neither side holds back in their full-throated argument. But instead Oishi simply points to the plaintiffs’ legal brief as the final word. Because of that, it’s worth walking through that brief to understand what it says.

At a high level, it presents four separate arguments as to why the ordinance is illegal and invalid:

Let’s take them one at a time and look at what the brief says. (remember, now this isn’t just the plaintiffs’ perspective anymore; it’s the judge’s ruling as well, by reference)

It’s an illegal spot zone.  According to case law, a “spot zone” is when one or more lots are marked off for treatment separate from adjoining similar lots, where that treatment either confers special advantages or applies special burdens. Spot zones are heavily frowned upon by courts as abuses of government power. Courts make allowances for small rezones if the circumstances related to the lot(s) have changed since the most recent rezoning action, but if the circumstances remain the same, then that lends more credence to the notion that the rezone is illegal. They have also noted that public opinion alone is not a legitimate basis for a spot rezone.

In the case of the Showbox property:

That makes it clearly an illegal spot-zone.

It violates substantive due process rights. The fourteenth amendment to the US Constitution dictates that states (or their subordinates including cities) may not deprive individuals or life, liberty or property without due process of law. Courts have divided this into “substantive” due process, and “procedural” due process. Substantive due process relates to the reasoning behind the government’s action. Based upon what is being taken away, the law applies one of several different levels of scrutiny to the reasoning, or conversely it gives a certain level of deference to the government. The lowest level of scrutiny/highest level of deference is called “rational basis,” in which a judge allows the action if any rational basis for the action can be conceived and:

Case law has established that people have a fundamental right to “acquire and hold property,” and that there are several fundamental attributes of property ownership, sometimes referred to as a “bundle of sticks” in which infringing any one of the attributes — removing a stick from the bundle — constitutes a property rights violation. The well-established fundamental property attributes include possession, use, enjoyment, disposal (the right to sell or lease it), and “alienation” (the right to exclude others from it).  In Washington state, when the government infringes fundamental property rights, the courts apply a higher level of scrutiny (the Presbytery standard referenced in Judge Oishi’s ruling), asking whether the action:

As an aside, it’s worth noting that the question of what level of scrutiny applies to substantive due process violations in Washington is the subject of the two cases that the city argued in front of the state Supreme Court two weeks ago, and how the court rules in those cases may affect the ultimate outcome of this case as well.

As for whether it is “unduly oppressive,” the brief lists the factors courts consider. From the public’s side:

On the property owner’s side:

Under any reasonable analysis, the ordinance looks extraordinarily burdensome on the property owner. It killed a $41 million sale of the property; it restricts the use to the current one, despite the fact that the property was rezoned two years ago to allow a 440-foot tower; the owner claims that the city sent him a letter prior to the ordinance giving a general “green light” to Onni’s planned redevelopment;  and the Historic District regulations make changing the use difficult.

But the brief also argues that even if the most permissive “rational basis” test applies, the ordinance fails — largely for the reasons spelled out in the spot zone argument.

It violates procedural due process rights. Procedural due process applies to whether the government followed its obligations in how it enacted and applied a law or regulation.  Most notably, that includes notifying the affected person(s) of the pending legislation and providing a meaningful opportunity to respond, present their objections, and influence the outcome before it is enacted. In this case, the owner was not notified in writing of either the committee meeting in which the bill was heard, or the full Council meeting in which is was enacted into law. Further, the public comment period during those two meetings only allotted one minute per speaker, which is insufficient for a “fair” hearing for the property owner.

On top of that, the historic district is an “overlay” over existing zoning, which under Seattle Municipal Code is considered a “quasi-judicial” matter subject to different procedures and requires notice by mail and hearings. Notice and opportunity to be heard are also part of the city’s historic preservation law. The city broke all these rules.

It violates equal protection guarantees.  When a fundamental right is infringed under equal protection analysis, courts apply the highest level of scrutiny, called “strict scrutiny.”  Under that analysis, the burden of proof shifts to the city, where it must show that its action is “necessary to accomplish a compelling state interest.” But the brief points to case law ruling that neither aesthetics nor historic value are “compelling.”

But the brief goes further to argue that the ordinance fails even under the lowest “rational basis” test, because under case law rezones to particular parcels “will be upheld only if there is substantial evidence indicating that the rezone furthers the public welfare and that changed circumstances warranted its passage.” As previously argued, there was no change in circumstances, and it fails to adequately protect either music venues or historic spaces because it only protects one such place — and “there is no rational basis for putting this one property in the District and leaving others out.”  As such, “the Ordinance is the very definition of arbitrary and capricious and thus a violation of the equal protection clause.”

And there’s more. When properties were added to the Pike Place Market Historical District in the 1970s, the brief points out, property owners were given the option to voluntarily agree to the district regulations, or to sell their property to the city at fair market value (most of them sold). But for the Showbox property, the owner was not given that same option. Since “the equal protection clause requires that persons similarly situated with respect to the legitimate purposes of the laws receive like treatment,” the city violated the owner’s equal protection rights by not making the same offer.

With Oishi’s ruling now in place and having adopted the plaintiffs’ legal arguments, the city still has the option to appeal. But in order for the Showbox ordinance to survive, the city must convince the Court of Appeals to overturn all four findings; if any one is affirmed, the ordinance is still dead. If the state Supreme Court rules in its favor in the two cases argued earlier this month, it has a decent chance to overturn the substantive due process ruling. But the other three will be much more difficult; the evidence is compelling, and the case law is clear. Oishi obviously didn’t feel that it was worth his time to write it all up in his own words, and there’s a good chance the appeals court will want to dispose of it quickly as well.

Even if the city doesn’t appeal, the case isn’t quite over, because there are some other issues still left for trial, as well as the issue of damages. After all, the Showbox ordinance killed the deal with Onni  to purchase the property for $41 million. Even if the building finally gets landmark protection in the coming weeks, the city can’t take back what it did and is still liable for its actions. At this point, the best outcome for the city is if a buyer comes forward to purchase the building who is willing to pay market value for it (in return for the owner settling the case with the city) and will maintain its current structure and use. But that won’t be come cheaply, since Roger Forbes now has a court of law on his side with a ruling that the city intentionally and illegally killed his deal.