The CSO program operated in Seattle for thirty-three years until budget cuts caused it to be discontinued in 2004. It placed unarmed, civilian SPD personnel (i.e. not sworn officers) out in the field to conduct community outreach, mediate disputes, and perform other work that connects the community with SPD without requiring the specific skills and authorities of sworn police officers. It was seen as highly successful for dealing with community needs and building trust and connections with SPD, while freeing up sworn officers to focus on other policing activities (though not relieving sworn officers of their responsibilities to also build relationships in communities). The City Council and Mayor allocated funds in the 2018 budget to begin planning for a reintroduction of the program, and this year’s budget allocates $1.3 million, only half of which could be spent until the department submitted a “CSO Program Report” to the Council. That report was submitted in mid-April, along with a “Community Engagement Report” that details how the city sought input from community members about the proposed program.

Based on the community input, SPD has determined three areas of responsibility for the CSO team:

The “Community engagement and education” component is about directly and proactively working to strengthen the relationships between communities and SPD through planning events, assisting and advising on specific community projects, facilitating dialogues with the department, and hosting educational workshops. 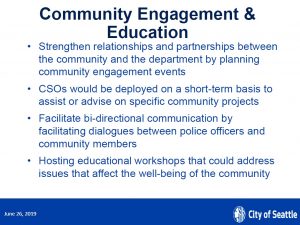 “System navigation” is about reactive follow-up when SPD receives calls for “non-criminal emergency services.” It’s envisioned that the CSOs will be experts in the social services that are available in Seattle — much more so than sworn officers — and can be called in by officers to work with community members to connect them with providers for a wide range of social services. That also includes mediating non-violent disputes in the community, including landlord-tenant disputes. 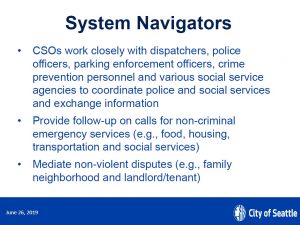 “Youth services and diversion” as a focus for the CSO program came specifically out of the community conversations. The intent is to have CSOs develop youth programming, make social service referrals for youths, connect youth in the criminal justice system with appropriate services, engage with gang and youth violence prevention programs. 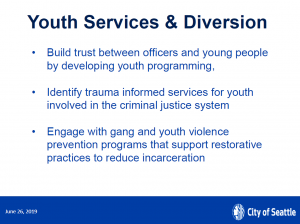 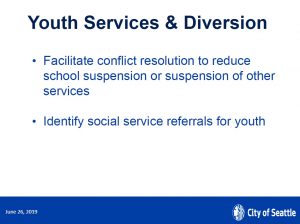 The current plan is to hire ten CSOs and two CSO supervisors, who will report to an SPD sergeant in the Collaborative Policing Bureau.  Those CSOs and supervisors will initially be divided into two squads, each of which will work five days a week. In an interview this afternoon, Diaz explained to me that the squads’ shifts will be staggered, and probably overlapping, to cover day and evening hours six days a week; the exact days and hours have not yet been selected, but he said it might look like one squad working Monday through Friday 9-5, and squad 2 working Tuesday through Saturday 11-8. So for those six days, there would be either 5 or 10 CSOs on duty at any given time during the day and early evening.

CSOs would have a uniform, but it would be clearly distinct from sworn officers. Their vehicles would also be distinguishable from traditional police cars. 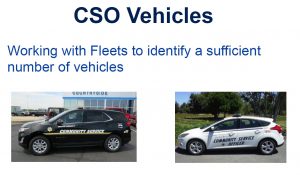 CSOs would get about 200 hours of training (compared to the 800 that a sworn officer receives), with emphasis on social work, de-escalation, conflict resolution and mediation, and crisis intervention. 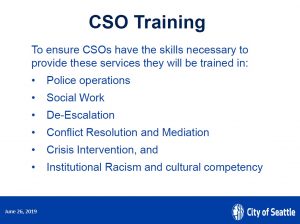 The exact training program is still under development; Diaz said this morning that he expects half of it will be prior to beginning work in the field, and the rest will be on-the-job. Diaz said that the department is very focused on getting the training right, and that is causing them to plan a pilot deployment that is different in some ways from their intended long-term plan. For instance, while the eventual plan is to assign CSOs to geographic areas of the city in order to facilitate building deeper connections with communities,  initially the team will be centrally dispatched across the city while the department learns what skills and tools are really required in the job. “As we build this program,” Diaz said, “we need to be flexible and nimble.” Diaz didn’t know exactly how long that initial period might be, but estimated “a couple of months.” He also pointed out that the original CSO team had an expert in landlord-tenant disputes who was deployed across the city, and he wanted to maintain the flexibility to hire in CSOs into the same sort of city-wide expert role if the need is there.

There is some good news on the hiring front: in the month that the 12 CSO positions were posted, the department received over 300 applications. Diaz cautioned that the interview, background check, hiring and training process will still take months: he said that under an aggressive schedule it could be rolled out in October, but realistically it might take into December or the early part of 2020.

The Community Engagement Report highlighted several other recommendations from the community on factors that will influence the success of the program. Among them:

Council members Gonzalez, Herbold and Pacheco were very excited by the proposal, and enthusiastically voted to lift the spending restriction so implementation can move forward. That bill goes before the full Council next Monday for final approval.

Noting that the CSO program is a top priority for the Council, Gonzalez emphasized that collecting accurate metrics on the program as it rolls out will be important for planning to scale it up in future years. “My suspicion,” she said, “is that this will be a wildly popular program.”