This morning, the Council passed out of committee an ordinance that would require the Human Services Department to build in annual inflation adjustments into its human-services contracts.

The annual increase is tied to the Bureau of Labor Statistics’ Consumer Price Index for Urban Wage Earners and Clerical Workers (CPI-W) for the Seattle-Tacoma-Bellevue area. Several indexes were considered, and they largely don’t differ much, but this one was believed to best match HSD contractors’ employees. In 2020, it’s predicted to cost HSD $3.98 million to make the adjustment on its existing contracts.

The requirement doesn’t apply to:

There has been much said and written lately about the poor wages at many human-services providers in Seattle and around the country, and how it leads to high attrition rates — and often employees who are one tiny step away from qualifying from the very services they provide. High turnover at human services providers has been identified as a key obstacle to improving the success rate for programs, especially those requiring long-term case managers to work with people in need.

The bill, however, isn’t perfect. For one, it doesn’t require that the providers use the increases to give their employees raises; they could use the money to pay for other needs (including utility bills that also rise over time). Council President Harrell took issue with that point in today’s deliberations, and said that he would be working on an amendment to address that issue before the Council takes it final vote on the bill.

The bill also only applies to HSD contracts, which leaves out many other service providers working with other city departments (including the Office of Housing, the Department of Neighborhoods, and the Office of Economic Development) with similar issues.

And Council member Bagshaw noted that the annual increases are disconnected from the city’s revenue growth, so even in recession years where city revenues decline (such as 2009- 2011) the city would still be on the hook to provide an inflationary increase tied to CPI-W. 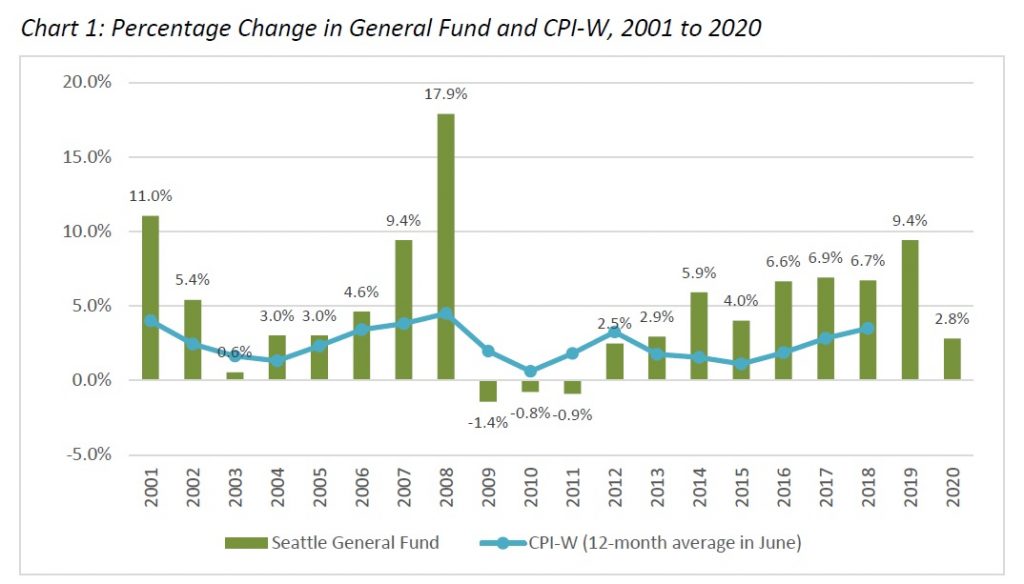 Bagshaw introduced an amendment that would have capped the required increase at the percentage increase in the city’s General Fund revenue stream, while still allowing the Council to opt to increase it further as it deems necessary and can find the funding to back it. However, she got little support from her colleagues and withdrew her amendment.

Most of the HSD contract funding comes from the city’s General Fund, which means that volatility will be a risk going forward (though the city does have a “rainy day fund” to cushion sudden drops in general fund revenues).

The 2019 budget included a 2% increase for all HSD contracts, and the endorsed 2020 budget included a 2% increase for only the  General Fund contracts. Under the new bill, the required increase for 2020 would be 2.9% and would apply to all HSD contracts, for a total increase of $2.69 million — $758,000 more than what’s currently in the endorsed budget.  Projecting out over the next ten years, the required annual adjustment will increase the cost of the current HSD contracts by about $36 million if local inflation remains at the ten-year average of 2.4%. The increase rises to $44.5 million if the current 2.9% inflation rate becomes the “new normal.” 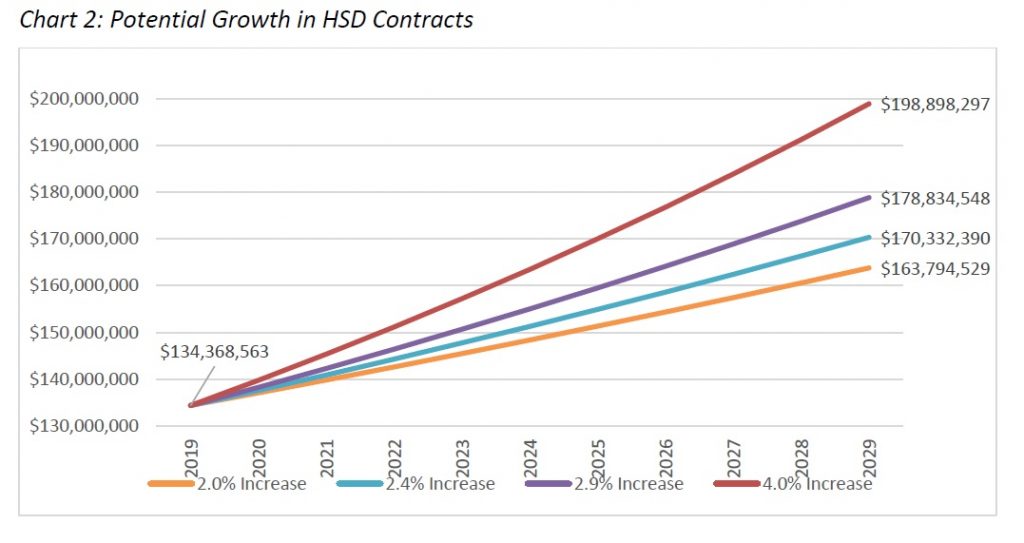 The bill passed unanimously out of committee after two minor amendments, and will come up for final approval on Monday.