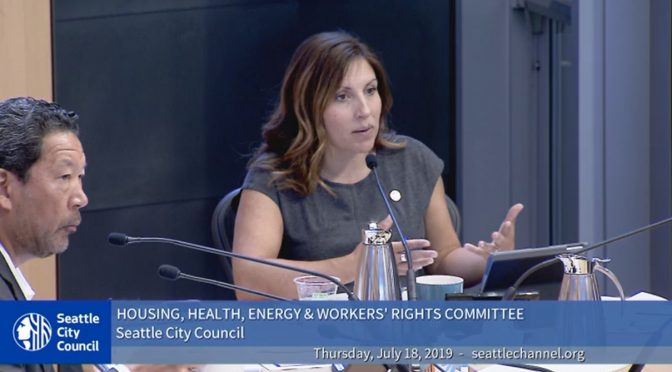 This morning, the City Council passed out of committee the “notice of intent” tenant protection ordinance. But they heavily amended it first, changing the nature of the bill and raising several issues as to its legality.

The bill in its original form was fairly simple: the owner of a multi-family rental property must post notice of intent to sell the property 90 days in advance of signing an agreement to do so. That would give tenants a heads-up as to change of ownership, and a long lead time to prepare for a potential change in use and the need to find a new place to live. It would also potentially provide an opportunity for one or more tenants, the Office of Housing (OH), the Seattle Housing Authority (SHA), or a nonprofit affordable housing provider to submit their own bid to buy the property. It’s not a perfect bill; property owners argued that 90 days is too long to have to sit on an offer, and in those 90 days several units might become vacant which might substantially change the prospects of selling the property in the first place.

The Council took that to heart, and in their rewrite of the bill they threaded the needle of trying to facilitate tenants’ ability to pull together a bid to buy the property while not introducing unnecessary delays.

The “notice of intent to sell” requirement is still in the bill, for any property with 2 or more rental units in which at least one is offered for rent at a price that is affordable to someone earning 80% of the Annual Median Income (AMI). But what happens after that changes, and the timing is tiered depending upon the size of the property.

For properties with 2-4 units, once the notice is posted then there is a 15-day window for one or more tenants, the OH, SHA, or a nonprofit to notify the owner of their interest in buying the property. If no one notifies the owner within 15 days, the owner is free to sell the property immediately — no need to wait out the full 90 days.

After notifying the owner of their interest, the potential buyer has 15 days to submit written documentation showing that they are qualified (i.e. have the financial resources) to buy the property. Again, if no one completes that step within the 15 days, the owner can sell immediately.

Within 30 days of notifying the owner of their interest,  potential buyers (tenants, OH, SHA, or nonprofits) must submit an offer to buy the property. Once again, if no offers are received in that time period the owner may list or sell the property immediately.

For properties with 5 or more units, the structure is similar but the deadlines are later, taking into consideration that it would take longer to arrange for financing and pull together an offer. Altogether it could take up to 90 days to get fully clear of the requirements in the ordinance.

So here’s the very troublesome part, that applies to all buildings regardless of size: assuming the owner receives an offer from tenants, the OH, the SHA, or a nonprofit, then the owner may only move forward to list, advertise or sell the property to a third party “if the owner and potential buyer cannot agree to the purchase of the building.”  That is essentially granting a “right of first refusal” to the four classes of potential buyers in the ordinance. It’s a little squishy because the ordinance says nothing about the terms of such a deal or how they would need to be negotiated, but in practice it’s still a right of first refusal because if the owner declined an offer from a group of tenants and then accepted an offer with exactly the same terms from a third party, the owner would be open to accusations of negotiating in bad faith with the tenants, or of discrimination.

There is a substantial amount of federal and state case law supporting the notion that a right of first refusal to buy a property is a fundamental right of property ownership that is protected by the Constitution (both US and Washington). Courts have been clear that property owners have the right to possess, use and dispose of their property, and disposal includes selling it to whomever they choose. Property owners can give away or sell a right of first refusal on their property, but the government can’t take it away without compensating the owner and following due process.

Taking the right of refusal and giving it to the Office of Housing or the Seattle Housing Authority, both government institutions, is an act of “eminent domain,” which the city can do — again, if it meets the compensation and due process requirements, which in this case it hasn’t. But taking the right of first refusal and giving it to the tenants, or to a nonprofit affordable housing provider — both private entities — is prohibited by the Washington State Constitution: (Article I, Section 16)

EMINENT DOMAIN.   Private property shall not be taken for private use, except for private ways of necessity, and for drains, flumes, or ditches on or across the lands of others for agricultural, domestic, or sanitary purposes.   No private property shall be taken or damaged for public or private use without just compensation having been first made, or paid into court for the owner, and no right-of-way shall be appropriated to the use of any corporation other than municipal until full compensation therefor be first made in money, or ascertained and paid into court for the owner, irrespective of any benefit from any improvement proposed by such corporation, which compensation shall be ascertained by a jury, unless a jury be waived, as in other civil cases in courts of record, in the manner prescribed by law.   Whenever an attempt is made to take private property for a use alleged to be public, the question whether the contemplated use be really public shall be a judicial question, and determined as such, without regard to any legislative assertion that the use is public:  Provided, That the taking of private property by the state for land reclamation and settlement purposes is hereby declared to be for public use.

The city knows this all too well. The precedent for this is Manufactured Housing Association vs. State of Washington, a Washington State Supreme Court ruling from 2000 in which the court invalidated a state law that gave mobile home tenants the right of first refusal to buy the mobile home park where their homes were situated. And this case is central to the legal challenge to the city’s “First in Time” tenant protection ordinance that is awaiting a ruling from the state Supreme Court. The salient differences between the state law in question in Manufactured Housing and the city’s “notice of intent” bill are tiny; the biggest one is the vague language around what it means for the potential buyer and the owner to not be able to agree on a purchase. And the only way to distinguish that from a right of first refusal is if the city allows owners to decline an offer for any reason (or for no reason) — giving all the power back to the owners and rendering the mechanism in the bill toothless. Courts aren’t allowed to interpret laws such that parts of a law are meaningless or superfluous, so they are unlikely to interpret this ordinance so that owners are not required to consider an offer from one of the favored parties and negotiate in good faith. Unless the ordinance says that they can — and it doesn’t. Not only is it presumed that the owner must negotiate with the favored potential buyer, but they must do so before listing or advertising the property — and as such the owner is deprived of the ability to accurately gauge the market value of the property through competitive bids; that further reinforces the notion that this is a “right of first refusal.”

So what began as a bill requiring rental property owners to provide a 90-day notice to their tenants before selling the property has morphed into a government taking of a protected property right and almost certainly another lawsuit. The intent is a great one: give tenants protection from a sudden change in building ownership, and create opportunities for the preservation of  affordable rental housing. Council member Mosqueda, the bill’s sponsor, should be commended for that. But the final bill is destined to spend several years in court before it ever takes effect — in the unlikely event that it actually survives the legal challenges it will inevitably draw.