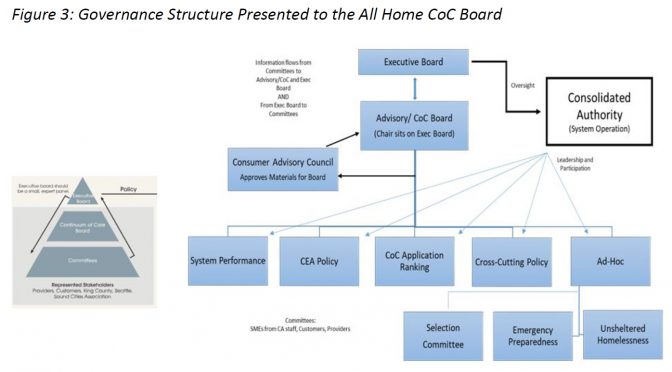 According to a briefing delivered to the City Council yesterday, key questions are now starting to be answered in the long process of devising a regional governance structure for the response to the homelessness crisis.

Tess Colby, the Mayor’s go-to- person for all theings related to the process of establishing the regional governance structure, walked Council members through the recommendations coming out of the development process — which, in living up to the trademark “Seattle process,” has involved months of gathering input from all stakeholders both at the city and county level.

Council member Mosqueda, one of the Council members of the city’s “client group” tracking the process (the County Council has a parallel one), began the briefing by noting that no decisions had been made yet, but that recommendations were now surfacing. She stressed that officials were committed to “transformational change,” reductions in duplicative programs, streamlining services, and identifying the right metrics and indicators for determining success. “No one wants to move the deck chairs around,” she said.

Colby outlined the procedural steps that must be followed to stand up the new organizational structure. First, the city and county need to enter into an interlocal agreement (ILA) on their respective contributions to the new organization. Second, King County will pass a charter that does the legal work of establishing a new Public Development Authority as the basis of the new org. Once that is done, the City of Seattle, King County, and any other local jurisdictions that wish to join will sign ILA’s directly with the new PDA.

Colby outlined the key aspects of the ILA between the city and county:

The city and county have come to a tentative agreement (pending approval of their respective legislative arms) on the existing functions that will transfer over, and those that will remain in the existing departments:

In parallel, a Regional Action Plan is being formulated by CSH, a non-profit organization. That, too, is deep in the “Seattle process” of gathering extensive input from all stakeholders. The RAP is intended to lay out short-, medium- and long-term goals, milestones and metrics for the new organization around “action-oriented solutions.” It is also expected to identify who is accountable for meeting the goals, milestones and metrics, and to provide recommendations on sequencing of the goals. The team developing the RAP is also working on cost estimates, which should inform the negotiations on the initial budget for the new organization.

According to the timeline (which according to Colby and Mosqueda is still somewhat in flux), the “client group” of Council members will receive the draft ILA, charter, HR plan, and RAP over the next three weeks, with a potential ordinance adopting them as early as mid-September. This runs up against the start of the Council’s fall budget process, though it will be critical for the decisions to be made before then so as to inform next year’s budget.

Council member Bagshaw ended the briefing by reminded everyone why this is now being pursued on an “expedited” schedule: because she and several of her colleagues leave the Council at the end of the year; they want to see it move forward — and not risk losing momentum in the transition to a new Council with perhaps different priorities.