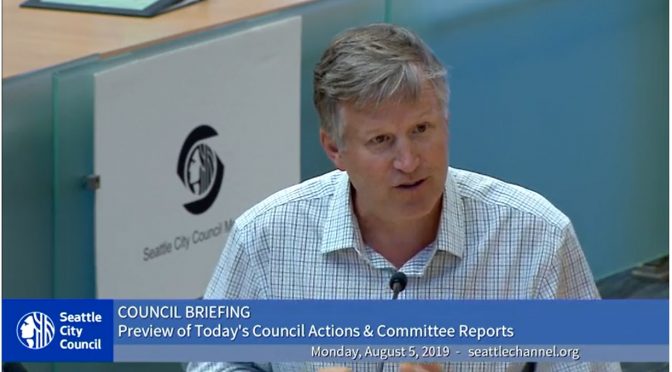 Earlier this year, Rep. Alexandria Ocasio-Cortez introduced a resolution in the House of Representatives “recognizing the duty of the federal government to create a Green New Deal.”  It hasn’t gone anywhere, but it started a conversation about how to address the looming climate crisis while also creating new economic opportunities.

Activists, understanding that the current political reality of Washington D.C. means that federal action is unlikely anytime soon, have begun to focus their efforts instead on local actions in cities with progressive political leadership — Seattle being one of those cities. In June, the Council signed a letter expressing their conceptual support for a Green New Deal. More recently, a group of activists representing Got Green, Mazaska Talks, and the Sierra Club presented to Council member O’Brien’s Sustainability and Transportation Committee on a Seattle version of a Green New Deal.

O’Brien has taken up the charge and is moving forward with legislation. This week, he introduced a resolution laying out the agenda for a Green New Deal for Seattle, along with an ordinance creating a Green New Deal Oversight Board. Let’s look at what they say. 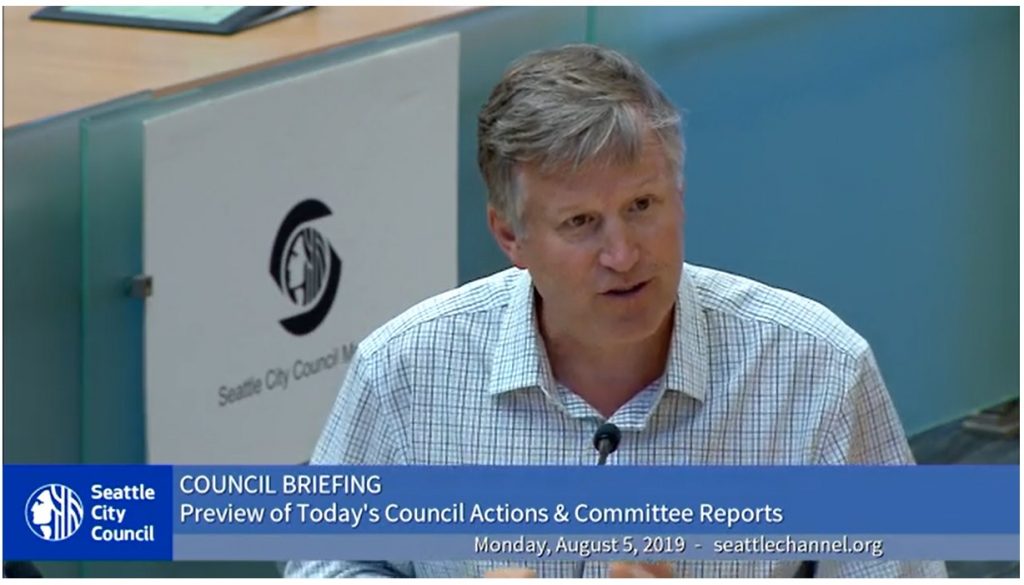 If this sounds familiar, it should. The Green New Deal resolution is a restatement of the broad policy agenda of the progressive majority on the City Council. To that end, it’s both a sweeping document (longer than the federal Green New Deal resolution, as Council member Mosqueda pointed out this morning) and a document that contains little that is new or unfamiliar to those who follow City Hall closely. It contains a long laundry list of initiatives across seven categories:

On the “process” side, it emphasizes centering vulnerable and “frontline” communities who are at risk of falling farther behind in a major economic transition: “Black, Indigenous, and other people of color, immigrants and refugees, low and no income people, houseless people, disabled people, LGBTQ+ people, youth, vulnerable elders, and people who work in outdoor occupations.” It also commits to exploring the creation of “Free, Prior and Informed consent policies” with federally recognized tribal nations.

As far as the initiatives go, the list is lengthy, and includes:

(yes, it’s all in there; read it yourself)

There are some obvious problems with this:

O’Brien’s Green New Deal ordinance directs the Office of Sustainability and Environment to establish a sixteen-member Green New Deal Oversight Board, “to provide recommendations on the design and modifications of policies, programs and projects related to the Green New Deal for Seattle, and monitor progress in meeting intended outcomes and goals.” True to the resolution’s stated goal of centering the most impacted and vulnerable communities, the Board would consist of:

Missing from that list: representatives from industries and businesses that will be required to make substantial changes, including transportation, construction, and freight. By no means should industry representatives have majority control over the Board, but having no representation at all ensures a disconnect between the city and a set of businesses whose involvement will be critical to the success of the Green New Deal. That’s a recipe for a repeat of the “head tax” debacle.

There is also little discussion as to how this new Board will interact with the existing Environmental Justice Committee, other than a brief mention in the ordinance that they should “coordinate their efforts.”

The ordinance also requires the Office of Sustainability and Environment to convene an Inter-departmental Team to drive the Green New Deal, to support the creation of plans, targets and metrics for all city departments. All city departments will be required to deliver their climate plans to the City Council by July 1, 2020, and provide annual progress reports in the following years.

O’Brien hopes to vote the Green New Deal resolution out of committee tomorrow, with a first discussion of the ordinance tomorrow as well.