This morning, Mayor Durkan announced that the city has agreed to terms with Alexandria Real Estate Equities to purchase the Mercer Megablock property in South Lake Union, along with the adjacent city-owned property at 615 Dexter Avenue N. The deal will net the city $143 million in cash, plus a package of additional public benefits that together the city estimates will total somewhere between $275 – $305 million.

Here is my post from last year with background on the Mercer Megablock site. 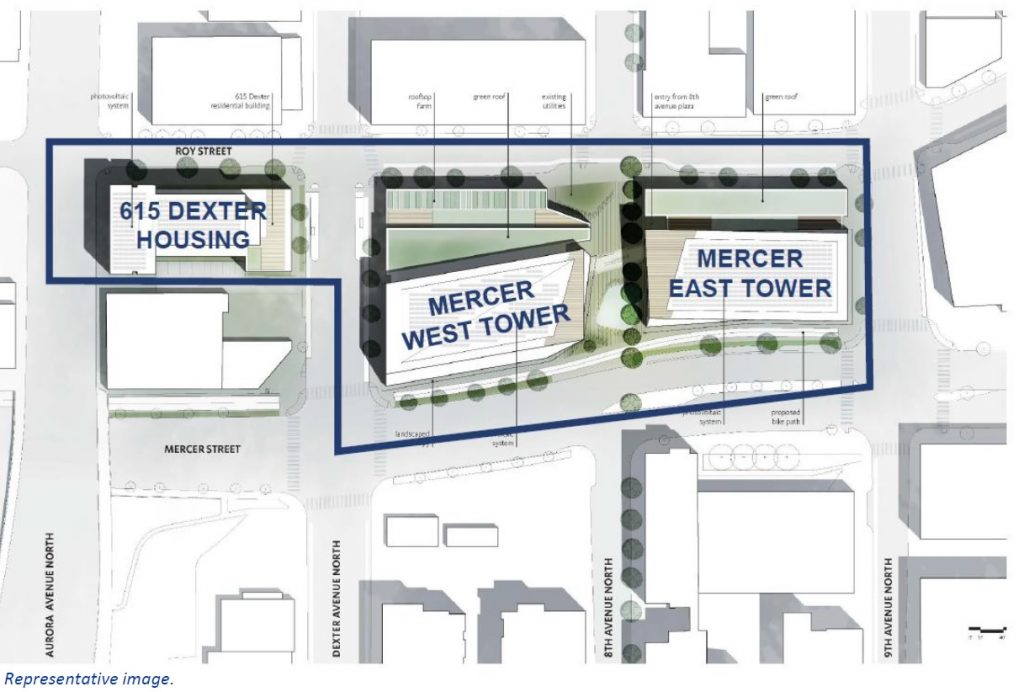 Alexandria Real Estate Equities is a publicly-traded real estate development company specializing in life-sciences buildings and campuses — a good fit for South Lake Union biotech community. The company is valued at approximately $16.4 billion dollars. Earlier this summer it completed an additional public stock offering, raising about $640 million in funds which it intends to use for acquisition and development of properties such as the Mercer Megablock. According to its SEC filings it has about $16 billion in assets (nearly all property), and about $7.6 billion in debt and other liabilities — making Alexandria a reasonably stable, well-financed real estate company with a relatively low level of debt, a good partner for the city on a project like this.

According to Steven Shain, the city’s lead negotiator, six responsive bids were received for the RFP it sent out last year. When the city subsequently asked the six bidders for their best and final offers last December, Alexandria’s rose above the rest with a price increase of almost 40%.

Here is what the city is getting from Alexandria as part of the deal: 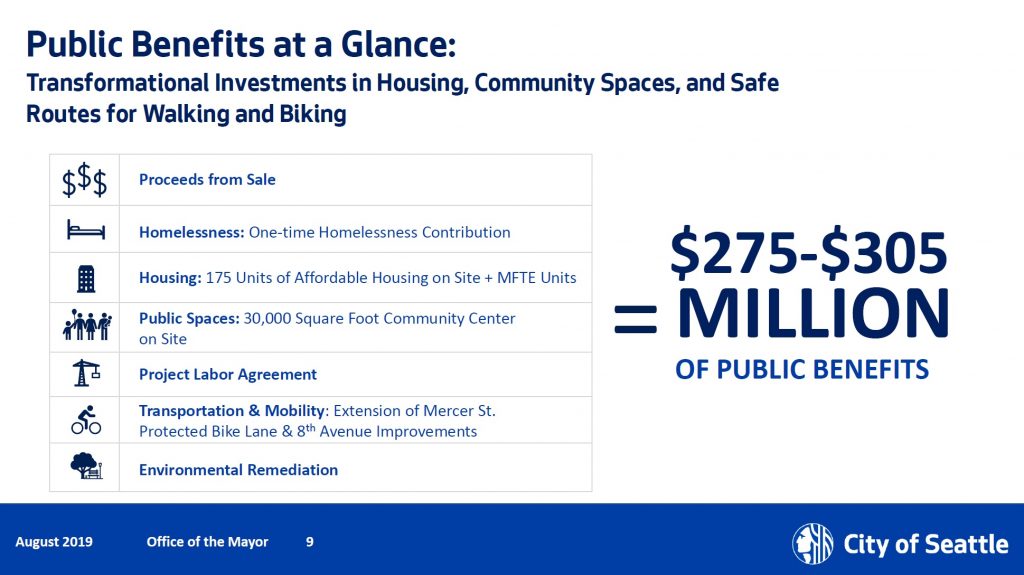 While it is not yet written in stone, the expectation given Alexandria’s submitted bid is that it will build out housing on the 615 Dexter Avenue lot, and a life sciences campus of up to 1 million square feet on the Mercer Megablock. 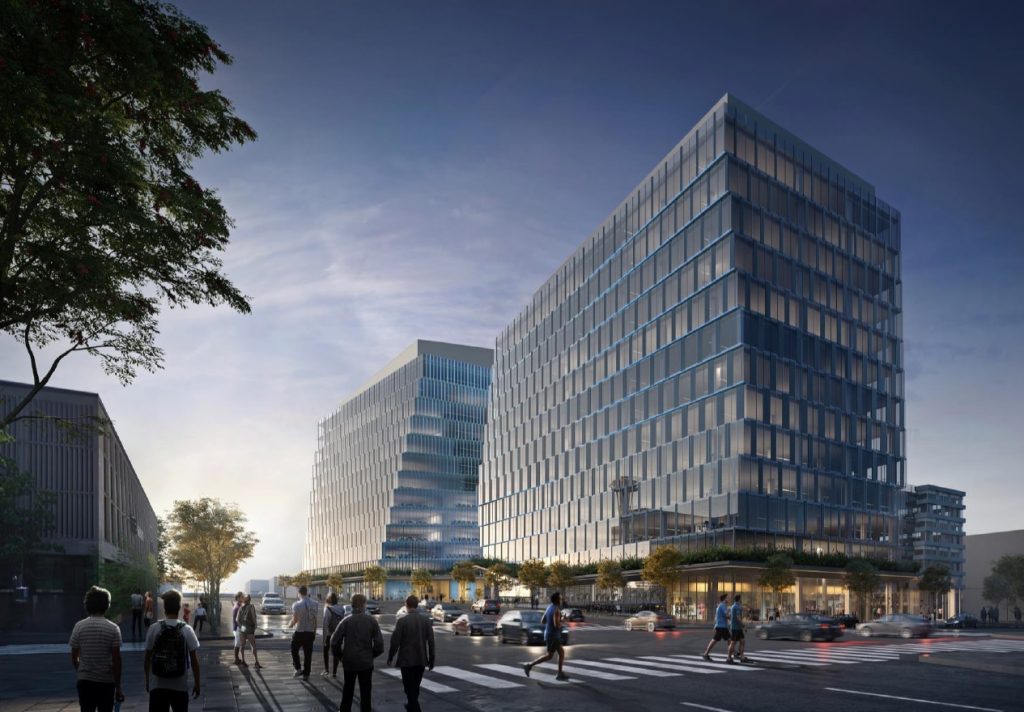 The housing project would contain the promised 175 affordable housing units, plus up to 190 additional market-rate units. Because Alexandria is not using public subsidies, there are few restrictions on how it may organize the units within the building, and according to the city it is looking at blending all of the units together into a mixed-income development rather than separating them out (which is often required when using government funding). Here’s Alexandria’s conceptual design for the Dexter housing project: 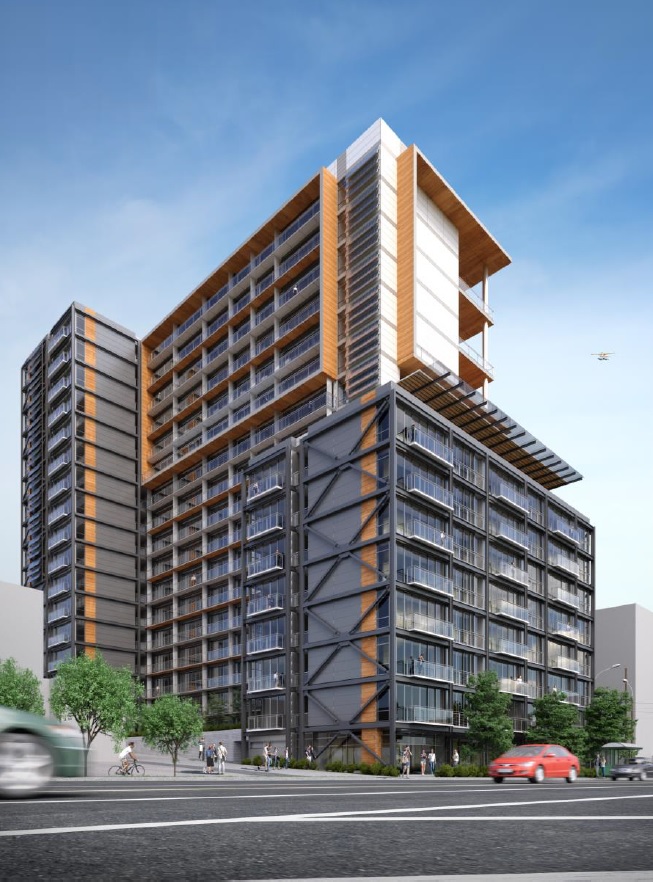 So how will the city spend its $143.5 million windfall? That’s complicated. First, it’s already spent $29.1 million of it, through four separate instances of borrowing against it internally to cover other needs. Also, part of the Mercer Megablock property was originally purchased for SDOT with revenues from the commercial parking tax and the gasoline tax, at least $50 million of the revenues must be re-invested in transportation uses — though some of the internal loans qualify as transportation uses, as does $1.5 million in transaction costs associated with the sale of the property. The Council, on its part, has made it clear that its priority for the sale proceeds is investments in affordable housing, so the Mayor’s proposed spending plan apportions another $25.9 million for transportation — pushing it just over the $50 million threshold — and the remaining $78.2 million for housing.

The housing investments are directed toward five programs:

The $25.9 million in new transportation investments would go to two places. The first $16.7 million would be invested in multi-modal projects, with specific details to be worked out in the 2020 budget this fall. The remaining $9.2 million would “make whole” a shortfall in commercial parking tax revenues in 2018; the city expected about 4% growth over 2017, but instead revenues were flat. As a side note, the City Budget Office noted that commercial parking taxes are up about 3% in the first quarter of 2019, despite the “Seattle Squeeze” and the February winter storm. Go figure.

It’s yet to be seen how the City Council responds to the Mayor’s proposal. While a lot of money is going into housing, most of it is indirect and will result in few housing units immediately being built.  That said, it is addressing some of the biggest pain points in the process of working with partners to build housing, such as land acquisition and making financing options available to low- and middle-income residents.

Next Friday, August 16, the Sustainability and Transportation Committee will receive a detailed briefing on the deal and the Mayor’s proposed spending plan, setting up the Council to approve the plan in mid September. that would allow the purchase agreement with Alexandria to be finalized by the end of the year. Since there is known contamination on the site, the state Department of Ecology must issue a Prospective Purchaser Consent Decree to allow the sale to go forward. That would hopefully happen in early 2020, at which point the deal would officially close and Alexandria could move forward with construction.