Yesterday, the City Council voted out of committee a bill authorizing an additional $9 million to continue design and planning for the controversial Center City Connector streetcar. It now goes to the full Council for final approval. 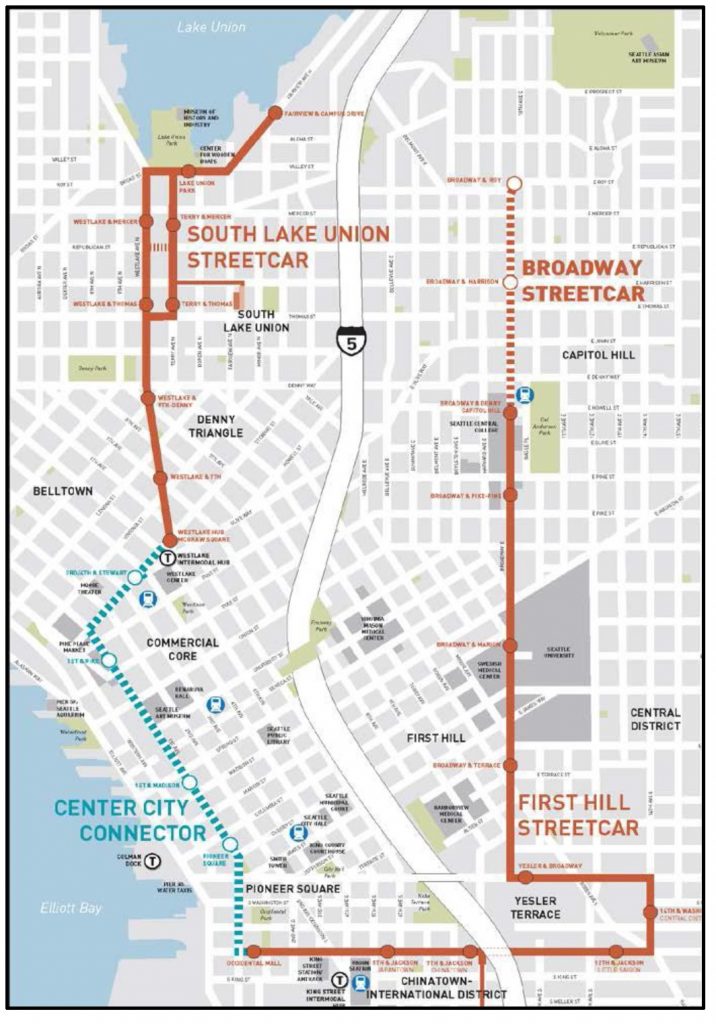 The dollars will be used to hire a new contractor to advance the design to the 30% complete milestone, as well as complete a structural assessment of the Jackson Street bridges, an updated risk assessment for the project, and updated schedules and cost estimates. 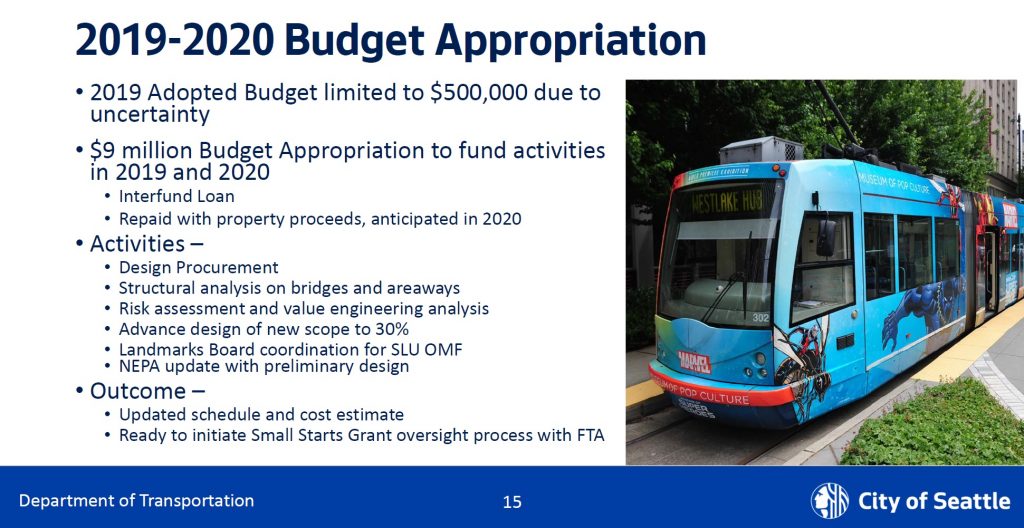 The city recently released its semi-annual operations report for the two existing streetcar lines on First Hill and South Lake Union. The proposed Center City Connector project would connect those two lines into a single continuous line on a hairpin route with ends in South Lake Union and Capitol Hill.

The operations report gave very different results for the two lines. Ridership increased by 31% last year on the First Hill streetcar, while it dropped 4% on the South Lake Union line. Overall ridership has been lagging projections for several years, despite being regularly revised down. Yesterday SDOT Director Sam Zimbabwe said that in 2018 the department recalibrated its ridership estimates using the Federal Transit Authority’s STOPS model which is modeled based on real-world data from fixed-track transit systems in 15 U.S. cities. Zimbabwe said that so far in 2019 the streetcars are tracking closely to the recalibrated projection of 1.73 million annual rides. 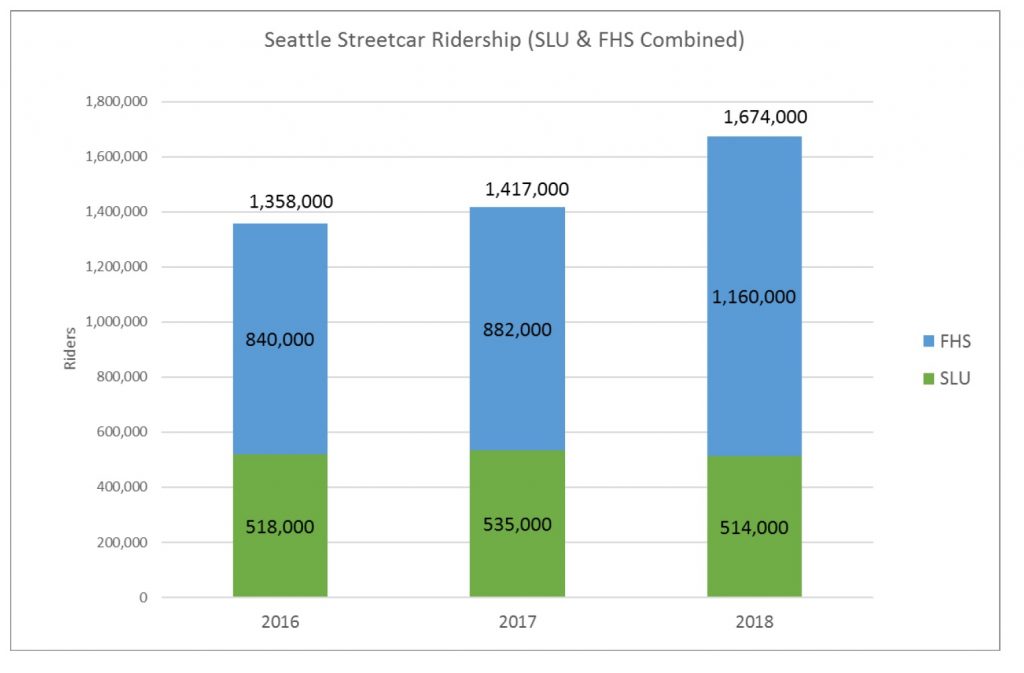 The South Lake Union route has a reputation for constantly being behind schedule, with an on-time rate of 41% in 2017 (The First Hill streetcar had an 84% on-time rate in 2017). This is largely due to a lack of dedicated transit/streetcar lanes along its route, so it gets stuck in South Lake Union traffic backups — and further stuck when cross-traffic “blocks the box.” SDOT claims to be working on a set of street improvements to keep the South Lake Union route closer to on-time.  But it’s no surprise that ridership on the line has continued to drop every year (though Zimbabwe claims it’s bumped up a bit so far in 2019). The SLU line has also suffered from increased competition, as Metro bus route 40 and a RapidRide line were recently changed to serve South Lake Union rather than force commuters to change lines.

Revenues, however, are another matter, and a complicated one. Farebox recovery has continued to lag projections, for different reason for the two lines. For the South Lake Union line, it’s simple: not enough riders. But for the First Hill line, it’s attributed to the same reason that ridership has increased: better connections to transit hubs allowing people to transfer to other transit modes including buses, light rail, and Sounder trains. While that makes the First Hill line more valuable as a transit mode, it also means that fares are apportioned across the modes: when someone takes a trip that starts on the streetcar and ends on a light rail train, that person pays a single fare and the revenues are split between the streetcar and light rail programs. So while the count of riders is going up, the portion of fares is going down.

What this means is that not only do the two streetcar lines continue to operate at a deficit, but the deficit is growing every year. By 2024, that amount is expected to reach as much as $12.5 million, depending on whether Metro and Sound Transit continue to provide financial support for the streetcar. Metro is currently contributing $1.5 million per year, and Sound Transit contributes $5 million. Metro’s subsidy expires at the end of this year, but SDOT claims that it is currently negotiating an extension as part a renewal of its operating agreement with Metro for the two streetcar lines. Sound Transit’s subsidy agreement expires at the end of 2023.

In its work on the Center City Connector plan, SDOT has used the FTA’s STOPS model to estimate what will happen to ridership when the lines are joined together. STOPS estimates a 230% increase in ridership, from 1.73 million to 5.7 million. On an average weekday, that would be a change from 5,500 riders to 18,100. As a point of comparison, Link Light Rail carries about 75,000 riders per day. If the estimates are to believed, that would be a substantial contribution to the city’s transit system.

But it comes at a cost: operating expenses increase. In 2024, the latest estimate is that the annual operating expense would be $27.7 million, versus $16.5 million for the existing lines. Assuming the worst case that neither the Sound Transit nor the Metro subsidies are extended, the operating deficit would be $18.1 million – $5.3 million more than the projected deficit for the two existing lines.

That’s on top of the capital costs to build out the Center City Connector project, including changes that need to be made to support longer, heavier streetcars since they can no longer buy more of the ones in use on the existing two lines. In total, the capital cost is now estimated at $285.8 million: $208.1 million for SDOT’s work, and $67.7 million in utilities work by Seattle City Light and Seattle Public Utilities.

On SDOT’s side, $44.7 million has already been spent, and the city is hoping to get $82.3 million in federal grants. It plans to issue $45 million in bonds, with the debt service covered by commercial parking tax revenues. That leaves a funding gap of $65.3 million (the numbers above don’t add up because about $12 million of the money already spent is eligible for reimbursement from the federal grant funding). On the utilities side, there is an additional funding gap of $22.6 million.

The city has not identified potential sources to cover either the capital or the operation funding gaps.

Here’s an excellent memo written by the Council’s Central Staff that walks through all the financial projections.

To recap: if the Center City Connector streetcar goes forward, the city needs to land the federal grants, fill a funding gap of $87.9 million, and then cover an additional $5.3 million in annual operational funding deficit.

If the project doesn’t go forward, the city doesn’t have to find $87.9 million, but it needs to cover the $12 million it already spent that it thought it would get reimbursed for. It would also be able to use the $45 million in bonds to fund other transportation projects, but it would lose capacity for about 13,000 commuter rides per day downtown.

For clarification: the $9 million requested by the city in the pending bill is part of the $285.8 million cost estimate, not additional spending on top of it. In the short term, it would be an inter-departmental loan that would be repaid in full with proceeds from the sale of the “Mercer Megablock” announced today.

In the committee hearing yesterday, Council member O’Brien reiterated the figures above and noted that the decision whether to fully commit to the project or cancel it was still further down the line — assuming the $9 million is approved by the Council to continue planning and design.  He said that we wanted to see the project “move forward responsibly.” He noted that there isn’t policy agreement among the nine Council members with regard to the project (Herbold in particular has voiced strong opposition), but he wants to get broad agreement on the numbers, timing, and risks.

Council member Pacheco related that earlier this year when he was canvassing his district, the streetcar project raised many eyebrows with constituents. But he said that he also heard the need for more transit investments.

Both O’Brien and Pacheco voted to move the bill out of committee, sending it to the full Council for approval next Monday — the last meeting in August. If, however, some of the Council members want more time to go over the details of the streetcar project, O’Brien may hold it until early September when the Council returns from its summer recess.