Yesterday, Seattle Hearing Examiner Ryan Vancil informed the parties in an appeal related to Transportation Impact Fees that he was re-opening the hearing “to address a narrow question of law not fully briefed by the parties in their closing arguments.”

The case before the Hearing Examiner relates to the first step in imposing Transportation Impact Fees (TIFs): adding a list of target transportation projects to the city’s Comprehensive Plan.  To meet SEPA requirements, city staff issued a Determination of Non-Significance (DNS) related to the Comprehensive Plan amendment that would insert the list. The Seattle Mobility Coalition challenged the DNS finding in an appeal to the Hearing Examiner.

Here is the full text of the email that the Hearing Examiner sent out to the parties yesterday:

The purpose of this email is to determine the availability of the party representatives.  The Hearing Examiner is interested in concluding the re-opened hearing, and issuing a decision as soon as feasible.  The Hearing Examiner’s schedule can accommodate re-opening the hearing on any date starting August 23rd through September 6th.  Please note, HER 2.20.d provides “If a matter is reopened after conclusion of the hearing, parties shall be provided no less than 10 days’ notice of the reopened hearing.”  If both of the parties are amenable to waiving this provision, then the hearing can be set for any of those dates for which the parties are available.  However, if either party requires the notice to follow HER 2.20.d, then only the dates from September 3rd to September 6th are available.

Please indicate your availability.  Thank you.

Hearing Examiner Ryan Vancil has confirmed to SCC Insight that the new hearing is scheduled for Wednesday August 28 at 2:00pm in Seattle Municipal Tower room 4000. Vancil will not be informing the parties what the issue is before the hearing, so it’s unclear whether it will be resolved in the hearing or will require written briefs to be submitted after the hearing – further delaying a ruling for days or possibly weeks. “I anticipate the parties will be given time to provide briefing in response to any questions, but counsel may indicate they are prepared to provide oral argument. The timing for briefing (if any) would be determined at the hearing,” Vancil said.

Council member Mike O’Brien has been preparing legislation to implement TIFs this fall, before he leaves office, on the assumption that the city would receive a favorable ruling from the Hearing Examiner by mid-August. He held a first briefing in his committee on August 6th, in which an overview of how TIFs work was presented and a TIF rate study and capital funding review were introduced into the record. A second briefing was scheduled for August 16th in anticipation of the Hearing Examiner’s ruling being released prior to that, but was postponed when the decision was not forthcoming.

Depending on how quickly the Hearing Examiner issues a final decision after the new hearing, O’Brien may need to scramble to get TIFs implemented this year. The tentative plan, as presented earlier this month, was to fold the legislation into the budget process, which begins at the end of September. But Comprehensive Plan amendments have public hearing and other requirements that stretch out the time it takes to enact them. 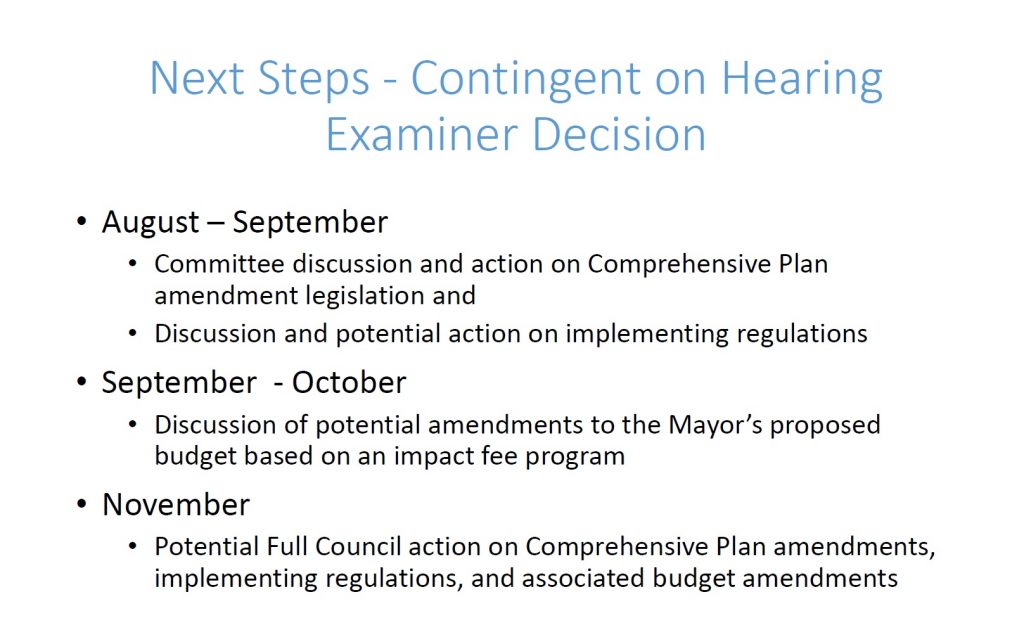 So long as the Hearing Examiner’s decision comes by early September — and is favorable to the city — and the Council relaxes its rules about suspending other legislative work during the budget planning process, then there should be enough time for O’Brien to push TIFs through.