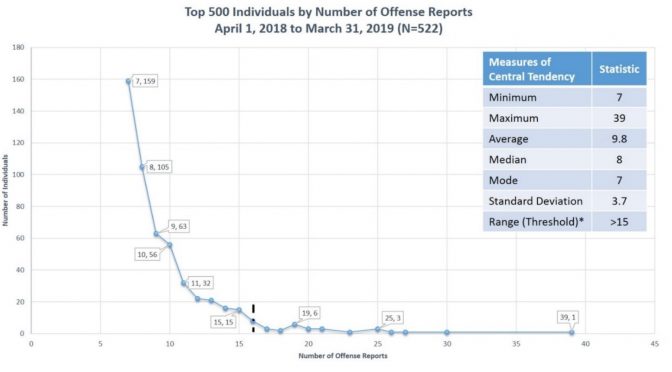 You will likely recall that last February a group self-published a report on “prolific offenders” who cause problems for local communities and businesses, and who cycle through the criminal justice system. As I wrote at the time, that report had plenty of methodological issues and other flaws that limited its usefulness, since the authors didn’t have access to most of the relevant government, law-enforcement, and human-services records. However, in the aftermath of that report, Mayor Durkan commissioned her own task force to look into the issue of prolific offenders. That group published their report last week, concurrent with a budget proposal from the Mayor for four new programs to address the problem.

In contrast to the group earlier this year, the Mayor’s task force had the “dream team” of cross-agency representation, including:

They got together and shared perspectives; but more importantly, they shared data. That let them analyze the top “prolific offenders” (rebranded “high barrier individuals”) far more accurately than the first report could, developing a much clearer picture of the path that individuals take through a variety of different agencies and where some of the breakdowns in the system are.

After some disagreement on the best measure for identifying the people to focus on, the task force eventually settled on the number of times an individual appeared in SPD incident reports as potentially committing an offense. They identified 500 individuals who each had at least 7 offense reports between May 2018 and April 2019. Those individuals were cross-matched in the judicial system and human-services records.

As we would expect, the 500 most frequent offenders have a “power law” distribution, where most of them committed fewer offenses, and a very small number committed a large number of offenses. Together, they represent 4,885 reports, and 1,345 court cases covering 2,019 charges. 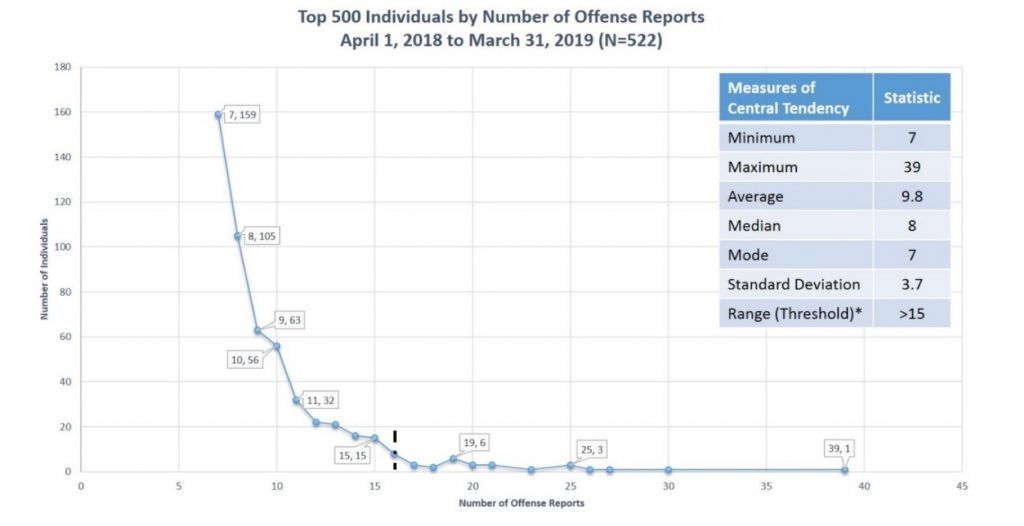 Most of the charges were for property crimes, with a smaller set of violent crimes. 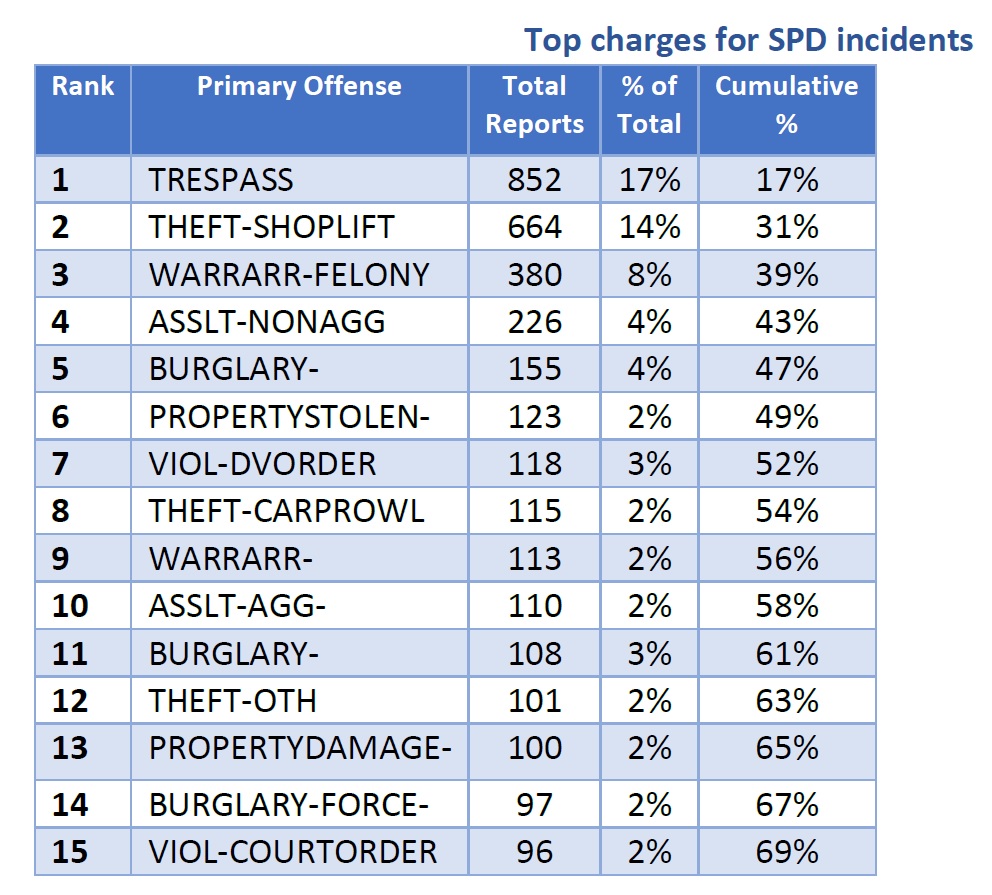 This was even more pronounced among the top 100 offenders (the leftmost bar in each chart).

According to the study, the vast majority of incidents were in the downtown core, especially for the 100 most prolific offenders. 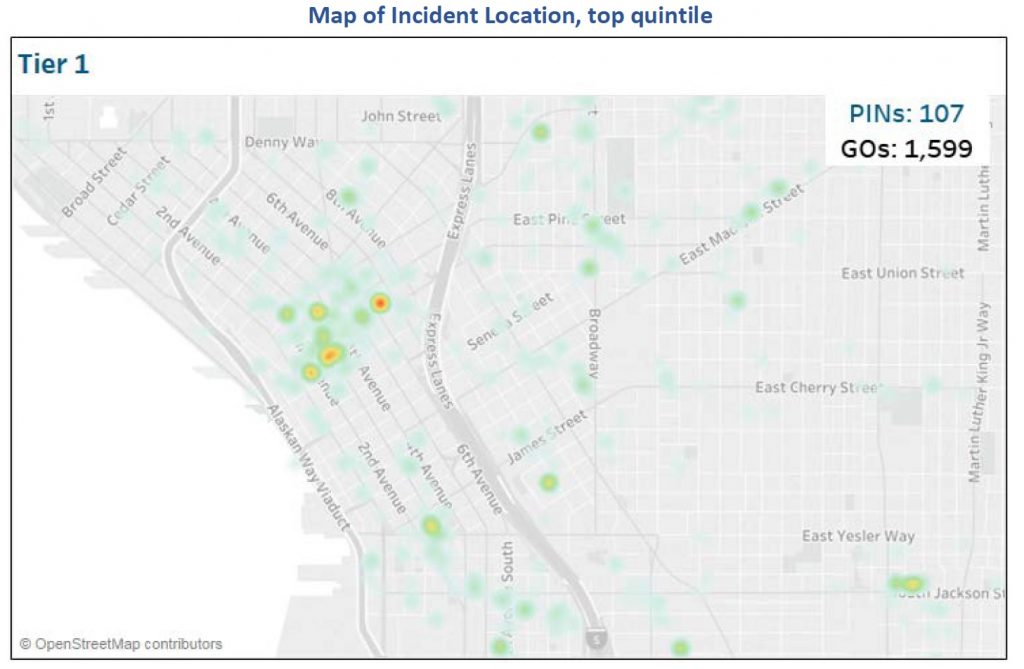 Of the 1,345 cases, at the time of the study 31% resulted in all charges being dismissed, 32% in a guilty finding, and the remaining 37% were still pending. 63% of the 500 individuals had at least one of their cases dismissed, and 53% had at least one charge resulting in a guilty finding.  The most common reason for a dismissal was a negotiated plea — 51% of the dismissals, in fact. 23% of dismissals were because the defendant was declared incompetent to stand trial. 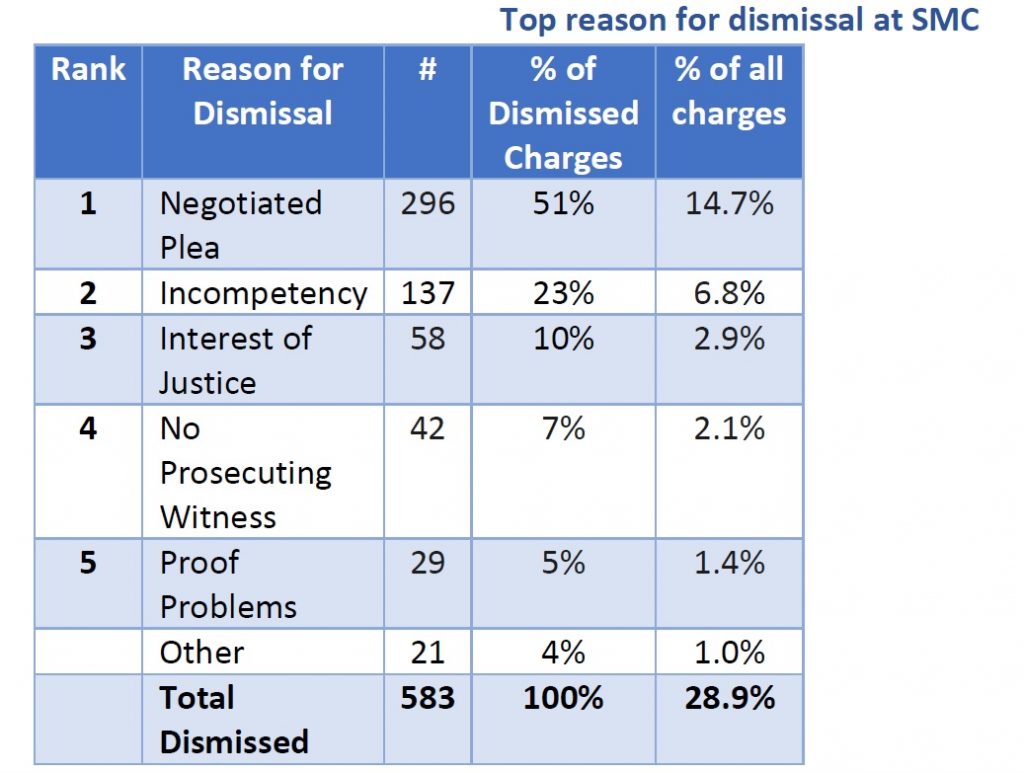 Of the 500 individuals, the study team matched 465 (93%) to records in the King County Behavioral Health and Recovery Division’s information system (BHRD). Generally speaking, the racial, gender and age demographics for those 465 matched the general jail population — which means they shared that population’s racial disparities from the general population of Seattle. The one exception is that women were overrepresented in the prolific offender group.

Two-thirds (318) of the 465 individuals had a clinical diagnosis in BHRD in the last three years. Of those 318 people:

64% of the 465 were currently enrolled in behavioral health services with a King County contracted provider — but “enrolled” does not mean they are actively receiving treatment, so it’s hard to draw conclusions about the effectiveness of the services. 73 of the 465 (16%) were enrolled in one of the four major “Familiar Faces” programs in King County:

Three of the four programs (LEAD, Vital, and PACT) have shown some success (keeping in mind that their clients are some of the most challenging people to treat, so the success rate will never be close to 100%); LINC has not yet been formally evaluated. But all four programs are capacity constrained: Vital can handle up to 60 individuals, LINC up to 90, and PACT 270. LEAD has a funded capacity for 525 though it is currently serving 700 clients. Keep in mind, as I said above, that only 73 of the 500 “prolific offenders” are enrolled in one of these programs; they are largely serving another client base, to try to prevent them from ever becoming prolific offenders.

Seattle Municipal Court, where the majority of the cases are handled, also offers five relevant programs and services for people coming through its system:

According to the study report, the task force had difficulty reaching consensus on the appropriate response, beyond a belief that a public-health approach focusing on prevention and addressing the underlying issues is “vital to achieving long-term success for the public and for the specific population.” Some favored a harm-reduction approach, recognizing that incarceration won’t solve any of their underlying issues. There was also disagreement about mandatory vs. voluntary treatment. The task force members generated a collection of potential responses, roughly categorized as:

Ultimately, they focused on four pilot programs as their recommendation for first steps (recognizing that it was not a complete or ultimate solution), which Mayor Durkan is now proposing to take forward as part of her 2020 budget proposal.

According to the Mayor’s press release, her 2020 budget proposal will include nearly $3 million to fund these four pilots, with the King County Executive proposing an additional $2.4 million and the Seattle Municipal Court kicking in $120,000. If the Council approves the funding, the programs could roll out in early 2020.

If you’re looking for a comprehensive solution to the problem of prolific offenders, this will disappoint you. The study report advances our understanding of the cohort of prolific offenders, though it also exposes the continuing lack of consensus on an effective and humane response. We can hope, however, that with investments in a number of programs the city will learn which ones are successful and can further scale those up in the future.