This afternoon the Seattle Hearing Examiner issued a long-awaited ruling on an appeal of the city’s SEPA Determination of Non-significance (DNS) for its first step in establishing Transportation Impact Fees (TIFs). He found that the city had impermissibly left a section of the SEPA checklist blank, and remanded it back to the city to at least partially complete it.

The appeal involved several issues, but there were three main ones:

So the good news for the city is that it doesn’t need to do a SEPA analysis at this time on every project it wants to list as eligible for TIFs; it can wait and do that on a project-by-project basis as it decides to move forward on them.  Doing them all now would have pushed out the timeline for implementing TIFs for several months, if not a year or more.

The bad news is that it needs to go back and say something in Section B to show that it did even a basic level of analysis. That should be a pretty quick effort for the city to turn around. However, when it’s done, the city must submit it back to the Hearing Examiner and the Plaintiff, and the plaintiff will have an opportunity to file a rebuttal. Then the Hearing Examiner will make a new ruling on the adequacy of the SEPA DNS. 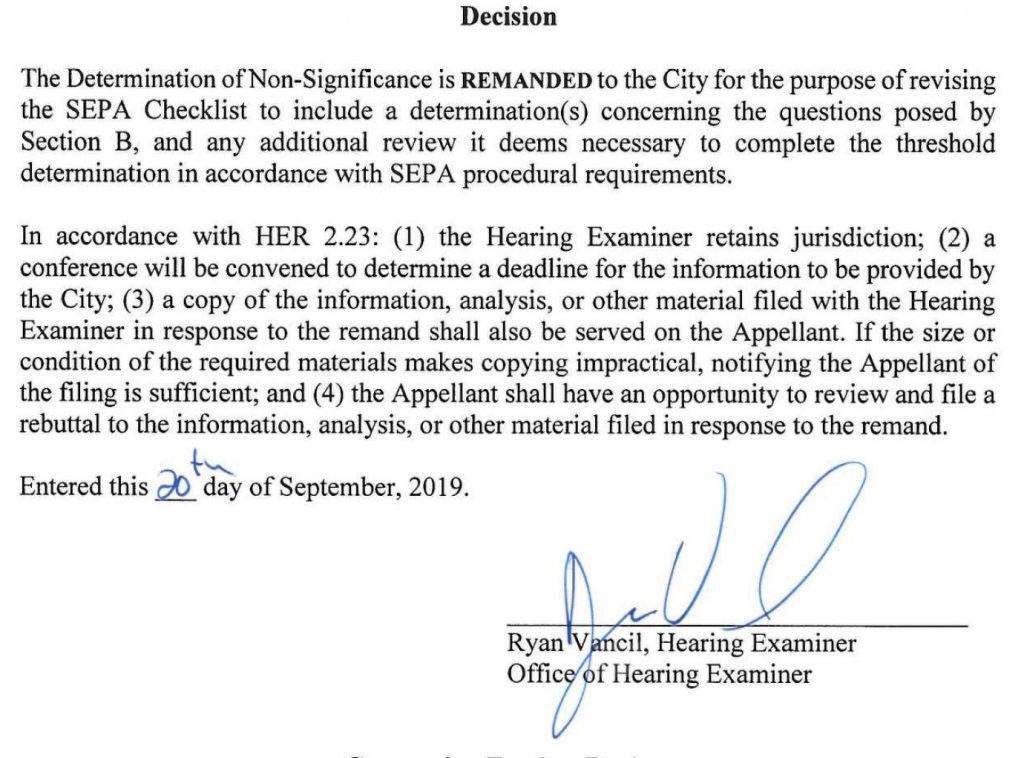 Here’s the catch: the primary sponsor of the TIF legislation is Council member Mike O’Brien, who leaves office at the end of the year. Next week the Council begins its work on the 2020 budget, and sets aside everything else until the end of November. Then it has two weeks of legislative time in early December, followed by a recess for the rest of the year. If today’s ruling had gone in the city’s favor, then the Council could incorporate the implementation of TIFs into the 2020 budget process. But now it’s almost certainly going to miss the budget process, and it’s looking increasingly likely that O’Brien won’t have enough time remaining in office to pass it into law once the Hearing Examiner makes a final ruling.  That responsibility will now fall on the member of next year’s Council who oversees transportation — assuming that person supports TIFs.

So even though today’s ruling went mostly in favor of the city, it lost just enough to (probably) push the effort to establish Transportation Impact Fees out beyond the end of this year and add doubt to its ultimate fate.

The Hearing Examiner will be scheduling a conference with the parties to determine the schedule for the city to revise its SEPA checklist, and for the plaintiffs to file their rebuttal. We will know more about when to expect the next Hearing Examiner ruling once that schedule is set.