Yesterday HSD Interim Director Jason Johnson delivered a report to the City Council on the performance of the city’s homeless-response programs through the first half of 2019. There was some good news.

Johnson began by reminding the Council that the goal of the city’s homelessness response is to make homelessness rare, brief, and non-recurring. To that end, he explained how the department’s programs successfully served more people in the first half of 2019:

Johnson credited this to having fully ramped-up programs in place; you may recall, HSD ran an RFP in 2017 to re-bid its homeless-response contracts, and in the first half of 2018 those awardees launched programs under the new contracts. 2019 is the first time that the new awardees started the year at full capacity, so in retrospect it’s no surprise that they are performing better — but still great to see. In addition, the “rate of exit” to permanent housing from many of HSD’s programs improved over the previous year, suggesting that they are getting incrementally better at what they do.

As Johnson explained, the difference between success and failure of programs is mainly a factor of the extent to which services can be made available to people and their current housing/shelter situation grants them the time to access those services (rather than kicking them back out on the street in the morning). The city’s “tiny home villages” saw a dramatic improvement this year, mainly because more services and case management were offered. In fact, tiny home villages are now showing significantly better outcomes than enhanced shelters, because of the combination of access to services and a more stable living situation that gives residents the time to access those services.

Based on a recommendation from the Poppe report, HSD also restructured its diversion resources so that rather than making diversion a separate program that people enrolled in, it became a service that could be accessed through “front door” case managers in other programs (such as enhanced shelters). This led to 441 households being diverted out of the homeless system.

Also, some of the glaring inequities in outcomes based on race/ethnicity have been addressed. African Americans, natives, and Hispanics are over-represented in the homeless community. Johnson said that HSD’s contracts now call out these demographics to ensure that they are served well, and they look to work with programs, such as the Chief Seattle Club, that know how to work with them.

Council member Juarez noted that HSD also made a helpful change in that it looked beyond organizations that were traditionally homeless service providers to find others that had expertise in working with specific demographics — and were often doing the work already as an adjunct to their core missions. That led to HSD funding groups such as United Indians and Mother Nation.

All that said, there are still issues to be wrestled with, including:

And that leaves the big question: are we making a dent in homelessness? Council President Harrell raised this question directly, wanting to understand how the city’s (and county’s) efforts compare to the size of the problem. AllHome King County is the official keeper of homeless statistics on the homeless population in King County; while their online dashboard gives data for the county as a whole and not just Seattle, we can generally extrapolate because Seattle is a dominant part of the county with a large fraction of the homeless population (and the programs and services). 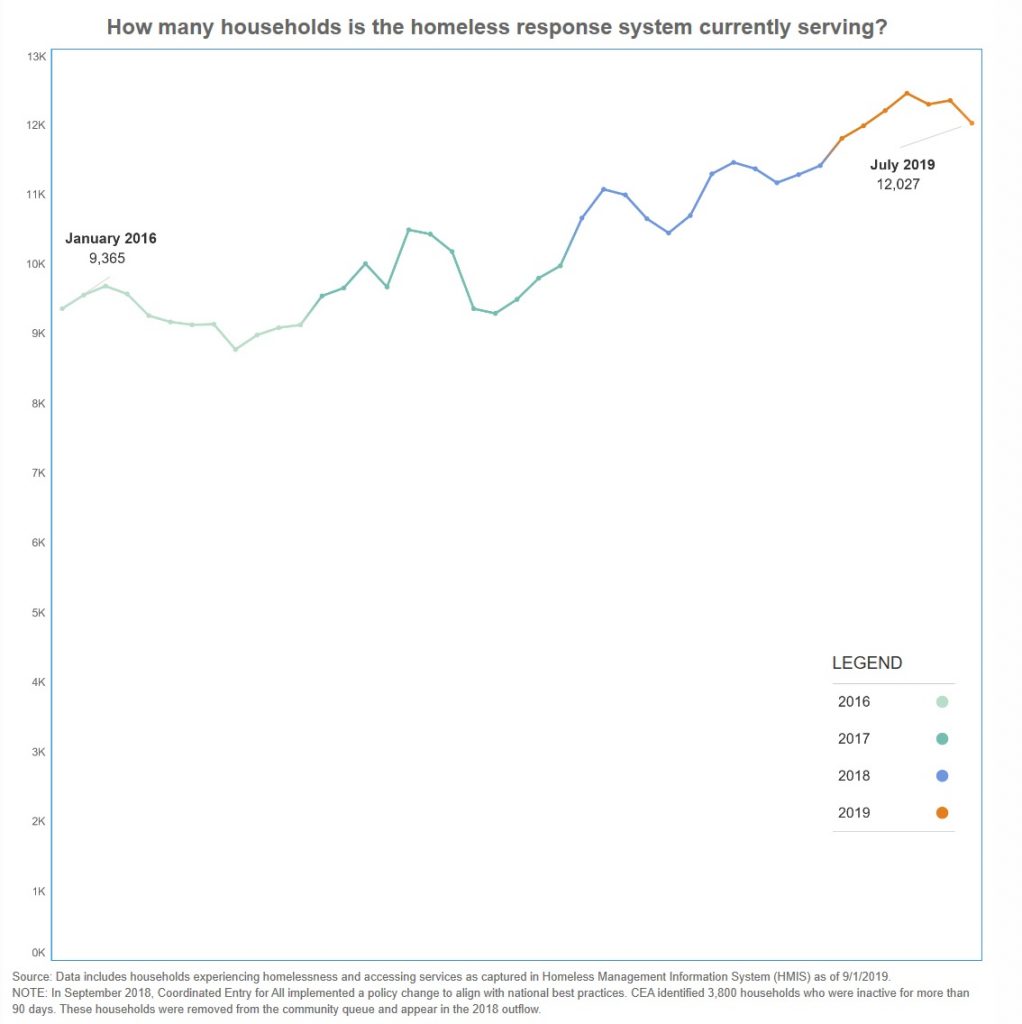 Last year, there were 22,500 entries into the system, and 23,800 exits. But before you get all excited about turning a corner, there are two notes on that: first, a single household can enter and exit the system multiple times in the same year; and second, there is a footnote on those stats noting that there was a change in the counting methodology that caused a one-time increase of 3,800 in the number of exits. 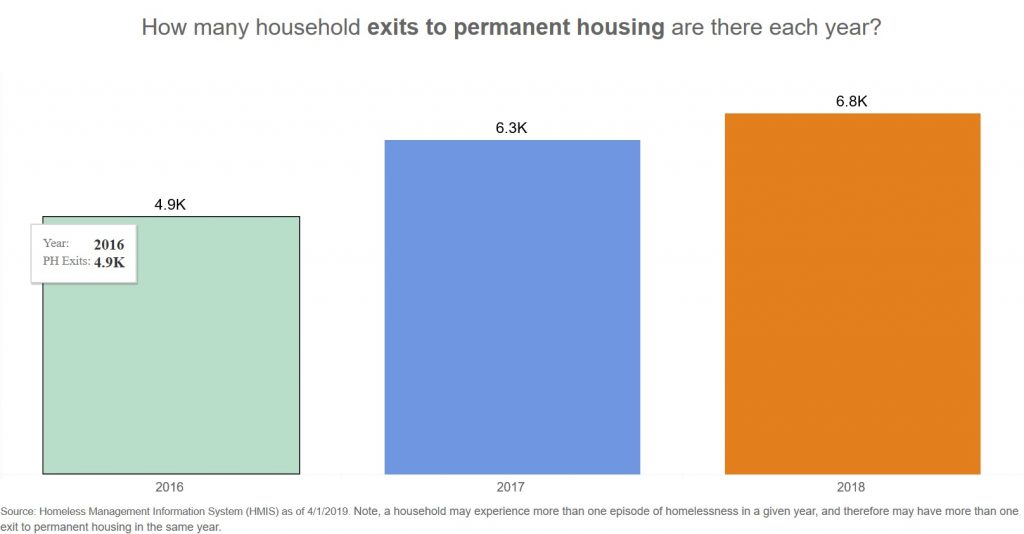 This is, of course, an incomplete picture of what’s happening with the population. It doesn’t tell us what happened to the 17,000 households who exited the system other than to permanent housing. It also tells us nothing about how long households stayed in the system before they exited, or how many are cycling repeatedly through.  I have requests in to AllHome to try to get additional data to assist in answering those questions. But in the meantime, the data that we have doesn’t tell us whether or not we are making a dent in the homeless crisis. The Point in Time count this year showed a decline in total homeless people, but as I wrote earlier this year, its methodology is highly suspect and the numbers are not to be trusted. The HMIS data shown above suggests that there are more people in the homeless response system (versus on their own living on the streets), which may be a sign that the programs are gaining more acceptance. It also suggests that the programs are scaling up and getting incrementally more effective in delivering valuable services to homeless people, leading to an increase in households exiting the system to permanent housing.

But many of the constraints are still in place: not enough beds in mental-health and substance-abuse treatment programs, and more importantly not enough affordable housing. As Mosqueda aptly pointed out, the lack of affordable permanent housing is the biggest impediment to moving people out of the homeless system into housing, and while the city and county are making incremental investments in affordable housing, it’s unclear whether the level of investment is keeping pace with the growth in the number of people who need it — let alone “making a dent” in the problem.

In the meantime, the city and county are still marching forward, albeit slowly, with a proposal to form a consolidated, regional governance structure for the homeless response across the county. If the plan moves forward, then by early next year this may no longer be Johnson’s problem to report on.