With a plan in the works to transition to a regional authority to organize the response to the homelessness crisis, yesterday the City Council and a collection of city departments had a public discussion of the Mayor’s proposed homelessness budget for next year.

Ironically, the proposal to move to a regional approach does not have a large impact on the plan. Assuming the plan moves forward (and ongoing arguments about oversight and accountability cast a bit of doubt on that), next year would be a transitional year where city and county staff and budgets move over in stages and continue the same work in the short term. Accordingly, the city is planning and budgeting for the programs and services it wants to deliver independent of whether it’s in-house or provided by the new regional authority under a service agreement with the city.

Still, and perhaps as a result of the impending reorganization, the Mayor is not proposing any major new initiatives around homelessness; largely her budget makes surgical adjustments to some existing programs and focused investments in a handful of areas to address some pain points and opportunities.  Overall, the budget across departments will cross the $100 million threshold next year, up $5.5 million from this year. That excludes an additional $25 million in capital expenditures by the Office of Housing targeted at the homeless or formerly homeless. 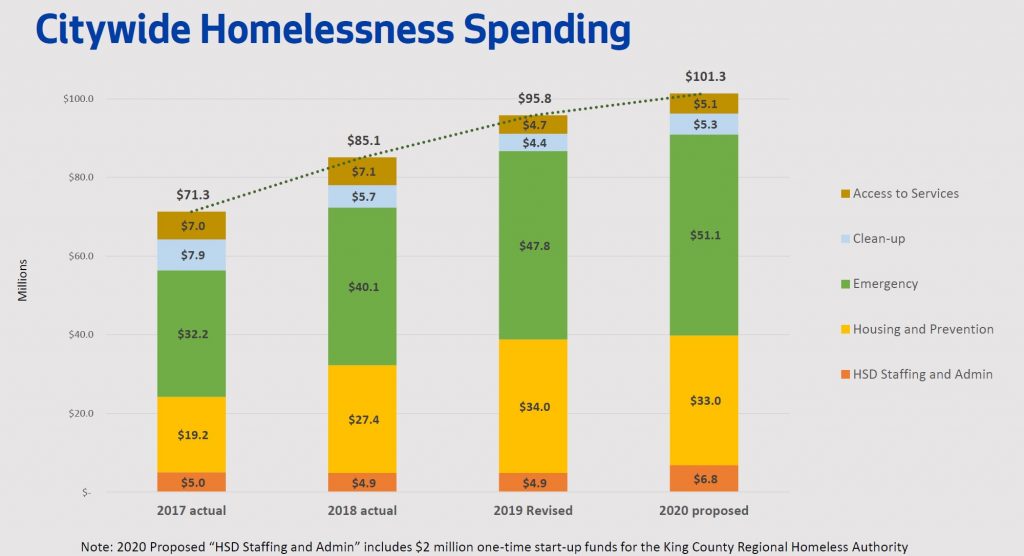 The vast majority of the spend is still within the Human Services Department, though ten other departments also have budget related to homelessness. 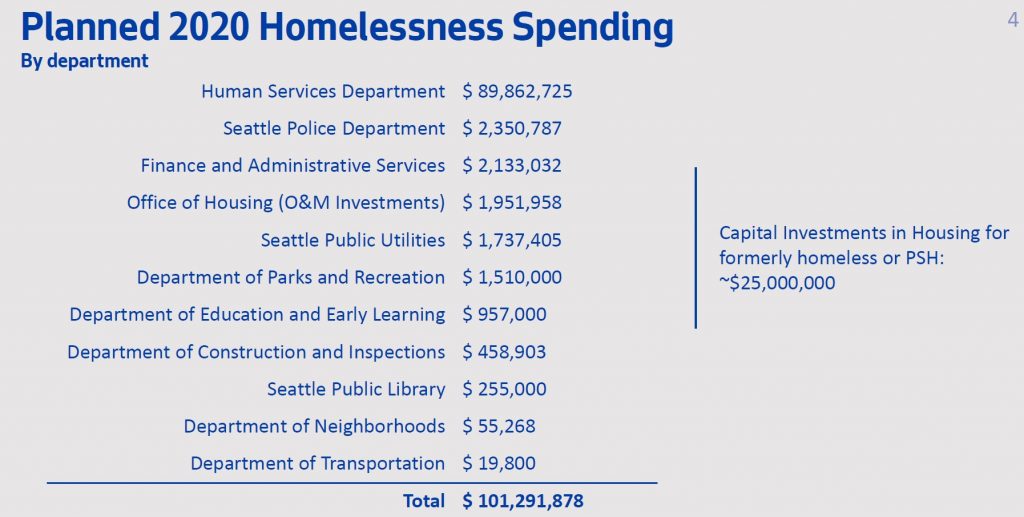 Here are some of the areas of focus seeing proposed changes in 2020:

Wage increases. Following through on the Council’s directive to build in cost-of-living increases into HSD contracts in order to help ensure that human services providers can pay living wages and stabilize their workforces, HSD will be adding $914,000 to their contract budget.

Housing. the Office of Housing highlighted that it has over 16,000 units of affordable rental housing in operation or under development, including 6700 current units targeted at people earning 30% of AMI or less and of which 4300 are reserved for those currently or formerly homeless. They also noted that they have 900 additional units in the pipeline aimed at 30% AMI or below, of which just over half are for the homeless. Council member Mosqueda pushed hard on the notion that the 30% AMI group was key to making a dent in the homelessness crisis, and wanted the city to have better data on understanding how many Seattle residents making under 30% AMI were extremely rent-burdened (her estimate was around 22,000).

The Mayor’s 2020 budget plan proposes using proceeds from the “local option” sales tax to spend $22.5 million on new permanent supportive housing next year: $4.5 million in tax revenues in 2020, plus an $18 million bond paid for with future revenues.

Finally, it proposes an additional $515,000 to extend the pilot for the Rental Housing Assistance Program, which aimed to stabilize people on the waiting list for a Section 8 voucher by committing to provide assistance until a voucher was issued. When the pilot program began, the typical wait for a voucher was 12 months. But since then, housing got more expensive so the housing authority needed to spend more on each voucher issued — and thus issued fewer vouchers. Now the average wait is pushing 2 years, and some of the original enrollees are still waiting. The city needs the additional funds to fulfill its commitment to those households.

Standing up the new regional authority. The city is budgeting $2 million for the startup costs for the new authority in advance of existing departments moving over. That will cover recruiting costs for an Executive Director, 2020 wages for the new Executive Director and staff, and other administrative and operations costs.  King County, for its part, will be providing office space and also covering part of the startup costs.

Nursing resources. For the last two years, the Seattle Fire Department has been drawing attention to the high number of “low acuity” 911 calls for homeless people that currently require a response from the department’s most costly resources. This year SFD created the “Health One” unit to respond to many of those calls in a more cost efficient manner, and next year looks to deploy a set of nursing resources to further refine its effort to deal with low-acuity calls.  The department has identified the five shelters that have generated the most 911 calls, and will have four nurses providing on-site support at those sites at a cost of $650,000. In addition, it will set up a nurse call line to provide non-emergency support to other shelters, at a cost of $40,000.

Tiny house villages. While there are no plans to expand the number of tiny house villages, two of the existing ones may need to move when their permits expire early next year: Georgetown and Northlake. The city is setting aside about $1.2 million to cover the relocation costs, including ramping own the old sites and either expanding capacity at existing villages or setting up new ones.

However, the Navigation Team, as the city’s primary vehicle for “sweeps” of homeless encampments, is coming under increased scrutiny. Earlier this year it became known that the team has shifted its emphasis from cleanups of encampments where a 72-hour advance notice and meaningful offers of alternative shelter is required, to cleanups of encampments that are obstructions or hazards where no advance notice and offers of shelter is required (though in practice they are sometimes still given 72-hour notice). This has led to allegations that the Navigation Team is simply pushing homeless people from place to place, destabilizing them while not providing meaningful help. While Council member Sawant has been the most outspoken critic of “sweeps,” Council member Mosqueda has recently become the champion for de-funding the Navigation Team. Yesterday she voiced concern that the team would be disconnected from the planned regional homeless authority since under the current plan it would not move over; she also suggested several times that the Navigation Team budget (with the exception of the SPD portion) could be repurposed for other uses such as the LEAD diversion program. One surprise in yesterday’s conversation: recently HSD finally worked out how to close the loop on referrals to shelter made by Navigation Team staff in order to track how many people actually arrive at the shelters and check in; that is a new capability that will directly speak to how effective the Navigation Team is in getting homeless people into shelter. Expect a lot more debate about the future of the Navigation Team before the budget is finalized.

Dealing with vehicle camping. This continues to be a sore spot, given the rapid rise over the last two years in the number of homeless people living in vehicles parked around the city, as well as the recent focus on predatory “RV ranching.” The city is taking another shot at setting up “safe parking” lots despite the expensive failure of its first attempt a few years back. This time it is partnering more closely with faith-based organizations to set up more, smaller lots, rather than fewer, larger ones, in the hope that the partner organizations can allocate a small portion of their parking lots and the use of their hygiene facilities without getting overwhelmed.

While that pilot program moves forward, the city still struggles with “RV remediation”: cleaning up after RVs whose occupants dump garbage, needles and human waste in the surrounding areas, and hauling away derelict and abandoned RVs. This responsibility falls upon three departments: Finance and Administrative Services (FAS) to haul off and dispose of RVs, SPU to clean up the surrounding area, for RVs on city streets and Parks and Recreation to do the same thing for RVs on park property.

Disposing of RVs has become increasingly expensive, as the city is seeing larger derelict RVs on the streets (they pay by weight for disposal) and because there is currently only one vendor they can use for disposal services that meets the state’s environmental regulations. Nevertheless, the city hopes to expand the number of focus areas for RV remediation from the current 7 to 14 next year.

FAS, SPU and Parks are asking for an additional $420,000 next year to cover costs for increasing cleanup and disposal costs.

General garbage collection and encampment site cleanup will continue as well, as part of the “Clean City” initiative. 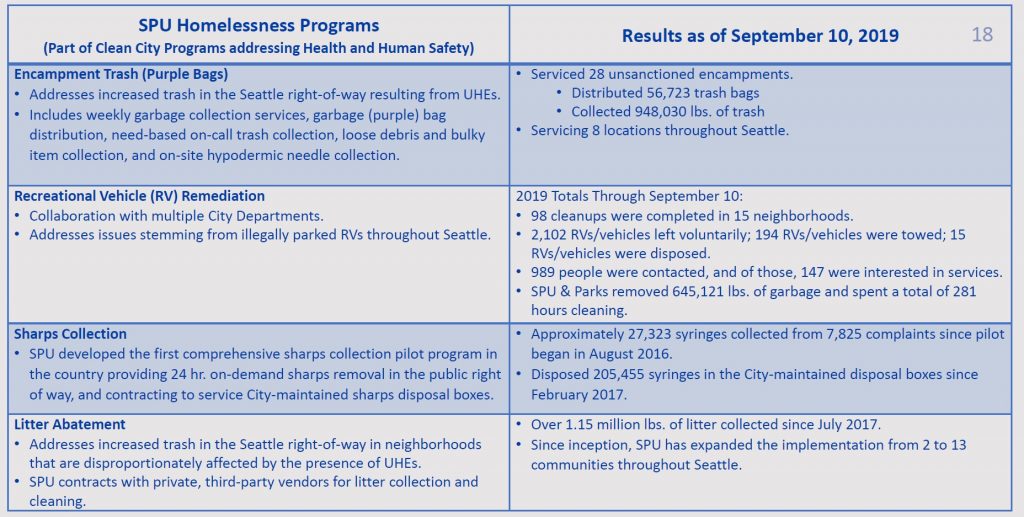 The big issues that the Council will wrestle with in the coming weeks are becoming clear:

For the next week, the Council members and their staff will be hard at work writing “Issue ID” papers to highlight budget issues they are looking to address. Those will become public starting on the 16th, when the Council starts three days of meetings to discuss those issues — and we all get to see what kinds of changes the Council members want to make.