This afternoon, the Council gave final approval to a somewhat controversial ordinance making several changes to the SEPA review and appeals process. Four last-minute amendments were adopted, three of which were fairly minor. The fourth, offered by Council member Herbold, would have clarified that any project that adds 40 or more parking spaces beyond what is required will be subject to a SEPA review. While several Council members supported it in principle, there was concern that it would slow down the creation of new housing. Council member O’Brien, who participated in this afternoon’s meeting by phone, argued that the city should address what he views as the excessive parking, but he preferred alternative paths rather than using SEPA review for that purpose. The amended ordinance passed by an 8-0 vote (Council member Gonzalez was absent today).

The Council also gave unanimous approval to a resolution stating its opposition to Tim Eyman’s Initiative 976, which would have reset car tabs back to $30 and decimated funding for transit projects. Eyman himself showed up for the public comment session for the resolution — though the crowd was clearly not with him. 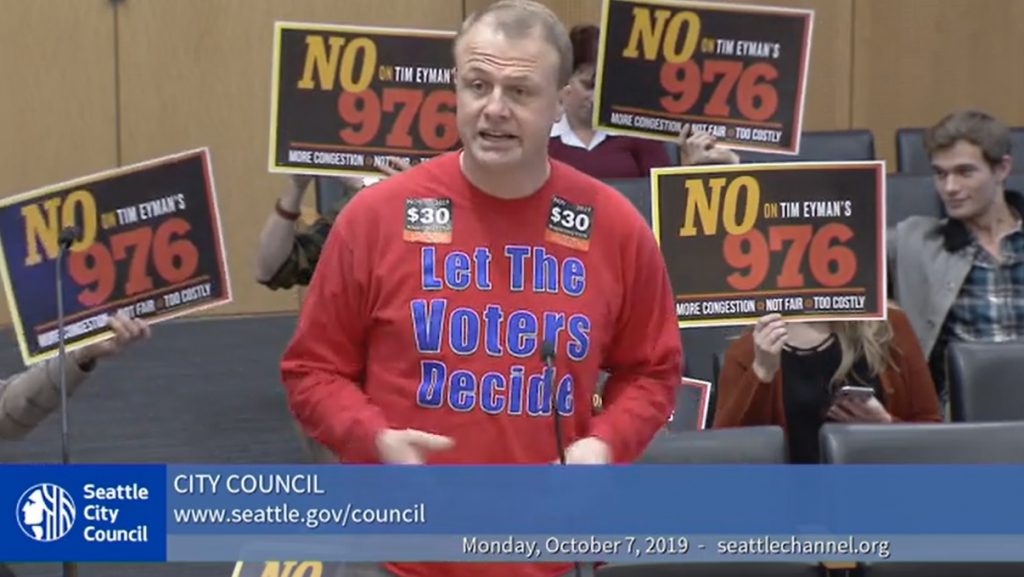 Finally, the Council postponed (again) until November 25th consideration of a rewrite of the city’s hate crimes ordinance. Council member Herbold, the bill’s sponsor, said that the Mayor’s Office is still conducting outreach.

This morning, the Council got a quick preview of the next state legislative session from the city’s Office of Intergovernmental Relations. The session, scheduled to begin on January 13, will be a “short” 60 days and focus on the supplemental budget bill for the second year of the 2-year budget passed last year. The OIR is assembling the city’s legislative agenda document; it expects to have an initial draft for the Council’s review on October 21, and a final version for the Council to pass in early December.

The council also was briefed on the plan to start tolling on the SR99 tunnel on November 9th. WSDOT staff reviewed forecasts for traffic, based upon traffic patterns when tolling began on SR520.

Current tunnel traffic is nearly identical to the Viaduct during peak times: about 5000 vehicles per hour. WSDOT predicts that will drop to the low 3000’s when tolling begins, then over 30 months rise to the low 4000 range. SDOT and WSDOT said that they have an extensive monitoring plan for the Seattle core to track what actually happens and how much spillover there is to surface streets.

SDOT and WSDOT reminded the Council of the full timeline of the “Seattle Squeeze,” which will begin to ease up next year when the Northgate Link extension opens.

Today was Council member Mosqueda’s last City Council meeting for the year, as she is due to give birth later this month and plans to take her full 12-week parental leave. Mosqueda did say that if all goes well she plans to join the Council for its final budget votes on November 18th and 25th.