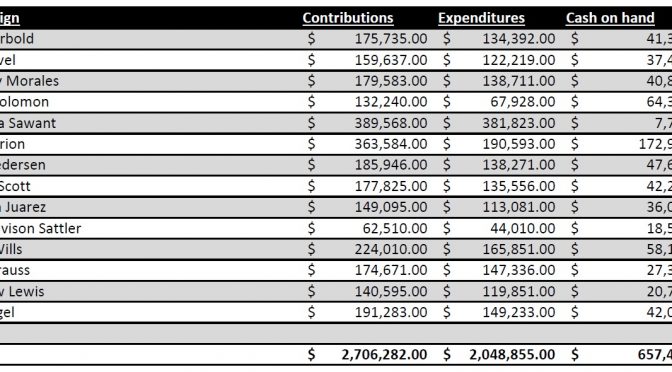 Largely I’ve tried to stay above the fray of the City Council elections, but yesterday was an important milestone: three weeks out from Election Day, the fourteen City Council candidates and the registered PACs all were required to file a campaign finance summary (a “Form C-4” report). I scraped the numbers (well, three important ones), and here’s a glimpse of their fundraising and expenditure numbers — and perhaps more significantly, how much cash they are set to spend over the next 21 days.

Here are the campaign numbers:

There has been $2 million spent to-date (including the primaries), and $657,000 of cash saved up for the sprint to the finish.  Of particular note is the District 3 race, where Orion is sitting on a boatload of cash, and Sawant has almost none — though both are still fundraising. It should be no surprise, then, that Sawant’s campaign sent out an “emergency” fundraising call yesterday after Amazon dropped $1 million into the Chamber of Commerce’s PAC war chest — though it’s not clear that Orion even needs the Chamber’s financial help at this point with the amount of money his campaign is sitting on. Also, many of the campaigns have spent the last two weeks designing and buying their final round of ads, which are now “in the pipeline.” So the cash on hand isn’t necessarily representative of how visible each candidate will be over the next three weeks, though it is more representative of the resources they have on-hand to respond to any new issues that arise. 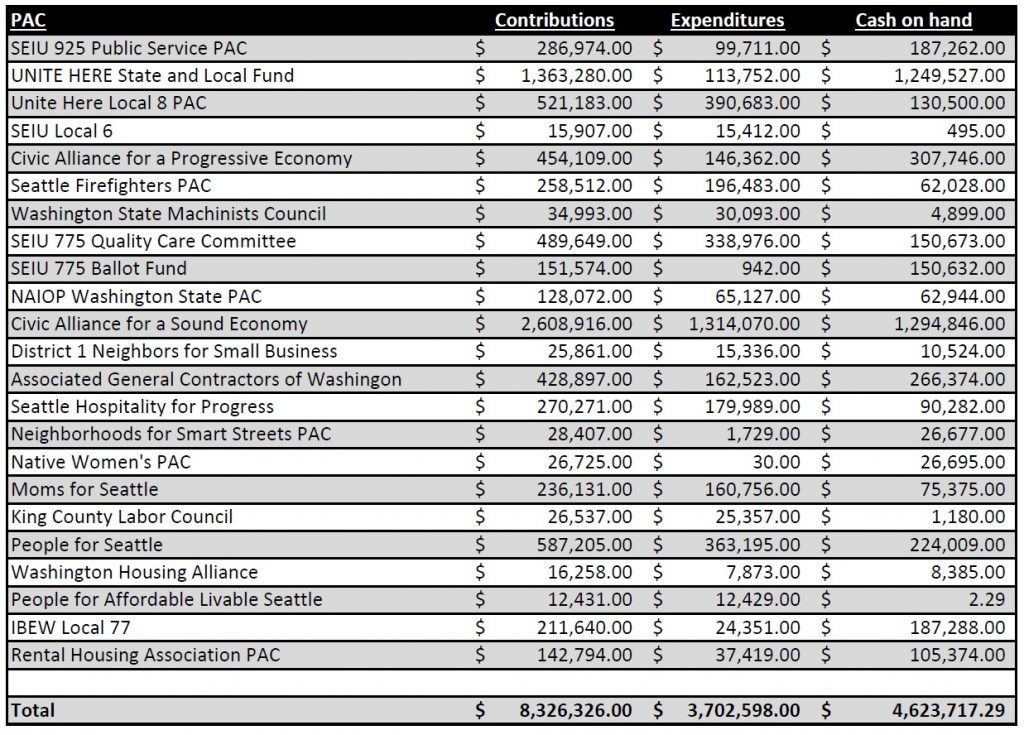 One caveat: the contribution/expenditure numbers are a little goofy because some PACs pass money along to others, and those transfers are included by the PACs in their contribution and expenditure disclosures. I’ve tried to take out the largest of those transfers, but some of the smaller ones are still included. They don’t affect the “cash on hand” figures though.

As with the campaigns, many of the PACs have made large advertising buys over the past two weeks, and are locked into their plan for the final three weeks.

The PACs have spent nearly twice as much as the campaigns themselves so far in this election cycle, and collectively they are sitting on seven times as much cash to spend over the next three weeks. That doesn’t mean that they will spend all of it (and some of them are poised to spend on other races, such as the County Council or Referendum 88), but they will certainly spend a lot of it on the City Council races.

Another important observation: Amazon and the Chamber of Commerce aren’t the only ones pouring in huge amounts of money in an attempt to influence the election. There are three camps: the business community, the “rich people” (i.e. People for Seattle and Moms for Seattle), and the unions and labor advocates. All three have spent generously, and all three are sitting on huge war chests for the sprint to the finish line.

The final 21 days of this election are going to be crazy. Prepare to be overwhelmed with ads, flyers, and canvassers. Be wary, do your research, and ask lots of hard questions.

But most importantly: vote.

Researching and writing these posts take a lot of time, effort, and resources. If you find my reporting valuable, please consider supporting my work by making a contribution on my Patreon site. A contribution of even just $1 a month helps. Thanks!