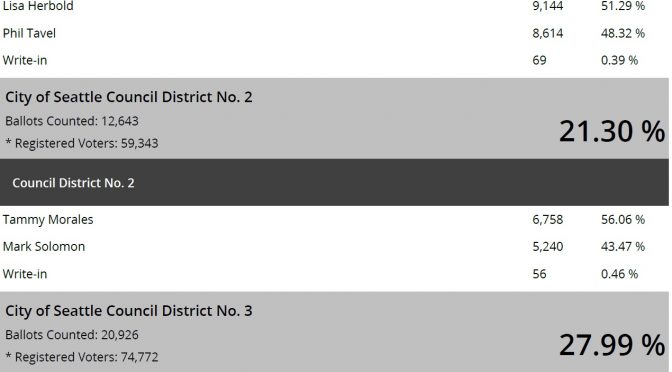 The first night’s election results are in. Here’s what they say.

A big caveat: there are reports that many ballot drop boxes in the city were completely full today, so there are tens of thousands of ballots still to be counted. 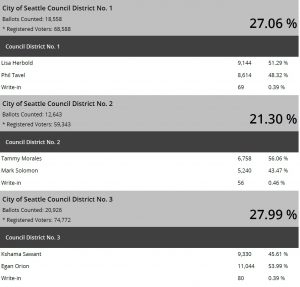 You can read the full first-night results here.

The conventional wisdom in Seattle elections is that late-counted votes tend to skew to the left, so you can expect the progressive candidate in each race to pick up a few percentage points in the coming days. By the end of the week, the vast majority of votes will have been counted and the results will be near-final.

If the conventional wisdom holds true again, then Morales, Pedersen and Juarez have safe margins of victory with tonight’s results. Herbold and Strauss hold small leads now, which they will probably extend a bit.  And the District 3 (Orion/Sawant) and District 7 (Lewis/Pugel) races are too close to call; they will depend on how much of a left shift there really is over the next few days.

King County Elections will release their next update around 4:00pm tomorrow.

In statewide news, I-976 seems to be passing by a significant margin, and Referendum 88 seems to be failing in a very close vote.  Seattle’s uncounted ballots might flip the Referendum 88 outcome, but it’s unlikely to change the I-976 decision.