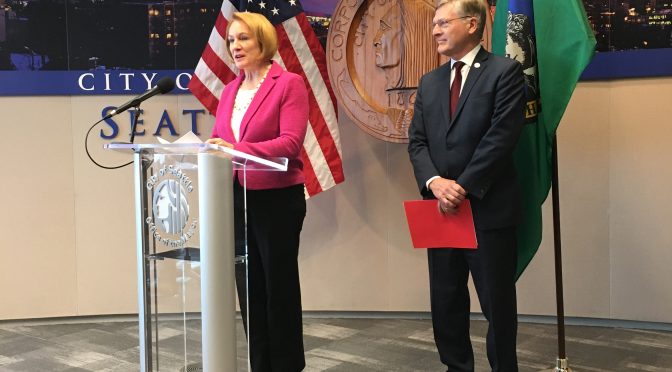 This afternoon, Mayor Jenny Durkan and City Attorney Pete Holmes held a press conference to lay out their plans for how the City of Seattle is responding to the likely passage of Initiative 976.

Initiative 976, Tim Eyman’s latest foray into populist voter intiatives, rolls back car tabs to $30 and repeals authorization for transit benefit districts to impose certain taxes and fees. As of this writing, it is currently passing by a 54% – 46% margin, and while that may tighten a bit as the rest of the King County votes are tallied, there aren’t enough remaining votes to flip the result.

City officials estimate that the passage of I-976 will cut about $32 million of transportation funds from the city budget: a $60 car tab fee that is part of the Seattle Transportation Benefit District approved in 2014, and a separate $20 car-tab fee for basic maintenance services. Here’s a summary of the full fiscal impact of I-976 – nearly 2 billion dollars to state government, and $2.3 billion to local and regional governments, over the next six years. 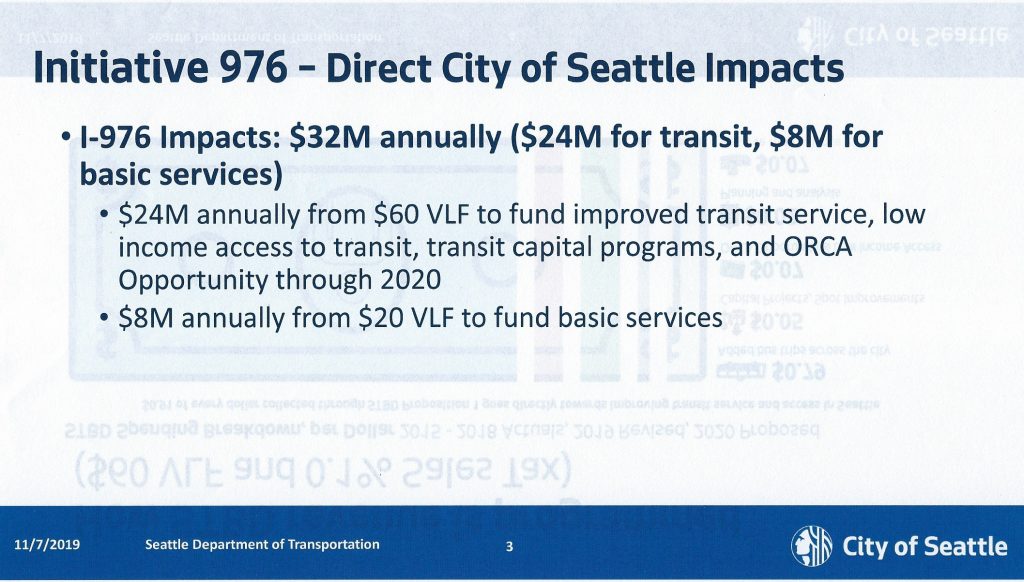 The STBD $60 fee produces about $24 million of revenue per year. Cutting it would put in jeopardy: 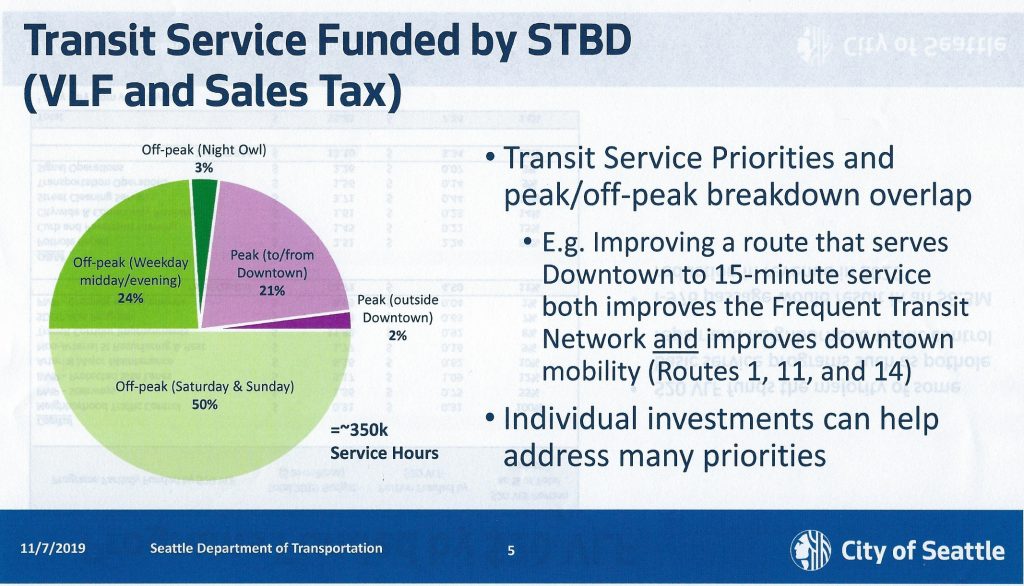 The $20 car-tab fee produces about $8 million per year for maintenance and safety programs. According to the city, cutting it jeopardizes about 80% of the city’s pothole repair budget, and 100% of SDOT’s neighborhood traffic control program. 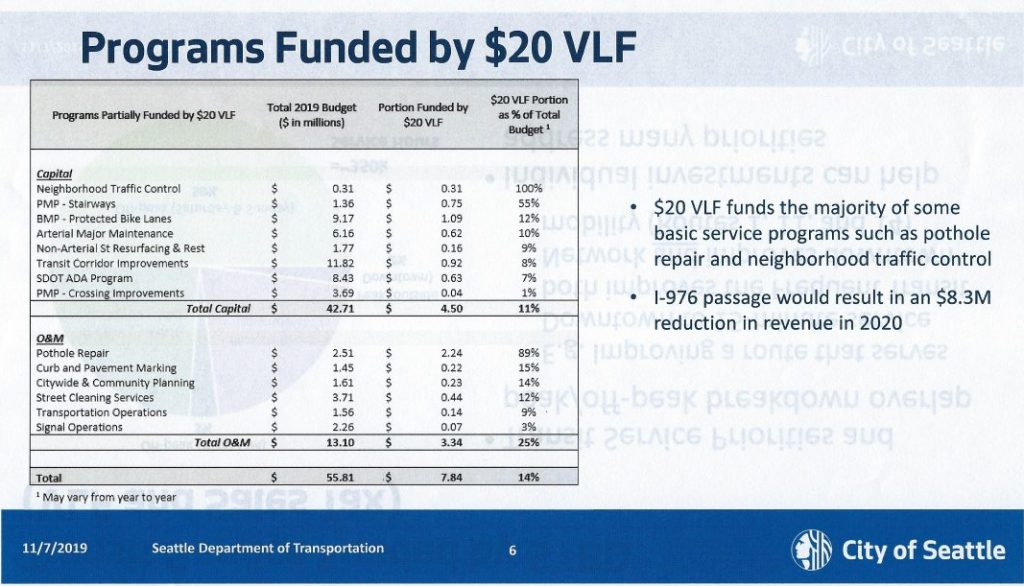 According to officials, the city is working on immediate, short-term, and long-term responses to the passage of I-976 and the $32 million budget hole it creates.

The most immediate action, announced today by Holmes, is a lawsuit to be filed next week challenging the constitutionality of the initiative. Even though the election results won’t be certified until the end of the month, it’s likely that next week, when the city meets with state officials and expect to be told that the state intends to stop collecting car-tab fees on behalf of the city, that will be a sufficient trigger to allow for a lawsuit. Holmes said that the case will be filed jointly with King County.

While Holmes was holding his cards close to his chest on the legal arguments he intends to make, he did note that there would be “three or four” claims, including that I-976 violates the single-subject rule since it does many things: it rolls back car tabs, changes the valuation calculation for vehicles, and also rescinds transportation benefit districts’ power to impose certain taxes and fees; Eyman’s attorneys will need to show that there is “rational unity” between those components and with the title of the initiative as it appeared on the ballot.  Holmes also hinted that he would argue that statewide initiatives should not be allowed to repeal local and regional voter-approved taxes and fees. Finally, he suggested that Eyman misled voters on the content of the initiative. Some of these issues, if the courts agree, are likely to lead to the entire initiative being thrown out; others, such as the jurisdictional question, might lead to only part of the initiative being invalidated. Nevertheless, Holmes is rushing to get the case in front of a judge in the hopes of getting a preliminary injunction in place quickly, to prevent the initiative from taking effect while the legal arguments play out over the months to come.

On the heels of that effort, the City Council and the Mayor’s Office need to decide how to budget for 2020. “I’m sticking with the budget that we have,” said Council budget chair Sally Bagshaw, who unveiled her initial balancing package yesterday. “I’m not touching transportation. I’m going forward with my balanced budget… And if we have to address it, it’ll be in January with the supplemental budget,” referring to the quarterly adjustments that the Council makes to its approved budget throughout the year. “We’re passing a budget on November 25th.”

SDOT Director Sam Zimbabwe and the Mayor’s staff are already thinking through plans for how to address the $32 million potential hole in the budget. Even if Holmes is unsuccessful in getting an injunction, the city has a few months to sort things out: the Seattle Transportation Benefit District has a $20 million reserve fund, which was intended to be used to gently ramp down funding if the STBD isn’t renewed (it expires on December 31, 2020). That’s also convenient because under its agreement with Metro, the STBD is only allowed to make changes to its “purchase” of additional bus service twice a year (March and September). $20 million is more than enough to cover the first three months of next year, and is nearly enough to get through the end of the Benefit District term. The $20 car tab fee also has a reserve of about $3 million which could be spent down, leaving about $5 million — possibly redirected from the Mercer Megablock sale proceeds — to be backfilled.

That would give the city most of a year to deal with the long-term issue, making other plans for 2021 and beyond: cutting services, projects and maintenance, finding other ongoing revenue sources, or some combination of the two. Central to that will be proposing a renewal to the Transportation Benefit District, though if I-976 survives the legal challenge then the new benefit district won’t have the authority to impose a car-tab fee and will need to find a replacement source of funds. In today’s press conference, Zimbabwe was unwilling to speculate as to what revenue sources — or how much — might be tapped in a proposed STBD renewal, though he did say that there are “lots of options.”

Zimbabwe said that his department is already making plans for cutbacks to services and programs as soon as March, assuming I-976 isn’t blocked by the courts. He highlighted a set of principles for decided what cuts would be made, emphasizing the city’s Race and Social Justice Initiative while also prioritizing mobility downtown. 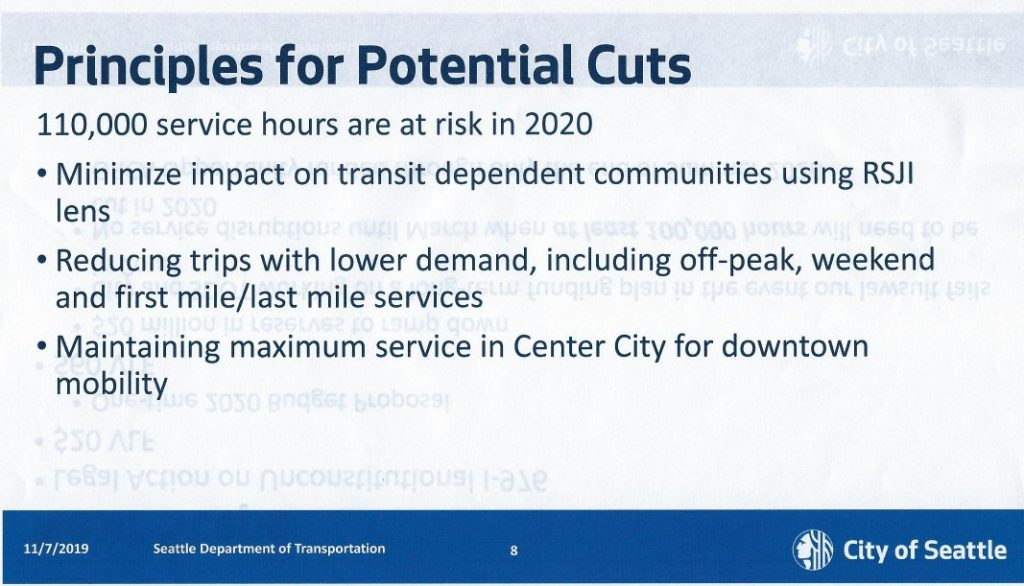 In an interview this afternoon, Bagshaw suggested another potential long-term source of replacement revenues: an unearned income tax. “We think that that can raise a lot of money,” she said. “My lawyers have told me, ‘just cool your jets on that, we’ve got to figure out what we’re doing with the income tax as proposed.’ But I think that this unearned income tax is something that would be perceived as being naturally progressive, that there’s money to be had, it’s constitutional based upon everything that we’ve learned, and I think that’s something that we can go after. I don’t like it, but you know, we’re looking at everything right now.”

Never one to miss an opportunity to make a scene, I-976 promoter Tim Eyman showed up fifteen minutes before the Mayor’s press conference was scheduled to begin, to speak to waiting press (with props, of course) and to try to crash the press conference. He was successful at the first, but not the second: the Mayor’s staff escorted reporters through a side entrance to the conference room, leaving Eyman alone in the lobby.  Eyman rambled on to the press for several minutes, reciting the history of his prior initiatives that had been tossed out by the courts.